First, we’ll need to address the elephant in the room: DuPont State Forest is located in North Carolina, which seems not to be in South Carolina, as implied by the “SC” in this post title and category. Yes, I am aware of this.

I stayed at work until the early evening Friday night strategizing, so when I got home and finished dinner, it was time to plan my hikes for the weekend. Saturday promised another day in the 90s (each day since I’ve been here has reached above 90), but with a line of storms coming through promising a break in the heat. These storms were potentially severe, so I scratched the hike I currently had at the top of my list (Table Rock), since I didn’t want to be on a mountain summit when an electrical storm started. I’m smart like that, but only sometimes.

The DuPont State Forest had come up in my searches a few times, and had also been mentioned by a coworker as a must-do, so I conducted some internet wizardry, and came across a page with a suggested hike across several trails that sounded great (“Waterfall Tour”? Hello!). I got all my gear together and went to bed early so I could hopefully get many miles in before any storms arrived.

I actually got out the door before eight (not bad for a Saturday), without the snacks that I had taken the time to prepare the night before (I realized this about 10 miles into North Carolina). The route to DuPont takes you right up 276 over Caesar’s Head – the same drive I loved two weekends ago. Though the park wasn’t technically open when I reached the visitor center, the gates were open and I drove to the overlook, hoping to catch a smoky view that I had glimpsed through the trees while driving up the mountain. It was indeed waiting for me. 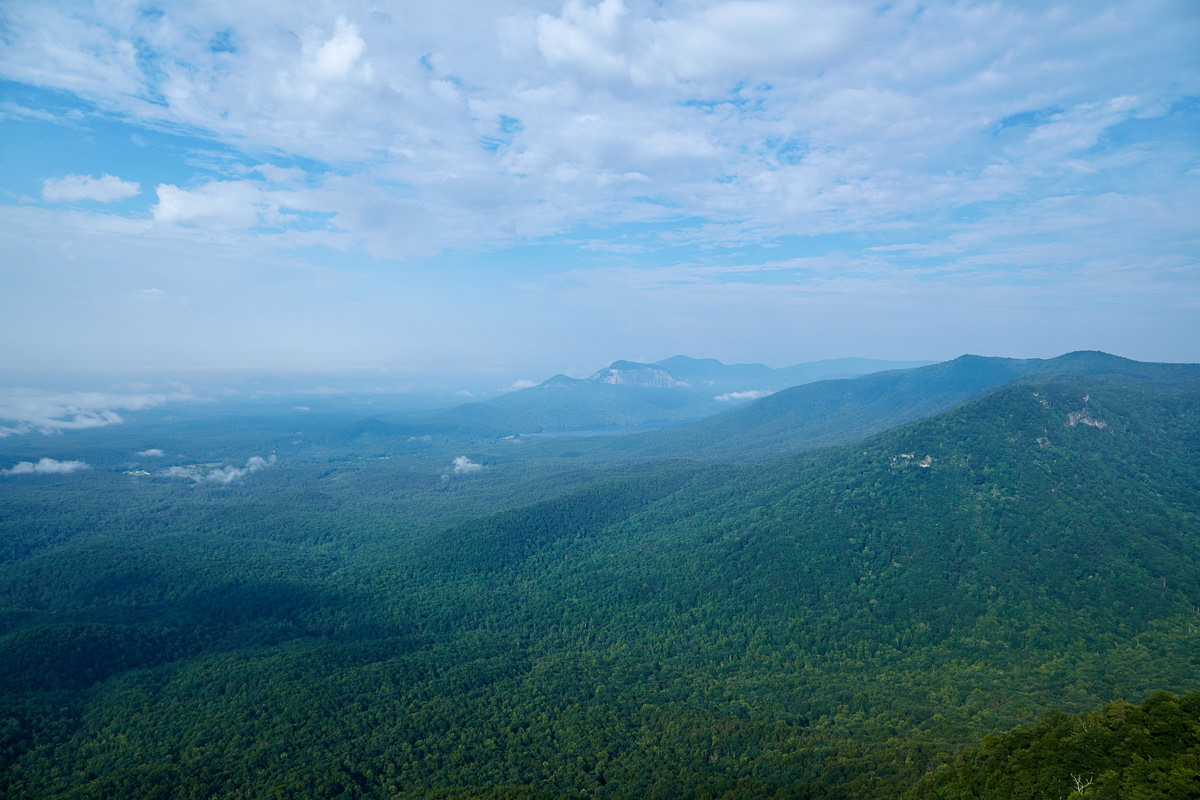 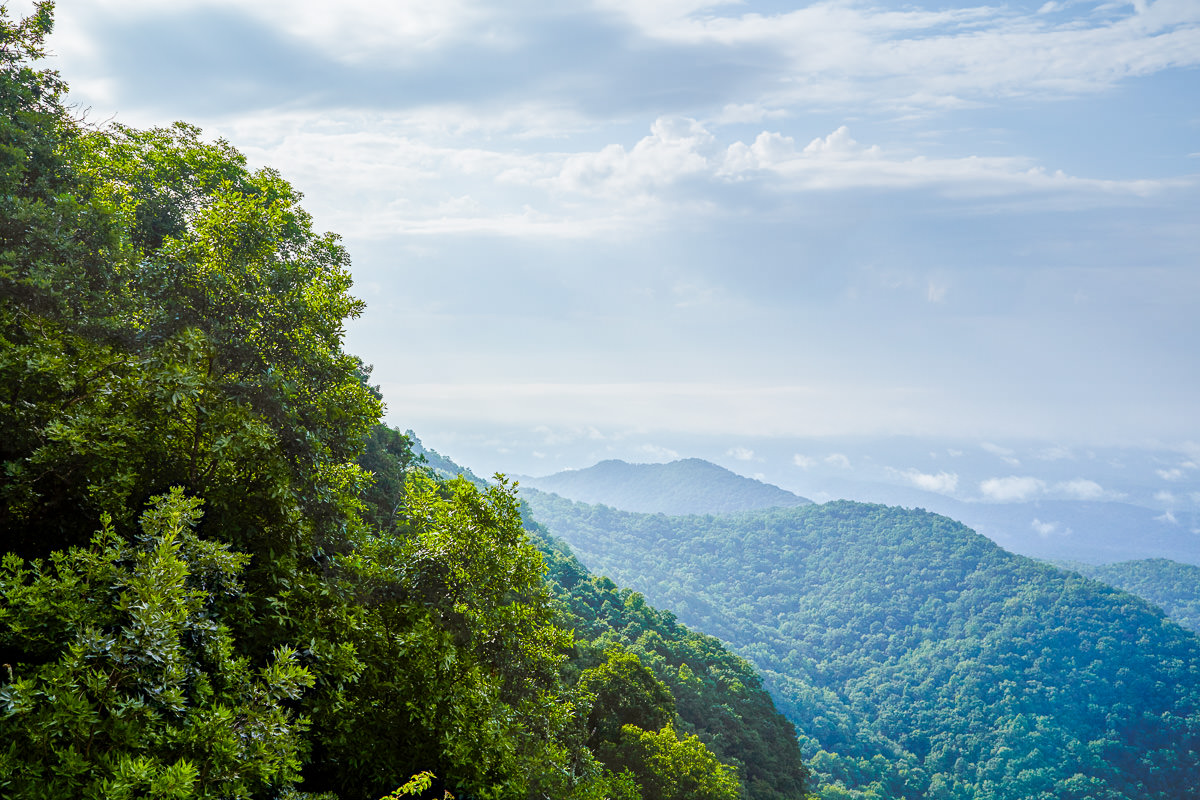 See, two of the pictures were actually taken in South Carolina! Note that you can barely see Table Rock through the fog in the first picture, which is quite a bit different than my last visit. I hopped in the car and headed back northward, quickly crossing the state line into North Carolina, then turning onto Cascade Lake Road and Staton Road to easily find the Hooker Falls parking area.

It was a short easy hike out to Hooker Falls from the parking area. 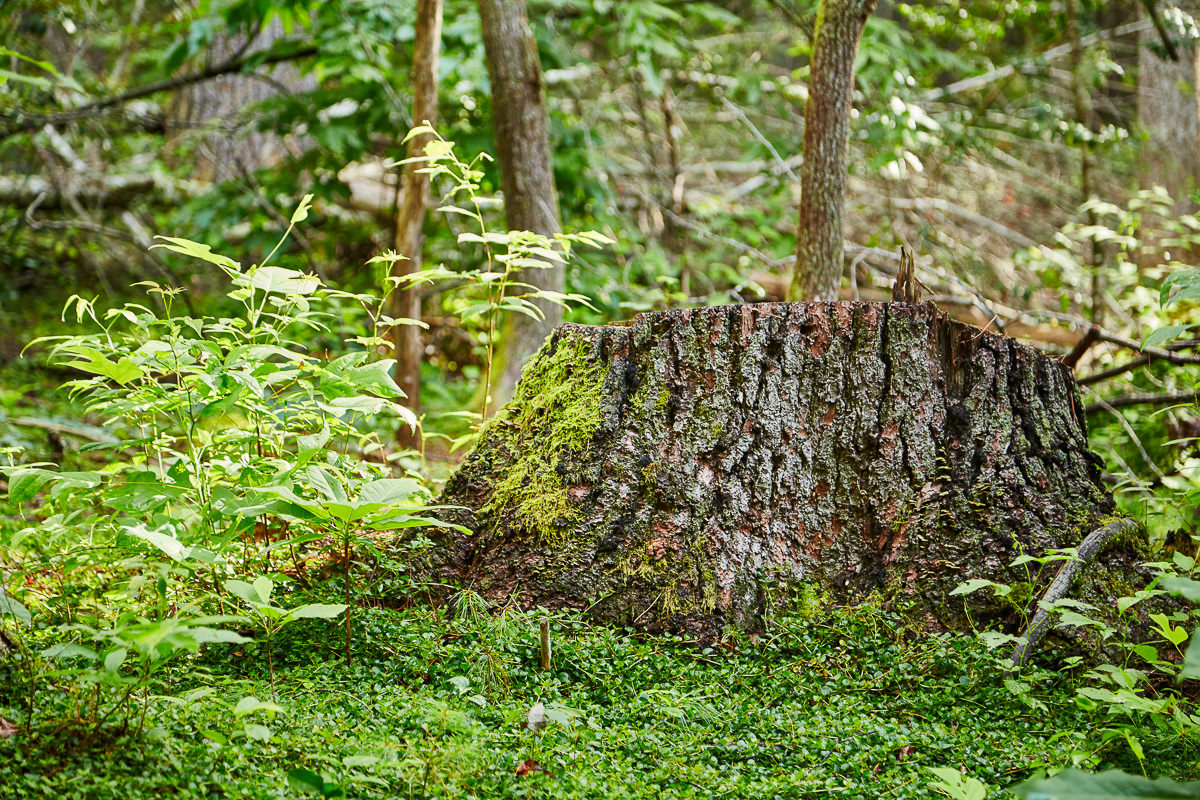 You first arrive at an overlook, then hike past the falls to return along the river’s edge to the bottom of the falls. When I arrived, there was one other guy there (with a tripod – whoop whoop!), but the place was quickly flooded with a large group of kids hopping right in for a swim. 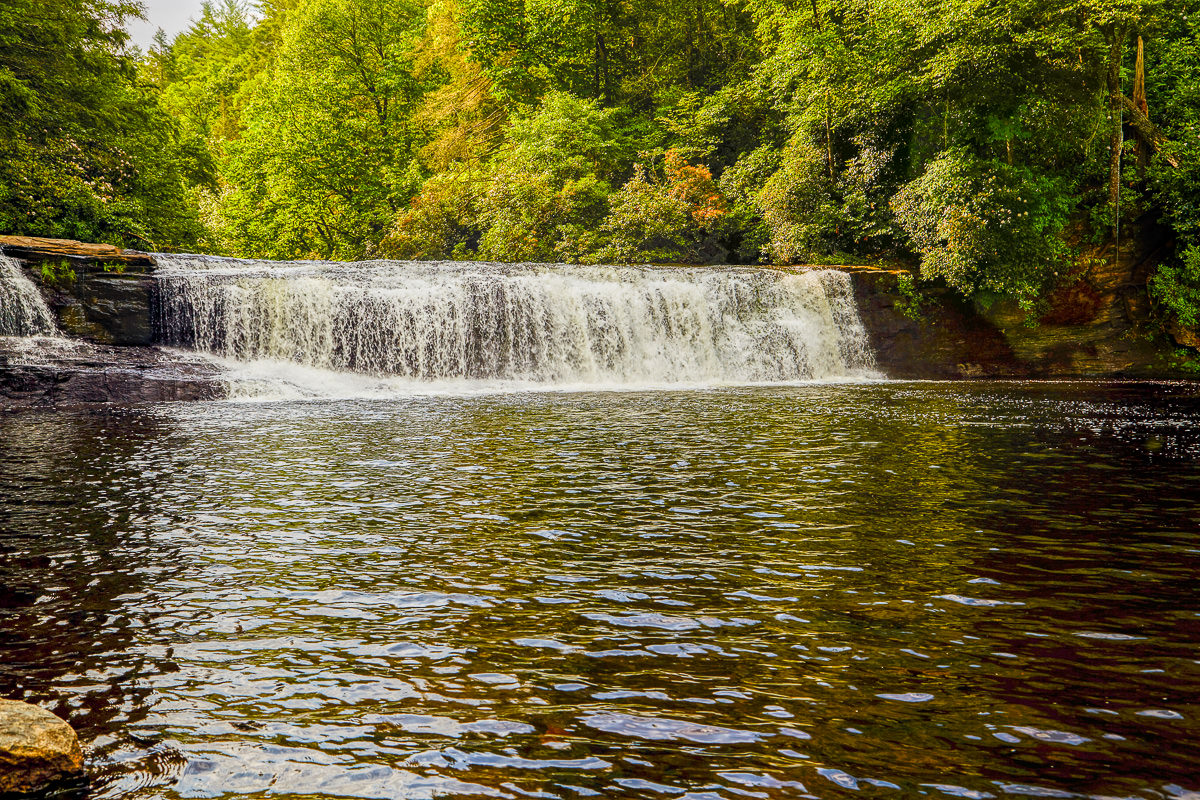 From there, I backtracked back to the parking area, took the bridge across Little River and crossed under Staton Road to continue my waterfall tour. 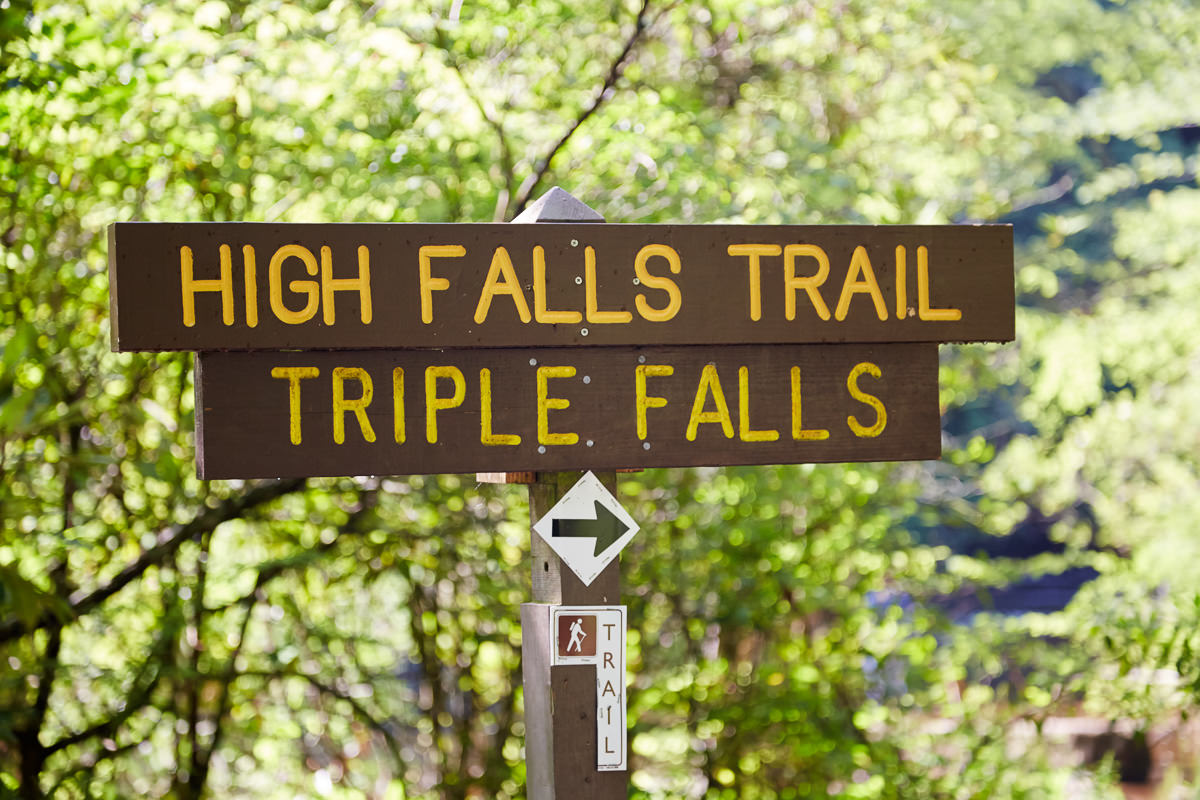 This trail follows the river, which is fairly wide and shallow at this point, but the riverbed seems to be entirely rock – large boulders that looked pretty slick, but people were fishing standing in the water in tennis shoes, so I guess it couldn’t have been that bad. There were a couple of them just outside the right side of this frame: 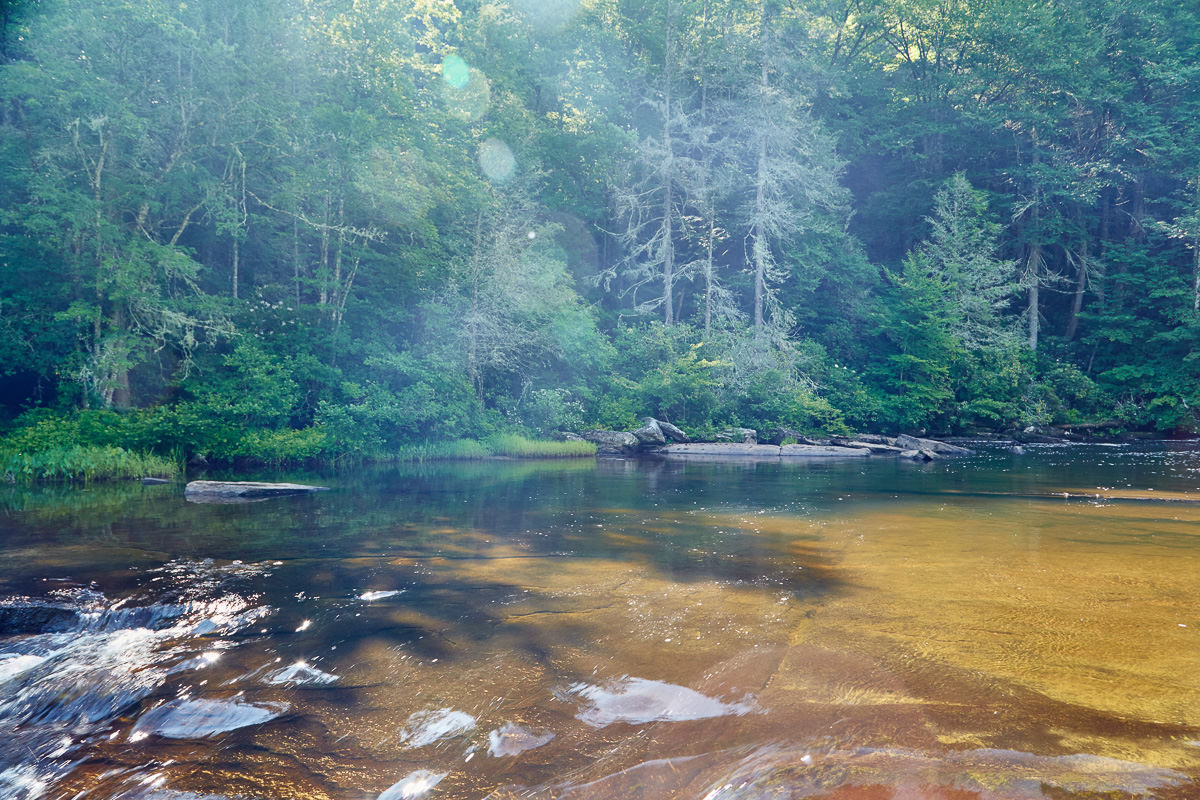 From there, the trail starts to climb as you hike alongside Triple Falls. The first glimpse of the three-tier falls comes via a trailside overlook: 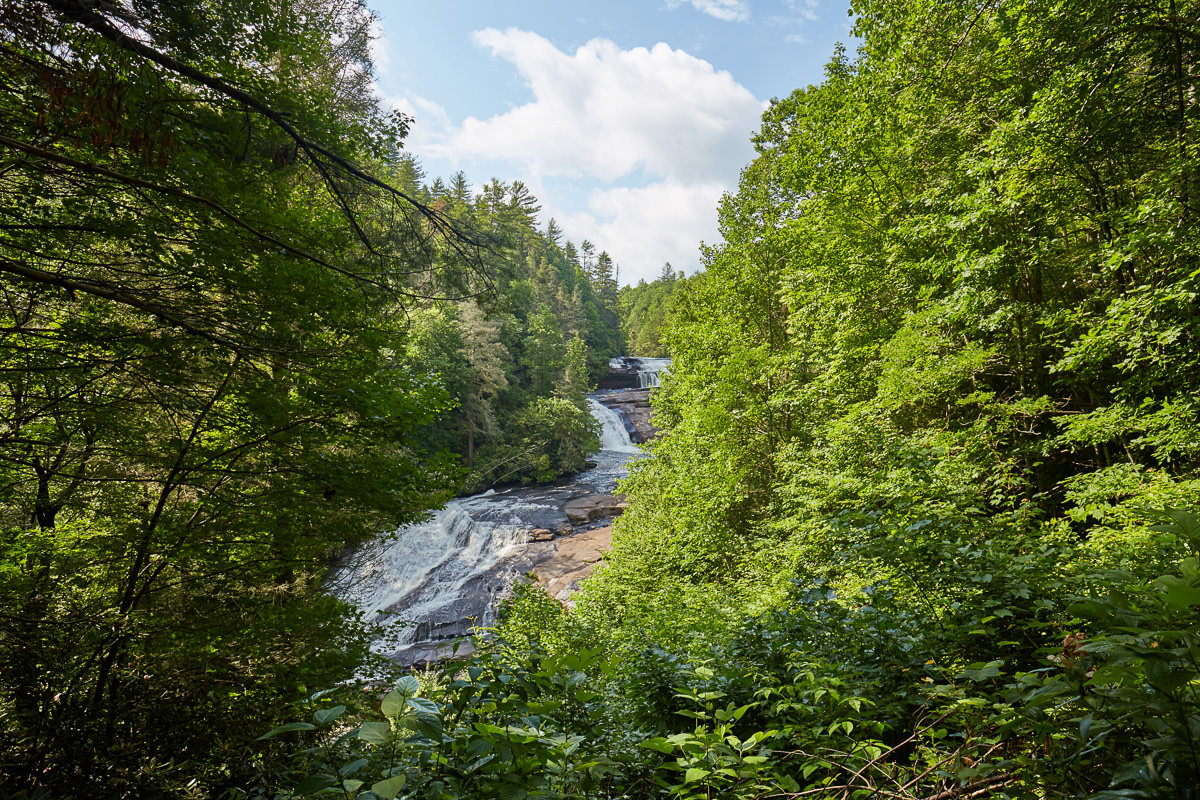 A few minutes uphill from this spot, there is a set of stairs (real stairs, not rocks) leading down to the area above the lower falls and immediately below the middle falls. I imagine the river was at an average size based on the amount of rainfall we’ve had lately, and there was a lot of open rock to walk around on in this area. The water would have to get a lot higher before you’d have problems. 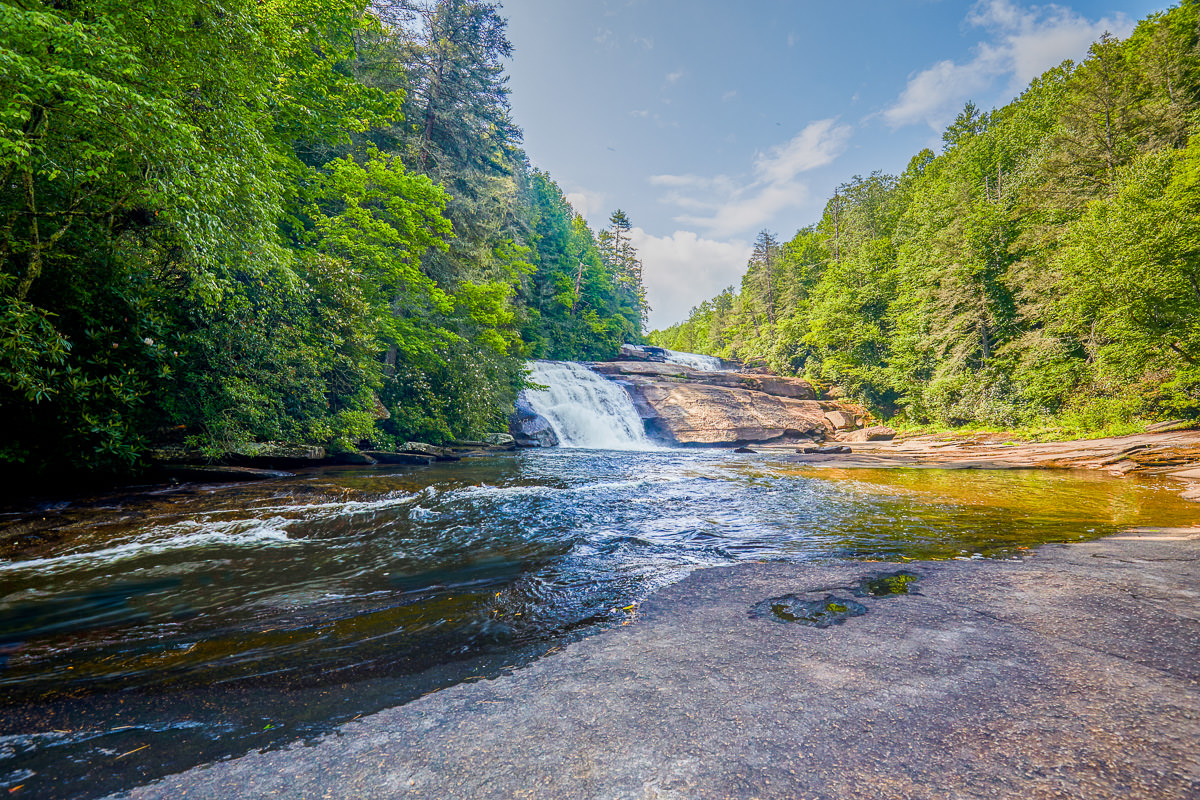 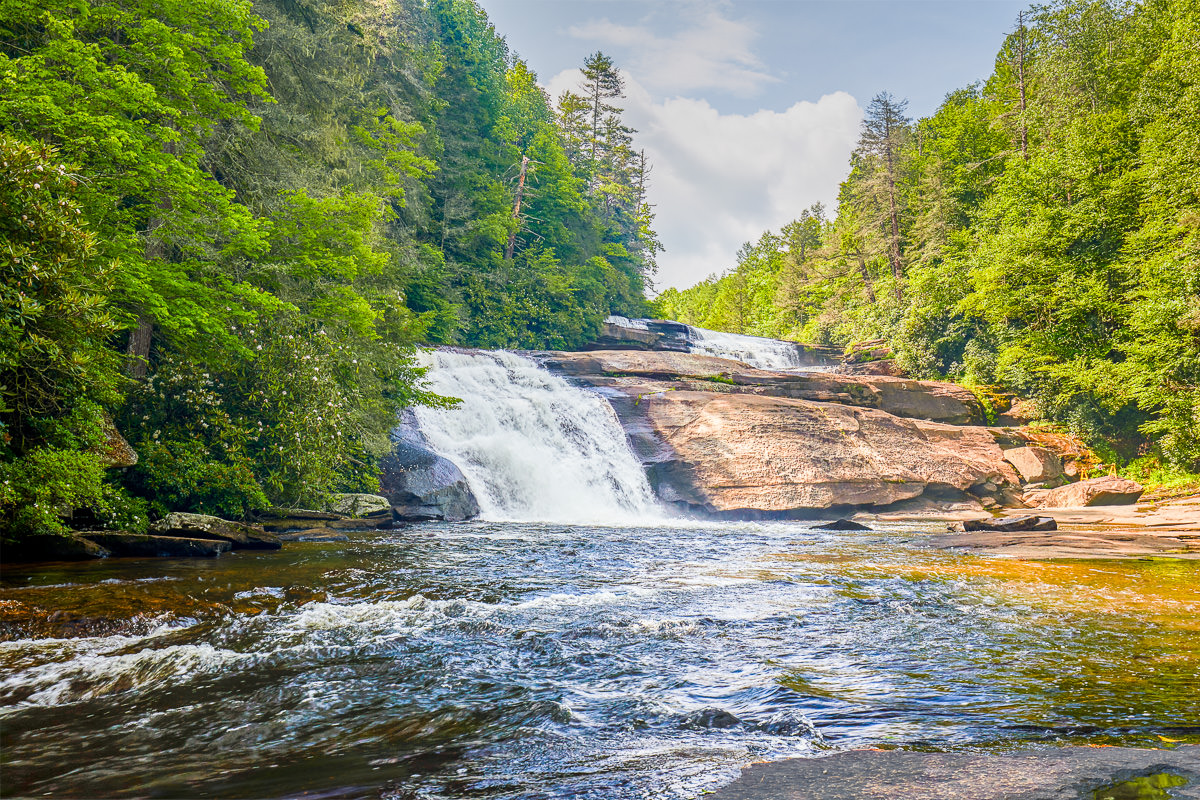 This shot is looking back down over the lower falls: 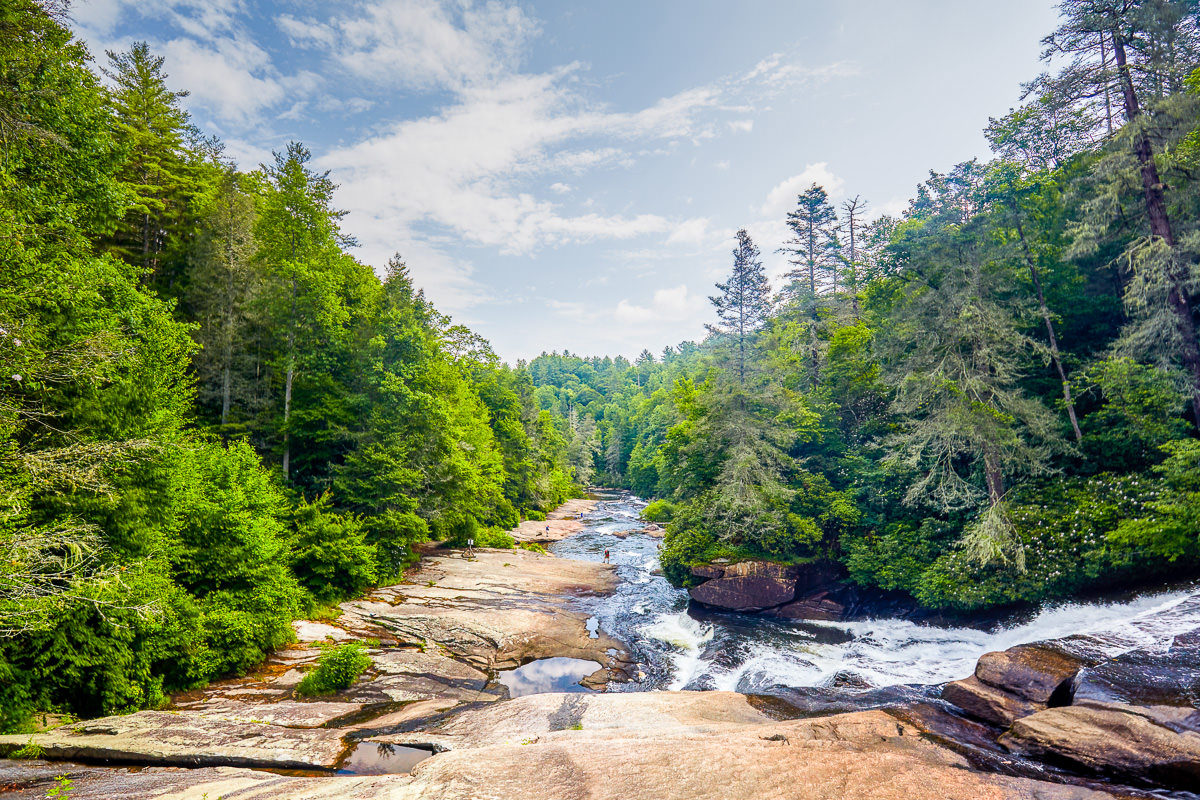 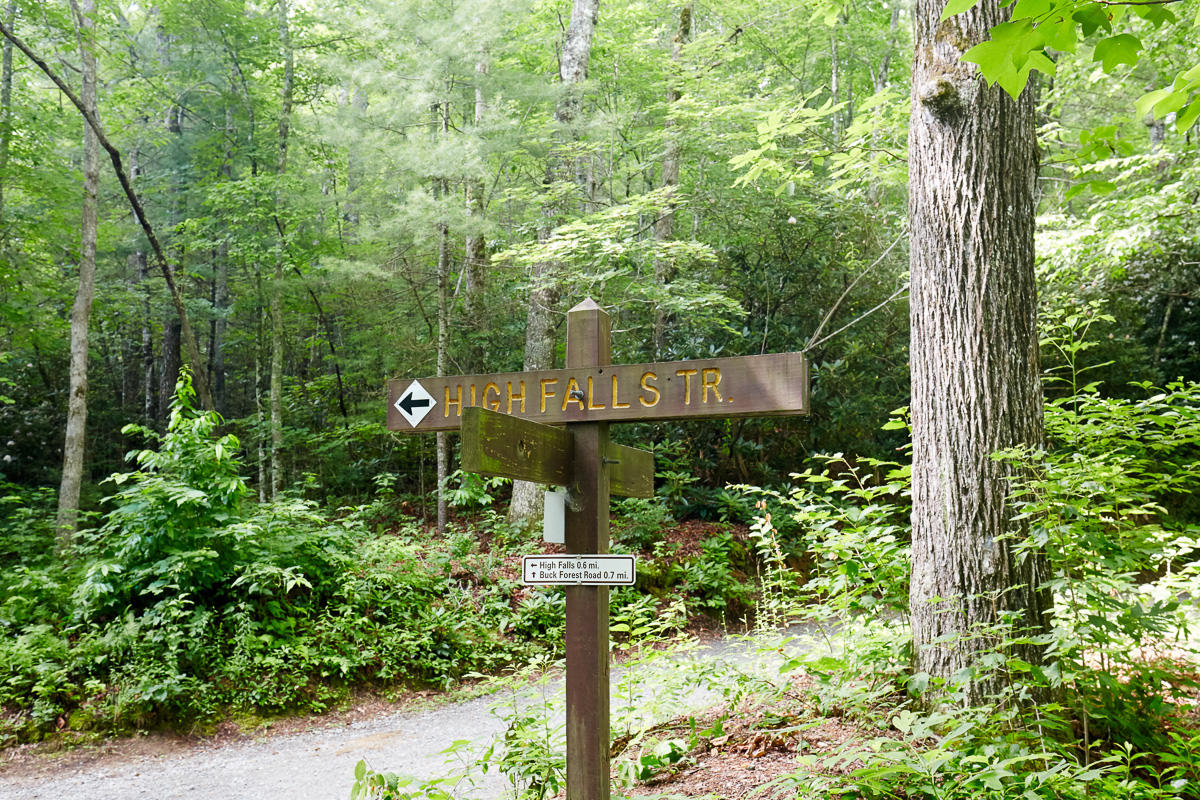 From there, back up the stairs and then further uphill towards High Falls. After walking for a few minutes, a flat trail stays left taking you to the base of High Falls – this trail is quite nice and serene, along the river with a nice canopy for shade. 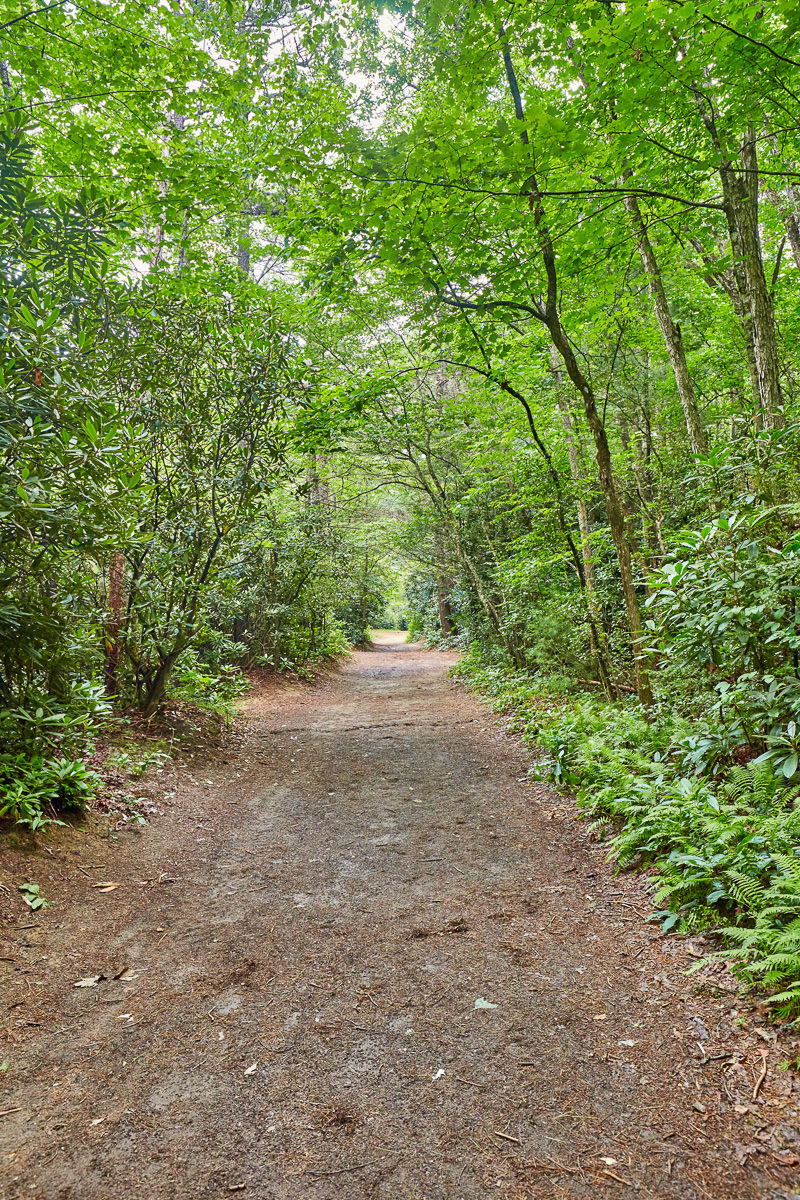 A few minutes later, you’re asked to tie up your horses for the rest of the short trail. As I had no horses, I moved on after a few minutes of trying to tie up nothing. Pick your way along large rocks at the river’s edge to make it all the way to the base of the falls, and if you’re crazy and wearing life jackets with helmets, go for a swim. See them all sitting on the rock in the first picture? In the second, some of them have swum across and are literally standing where the water lands from the falls. 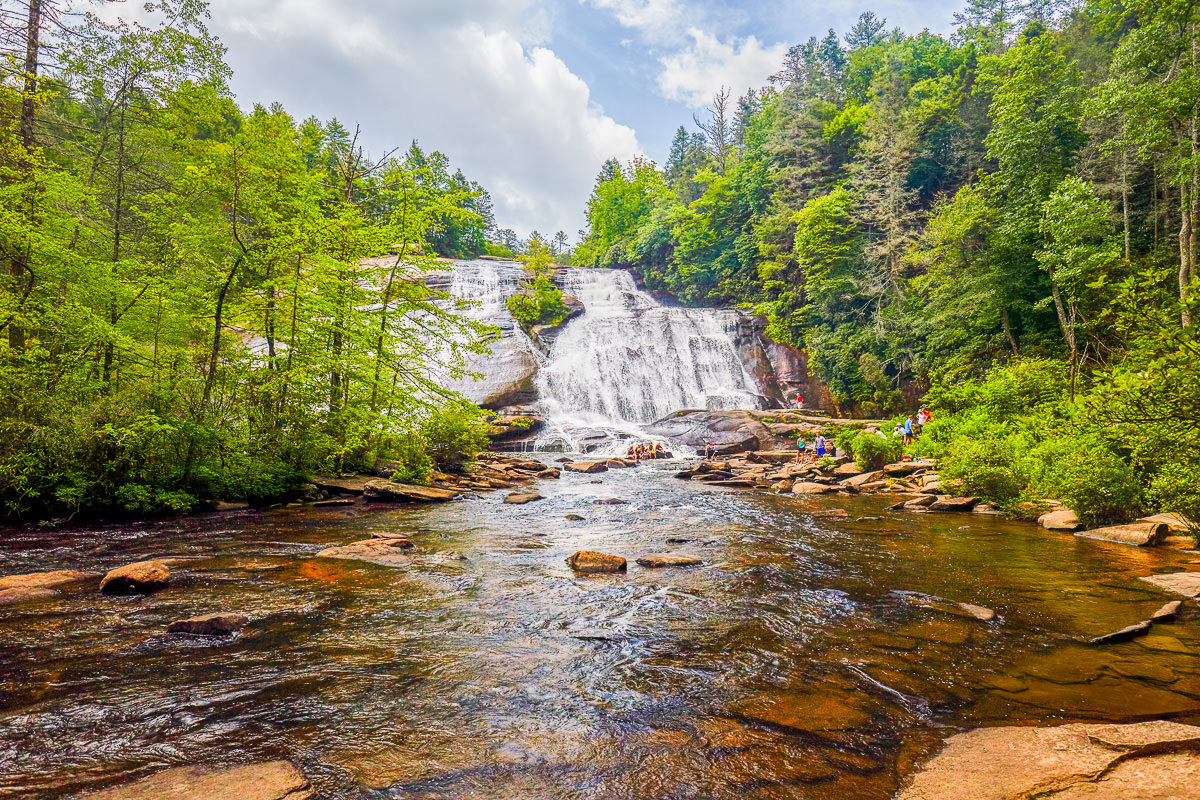 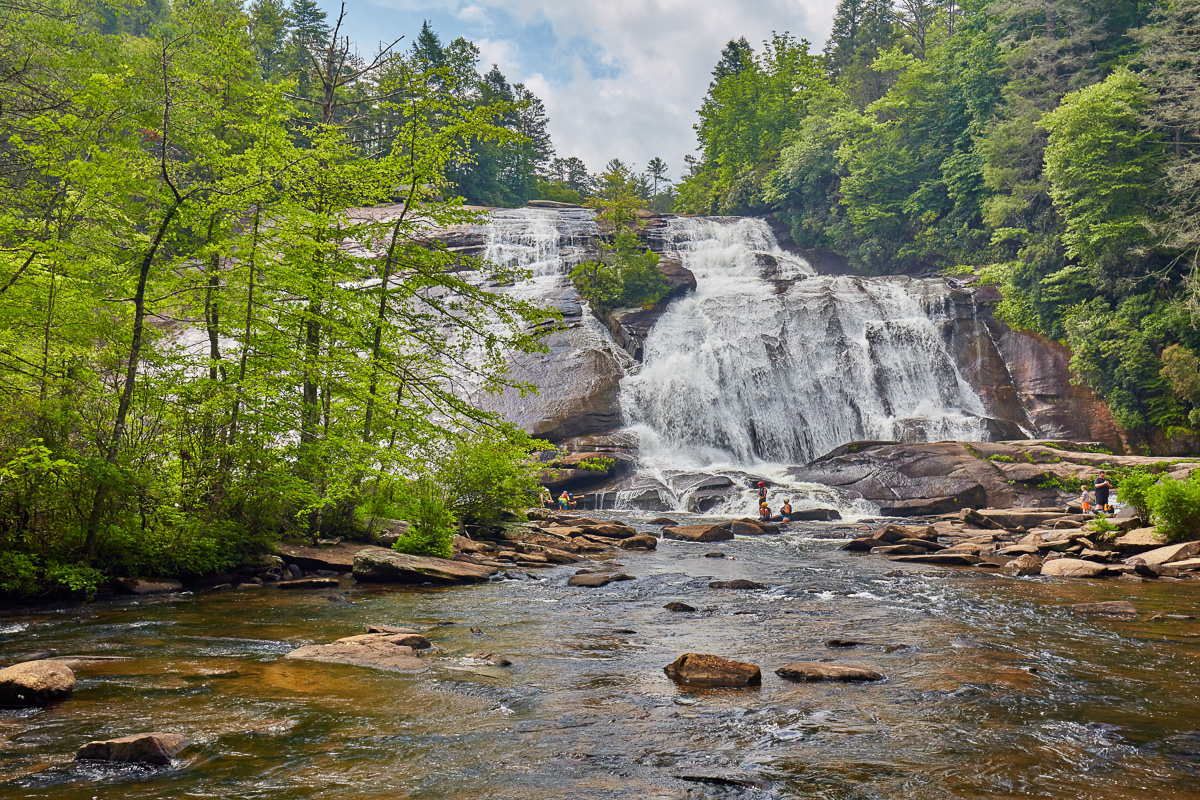 From here, you backtrack the flat trail and then head uphill to find the top of the falls. After a short climb, you’re greeted with an overlook view opposite the falls, and you may notice that there is a covered bridge above the falls – I could not see it at all from below. 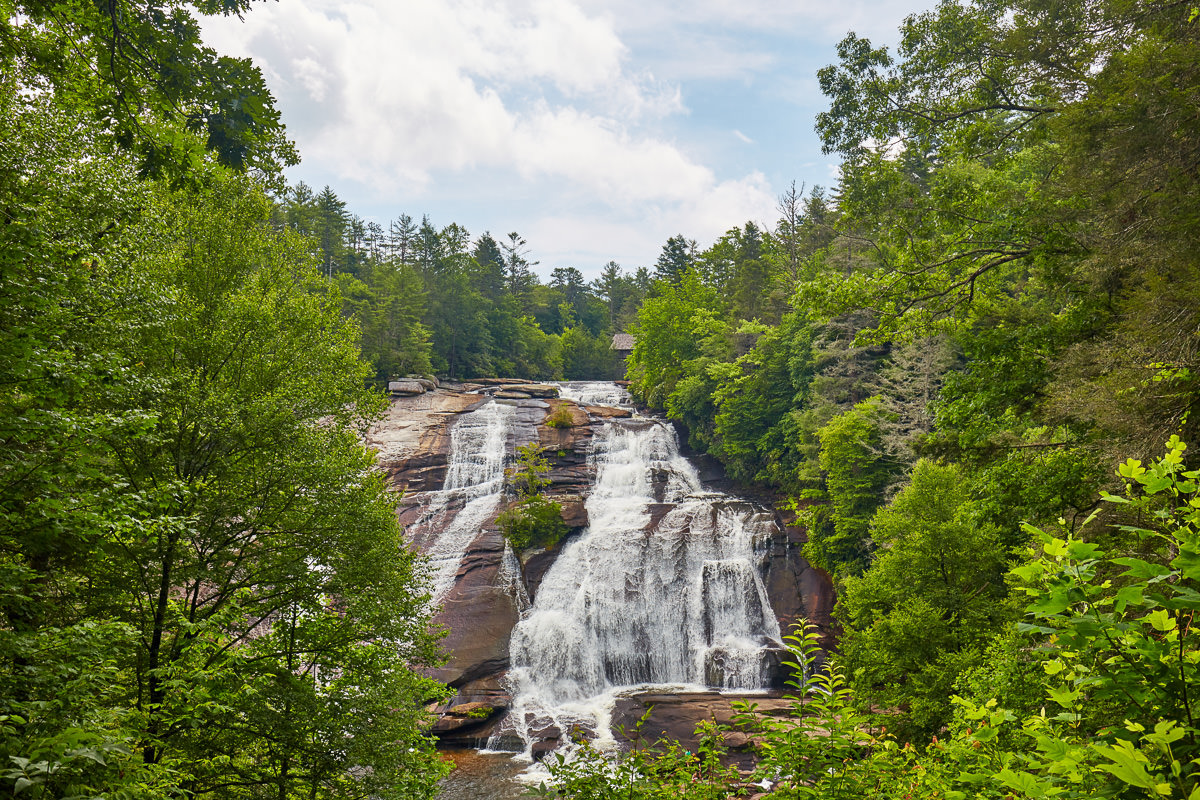 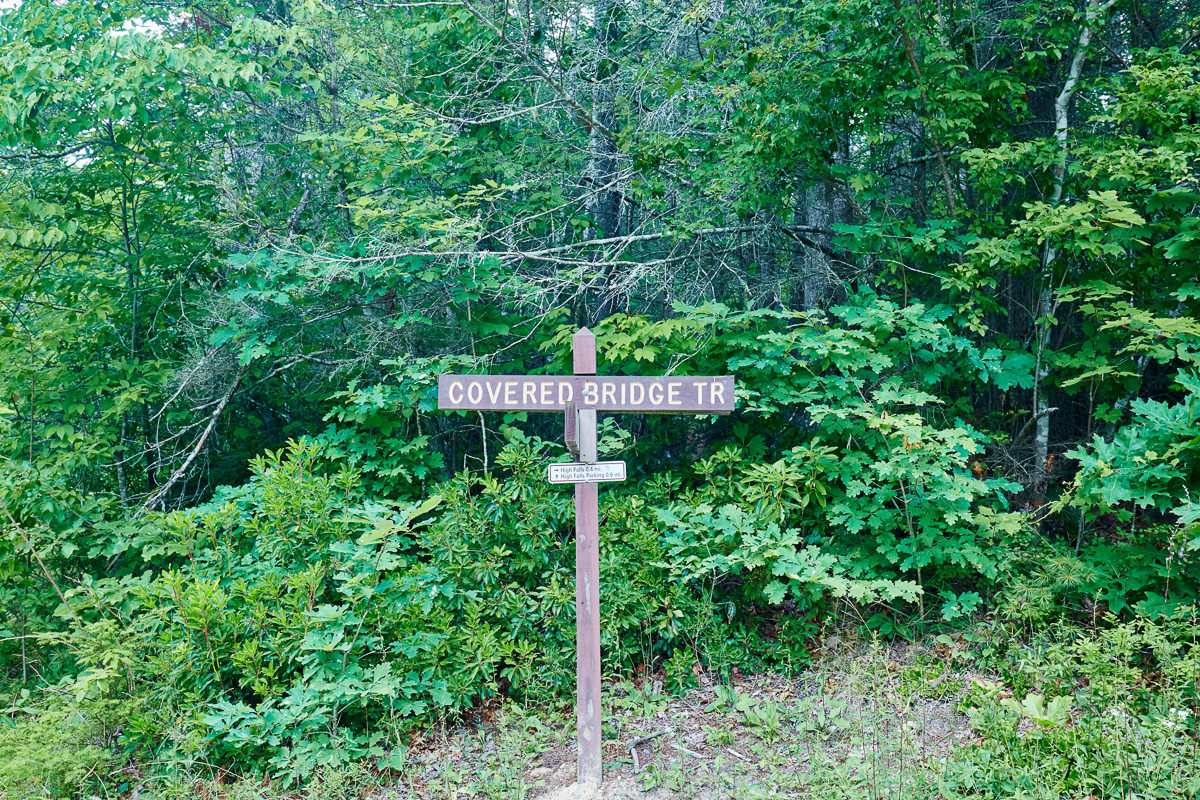 I have no idea the story behind this bridge, and during the two times I passed over it, I saw all of these things cross it:

It is quite lovely though, and is very nearly at the top of High Falls, with just a short stretch of river between the bridge and the 150′ tall waterfall. 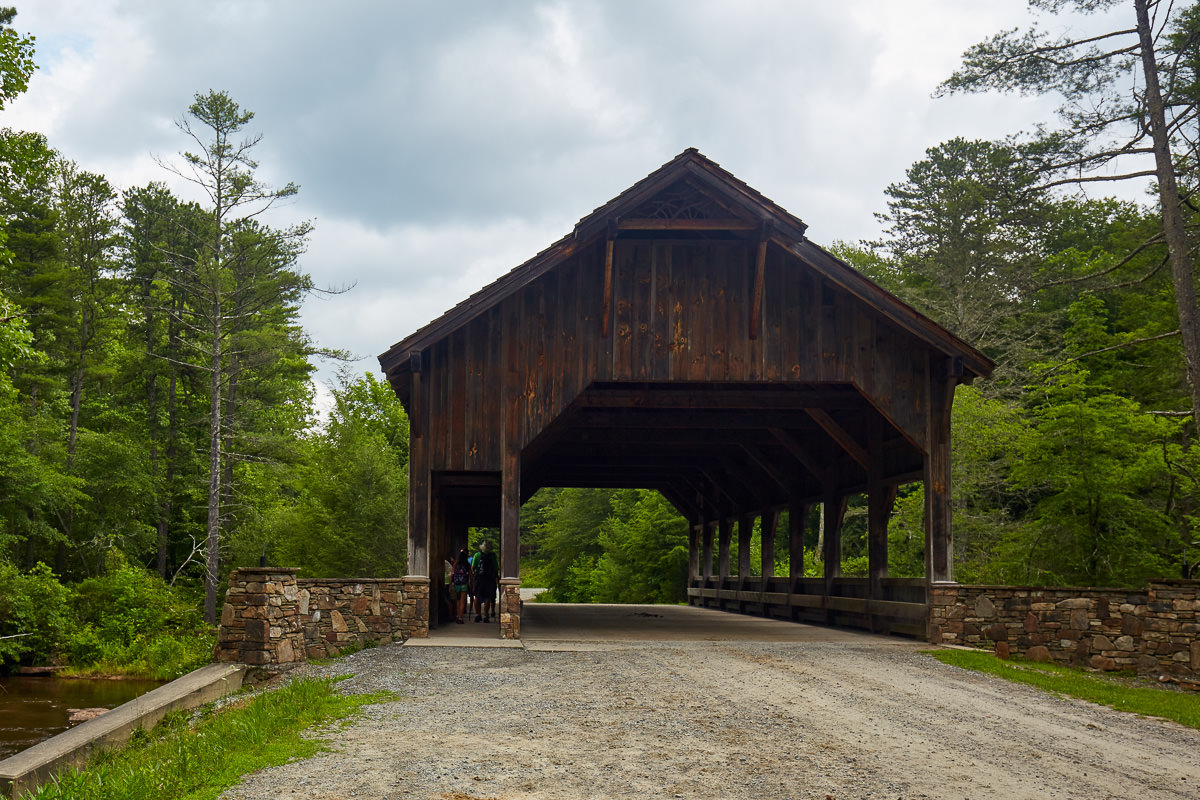 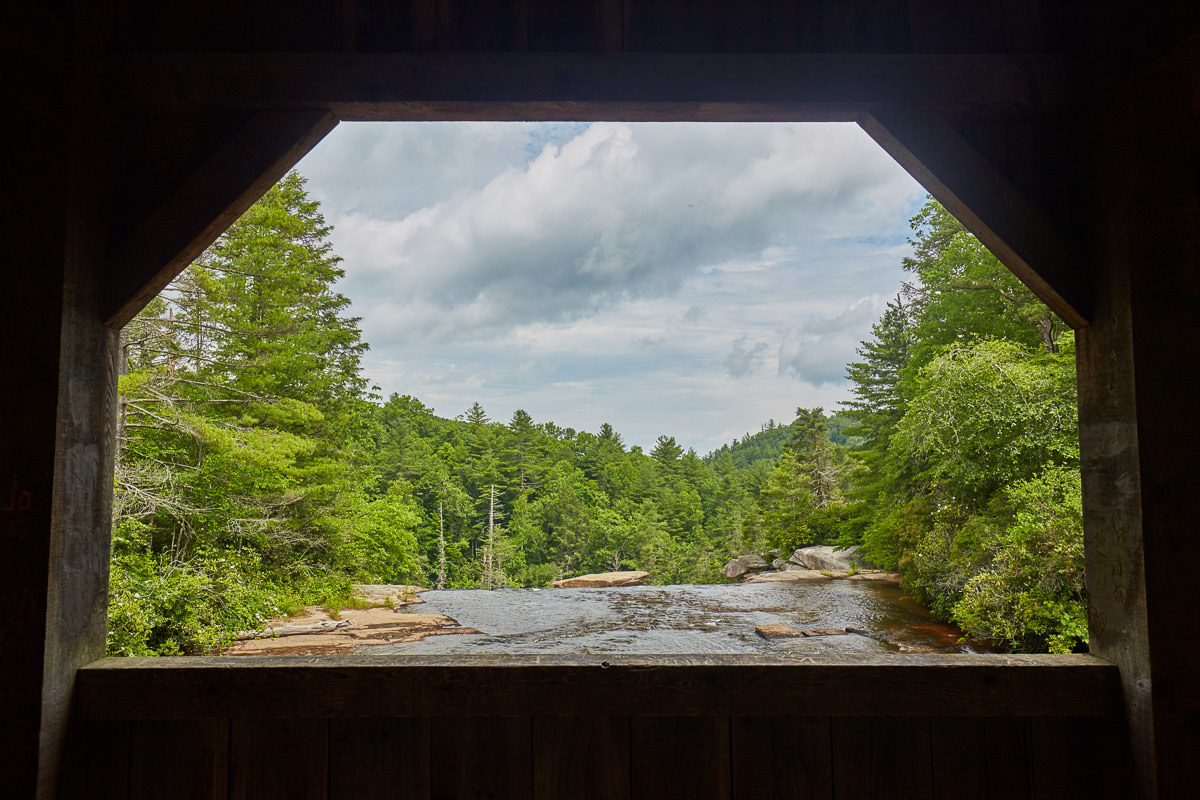 Continued Trail Hiking Without Much Description 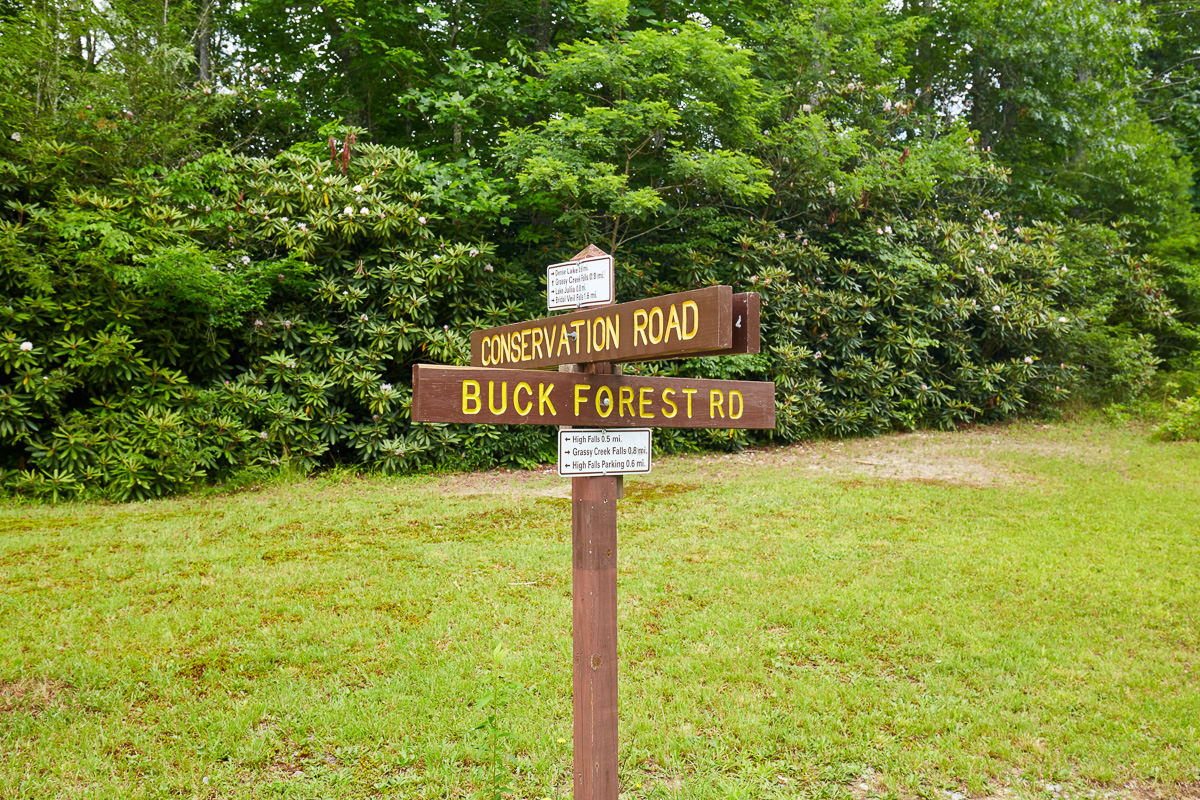 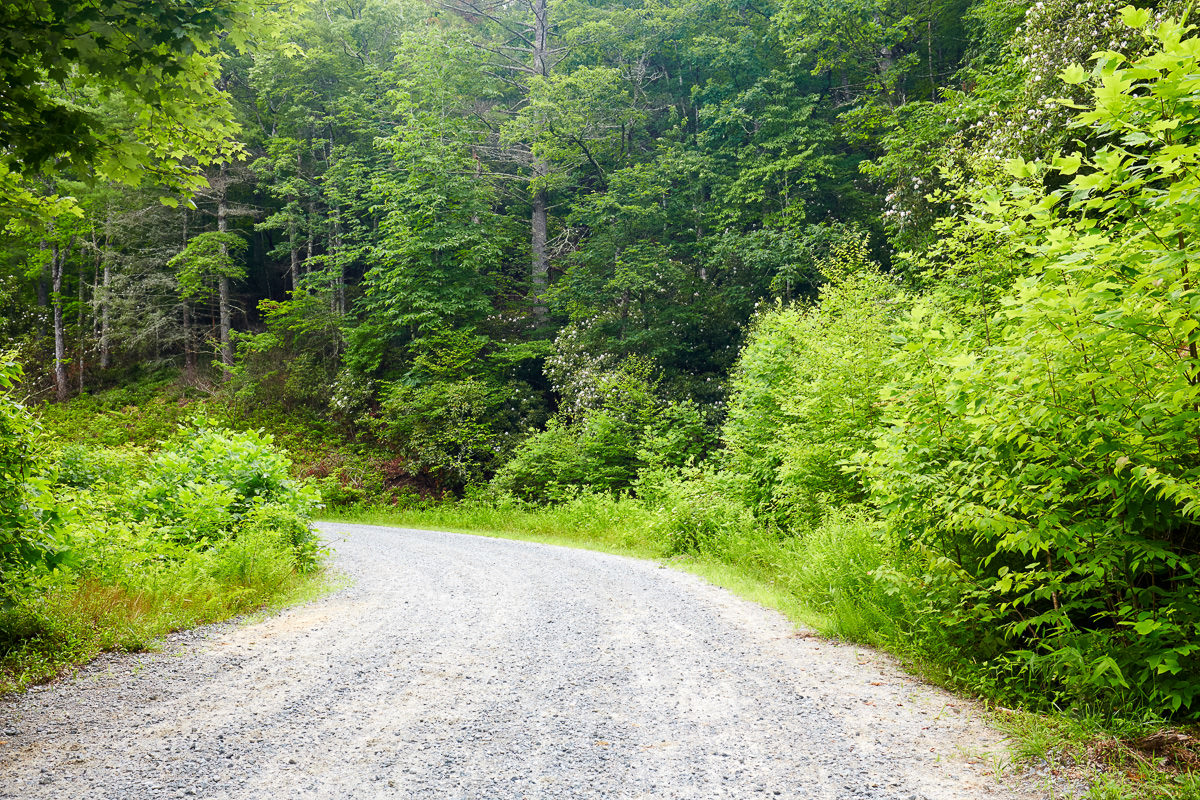 I will pause here for a moment to call out something in the middle of this second photo above: flowers. They’re somewhat hard to see here (I did not bring a long lens today), but trees have flowers down here. It’s awesome and adds to the scenery – I’m not talking flowering like fruit trees, I’m talking forest-size trees with gigantic flowers. I love it here. 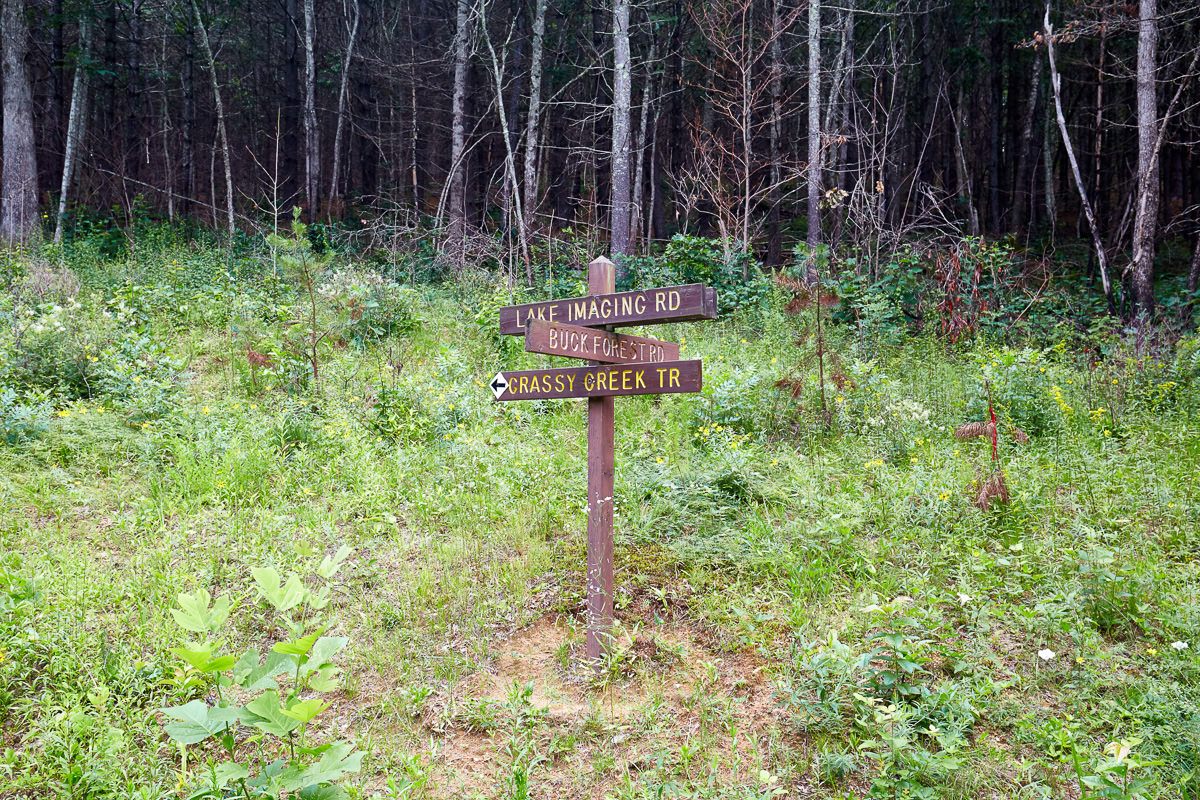 From the main trail, this is a short downhill hike to the middle of a long sliding waterfall – more slide than fall, with a large pool at the bottom. It was a very peaceful spot to enjoy the water whooshing by. I spent about twenty minutes here taking pictures and just enjoying being alive. 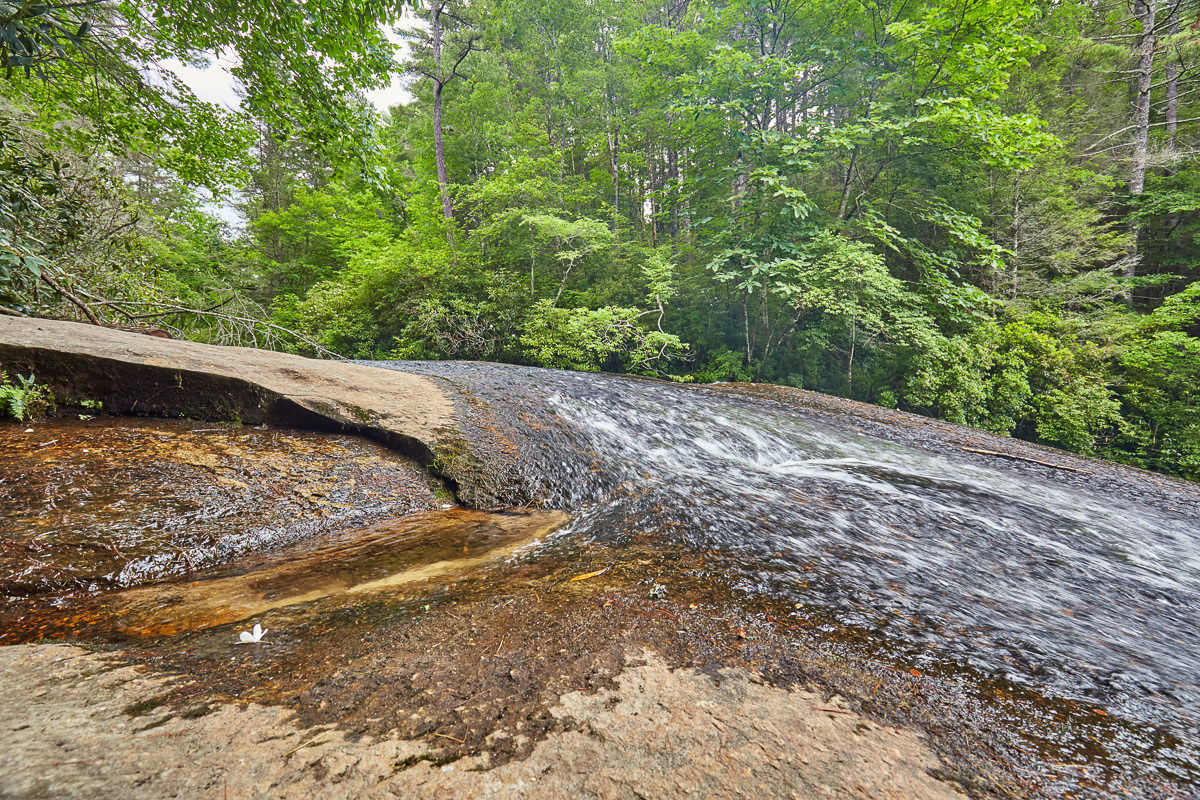 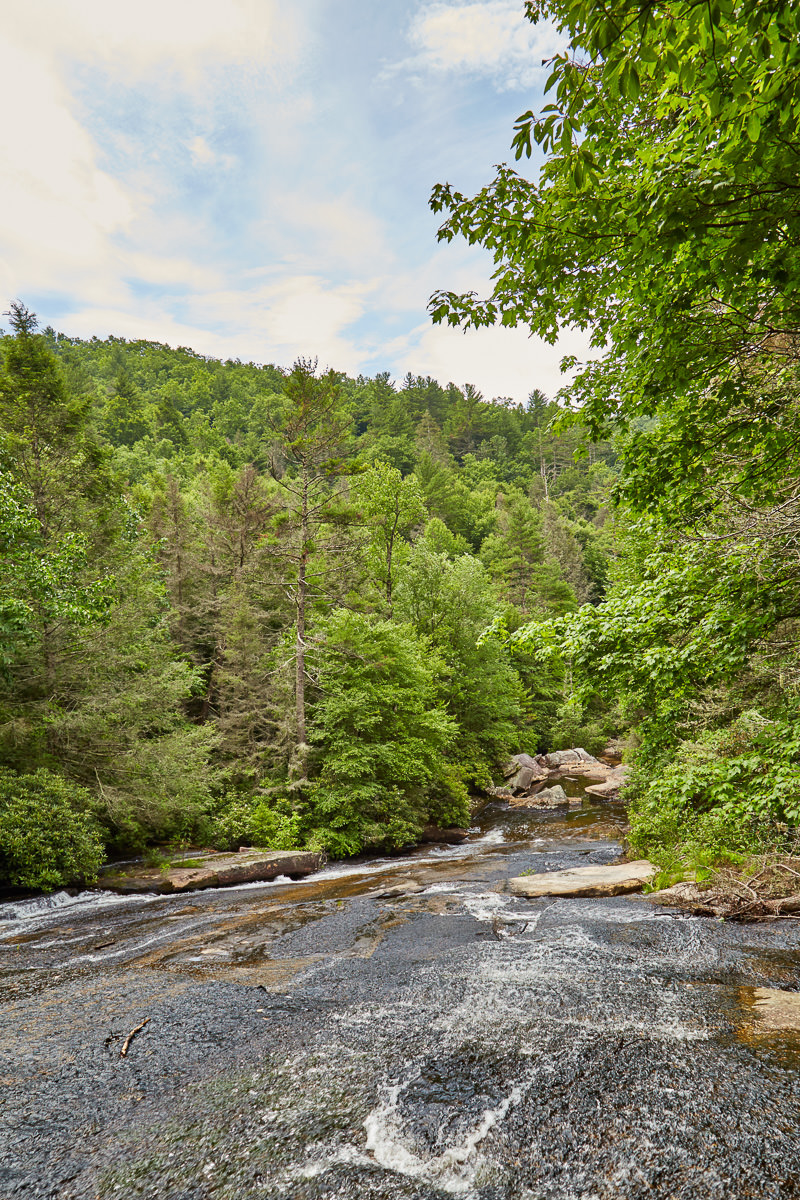 And that’s when I heard the first clap of thunder. I packed up and started backtracking to the car, with the sky ever darkening. 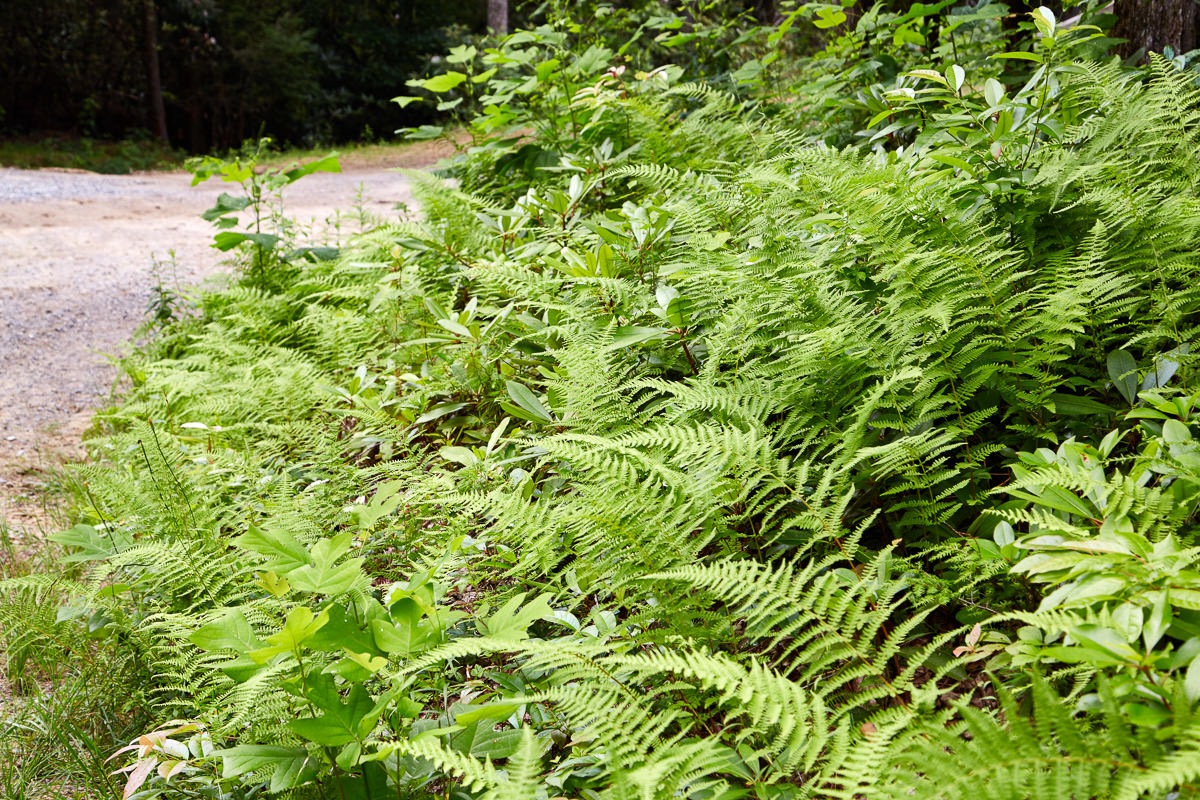 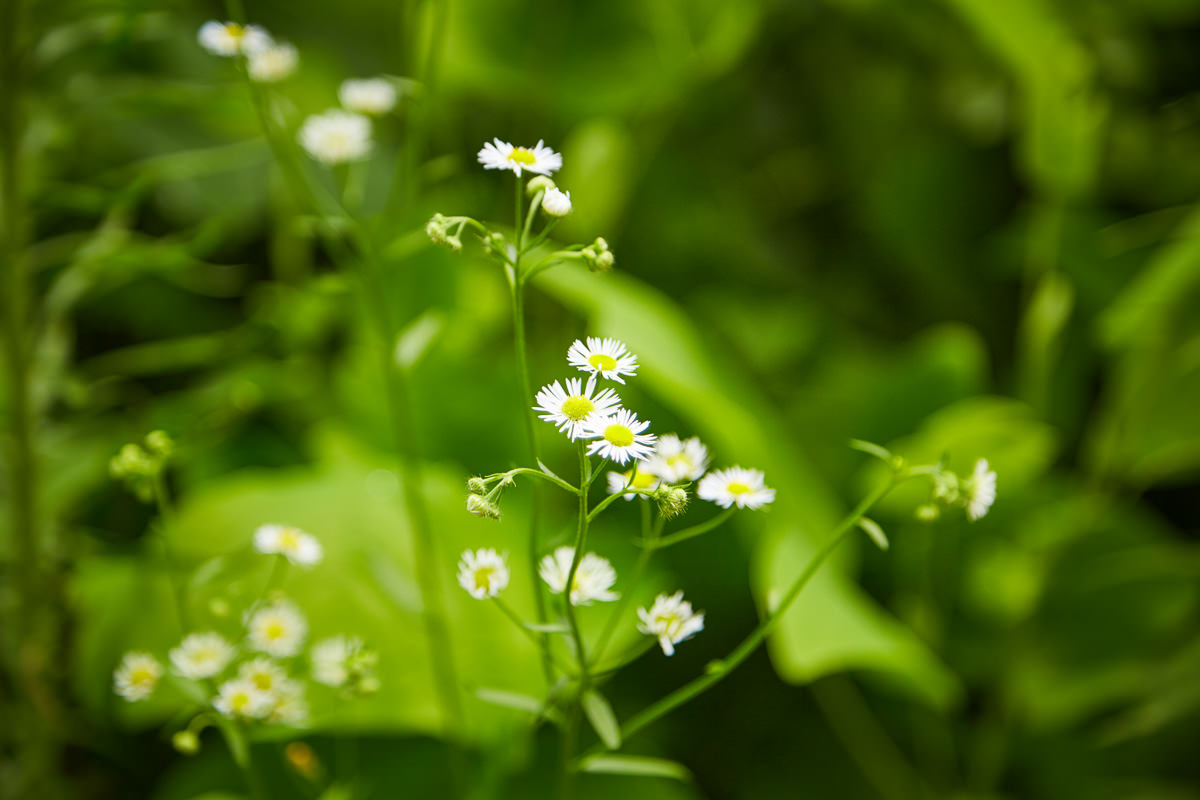 By the time I made it back to the bridge, the sky was quite angry indeed and I suspected it would not be long until I was soaked. Well, soaked-er, since it was hot and super-humid again. I packed everything in the backpack and put on the rain cover for only the second time ever (first time). 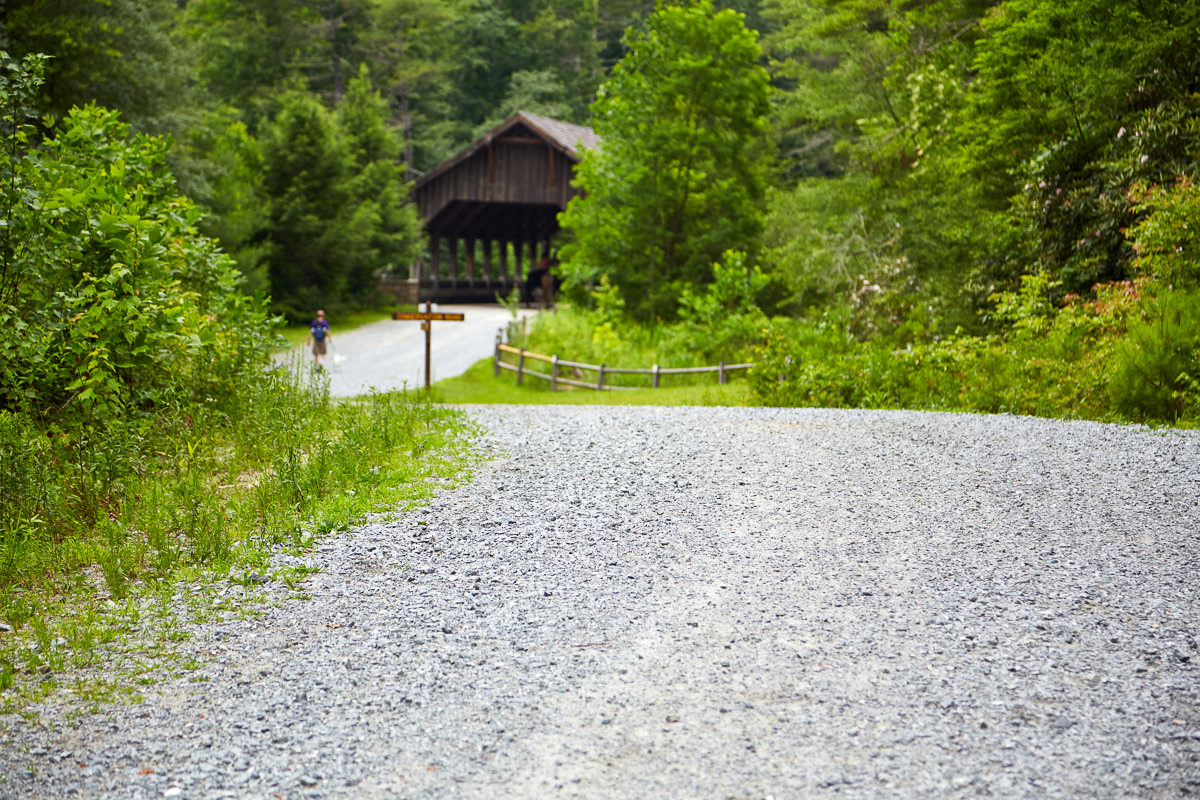 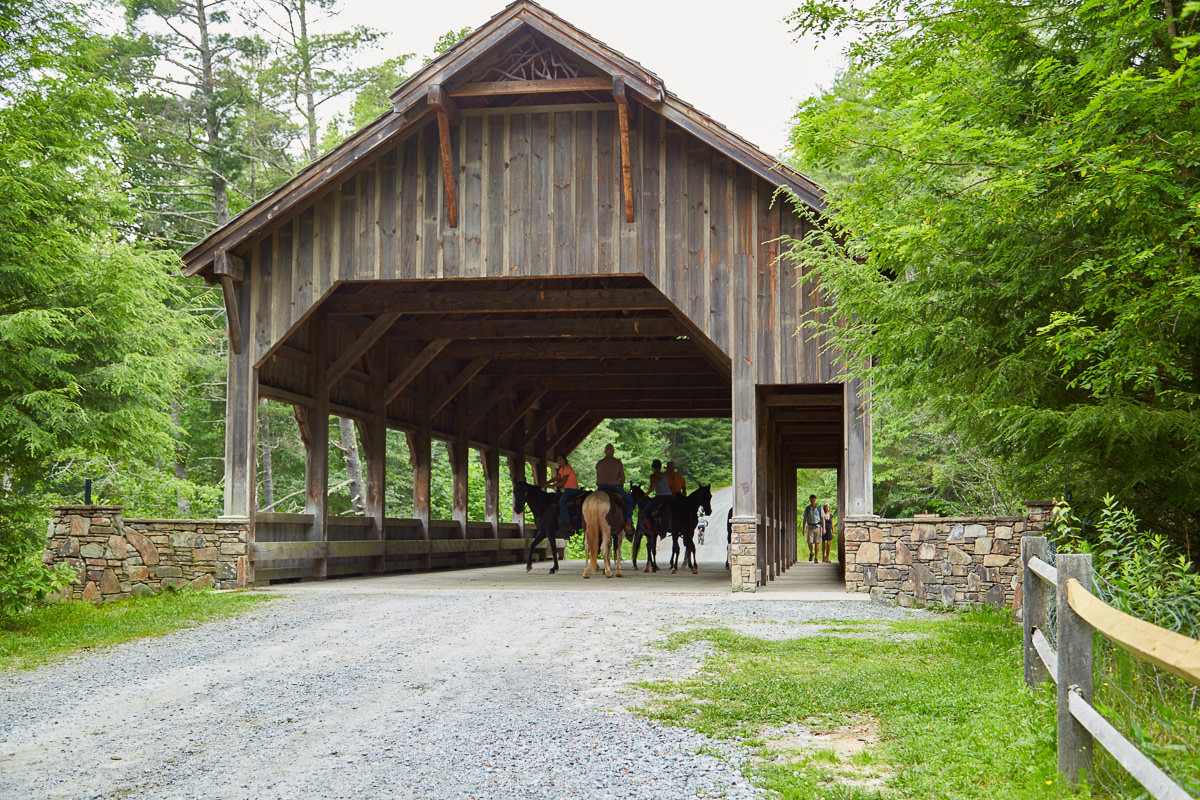 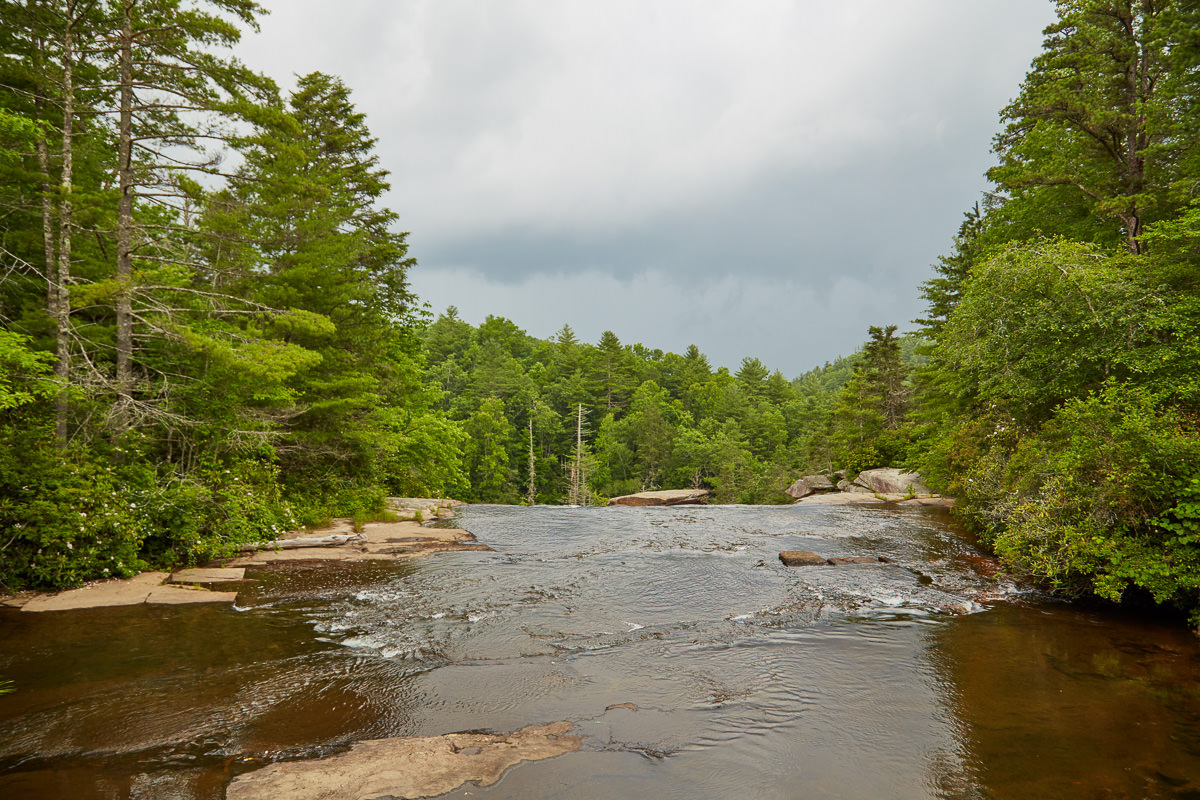 I then hustled back to the car, but only got sprinkled on a bit while cursing my toes as I descended back along all the falls. It had rained enough to make the parking lot a mess, but the sun was back out and that just increased the humidity. I hopped in the car for the hourlong drive back to Taylors, which was mostly in sun.

The severe weather did arrive a few hours later, with a special weather alert forecasting “torrential rain”, but hey, that rain is bringing with it the promise of a daytime high of only 85 degrees tomorrow!

DuPont State Forest is massive and littered with trails and trailheads, so I’ll be heading up there again soon. My GPS seems to have missed part of the hike, because the mileage hiking back and the elevation chart don’t match, but it reports that I hiked 8.61 miles with 1,885 feet of ascent today. I’m feeling some of that right now, lol, but I’m also a bit disappointed that I didn’t reach double digit mileage today. Oh well, there’s always tomorrow.