I was itching to get back into the mountains after the past few weeks, despite the arrival of the humidity to go with the already-present heat. I decided to head out early and stay somewhat close to home at Paris Mountain State Park, hiking two trails that were new to me. 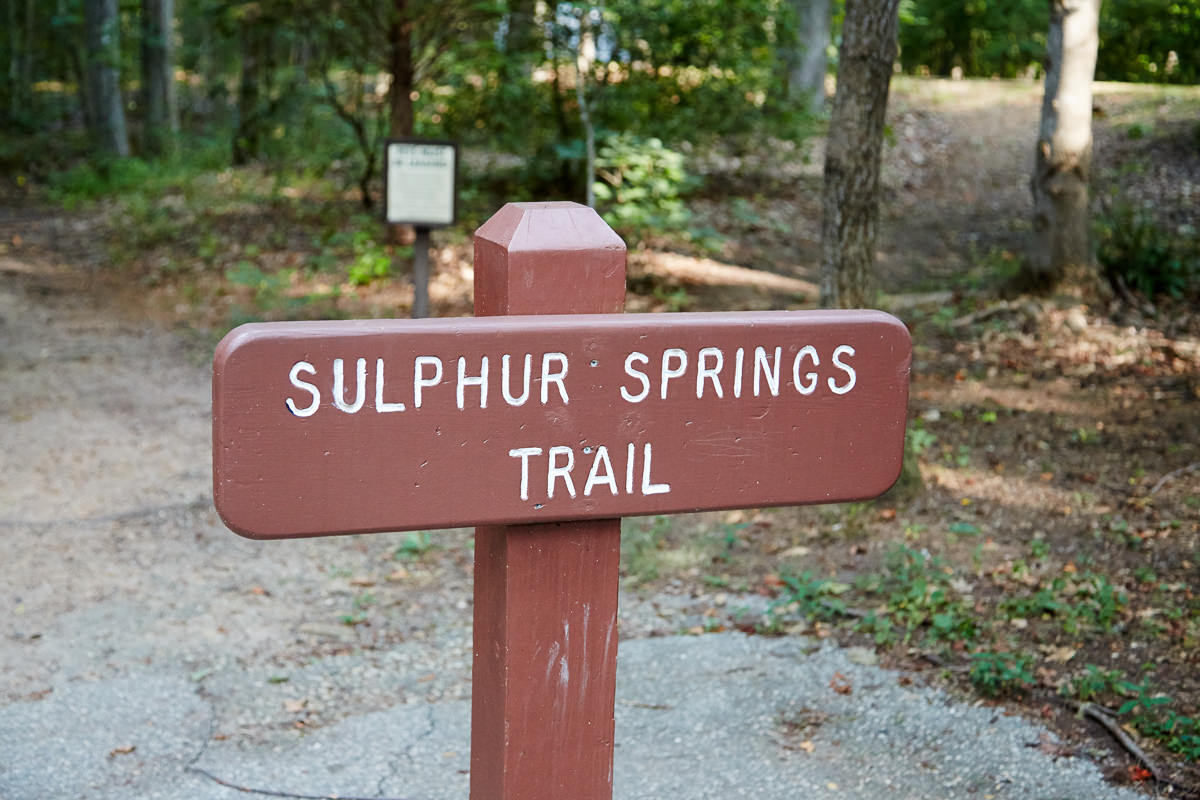 I arrived shortly after the park opened and easily found a parking spot at the 5/6 Picnic Shelter area, which was completely full last time I had been here. I hit the trail and headed up toward the dam on the Sulphur Springs trail. It wasn’t long before I came across something which pleased Aly greatly when I shared it with her: 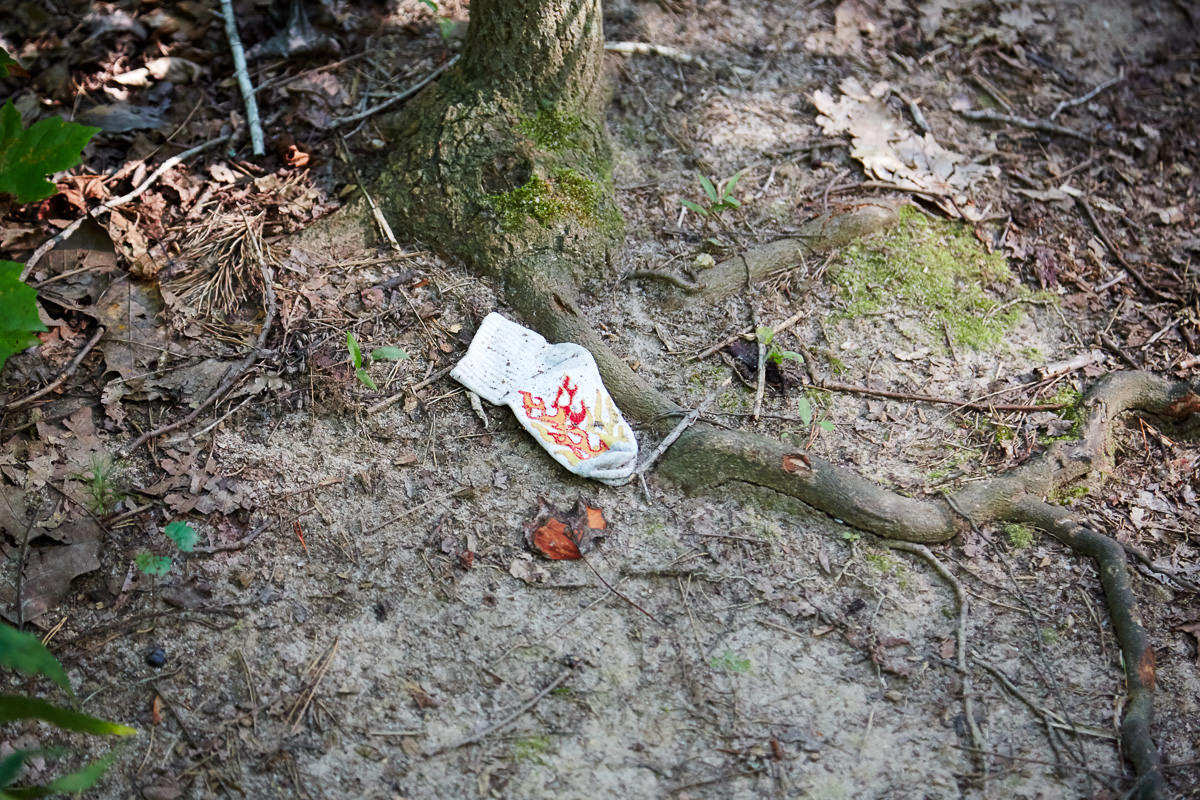 I sent her an email with the picture, and our email conversation ensued thusly:

Me: “Look what I found while hiking today”

Aly: “that apparently has flaming stripes on it”

Anyway, there’s small damn and lake behind it, with a building that looks like a castle turret, which is actually a valve house. The valve I’m sure has long stopped working, but there’s still water flowing through the structure. There was also water flowing off of me at this point, as the temperature had already reached 88 before 10am with very high humidity. 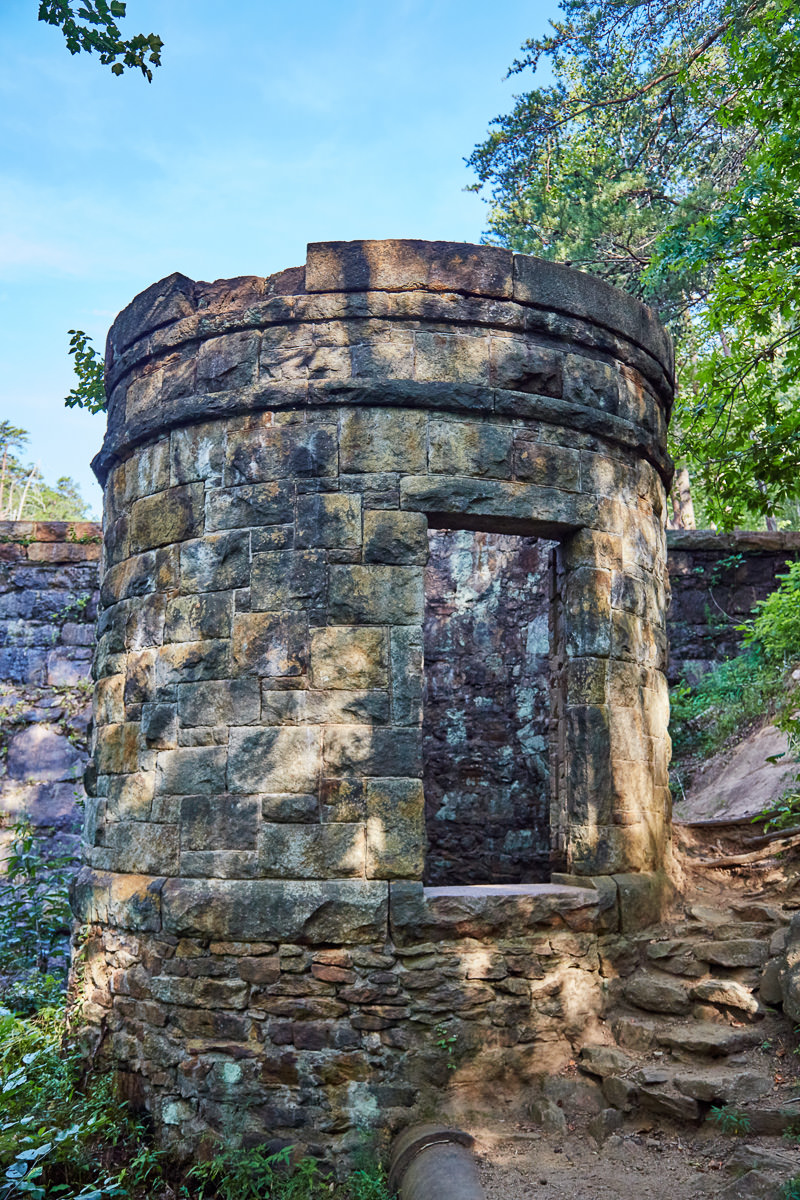 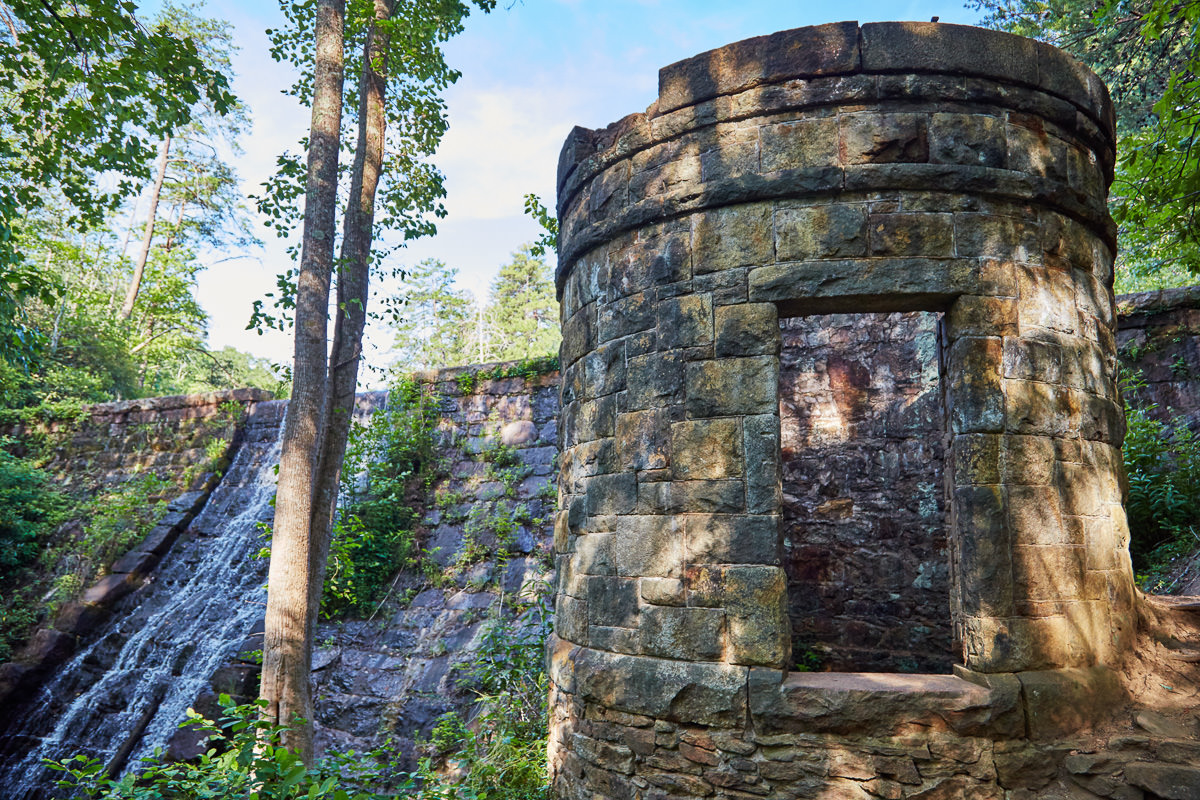 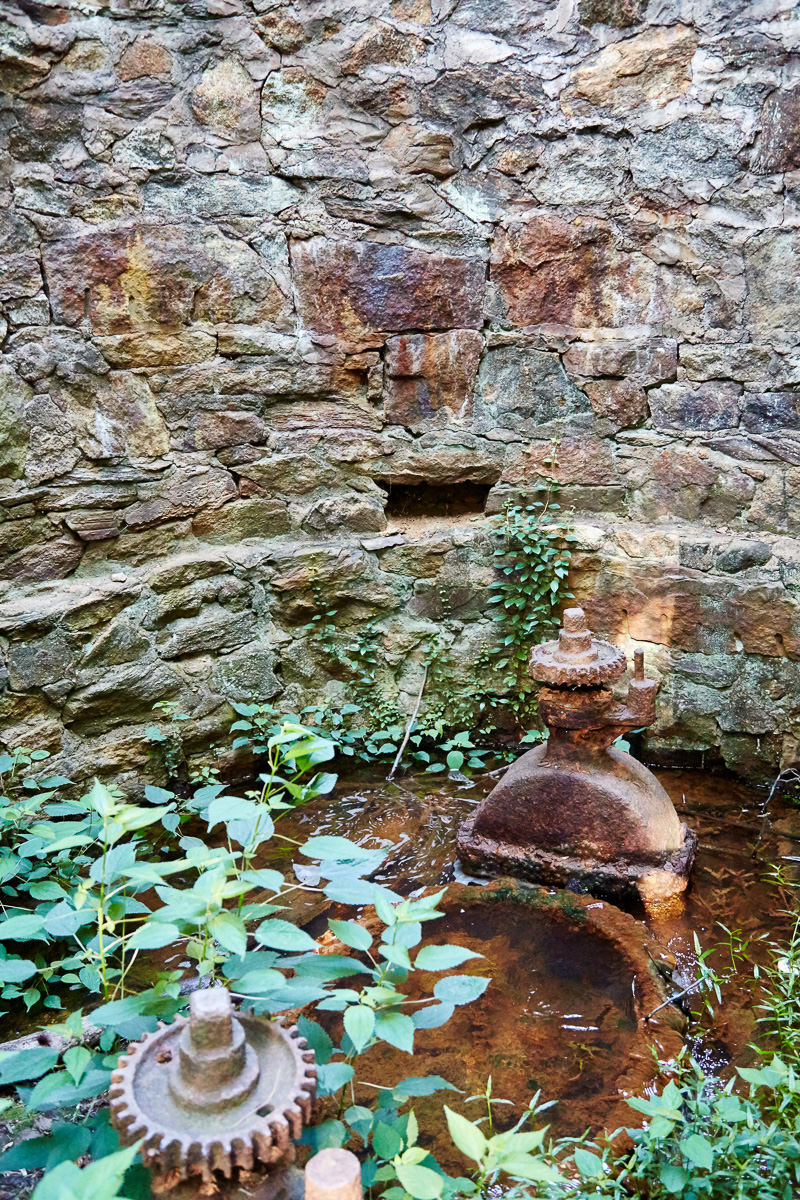 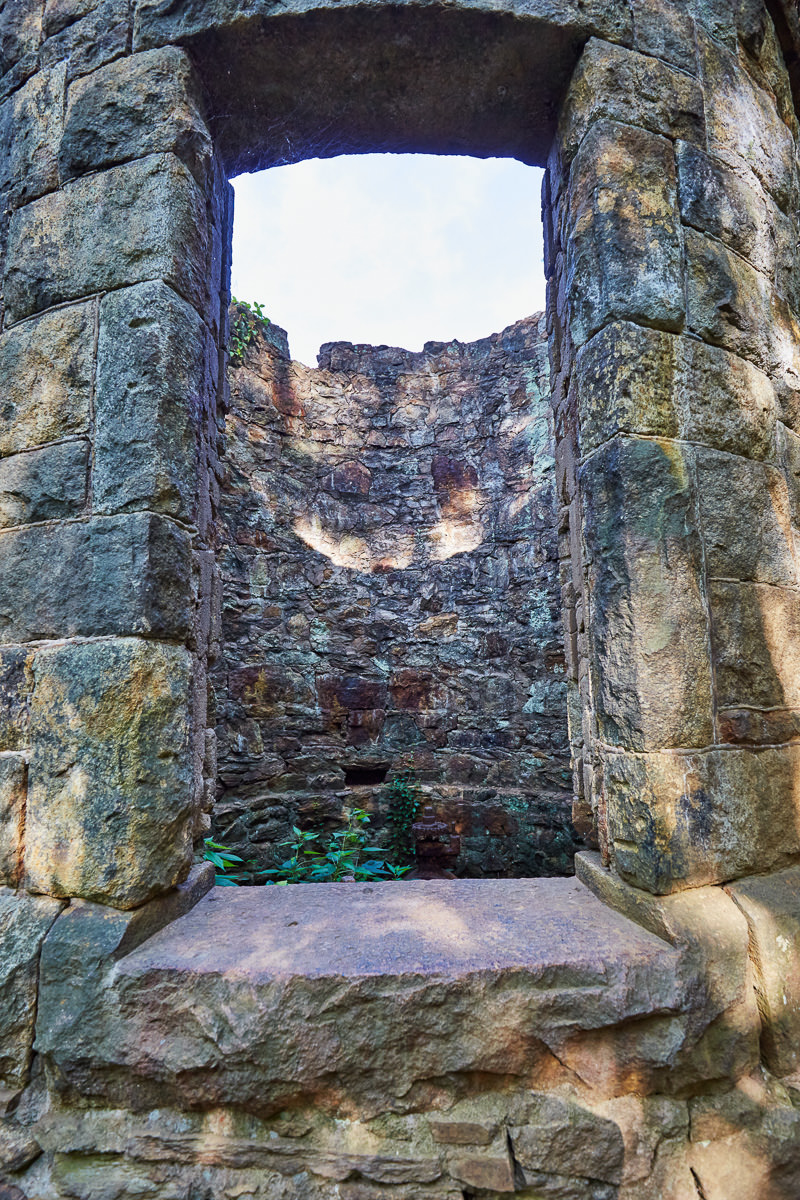 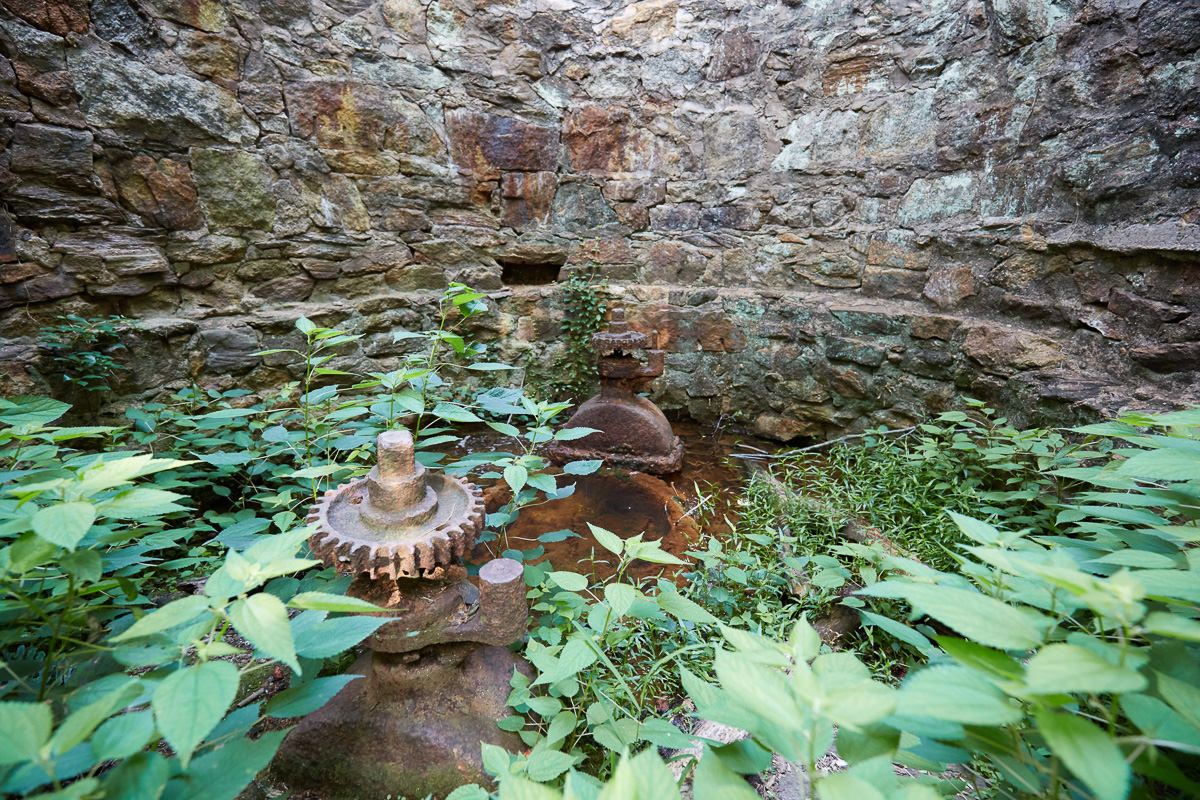 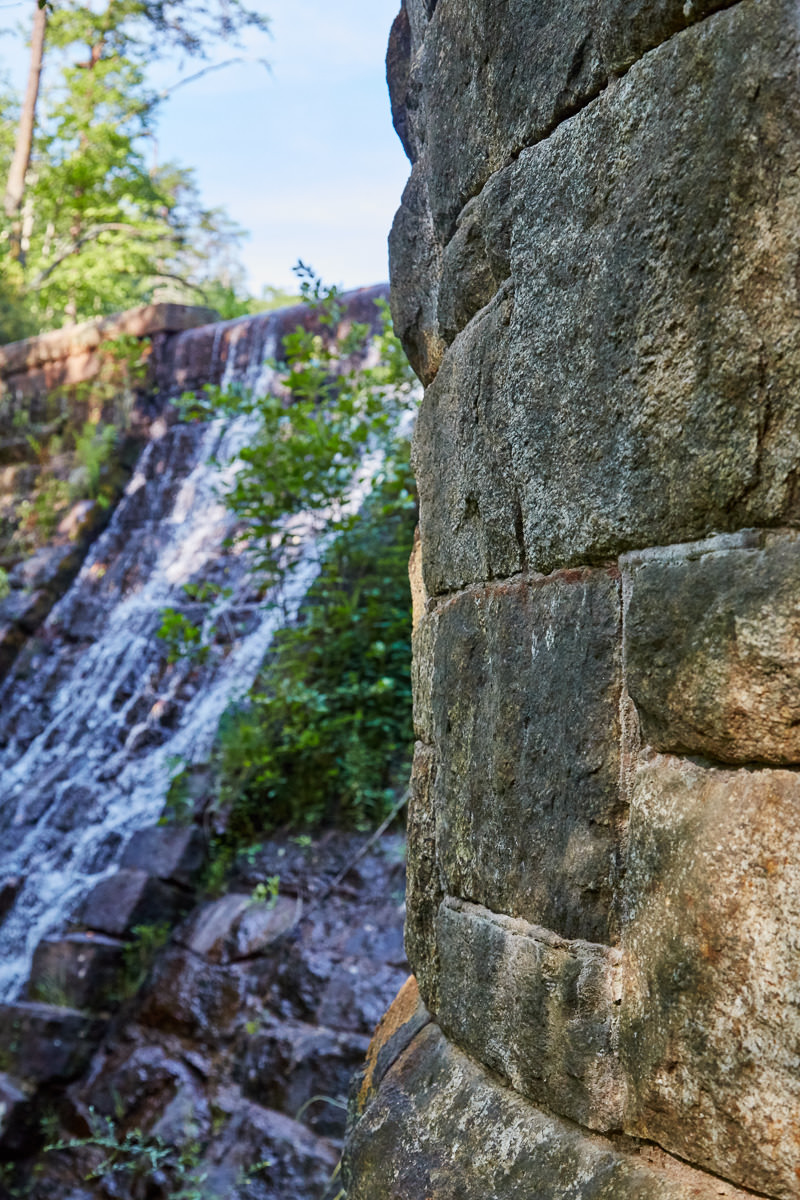 It’s a beautiful spot and I spent quite some time taking pictures here and just enjoying the sound of the water spilling down the stones. I did eventually make my way to the top, though, where I found the top of the damn to be picturesque as well. 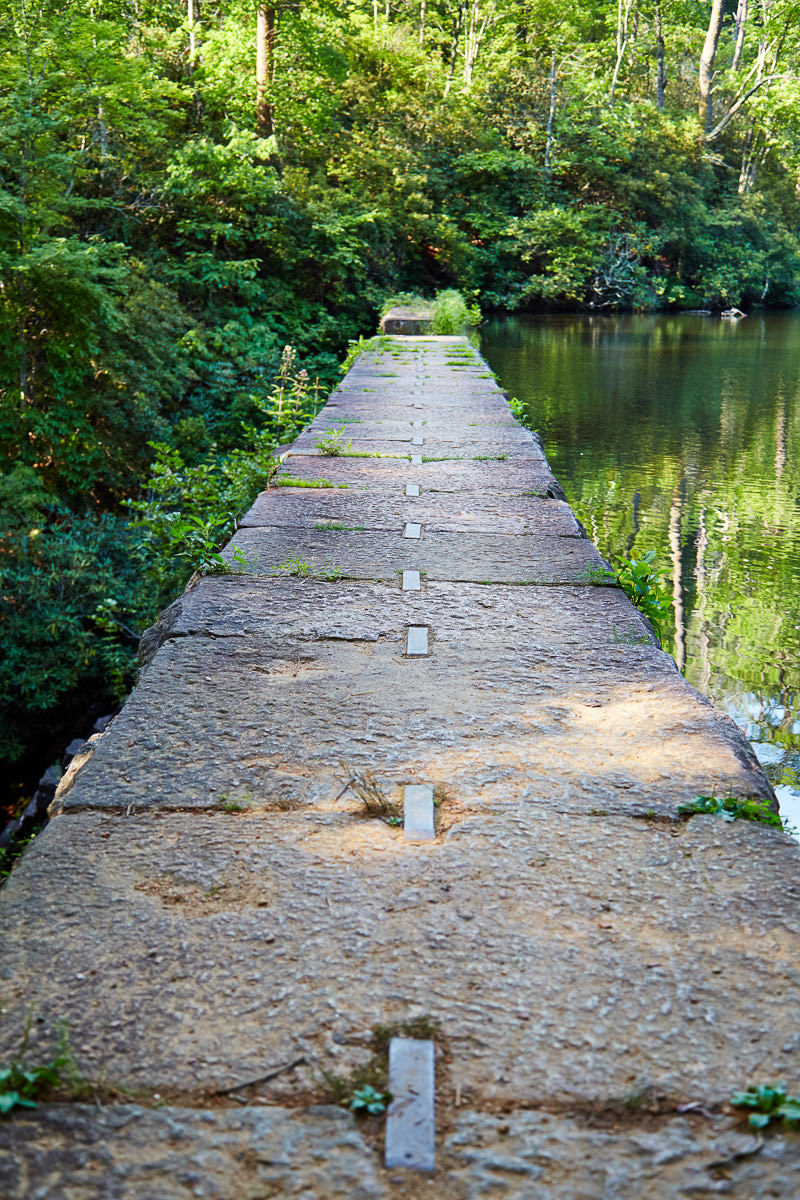 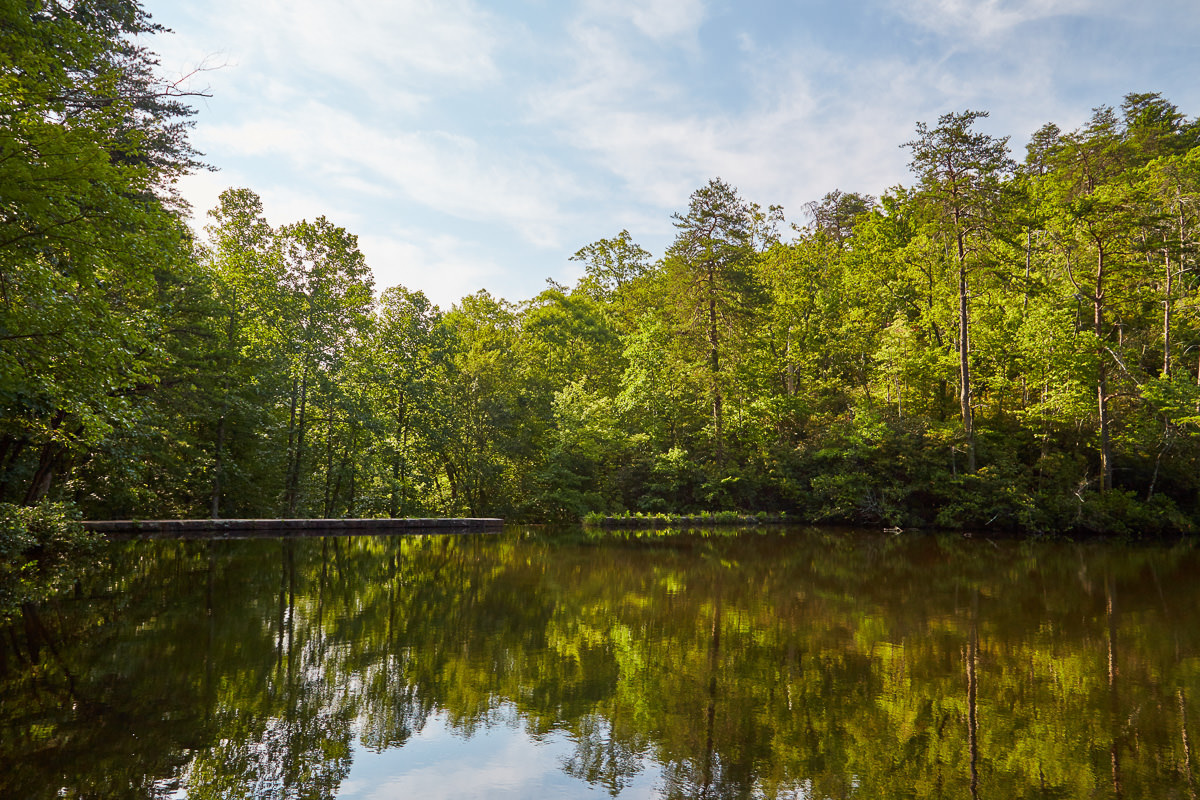 Shortly after moving uphill from here, I came across this little furball: 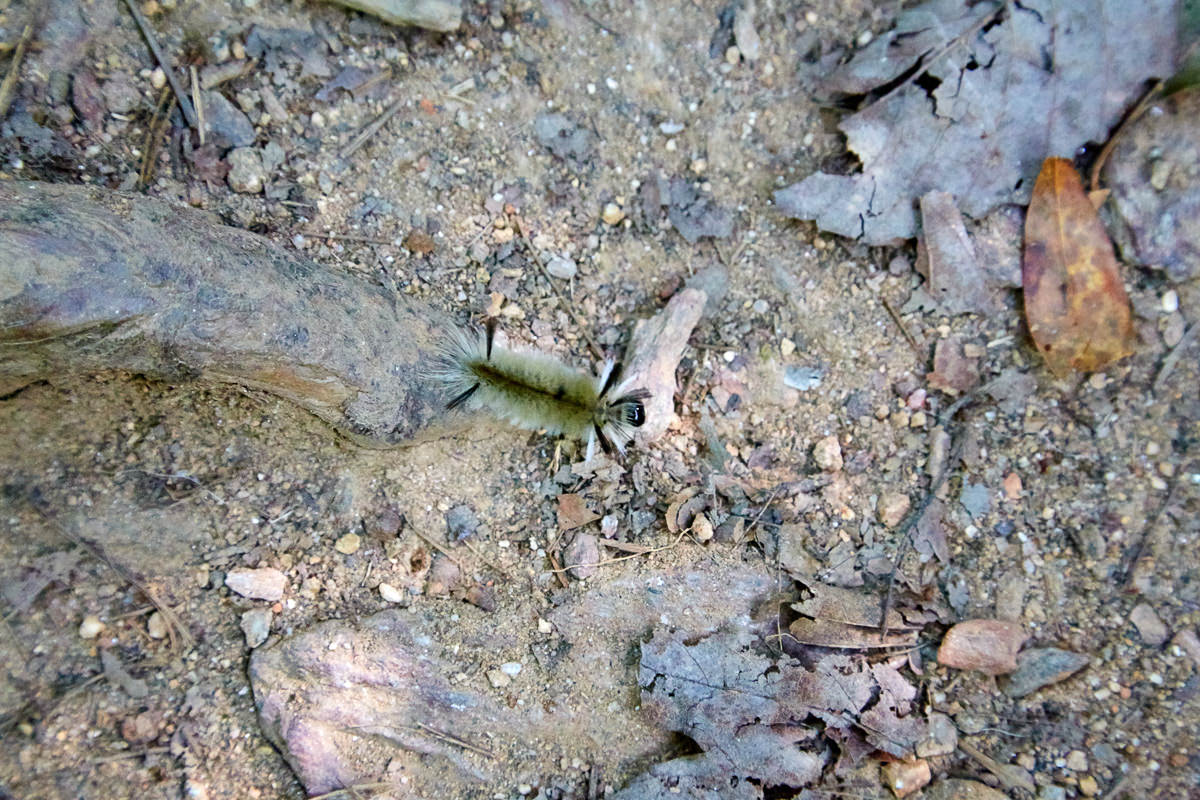 I then went a very long time without taking any pictures, as the trail got very narrow, very steep, and with rough footing. It was challenging to climb up the point where this trail meets Fire Tower Trail, but then it’s a nice stroll down to the Buckhorn gate, which is where I started my hike a few weeks back. As I cooled down along this hike, I decided I could probably also handle the Brissy Ridge Trail, which is a 2.4-mile loop before the heat got to be too much. 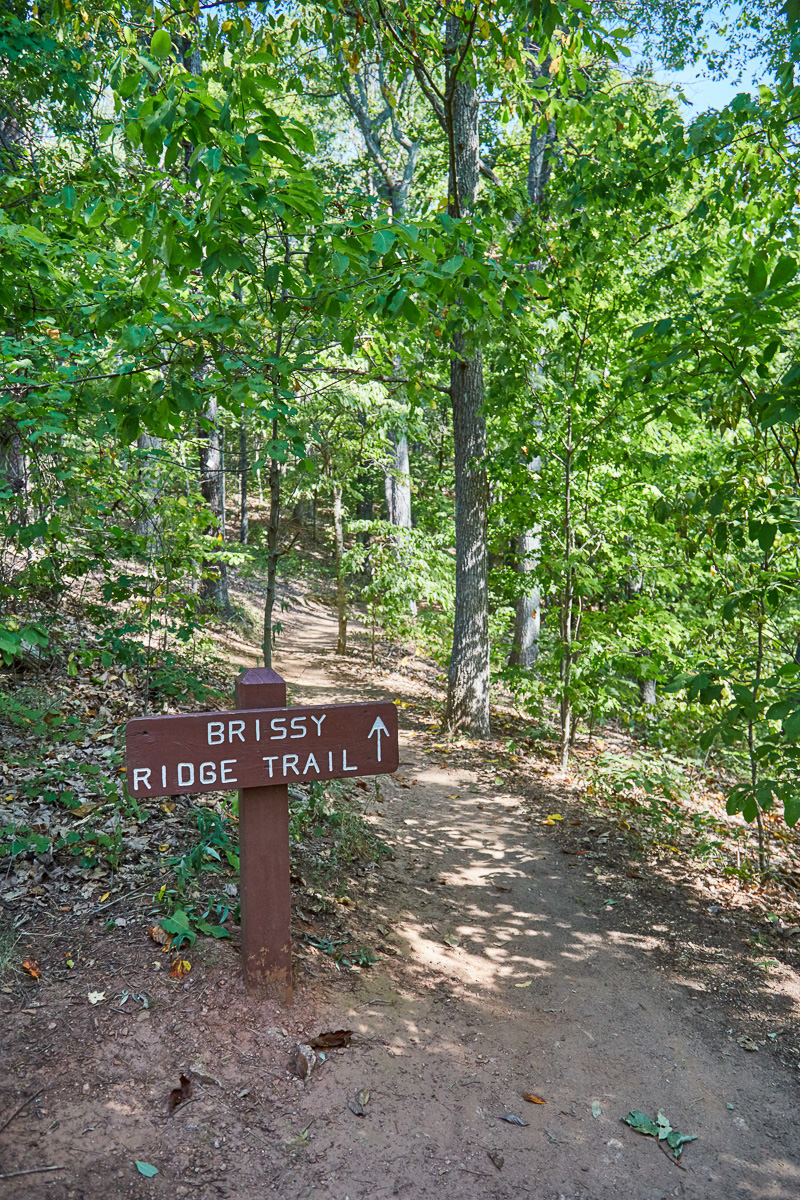 I probably should have skipped it, as the heat and climbing required me to stop a few times just to cool down from the ear-pounding overheat zone. Since this is a loop, the elevation change is the way no matter which direction you choose, but I chose the gradual downhill and steep uphill direction apparently. 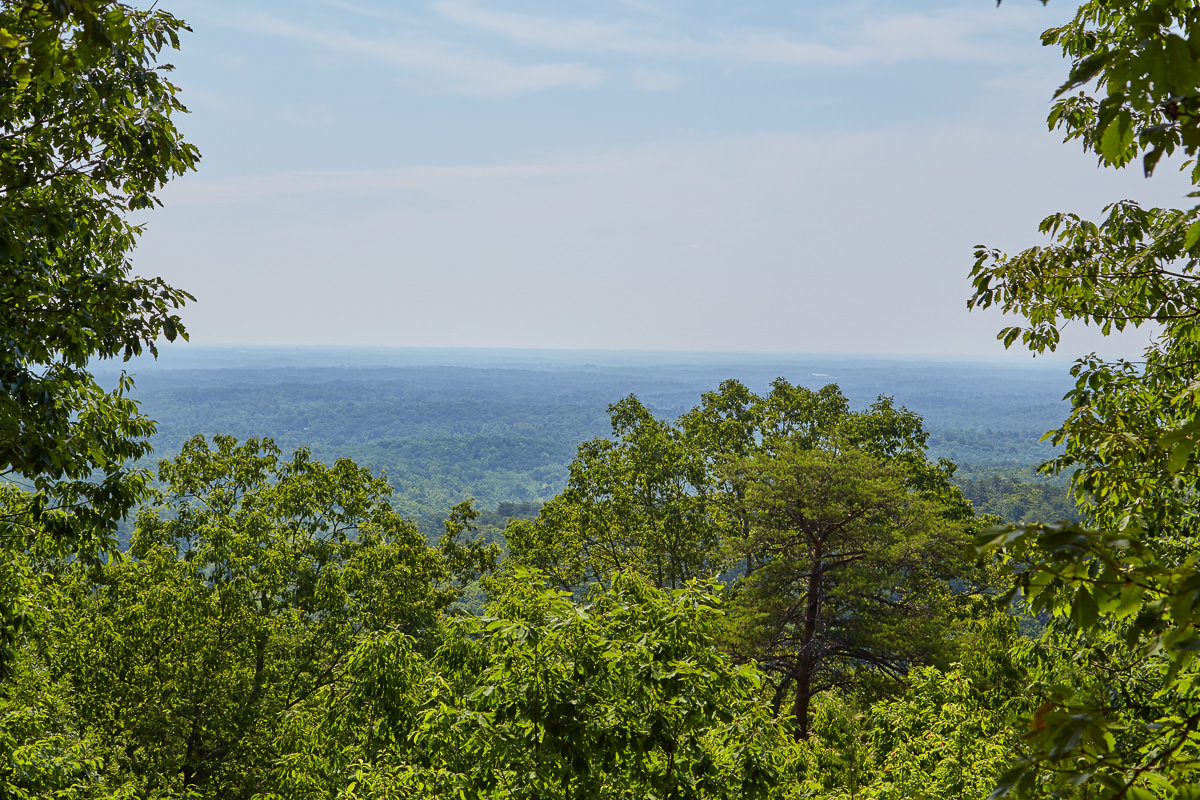 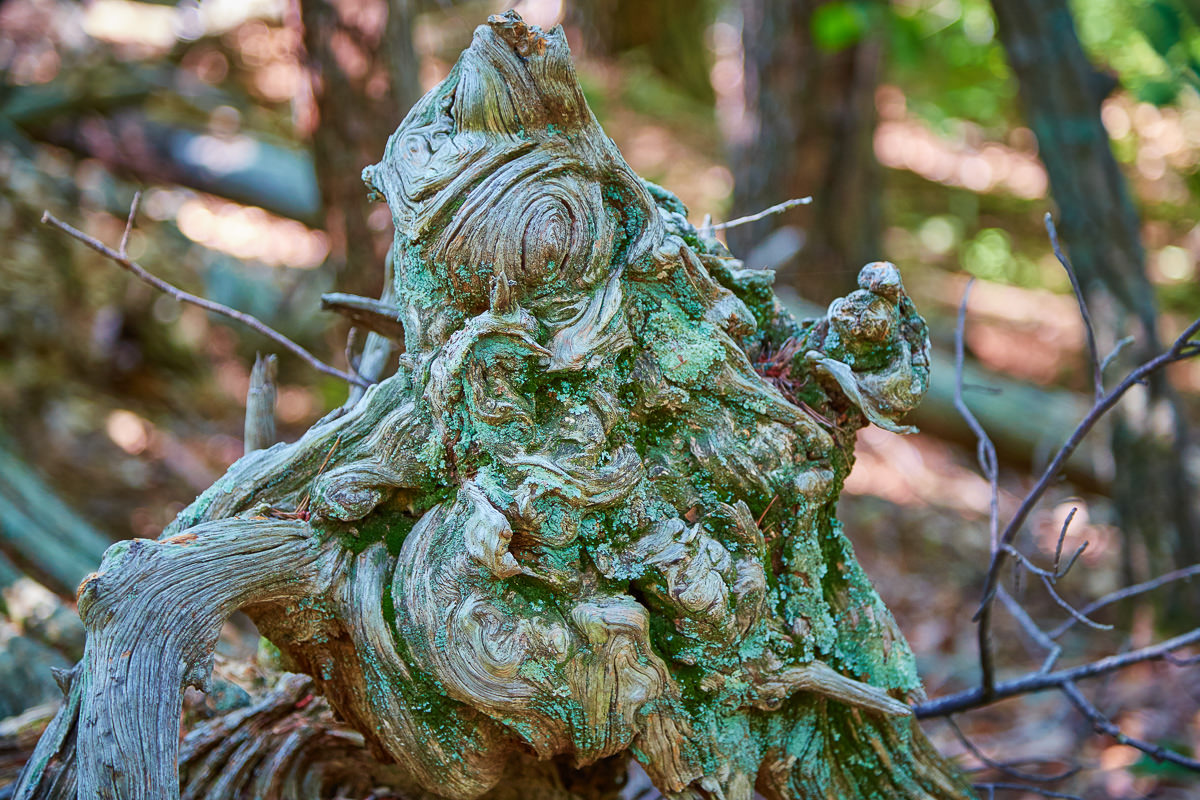 That sensational tree stump was near the end of the loop, so at least I had that to go on. A mile downhill through the remainder of the Sulphur Springs loop got me back to the parking area and wishing I had brought an extra shirt to put on.

In total, I hiked over 6.5 miles with about 1,000 feet of ascent on a blazing hot day. I stopped on the way home for some fajitas at my new favorite joint and decided that I needed to change my plans for Sunday’s hike – finally planning to spend some time wandering downtown Greenville with my camera.