After resting up on Saturday, recovering from the short nights at Lake Keowee, I headed out Sunday morning to celebrate Father’s Day at Jones Gap State Park. It was a lovely morning for the drive, which took about an hour, with an extra 10-15 minutes for a detour around a closed section of River Falls road.  I found a parking spot and made my way to the trailhead. 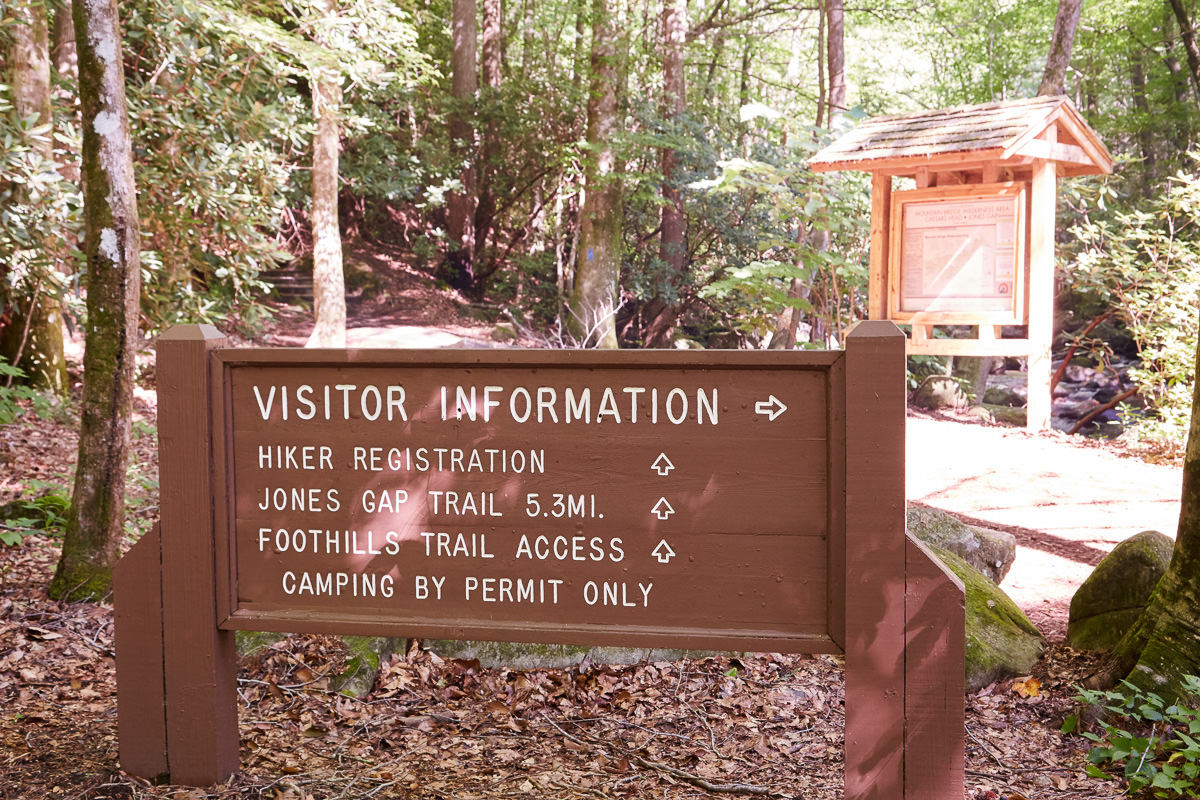 The first mile or so is hiked on Jones Gap Trail, which connects Jones Gap State Park with Caesar’s Head State Park to the west. This gently rising section travels right alongside the cascading Middle Saluda River, with plenty of spots to take in the water bounding over the rocky stream, which is always in earshot. 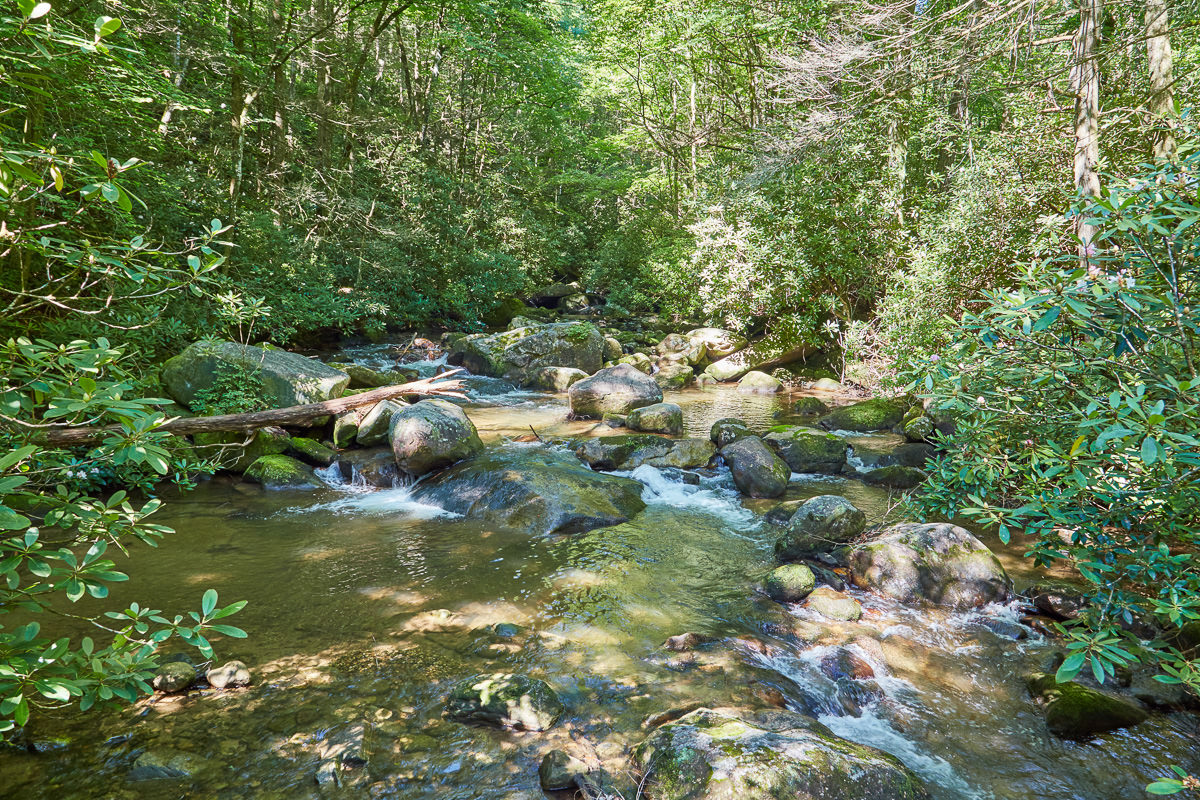 Stay right when the trail splits to veer off onto Rainbow Falls Trail, crossing a bridge to the other side of the river. This is where the real hike begins. From this point, the trail heads mostly north, and mostly straight uphill, at least to this casual hiker. In the 1.8-mile hike up to the falls, you’ll ascend more than 1,000 feet of elevation, which is essentially like going up stairs for mile and a half. In fact, much of the hike from here actually is stairs of one variety of another. 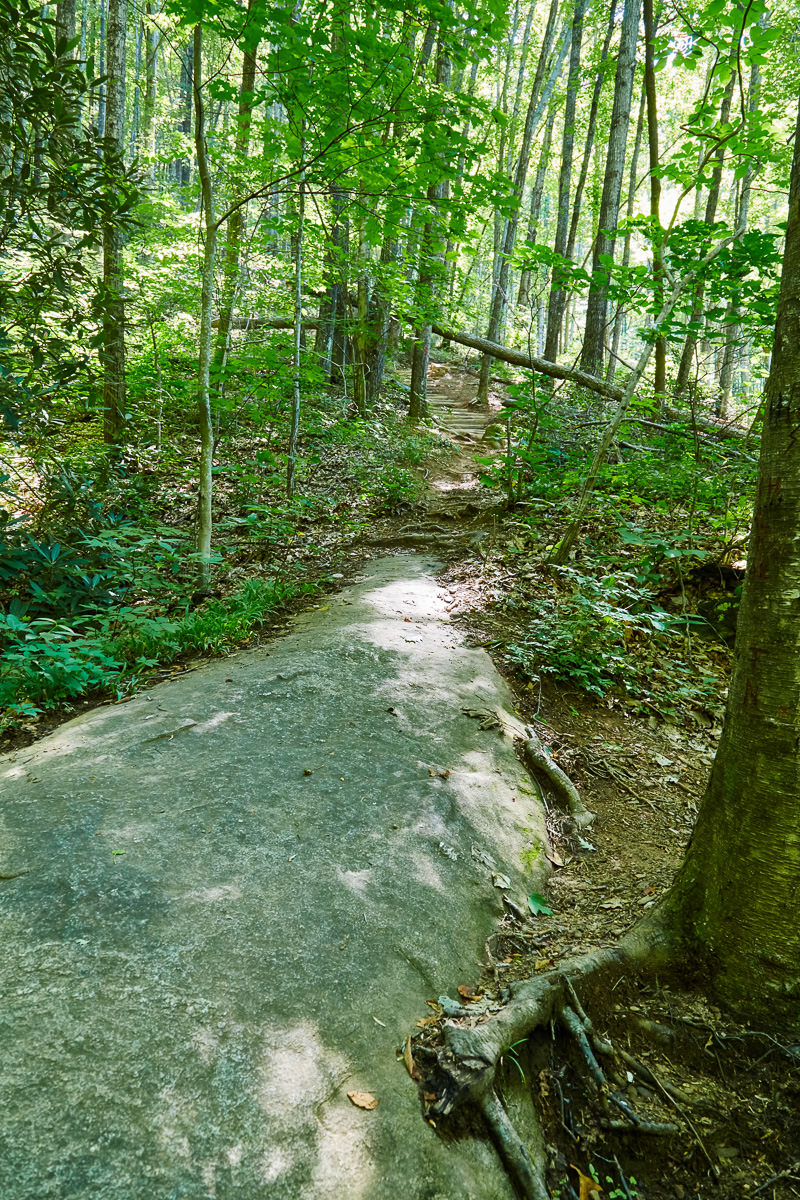 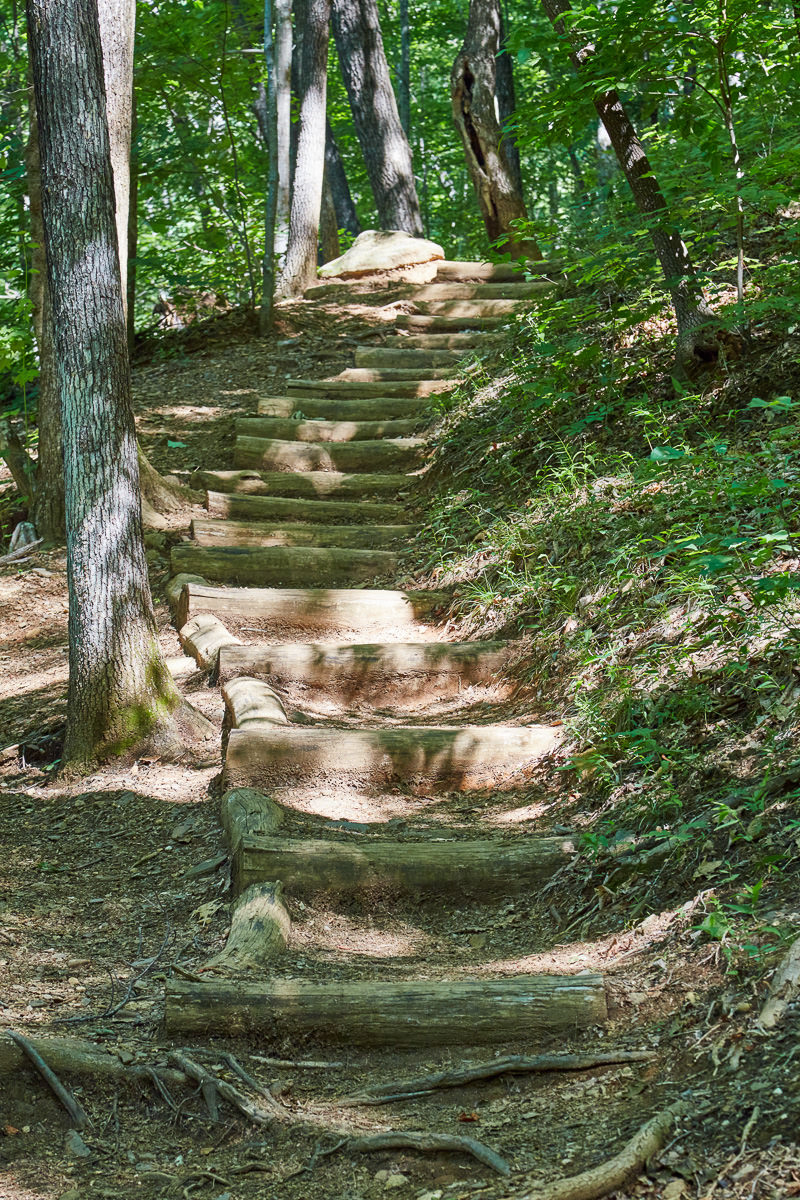 I should note at this point that there are also a few crossings on small bridges (or just rocks) and that the hike takes you close to the creek several times along the way up the mountain. I took a rest partway up and shot a few pictures of the water streaming over rocks (note the second picture – you’ll be seeing this same shot later in a different state). 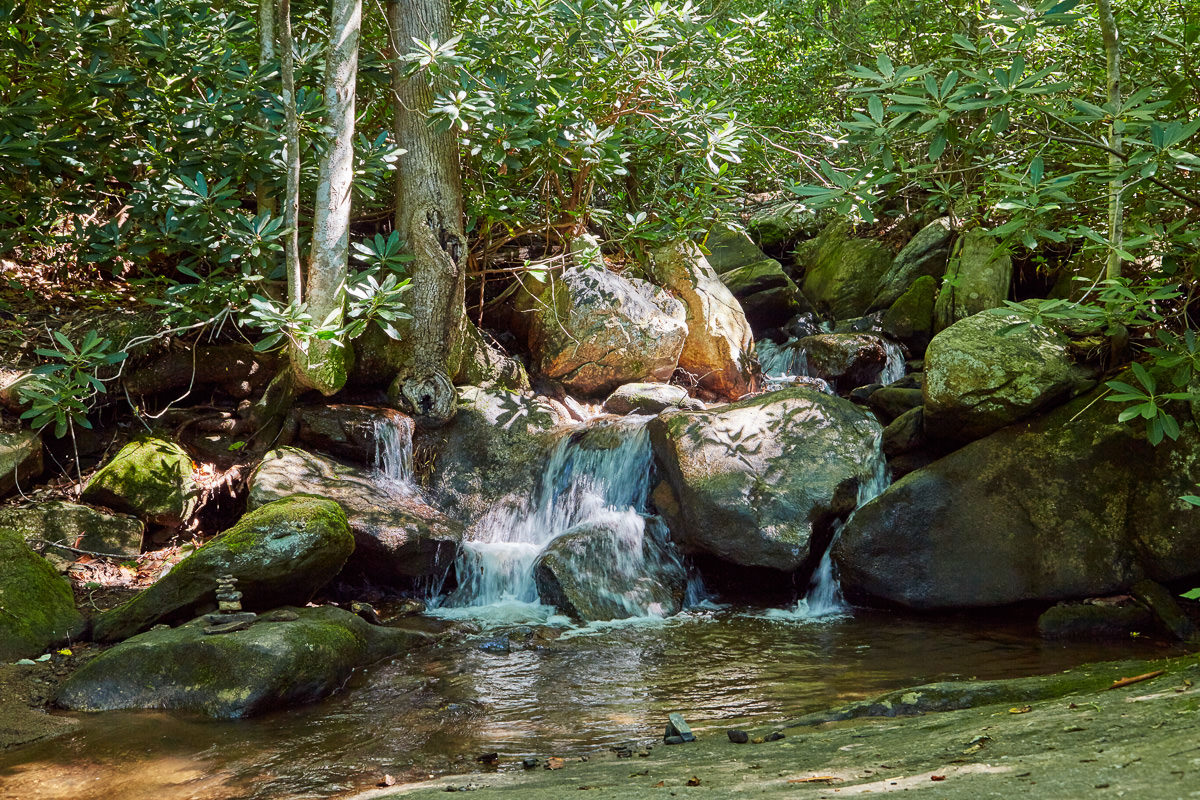 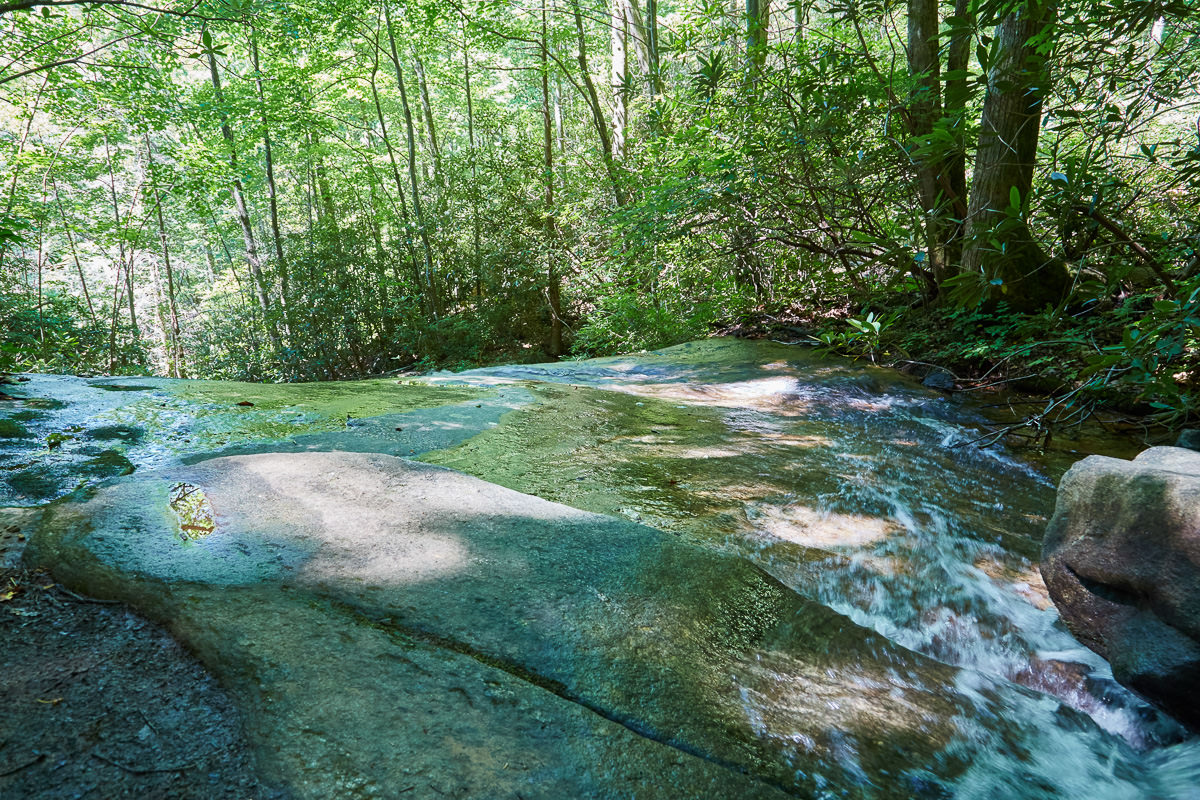 There are a few openings through the trees where you get a pretty nice view of the other side of the gap (I called them excuses to rest). 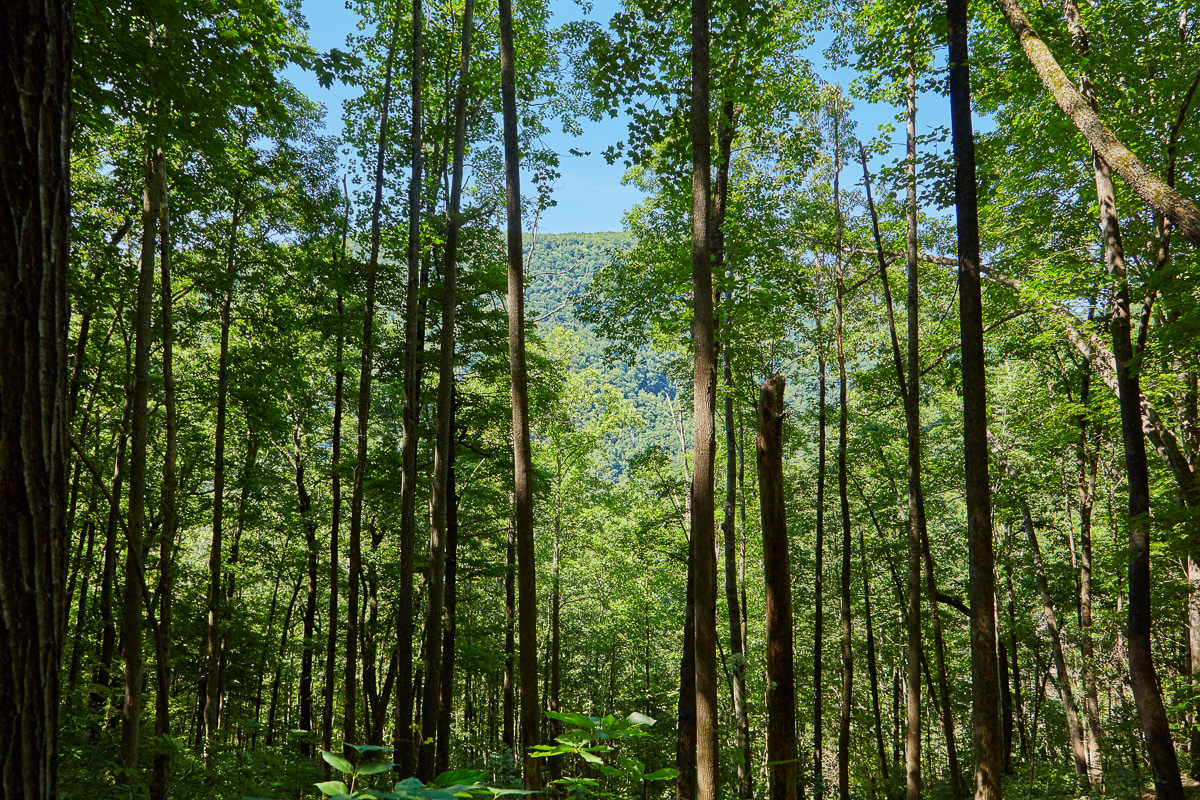 The trail narrows at several points on the upper half, and the boulders grow large. It may be hard to tell, but this photo is taken at a very steep upwards angle, probably just a few degrees from straight up. 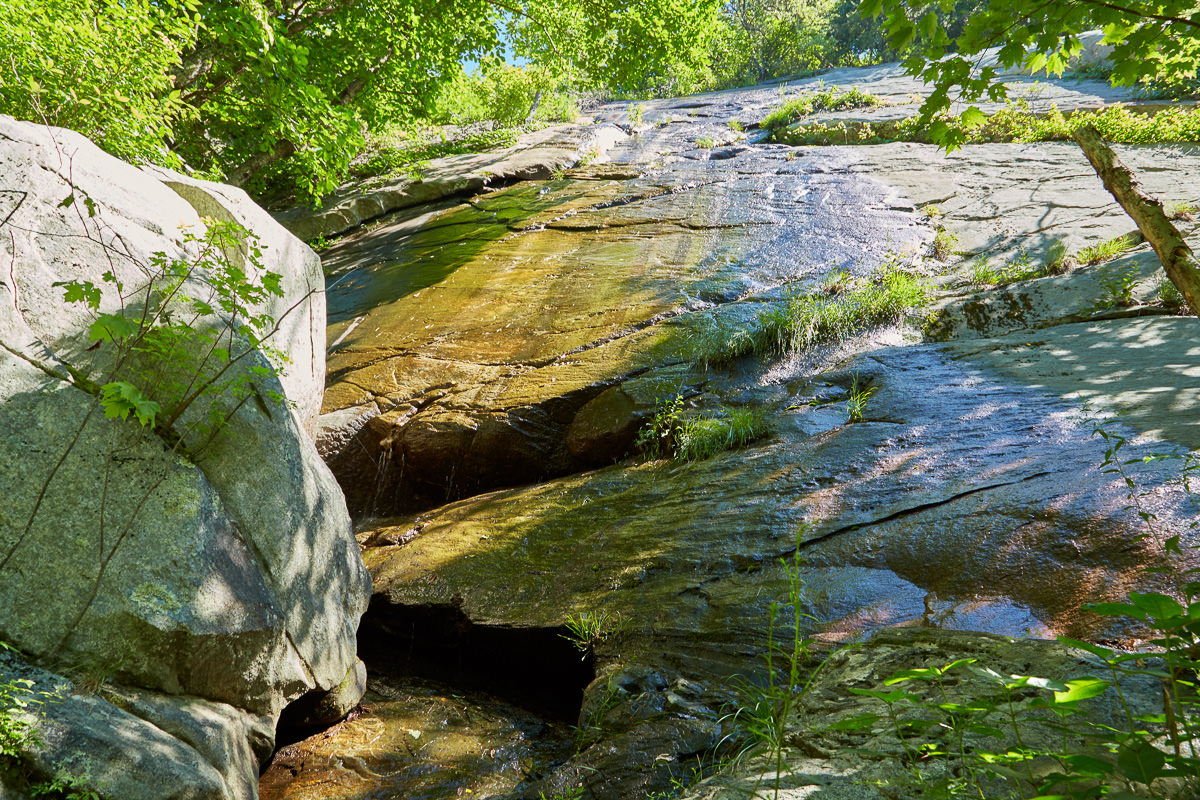 At this point, the climbing feels endless, and when combined with the blistering heat and the humidity trapped by the forest, can be a bit discouraging. I passed a few people coming down from the falls who assured me that I was fairly close, and that the trip would be worth it. I had to provide that same assurance to many people who were ascending while I made my descent, and even heard a few parents decide not to relay the remaining distance to their weary kids. A few minutes later, I was rewarded. 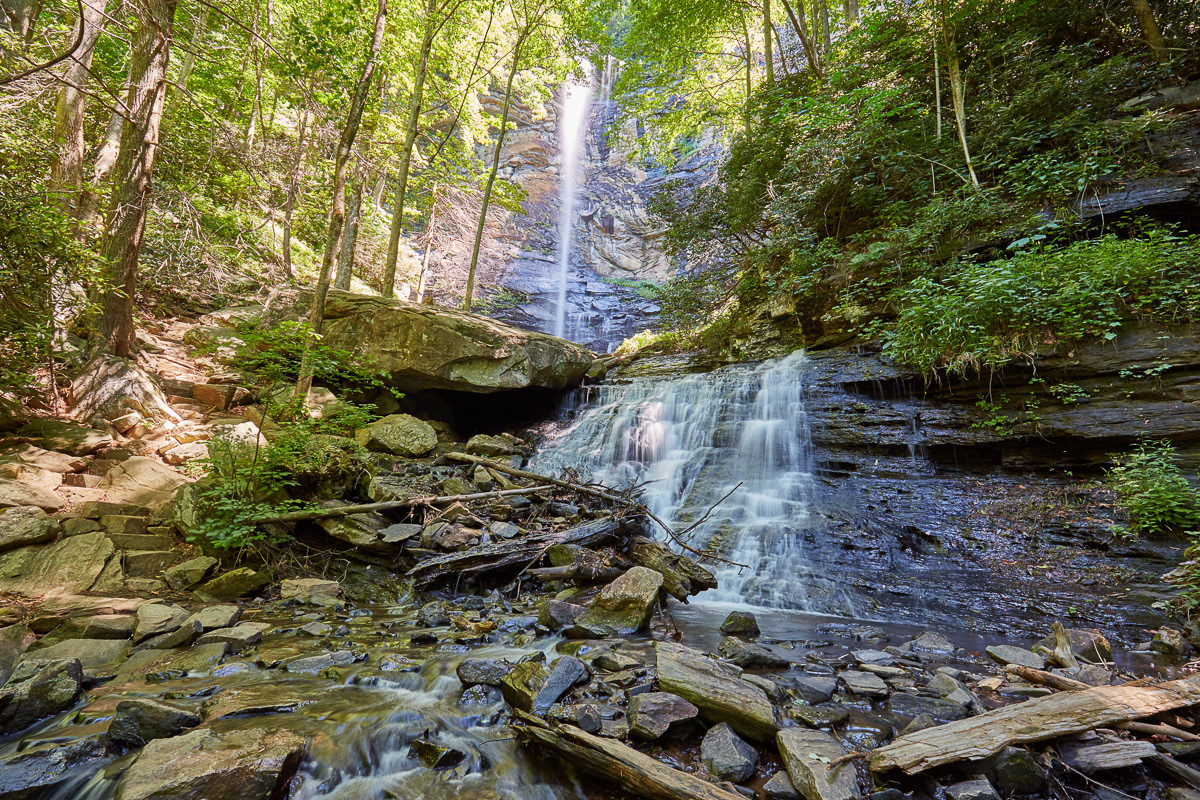 I set up my tripod in the river and captured the main falls in the distance with the shorter cascade in the foreground. As you can see, there were plenty of rocks in the water to stand on and navigate from right (where the trail came from) to left (where the trail goes up towards the main falls) across the river. At least, there were plenty of rocks above the water to navigate at that point – that would soon change (hint: note the width of the main upper falls). I shot a few long exposures from this vantage point, then moved up to the rocks in the lower right corner of the picture to bring the lower cascades into the foreground. 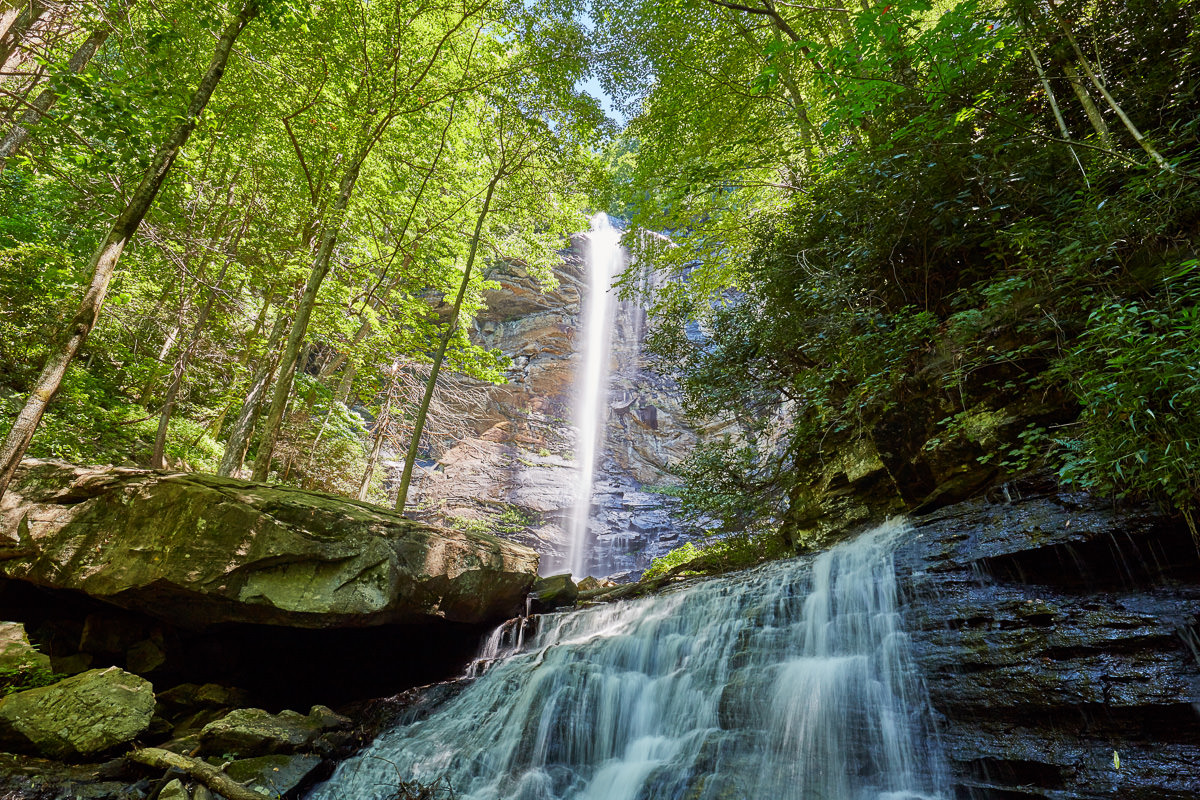 I shot the above picture as a test shot, then put on my Big Stopper neutral density filter and took an exposure that was around 3.5 minutes long, during which the wind whipped up overhead and the upper falls nearly quadrupled in width (note the increased volume of the foreground cascade as well): 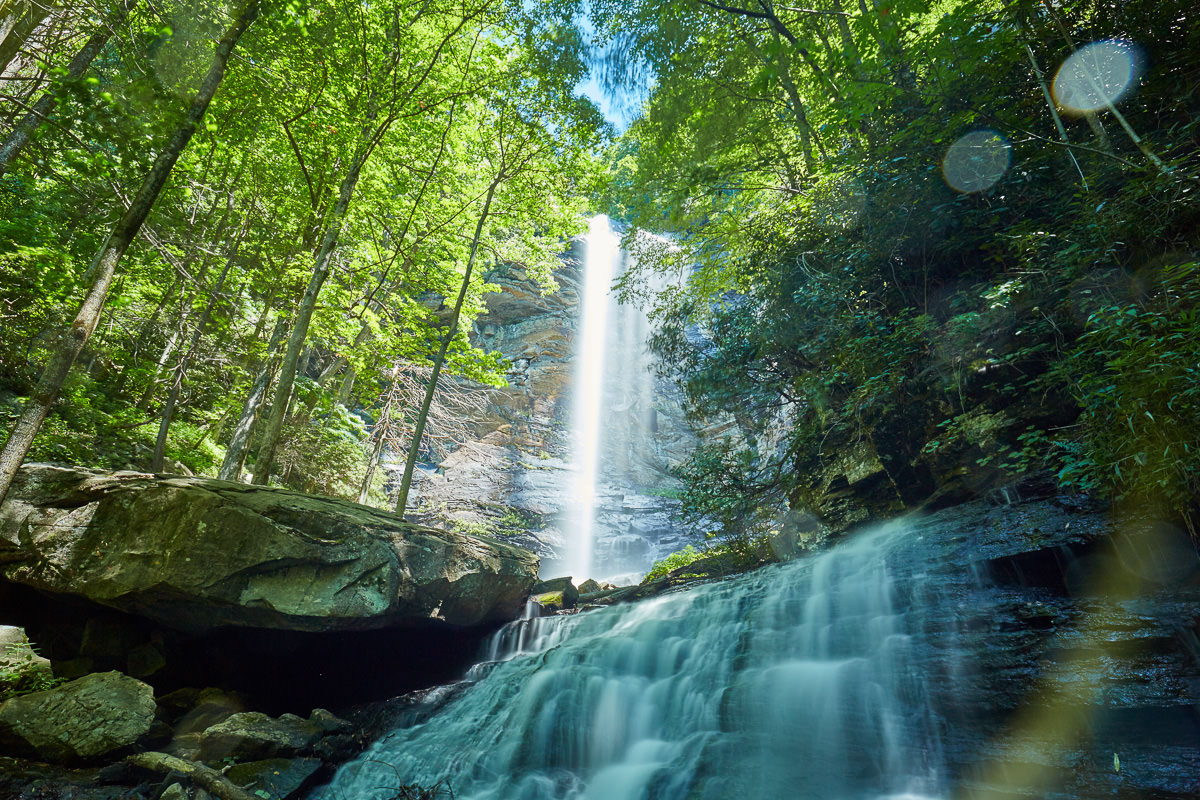 At this point, I realized I was no longer standing on rocks above the water, but actually standing in the water, on those same rocks. Since the water was rising rapidly, I grabbed my gear and headed across the river to the large rock on the left side of the frame. 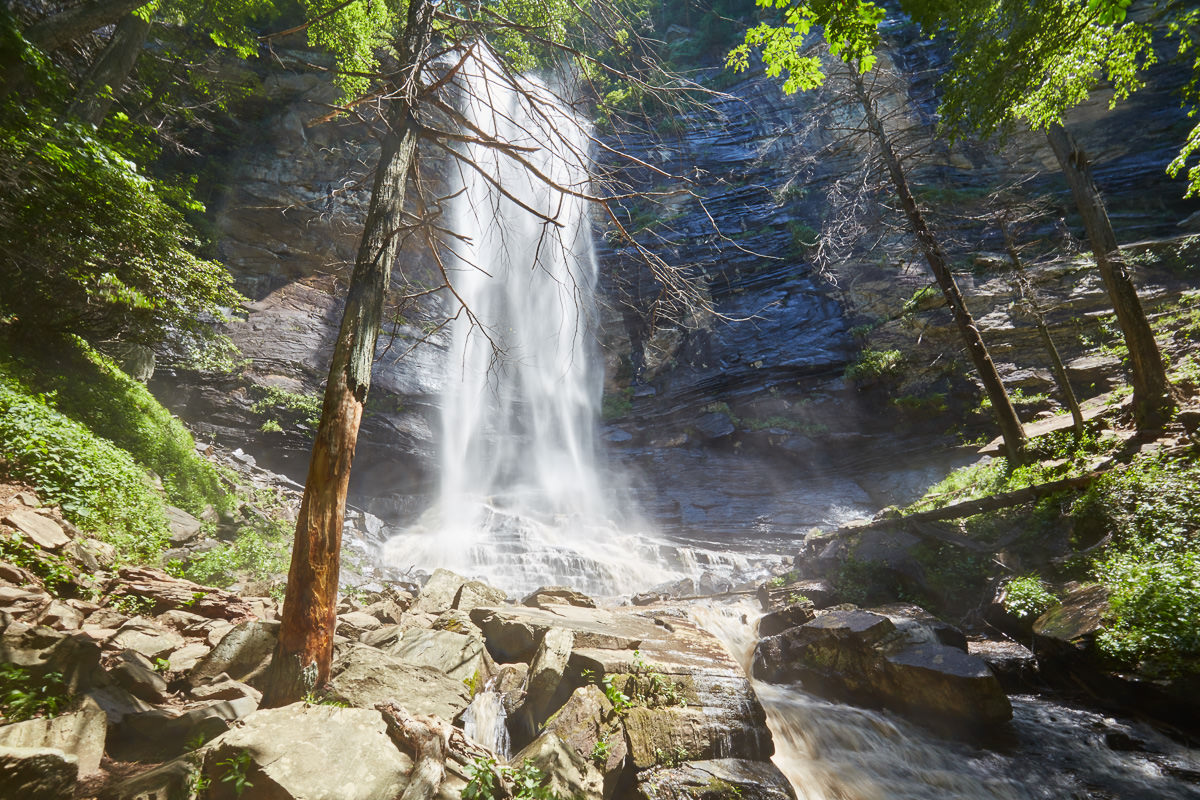 The waterfall had increased to a loud roar, and the massive crash of water generated an increasingly heavy spray that was soaking me and my camera gear. But it was astounding, a truly amazing experience that this happened while I was actually there to witness it. 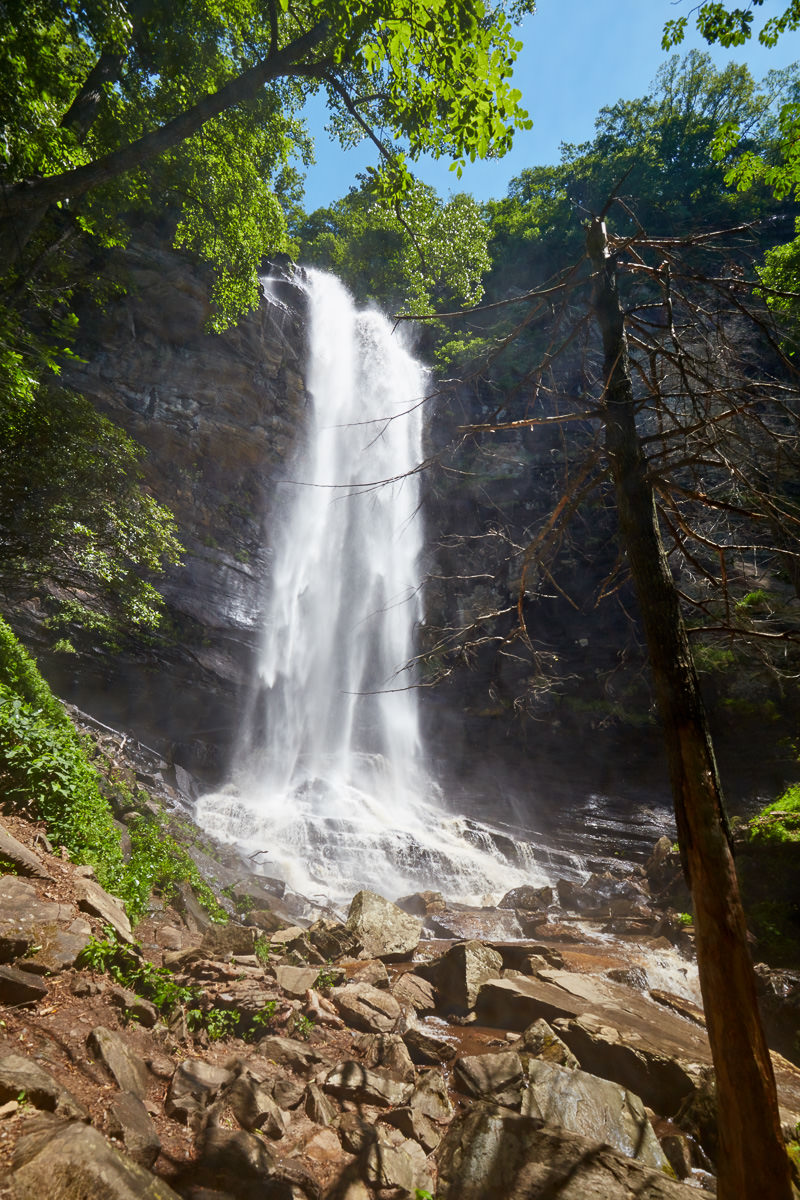 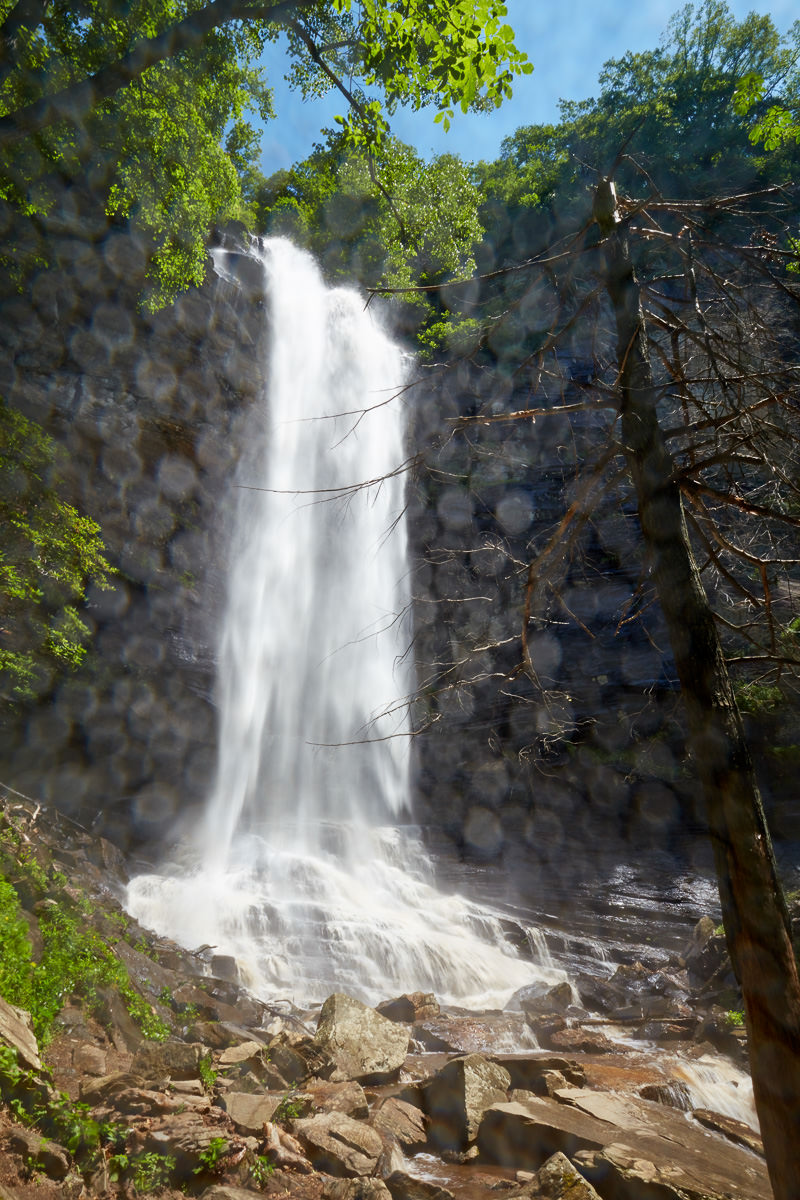 The water spots on the lens actually made an interesting image. It was so wet that I had to throw my camera into the backpack before heading down. On my return crossing of the stream at the lower cascade, I was ankle deep in the rushing waters, which made for some squishy socks the entire hike down. The hike down occasionally wore on my patellas, but it was much easier than the way up, despite the increased heat and the fact that I was soaked head to toe. 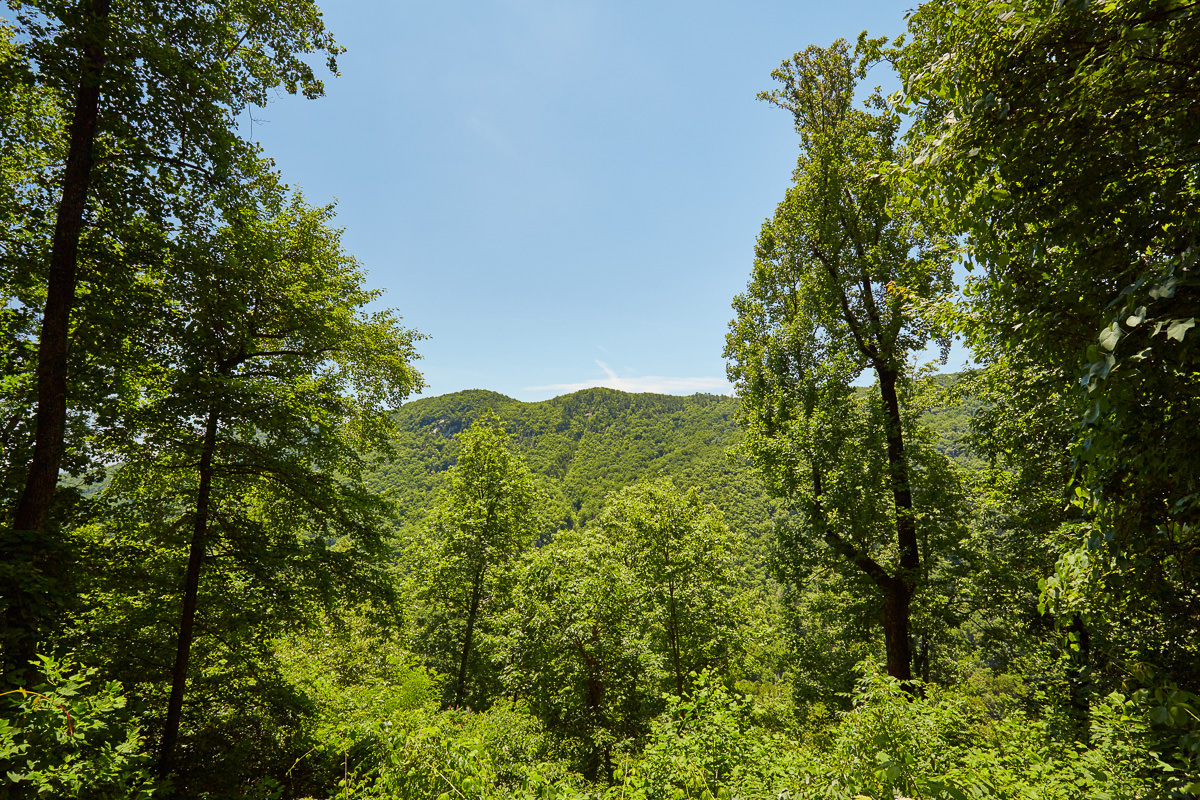 Remember that flat and dryish rock that I asked you to note earlier? I stopped to check it out on the way down, and it was completely underwater, with so much water flowing over it that it was crashing up in the air as it hit a ledge. 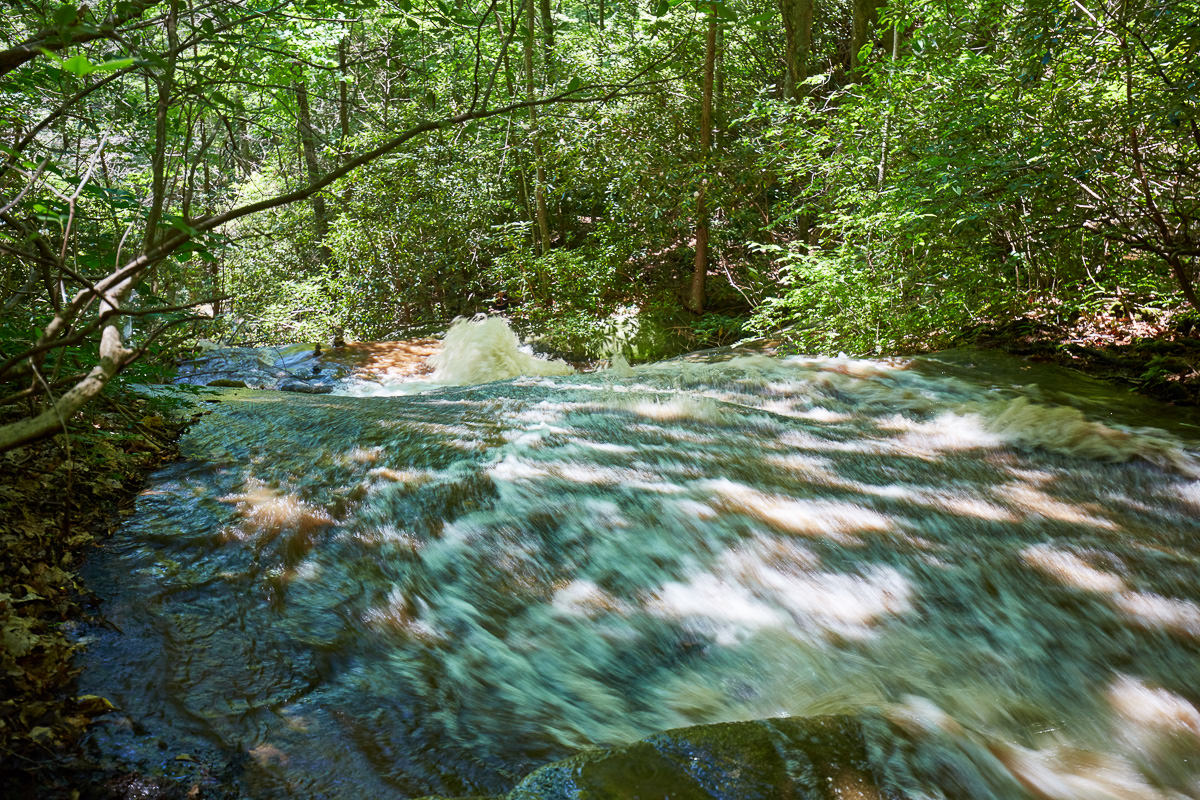 Rainbow Falls Trail at Jones Gap State Park is rated as a strenuous hike, and I understand why now. It’s a nice hike with a serious climb, but the stunning waterfall is definitely worth the effort, and I will definitely return. The trail is very pretty in spots and occasionally dotted with big boulders that have become part of the trail. 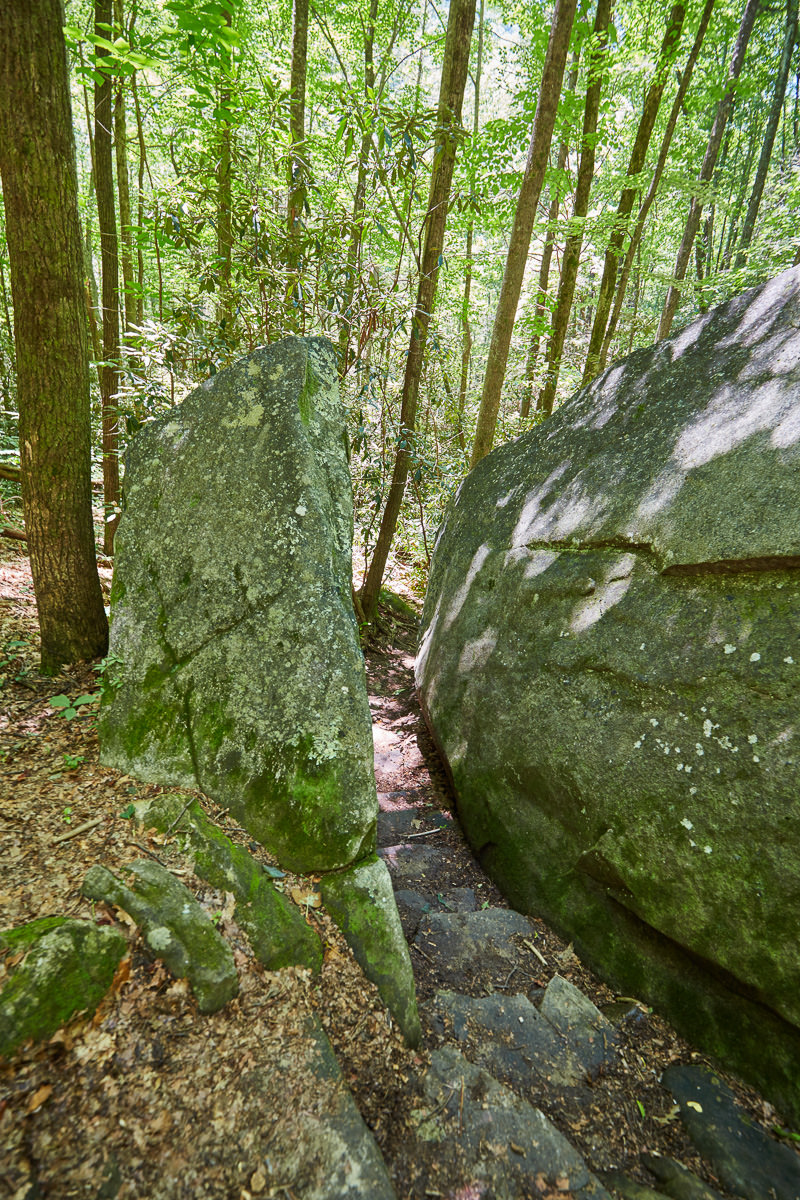 Overall, I spent four hours total, around 2.5 hours hiking and 1.5 taking pictures and resting. The total distance from the parking area was 6.6 miles and had 1,900 total feet of ascent.