With the promise of cooler weather, I decided to tackle what would prove to be a hike properly labeled as “strenuous”: Table Rock Trail at Table Rock State Park. After my strenuous hike last Sunday up to Rainbow Falls, I knew I didn’t want to sherpa all my Canon gear again, so I opted to travel light with my Camelbak and the Fuji X100T dangling from my wrist. I got to the trailhead around 10am, registered to hike, and hit the trail.

The opening section is fairly flat and passes several mini-waterfalls and sliding-rock cascades. The first part of this is actually paved, and their were lots of people in the water, though there were many more when I returned later on. 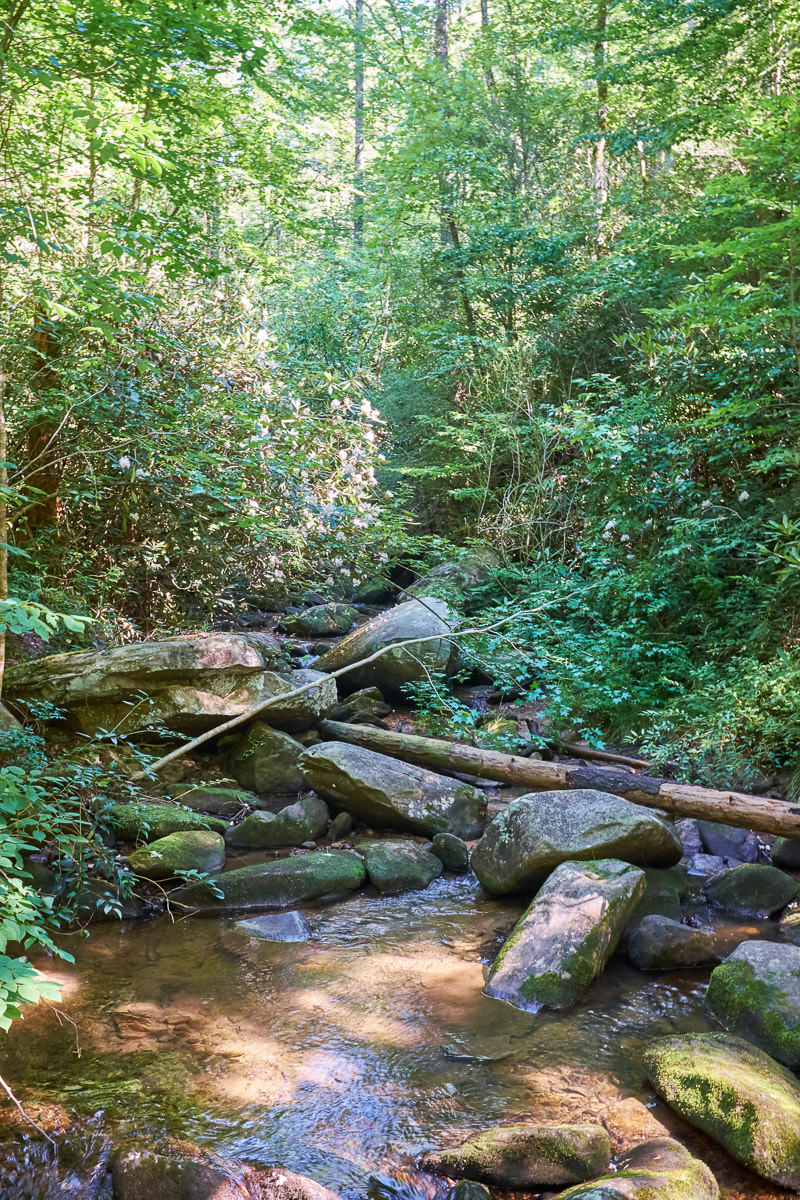 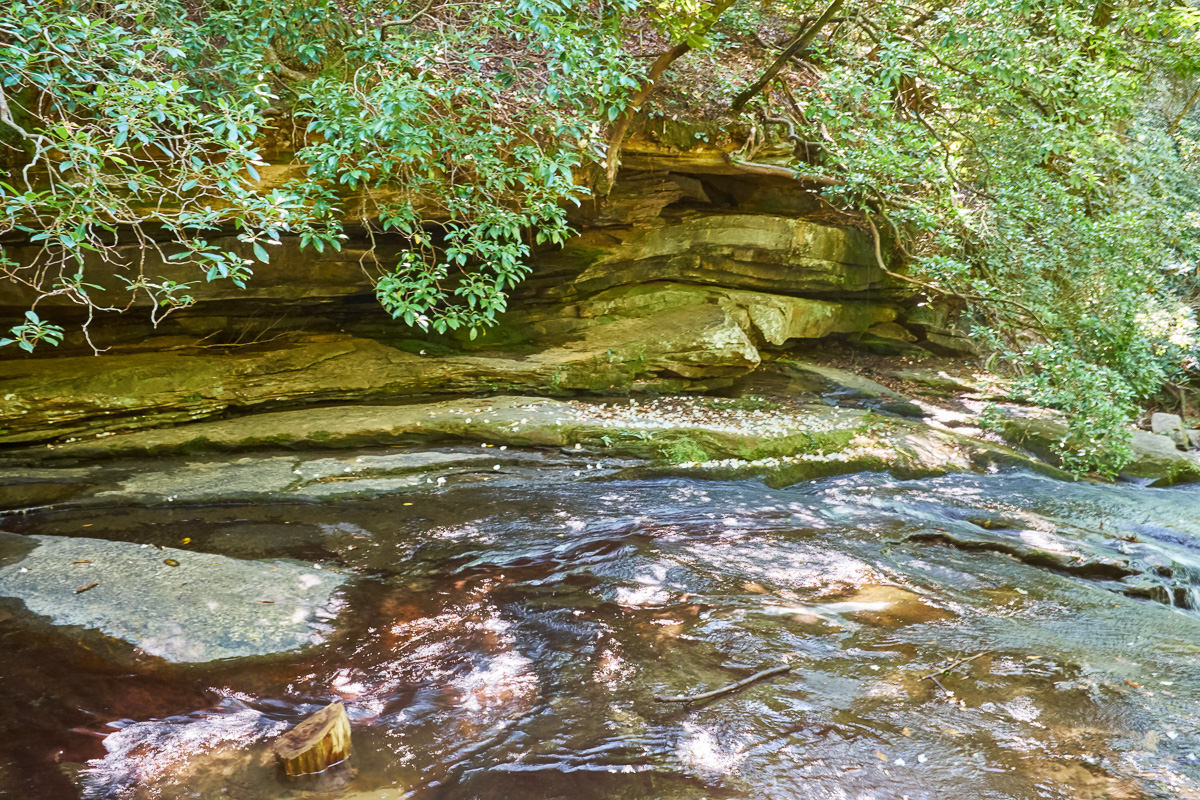 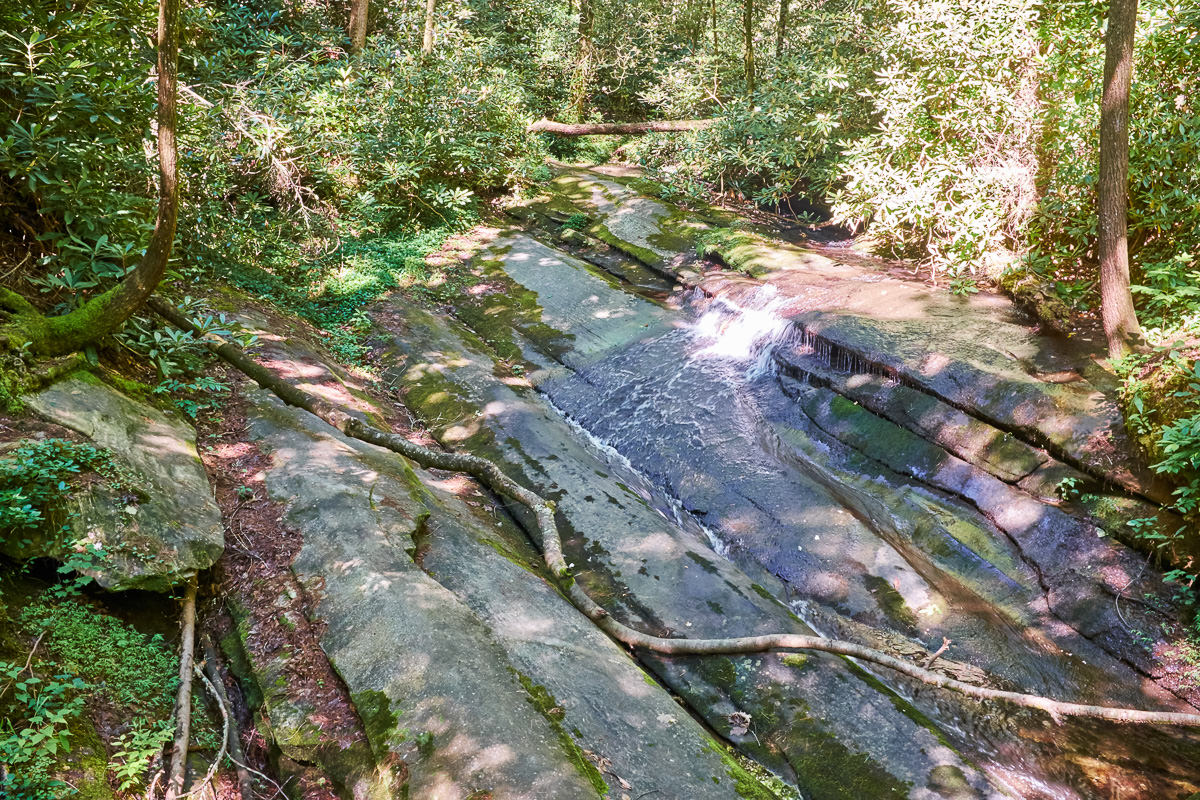 After a few stream crossings, you arrive at the first decision point: 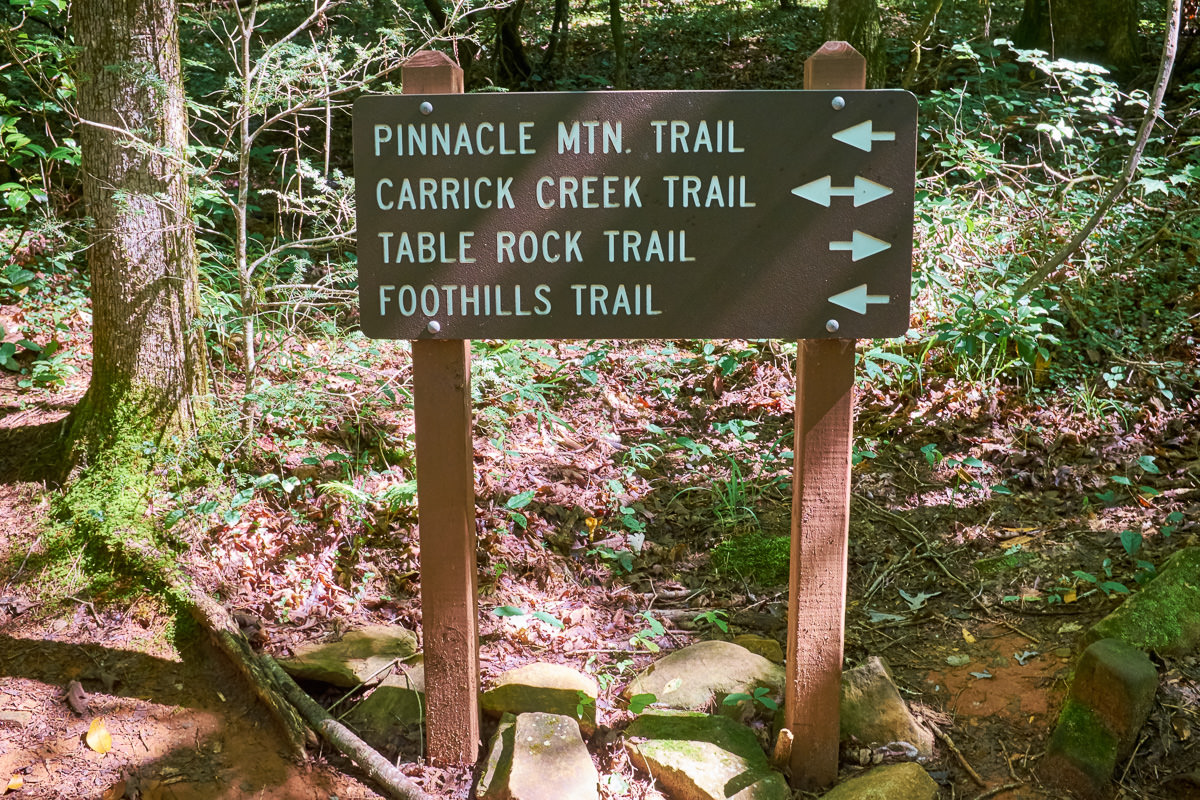 Pinnacle Mountain Trail is another tough summit, but promises more bears (!), so I’ll get to that one eventually. The Carrick Creek Trail is a shorter loop that sticks to the lower elevations and is supposed to be quite nice, so I said to myself that I might hit that on the way down. LOL. There is another sign to the left that has mileages for the Foothills Trail, which apparently connects to another park 76 miles to the west. That is not on my list.

I continued on the Table Rock Trail, which started climbing almost immediately. A few more stream crossings awaited as I switched back and forth up a hill, and each of these little crossings had wonderful little tiny waterfalls, usually 3-4 feet wide and 1-2 feet high. I figured I should conserve my energy for the climb ahead and that I might photograph them on the way down. LOL. 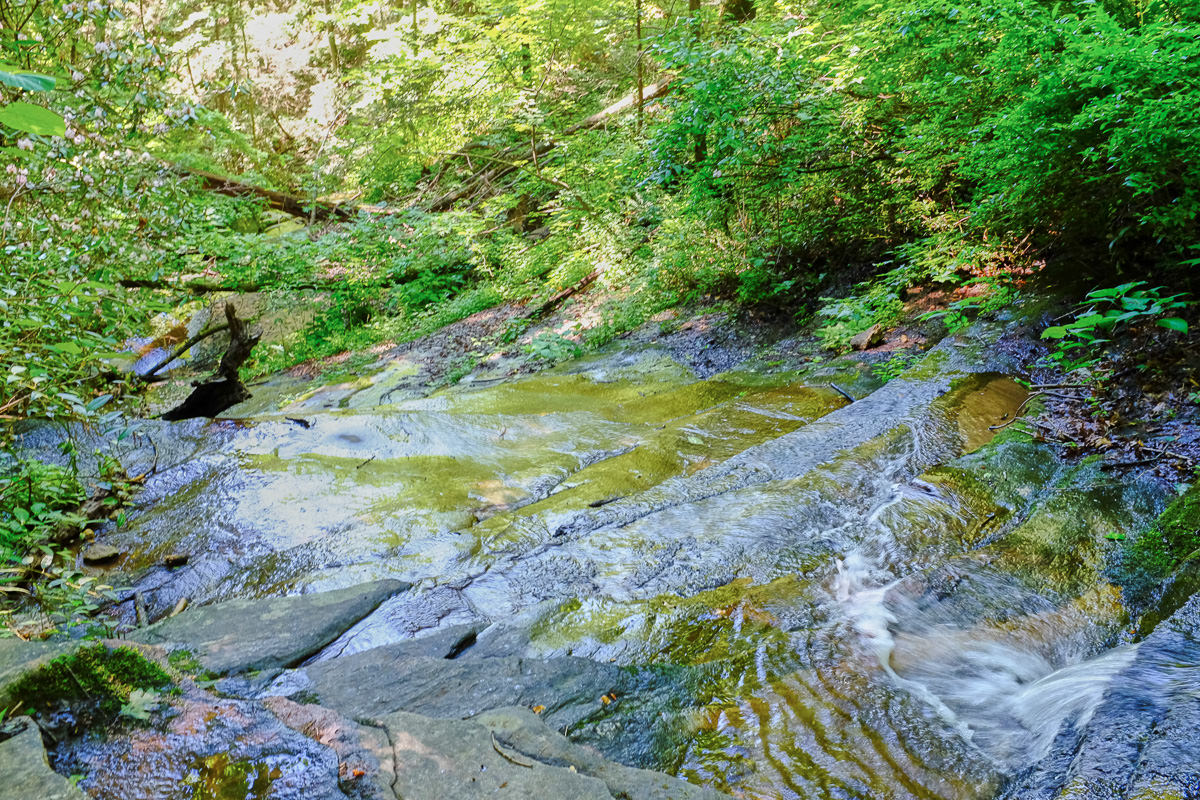 The forest here is lush and gorgeously green, with occasional bursts of other small flower colors. 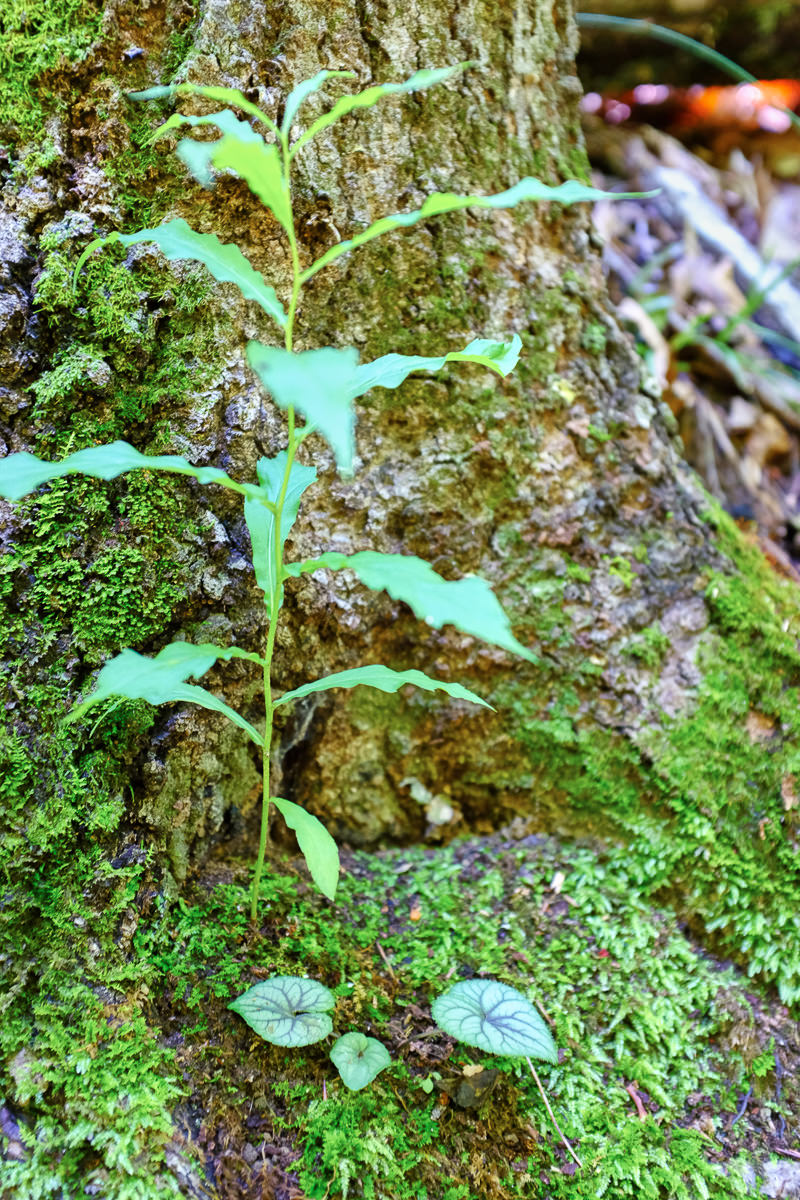 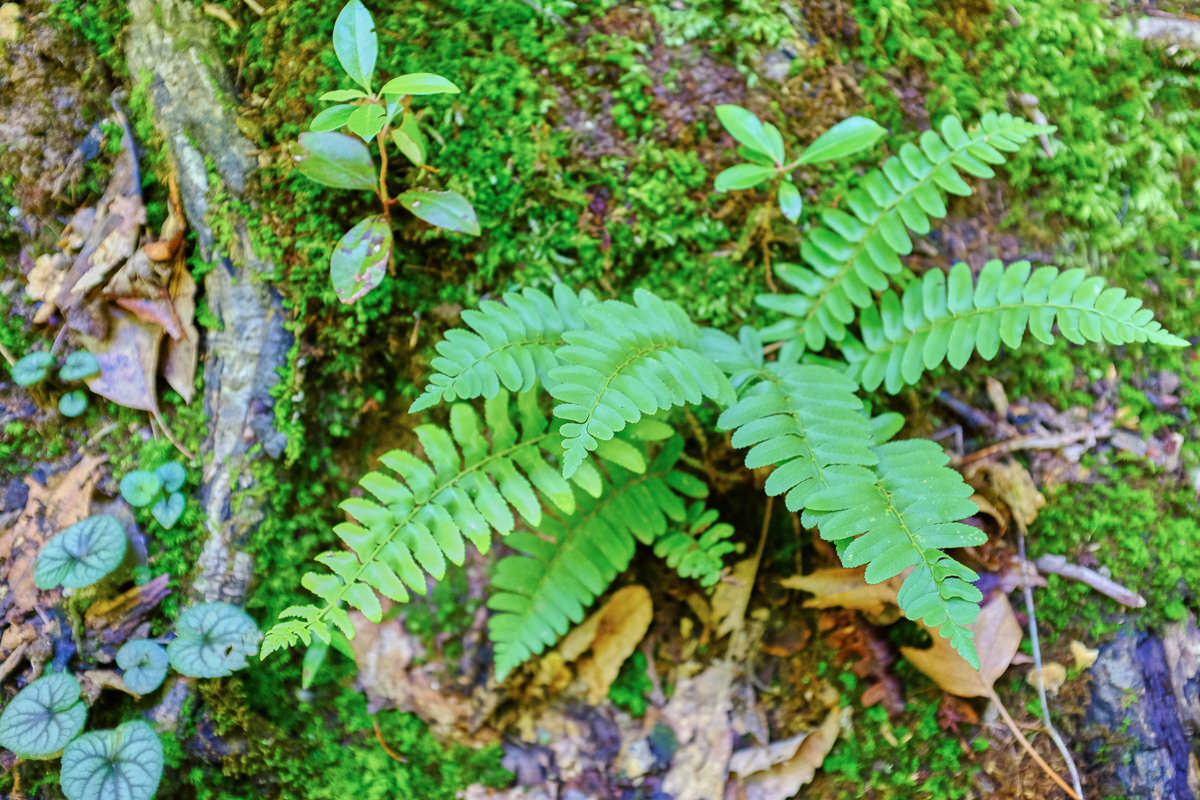 It’s also strewn with massive boulders that you hike around as the trail winds around, some of which you can climb on after you hike around them (this activity will not be pictured by this solo hiker). 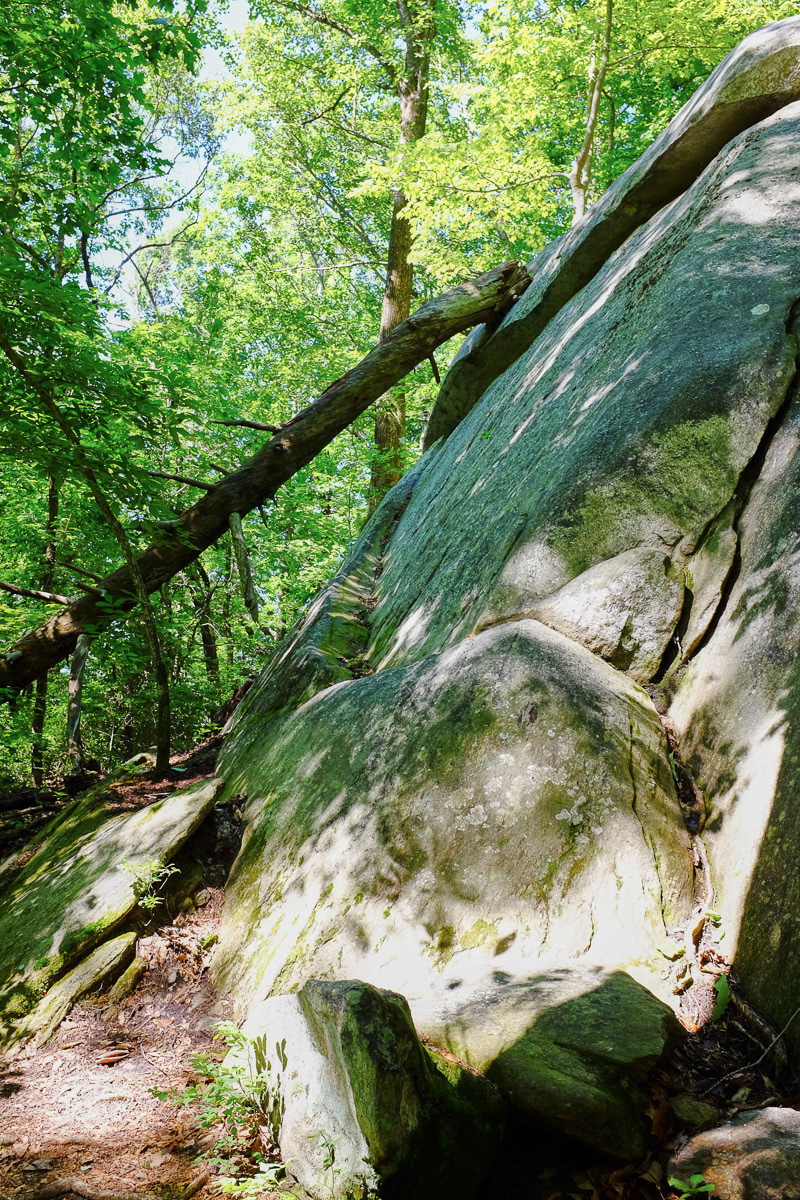 This is constant uphill at this point, and not easy uphill, either. You’re constantly pushing up from one rock to another, getting both the lungs and legs burning. Here’s an easy section: 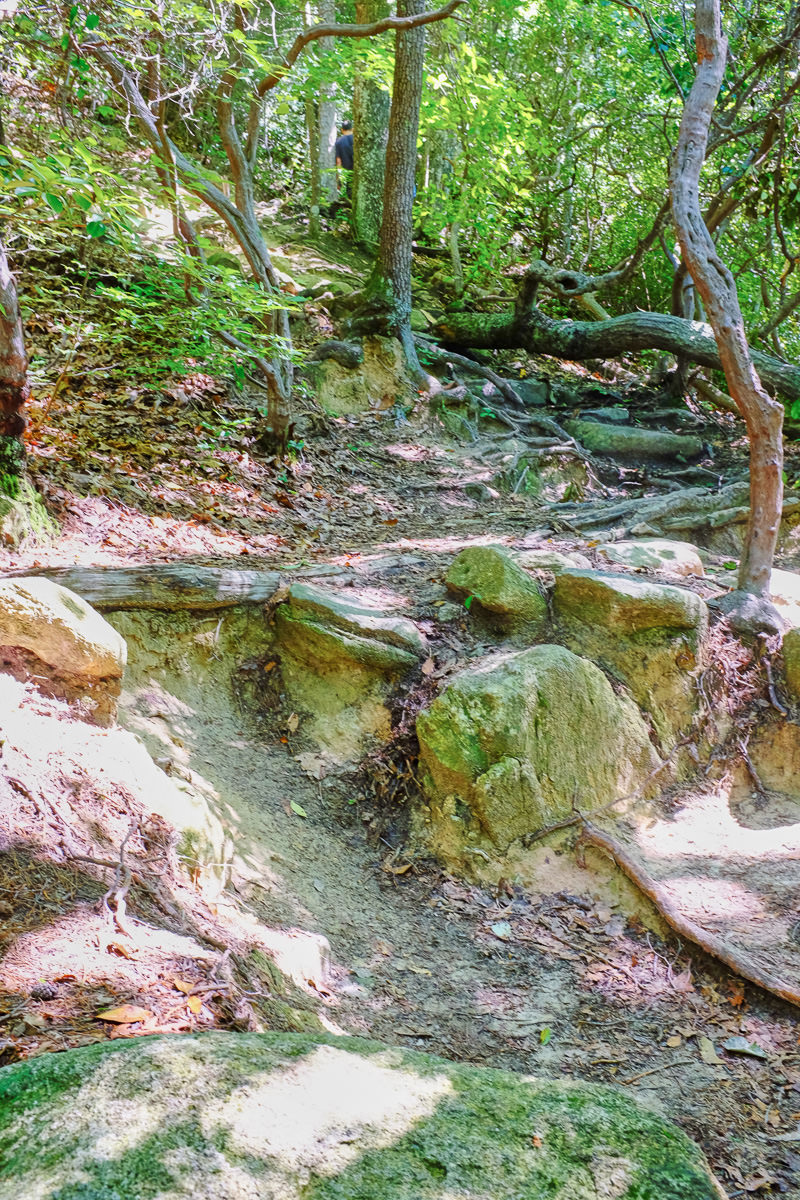 And, no, it was not just me working hard to get up the hills. In fact, it was around this point that I encountered a couple taking a break, and used it as an excuse to take a break myself. Recent transplants from Orlando, we had many things to discuss as we recaptured our ability to breathe. They had hiked this same hike one week prior, and liked it so much that they were back. We would hike together on and off all the way up the mountain, and also visited for several minutes at the overlook. This would be a theme for today – social activity on the grueling trail.

Proof I was sweating: 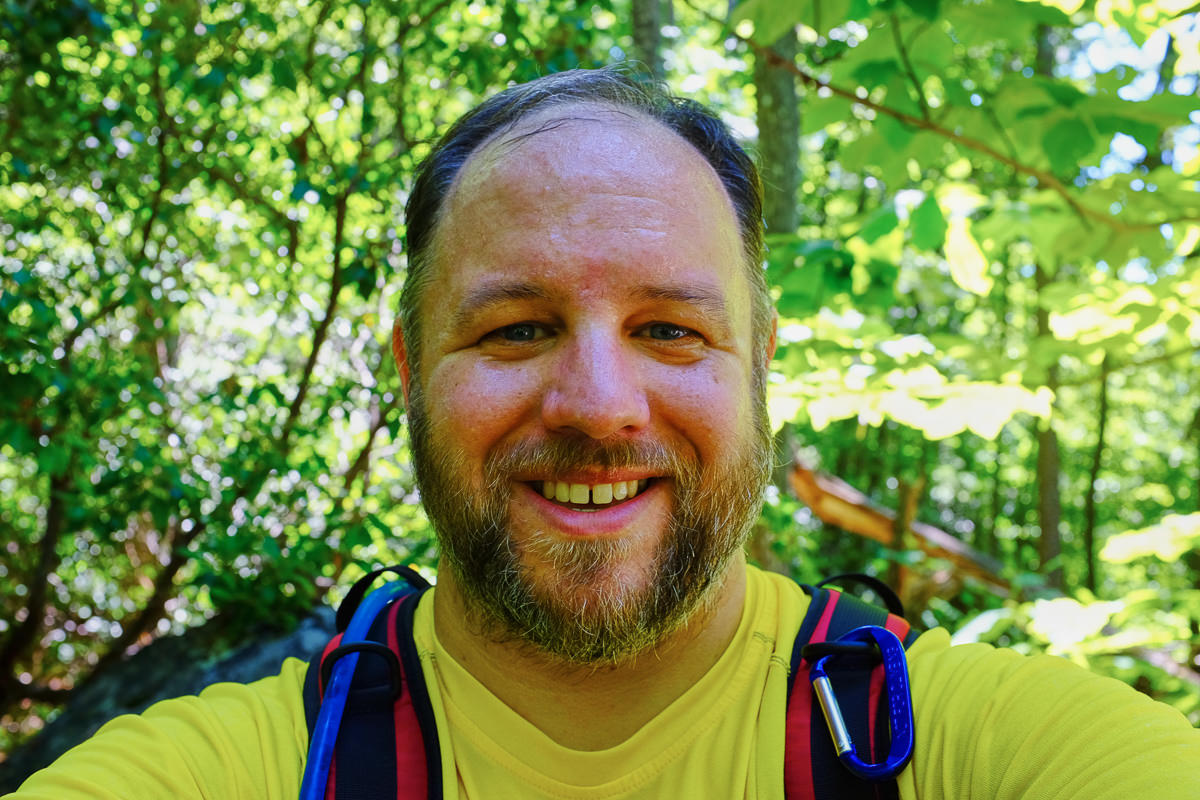 In an occurrence that I’m still not sure how I feel about, the trail is marked with mile markers. Shit, one mile? I’ve only gone one mile?! And they also have a great little rest hut halfway up the mountain, where I took a seat and gobbled down some snacks. Just up from the hut is a large flat area with beautiful views to the southwest – this is not pictured here because once I left the hut I felt the need to keep moving, or I might have turned around, which actually happened to the group who was at the hut with me. 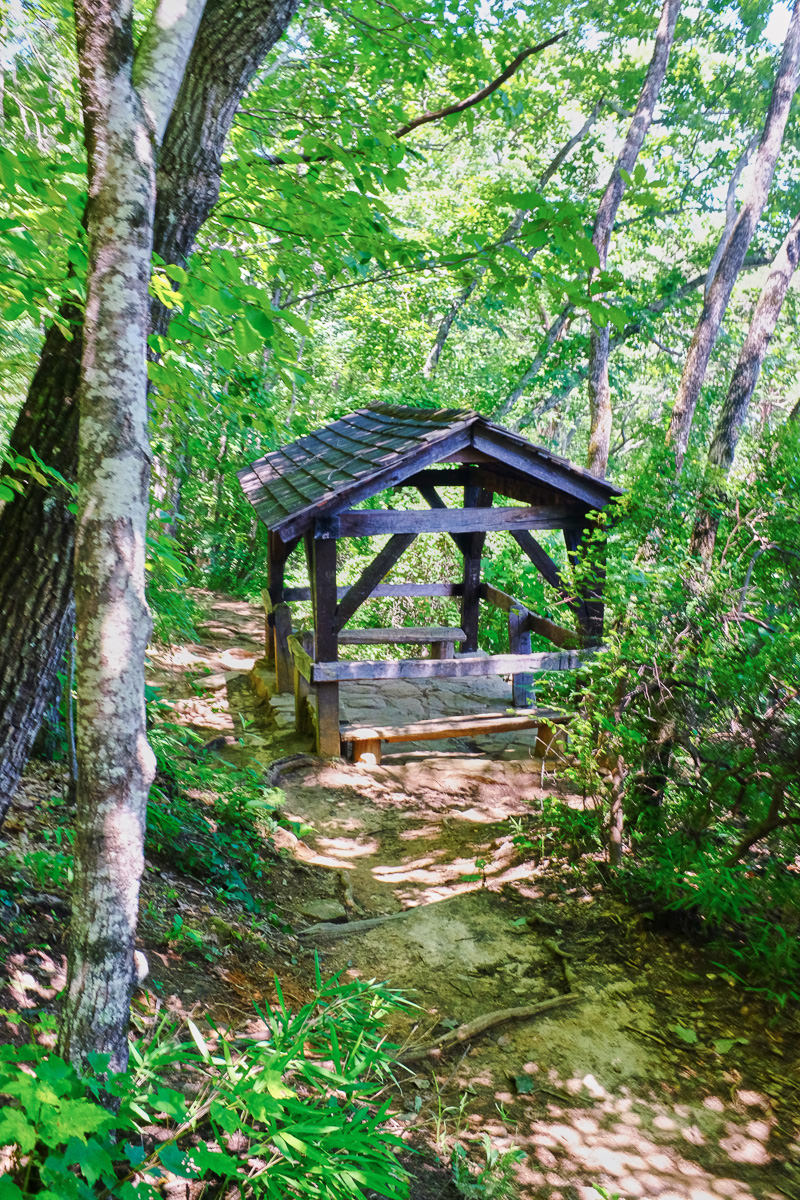 After that, it’s more climbing. Climbing, climbing, climbing. Some time after leaving the hut (I never saw the two-mile marker, either going up or down), and literally climbing up some rocks, I arrived at Governor’s Rock, which was an absolutely stunning view. 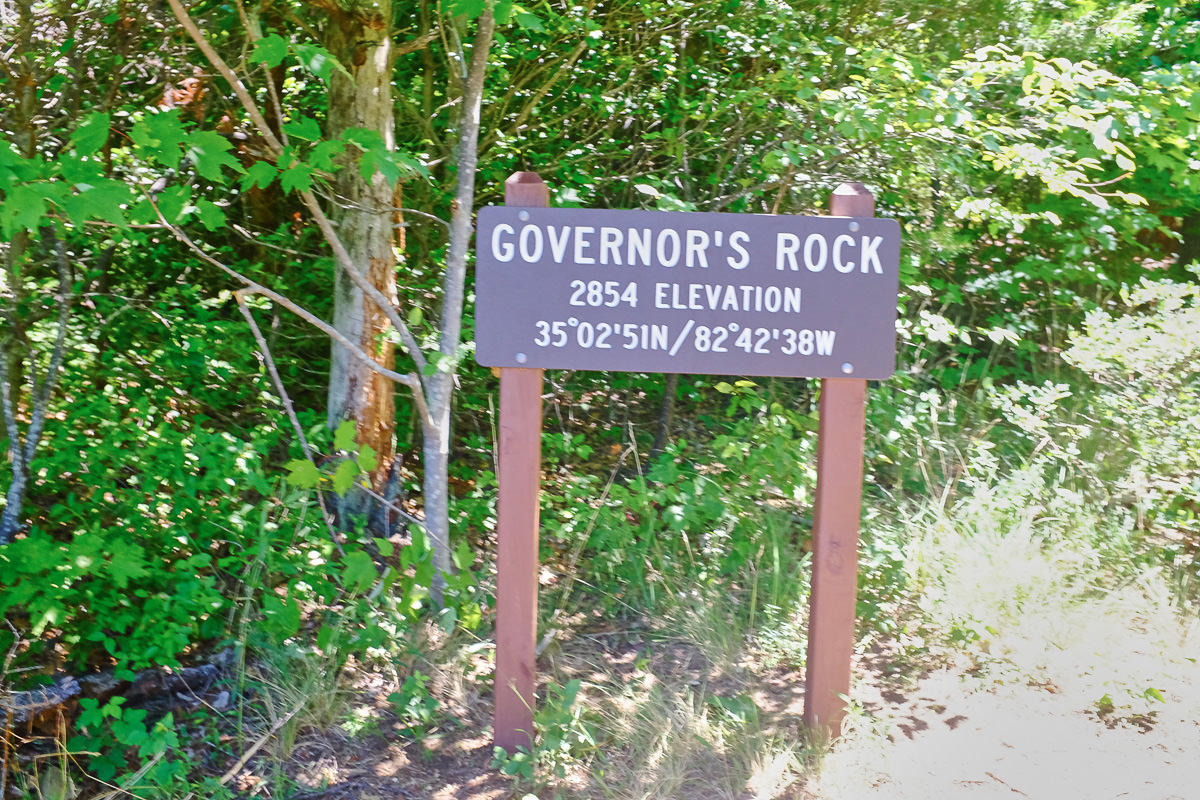 Okay, the sign’s not stunning, and you don’t even see the sign until you try to figure out how to continue up the trail. The edge of this open area is dotted with tiny grasses and flowers like this: 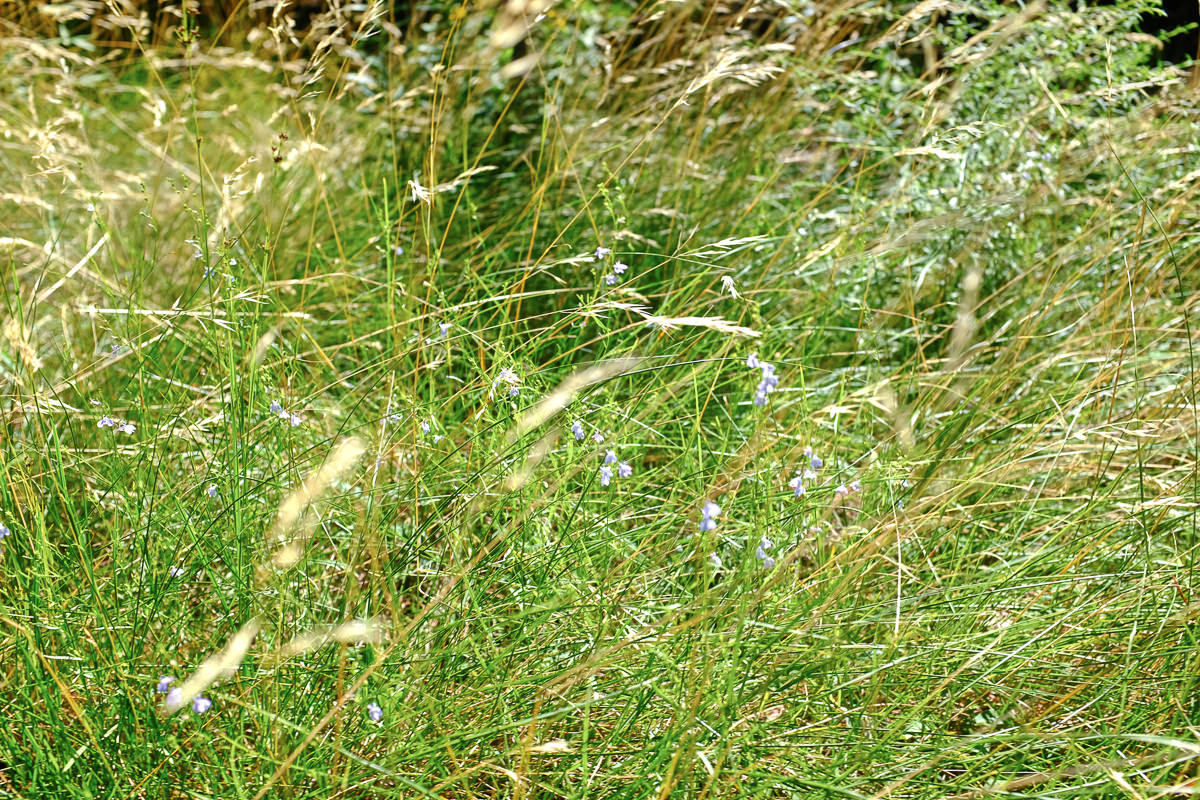 I know, I know, I promised stunning and haven’t delivered yet. How about this? 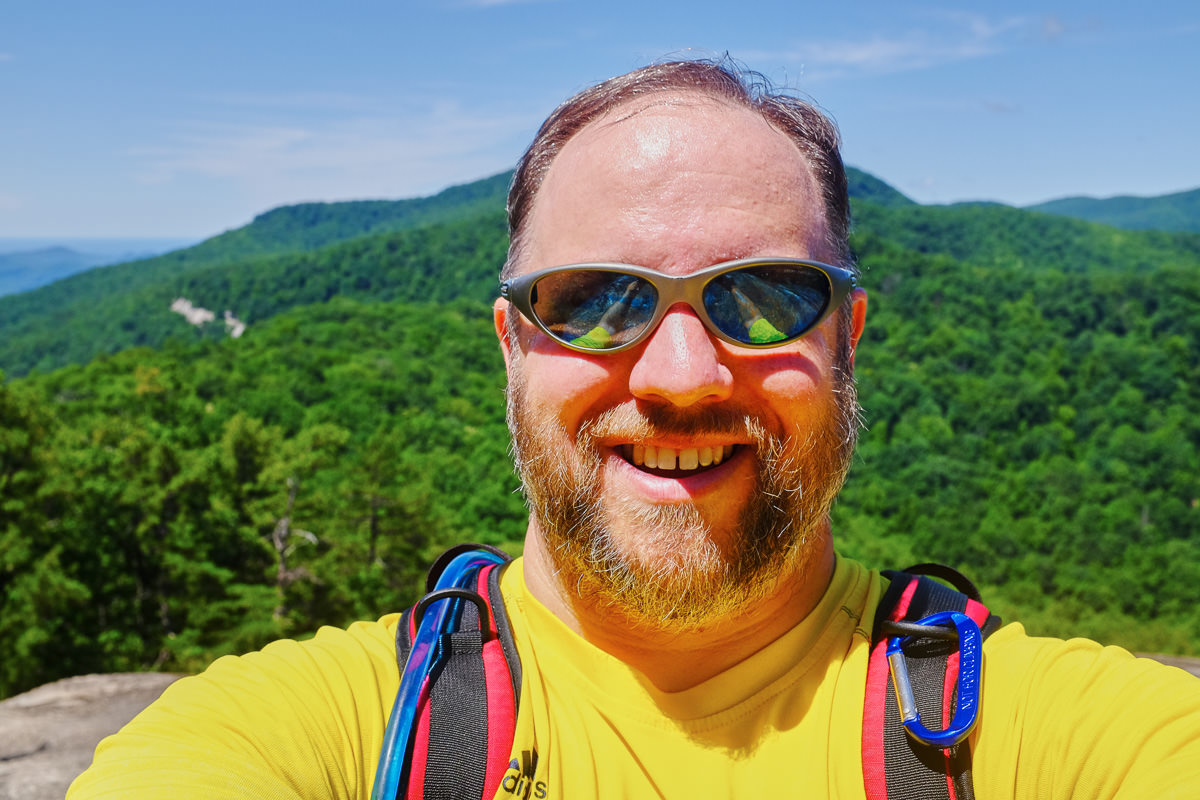 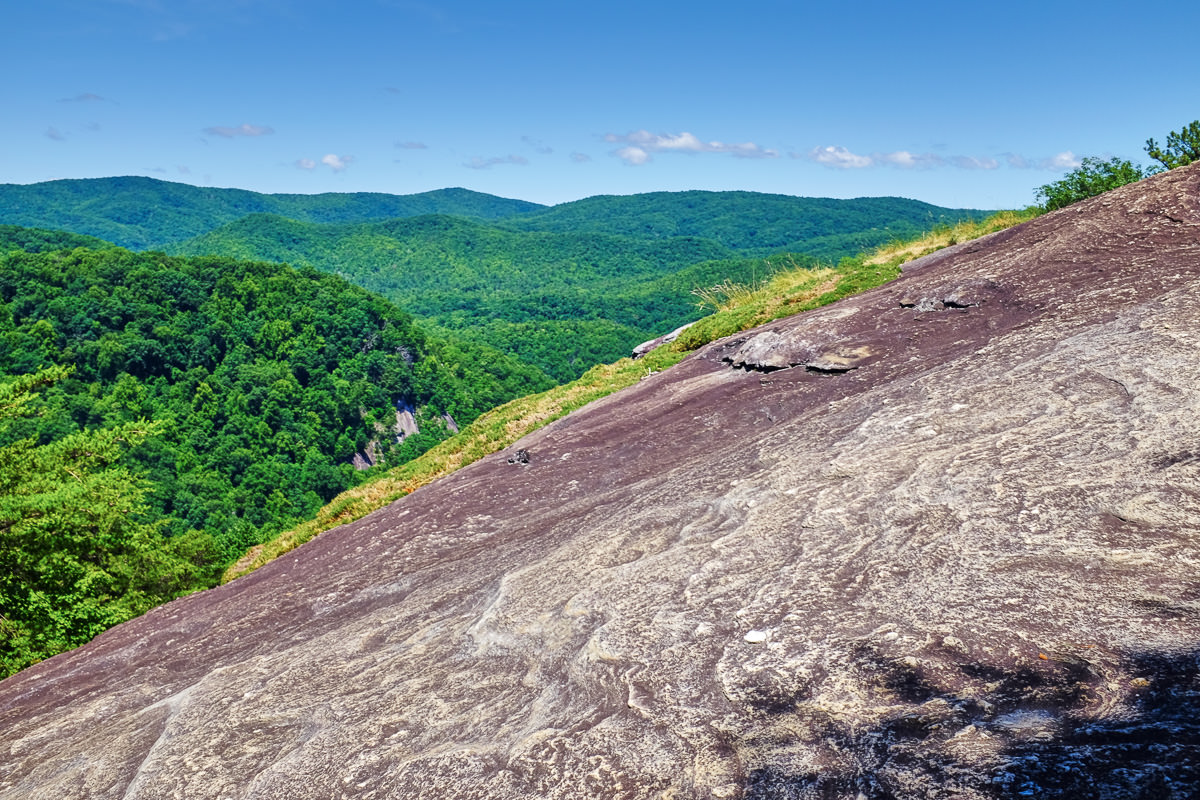 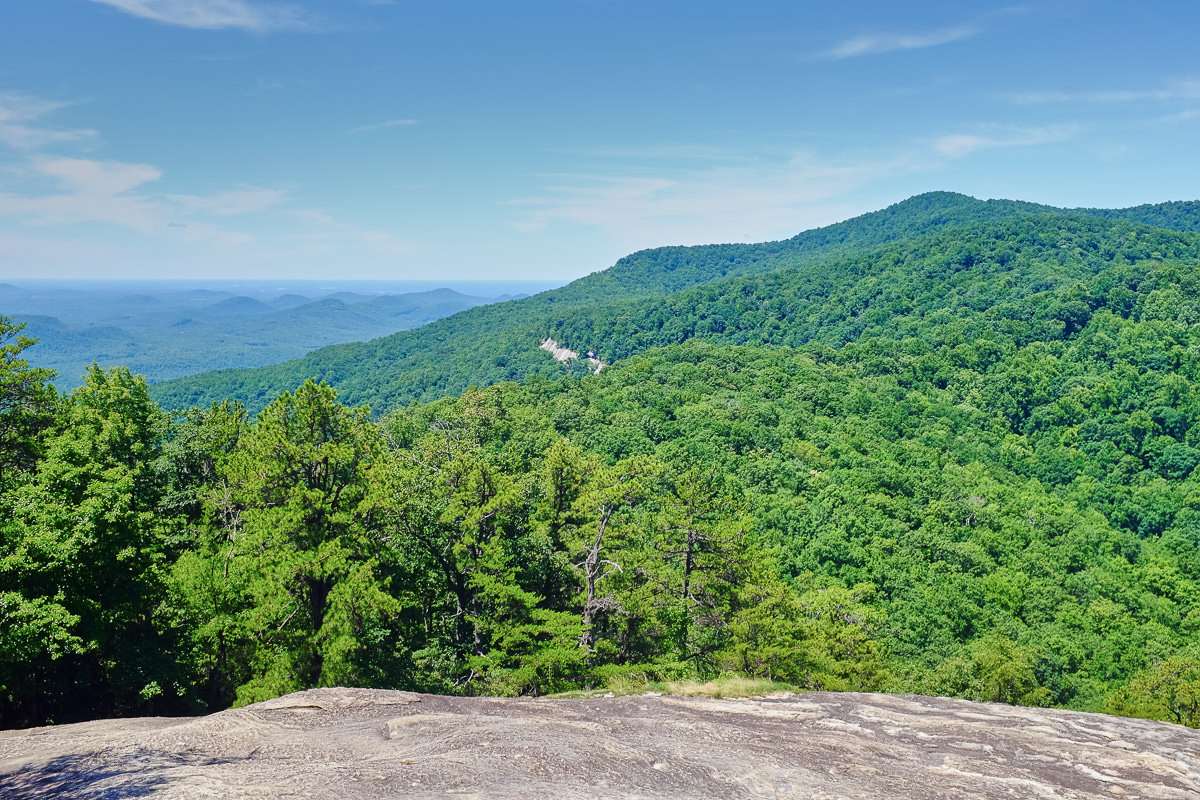 My new friends and I hung out here for a few minutes, chatting about DisneyWorld banning selfie sticks, among other things. Then it was back to the grind, more of this: 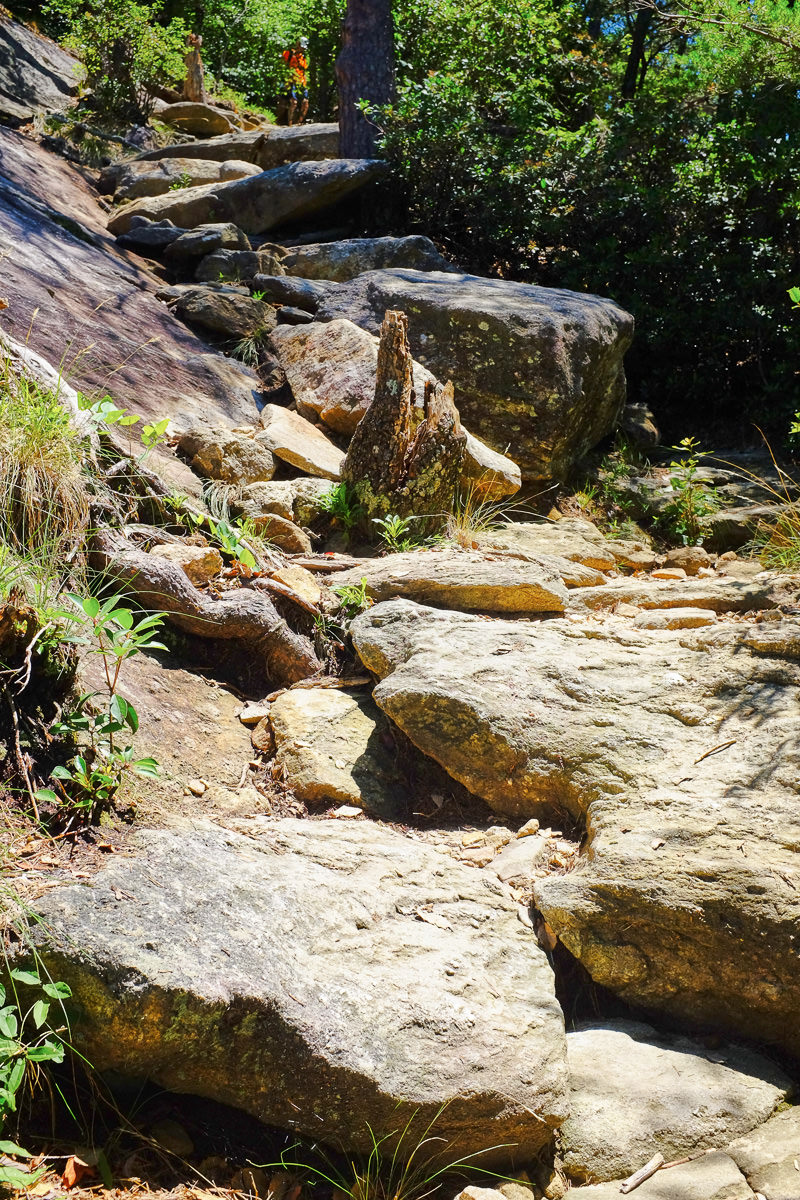 After a whole bunch more of that, flat rock openings started to appear along the right side of the trail, granting panoramic views of the whole area. Note the lake in this picture; as that’s about where the trail starts, and also where I would cool off when I reached the bottom. 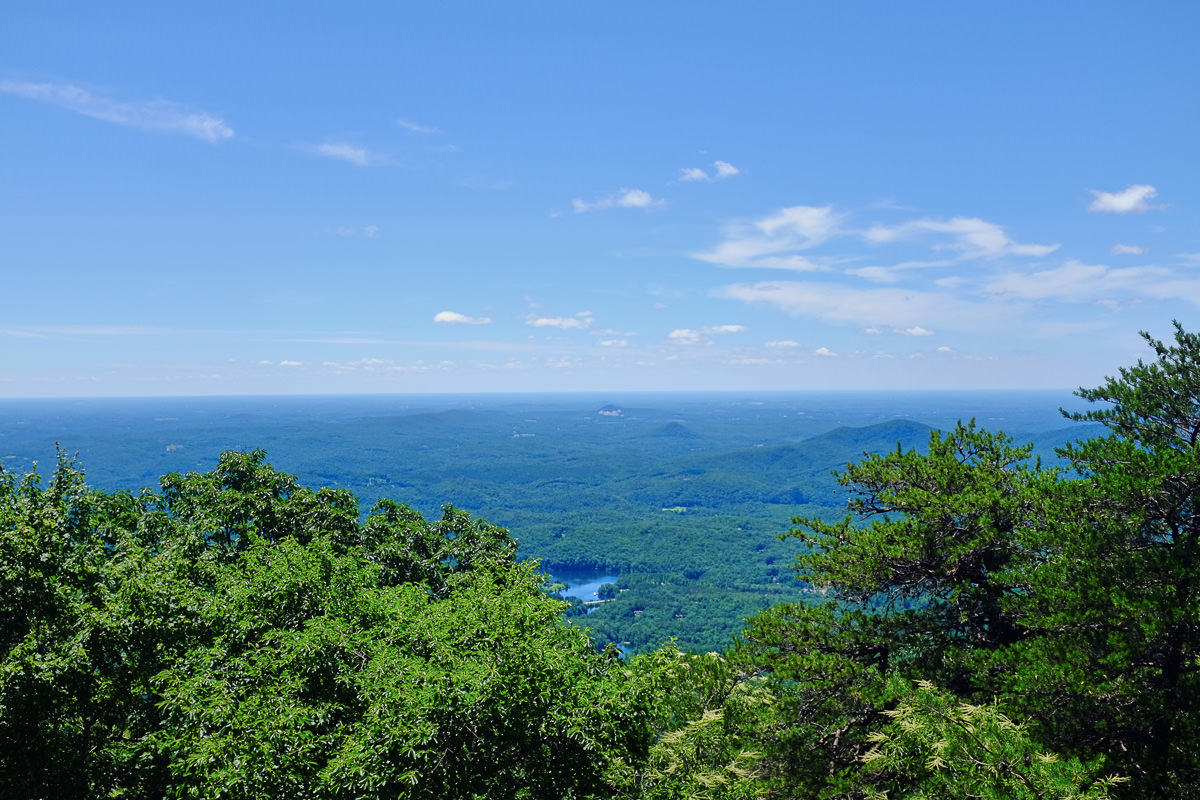 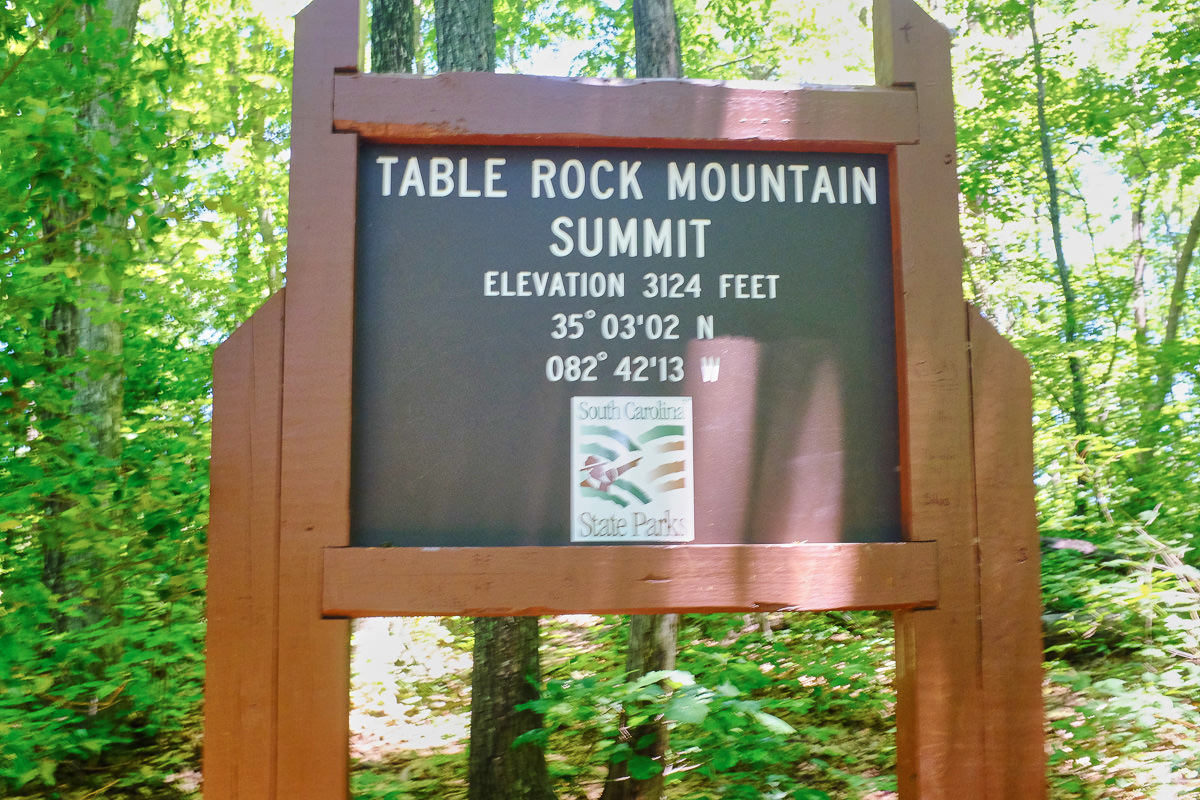 Finally! The Summit! Of course, there’s actually nothing at the summit other than a sign. And another sign to the right, which points to the right, and says “Overlook.” That’s where the good stuff is, though you actually have to hike down another 300 feet of elevation to get there. Again, there were some nice open views sprinkled among the woody trail. 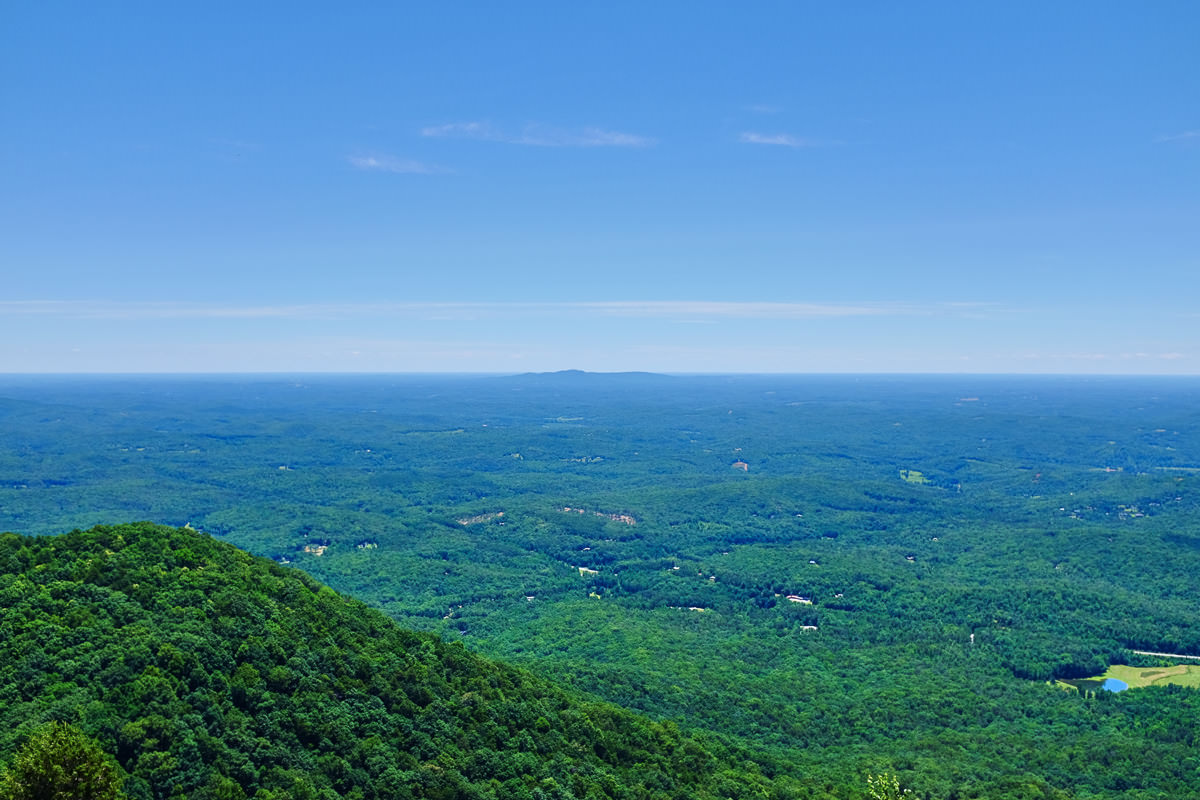 That mountain in the distance is Paris Mountain State Park, and downtown Greenville is a bit further and slightly to the right of Paris Mountain. 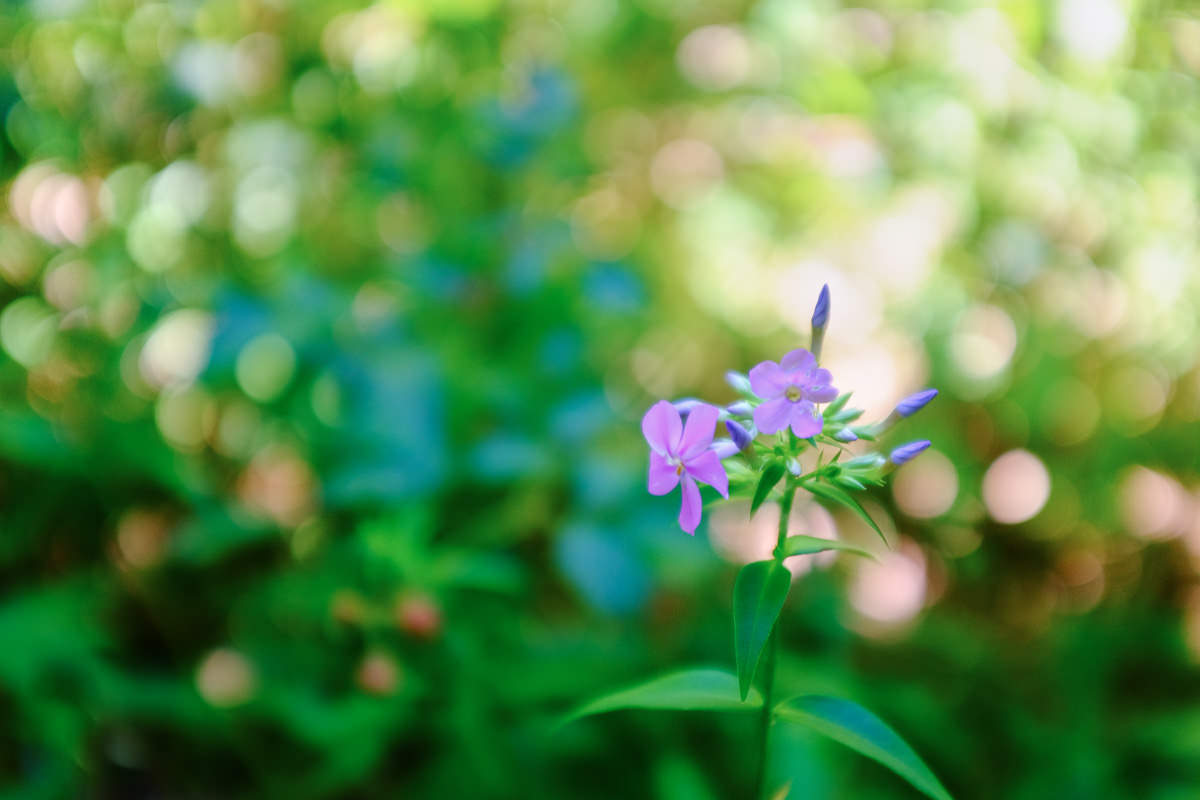 When you finally start to get near the overlook, you emerge from the woods to see this awesome view: 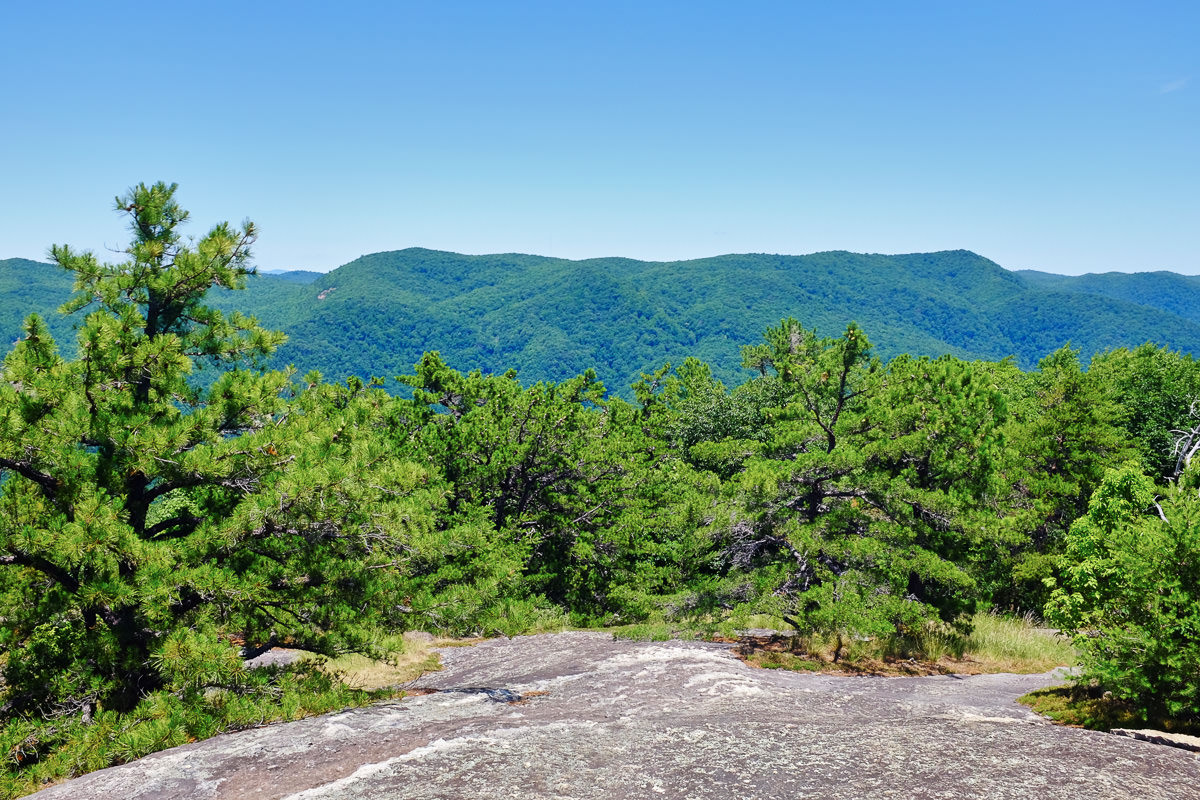 Up here, the rock is covered with all kinds of mosses and lichens. Here’s a particularly interesting one I shot close-up. 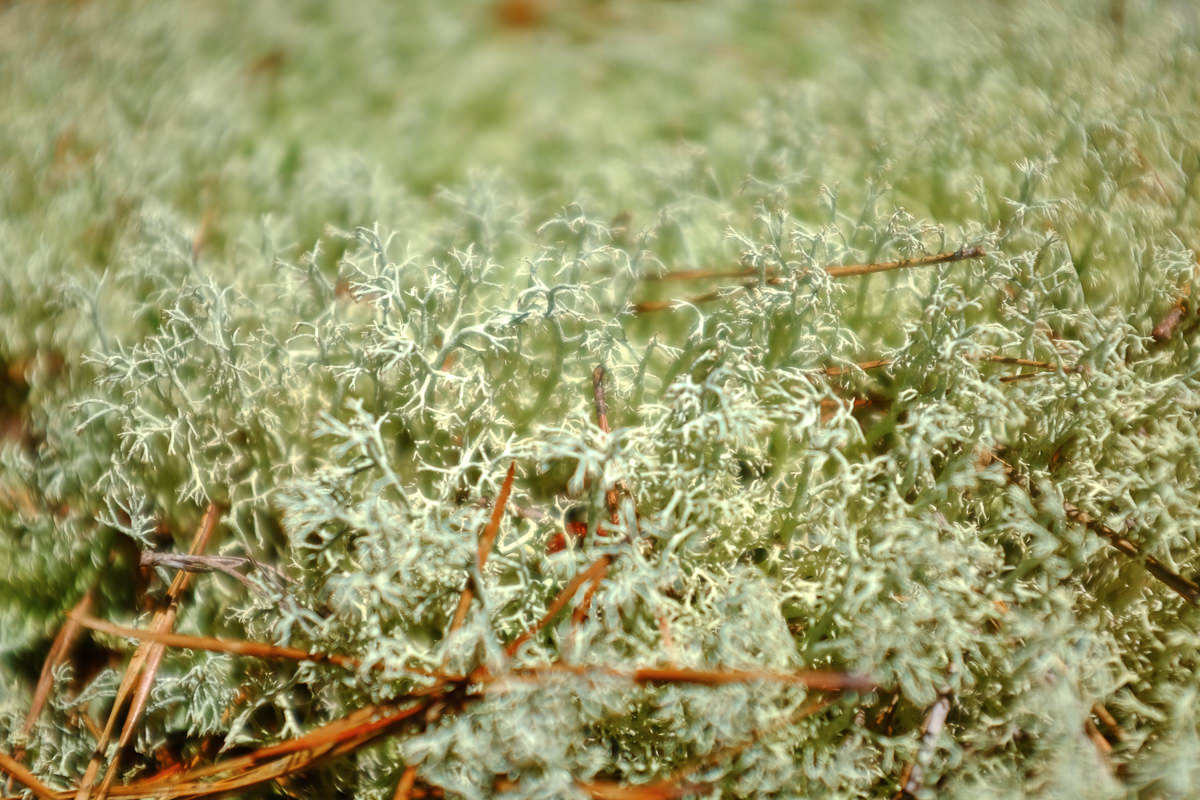 Follow the red blazes on the rock for a few minutes, and you’re finally reward with a view of Table Rock Reservoir, which supplies the water to Greenville. 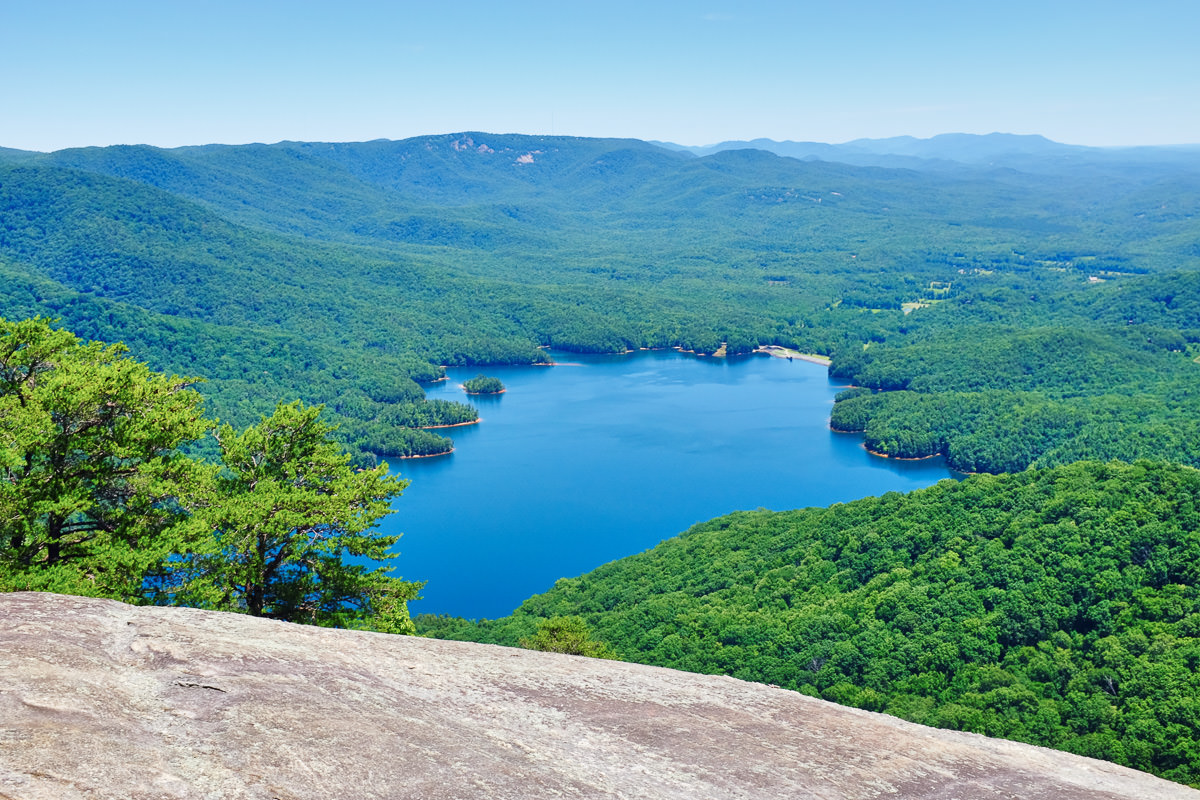 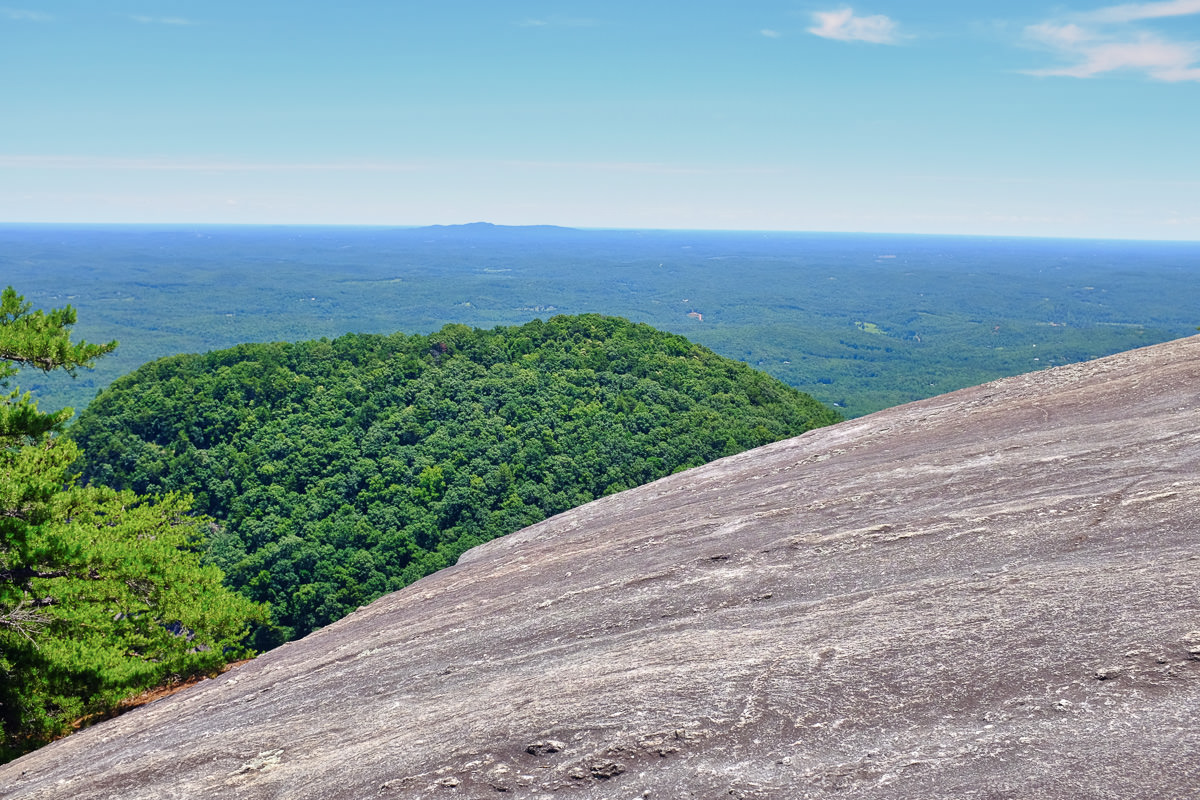 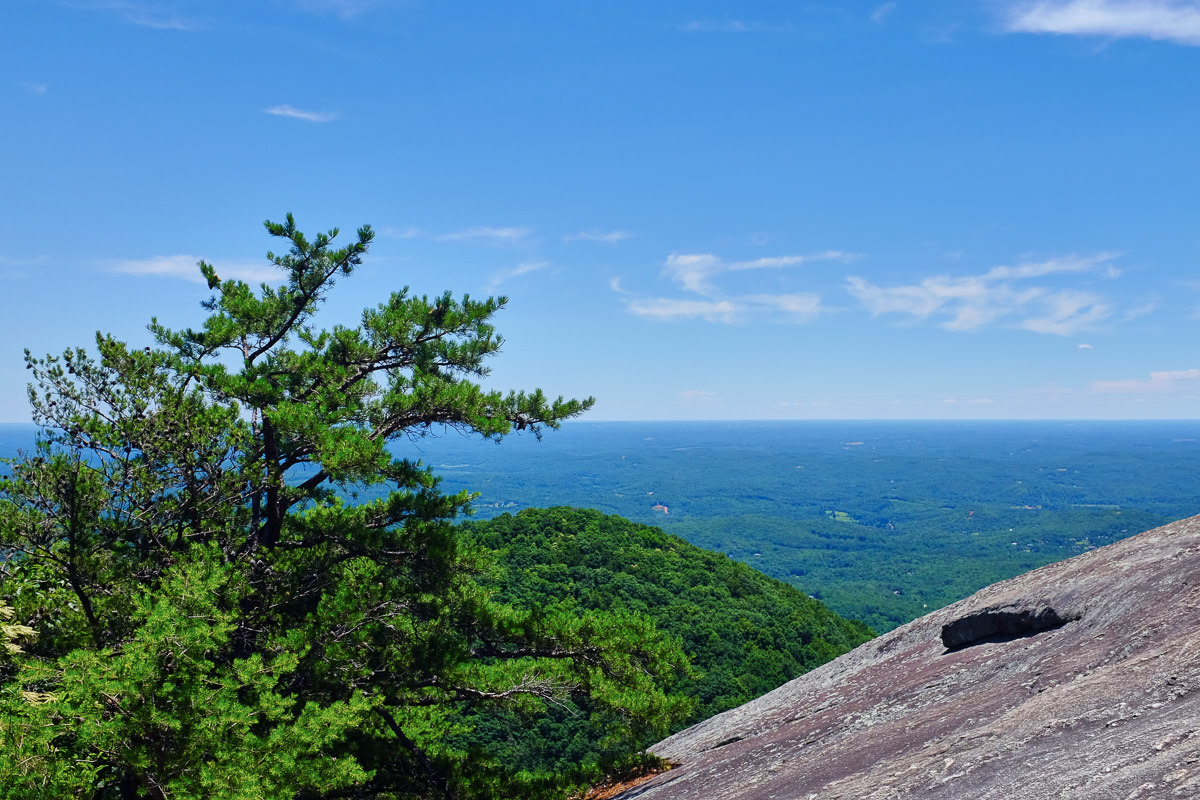 This area has probably a 250-degree view from Northwest to South. It’s a great spot to find a place to sit and recover from the brutal climb just completed. I found a quite spot in some shade and gobbled down some celery, carrots and almonds (the snacks I forgot to take with me yesterday). I also drank the last of my 80 ounces of water, lol, and chatted with my transplant friends some more.

As I parted from them and hiked back up the rock to begin my return hike, another couple stopped me and asked if I was from Michigan (I was wearing a Michigan shirt, natch), telling me they went to Michigan State and moved down to Greenville over the past few years. They were serious hiker types, so I got some ideas from them about places to add to my list. This happened three other times on the way down, where I had 5-10 minute conversations with friendly folks, some natives and some transplants. I love the south. 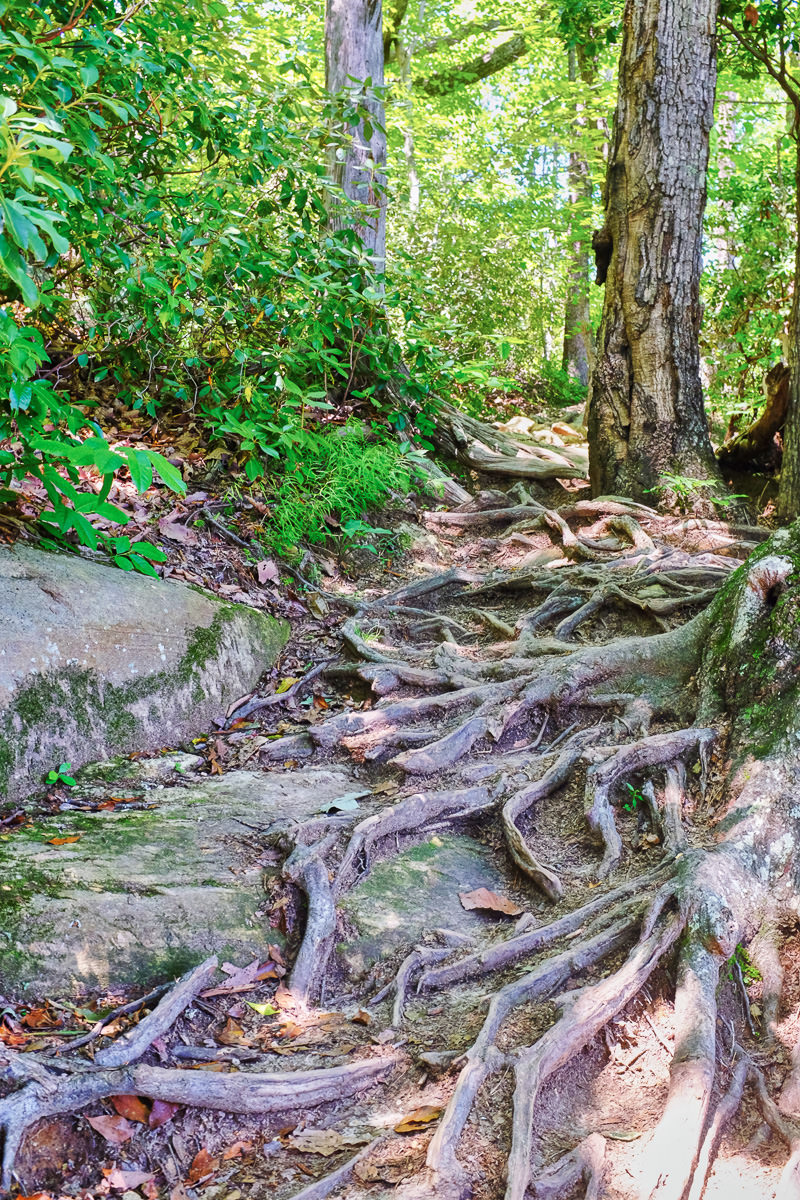 I actually found the way down pretty tough, because the steps/drops are so big that you’re continually pounding on your feet/knees. I made pretty good time, though, and took the picture of the day when I stopped again at Governor’s Rock on the way down: 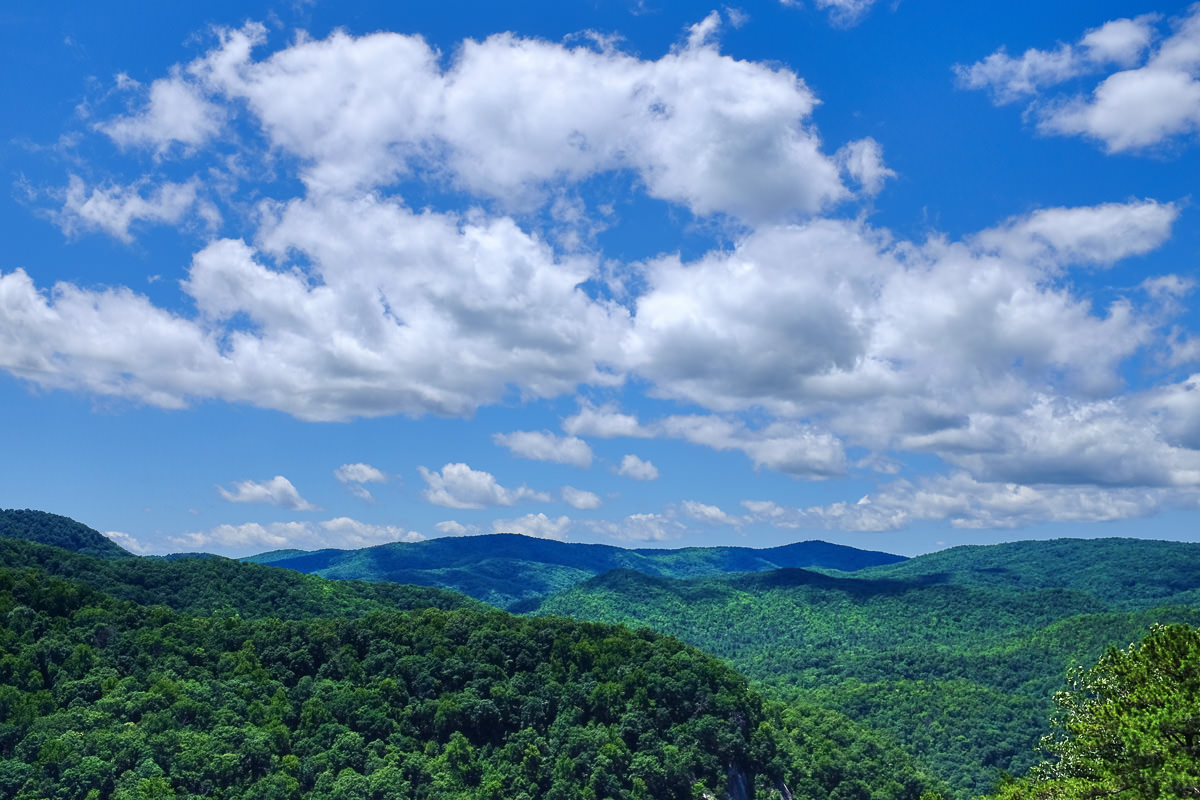 It doesn’t get much better than that. Crystalline blue sky with clouds that shadow the distant hills. That’s the first four-star rated photo I’ve taken down here – no five-stars yet! A couple of ladies here asked me to take their picture for them, which I also did for several other groups throughout the day – all with smartphones though, no cameras. It really makes me want to pick up a Fuji Instax printer, so I can give out actual printed pictures from this awesome little camera right on the spot.

Anyway, I pounded my way down past the halfway hut, then mile 1, thinking about what I was going to eat tonight most of the time. Around mile 1 though, I started thinking about taking a swim in the lake when I got down to the parking lot, since the parking lot is for both the trails and the lake. Spotted this guy about a half-mile from the trailhead: 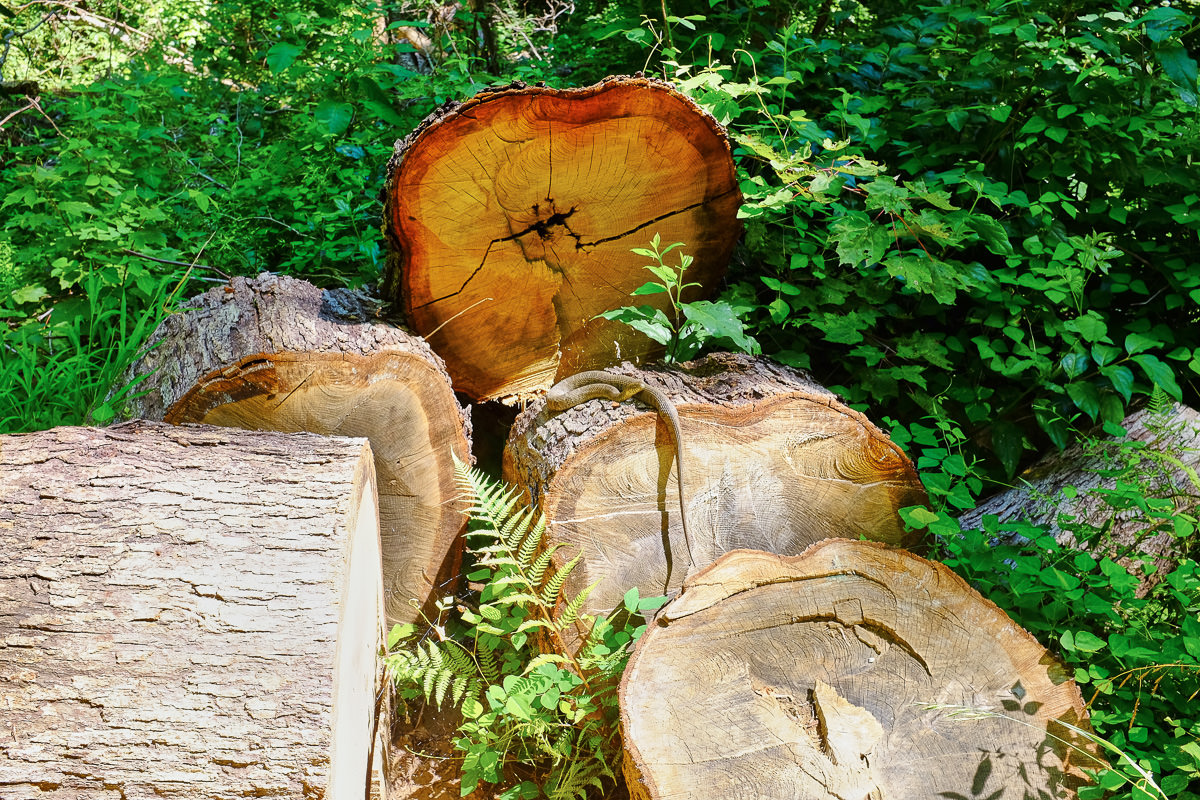 I had an extra shirt in the car, and I always have a couple of golf towels with me, so I took off my boots and hiking socks (one of the best moments of any hike!), switched into flip-flops, then headed down to the sandy (!) beach and hopped in the water, which was wonderful. Sorry to everyone else in the lake (there were tons of people there) about the whole rinsing-off-five-hours-of-sweat thing.

And then I discovered that there was a little shop and snack bar right at the beach, too, so I picked up a blue raspberry slushy for the ride back to town. They also rent paddleboats, canoes, and kayaks, and they’ve got cabins for rent right around the corner as well. Table Rock State Park is pretty cool, and a great place to have 40 miles away.