Aly and I have a tradition of going to Saugatuck Dunes State Park at least one evening each summer for a hike, swim and sunset. This year’s date took place the week of July 4th, while I was back in Michigan. And yes, it involved finding clothing on “Naked People Trail”, as in past years.

Okay, it’s not really called “Naked People Trail”, at least not by people other than us. It’s an unnamed inner spur of North Trail. 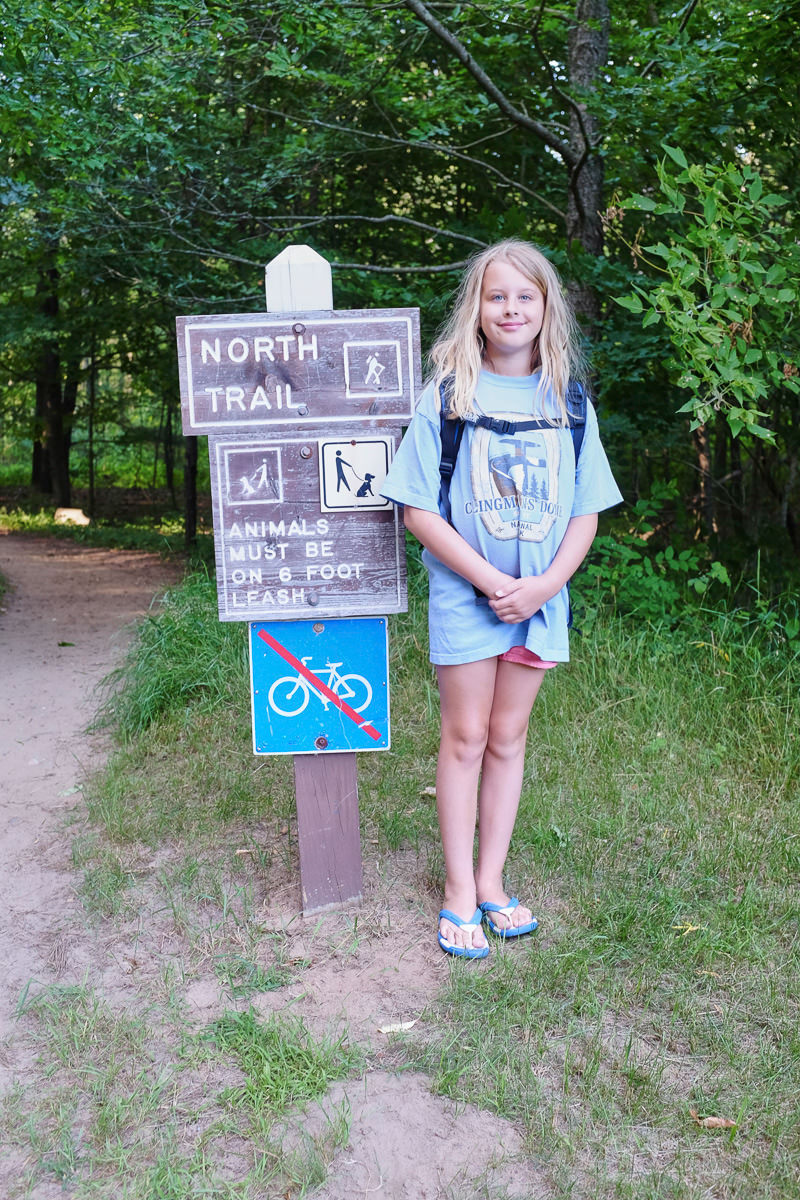 The air temperature was a bit of a shock to this new Southerner, with my car showing 62 degrees when we parked and hit the trail. The wind was howling in the trees overhead, and there was a beach advisory warning about large waves and the possibility of rip currents. Other than feeling like it was below 50 degrees with the wind and the huge waves, it was a beautiful evening to be in the park.

As I mentioned, this part of North Trail follows a ridge through the trees, before dumping into a sandy trail through huge oaks. At the point the trail becomes sandy, there’s a bench before heading downhill, and that’s where we found the first piece of clothing. 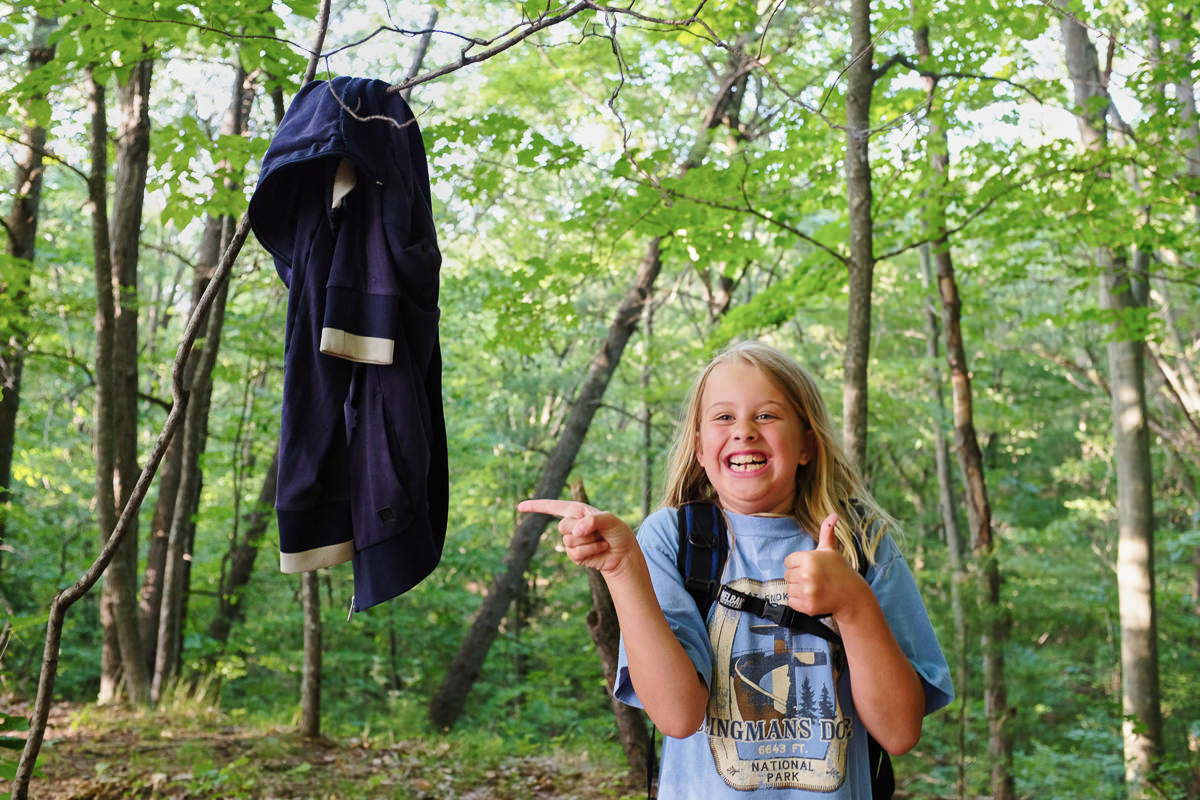 Aly’s excitement was genuine. This clothing was much further from the beach than any of our previous discoveries along Naked People Trail – in fact, prior to this moment, I would not have even considered us actually being on NPT yet, as the trail of clothing usually begins down in the dunes just short of the beach. It wasn’t long before she found her second, still far short of the beach. 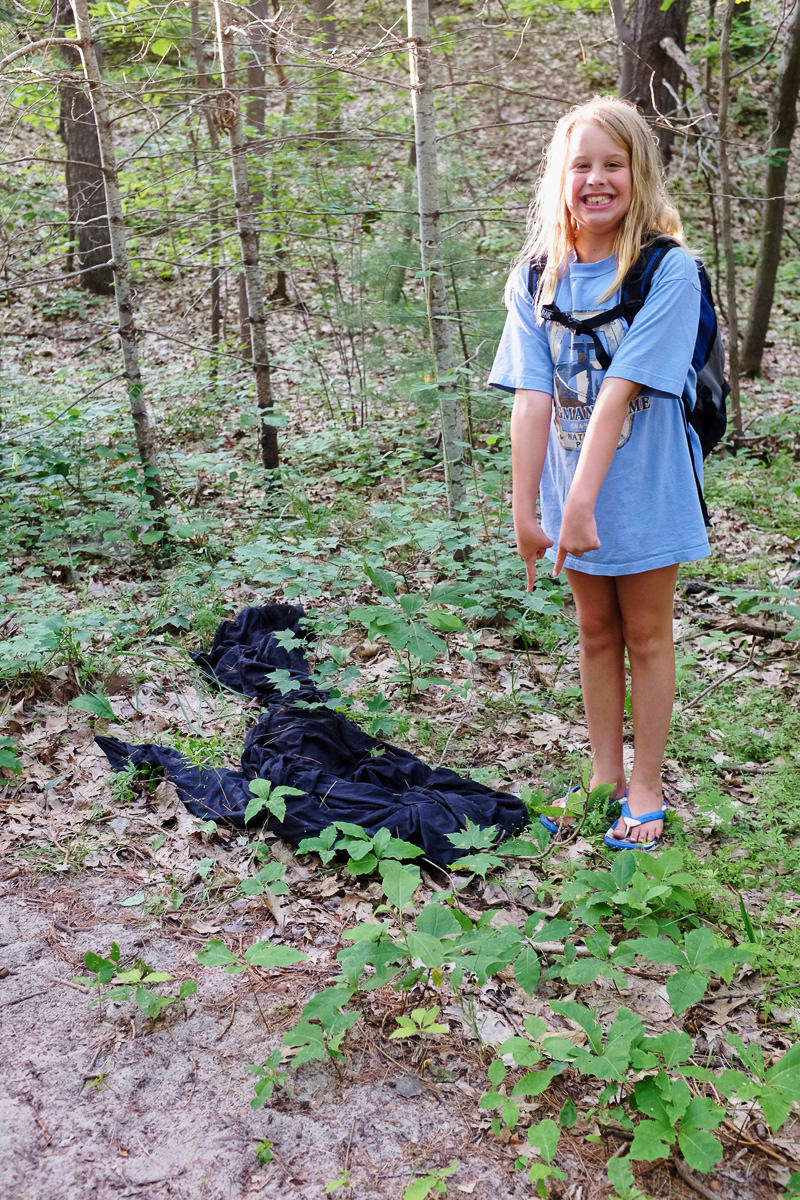 Around this time, she was showing the tell-tale signs of needing a bathroom, despite their not being one anywhere nearby. I sent her over a small ridge a few yards off the trail, with no worries about encountering other humans since no one else was crazy enough to be out on this night in this part of the park. As she returned to the trail, she hollered and jump as she ran back down the hill, causing a herd of deer a hundred yards or so behind us to get spooked and cross the trail. Her rowdiness paid off.

From there, a sandy climb up to a high point delivers a beautiful view of the dunes, beach, and lake. 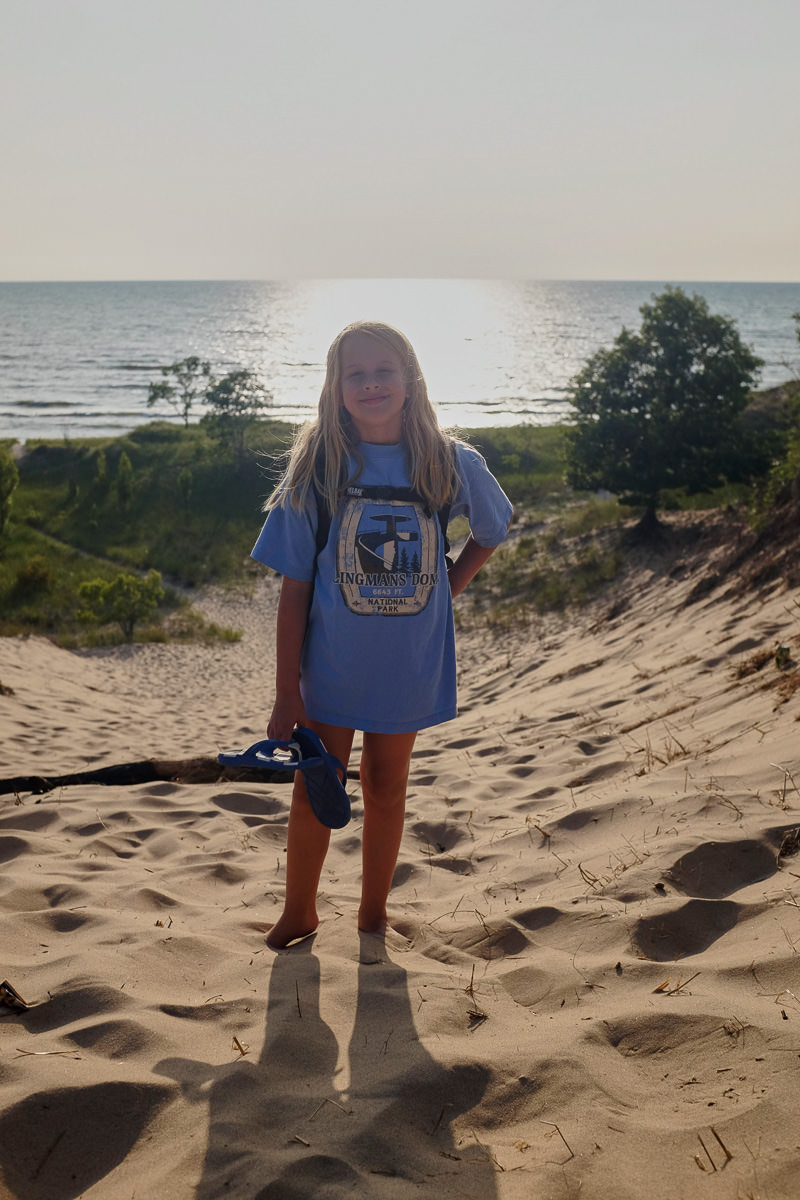 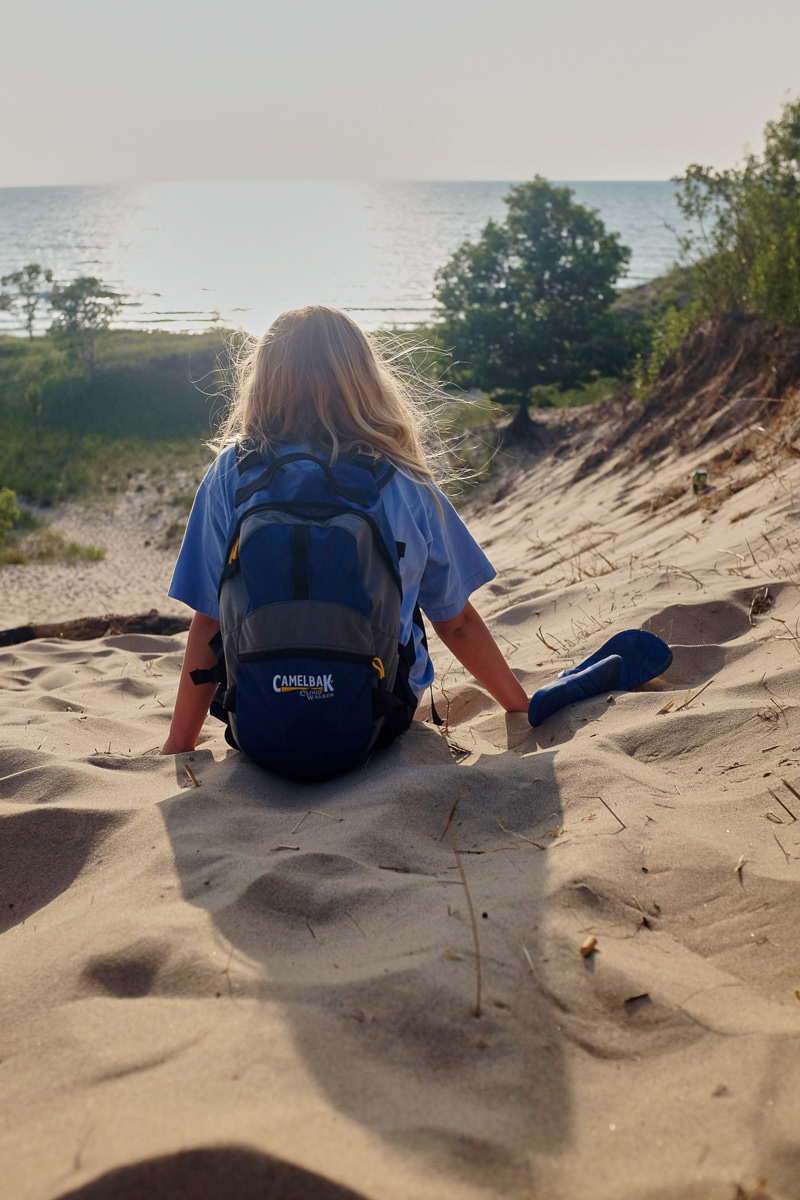 We ran down that dune and followed the trail through the tiny yellow flowers in the dune grasses through one final bowl where we found more clothing, just as we have every other time on this trail. 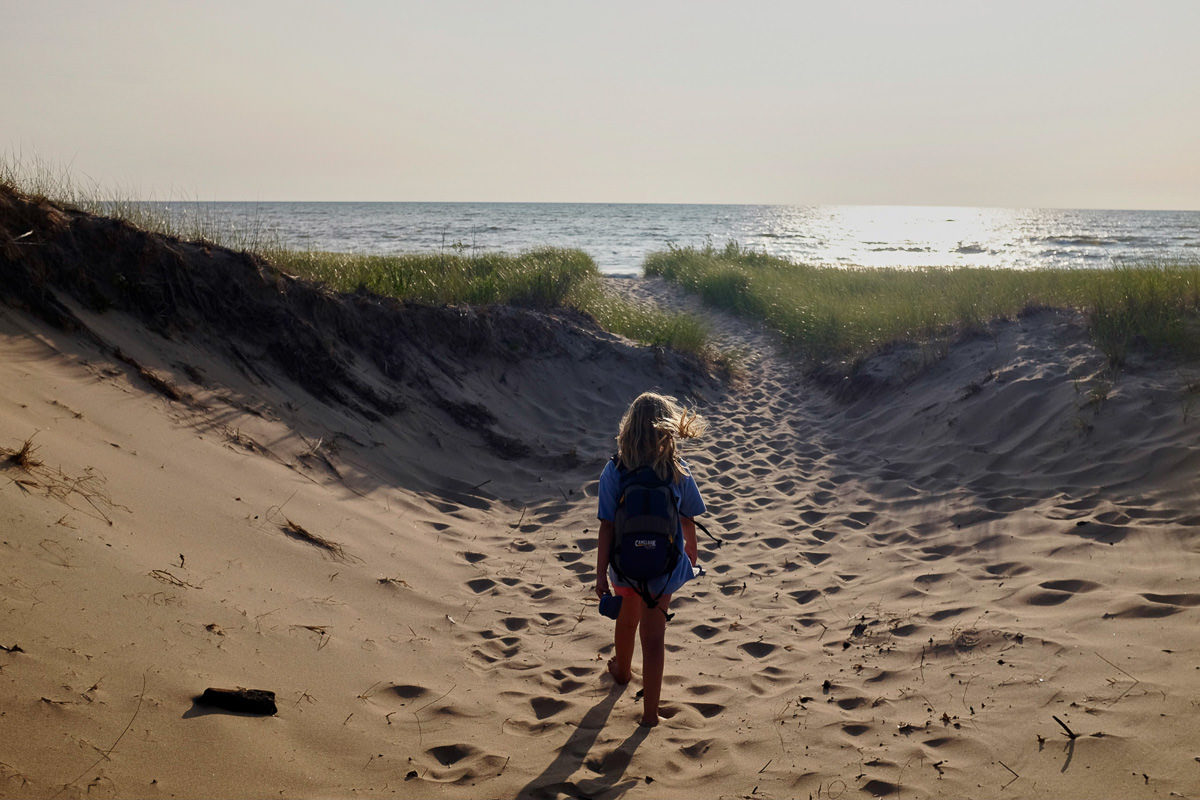 One pair of socks to the left, and another to the right: 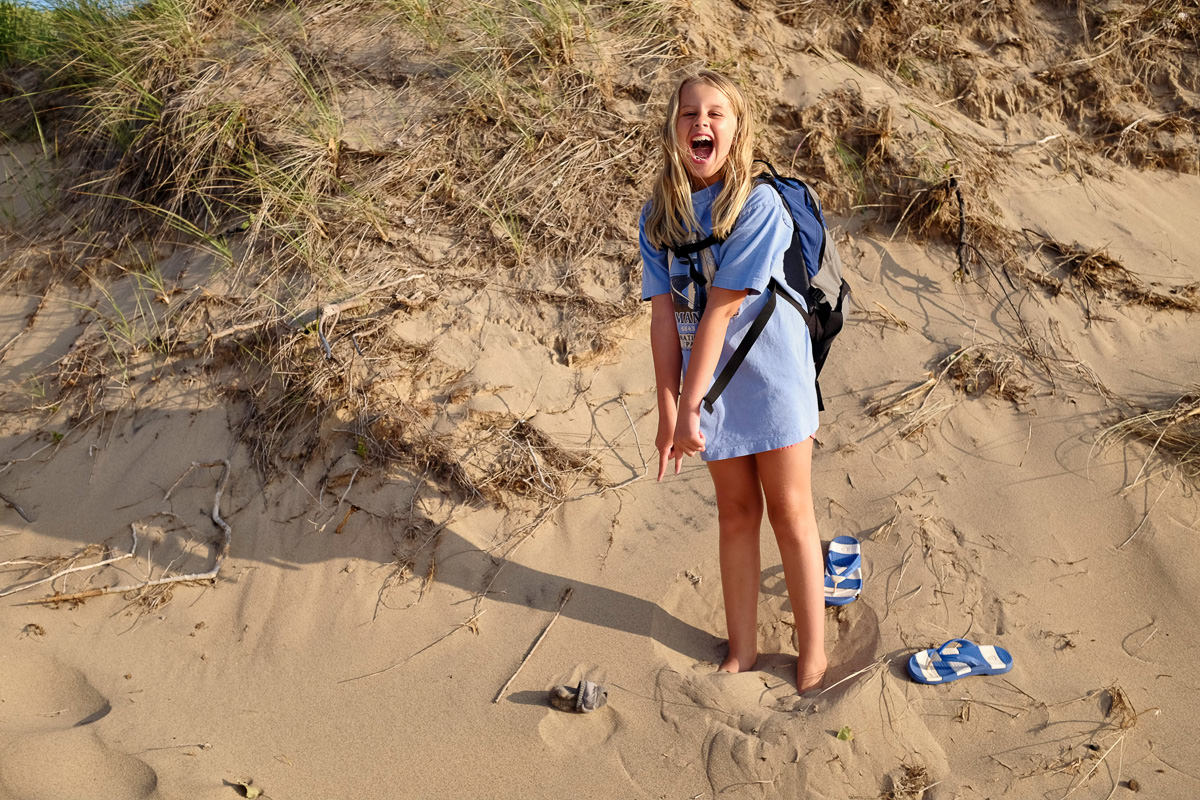 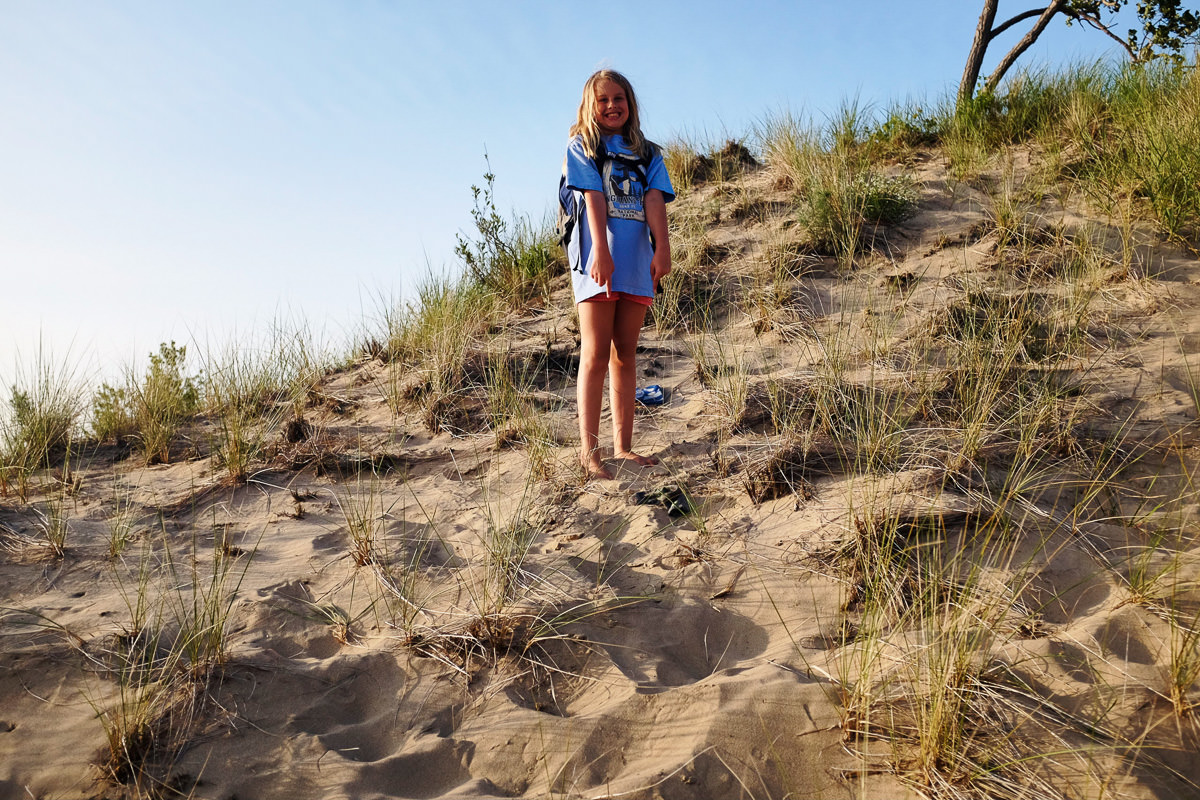 At this point, we arrived at the beach. Well, sort of, since there’s almost no beach these days. There was very little beach when we were here on Sunday, after two years of cold winters brought lake levels back up. Combine that with the 35mph wind, and there was almost nothing to walk on, but we made our way south past the main Beach Trail area in search of some shelter from the wind. There wasn’t any, so we just picked a spot fairly close to where we had been on Sunday, and took the requisite selfie. 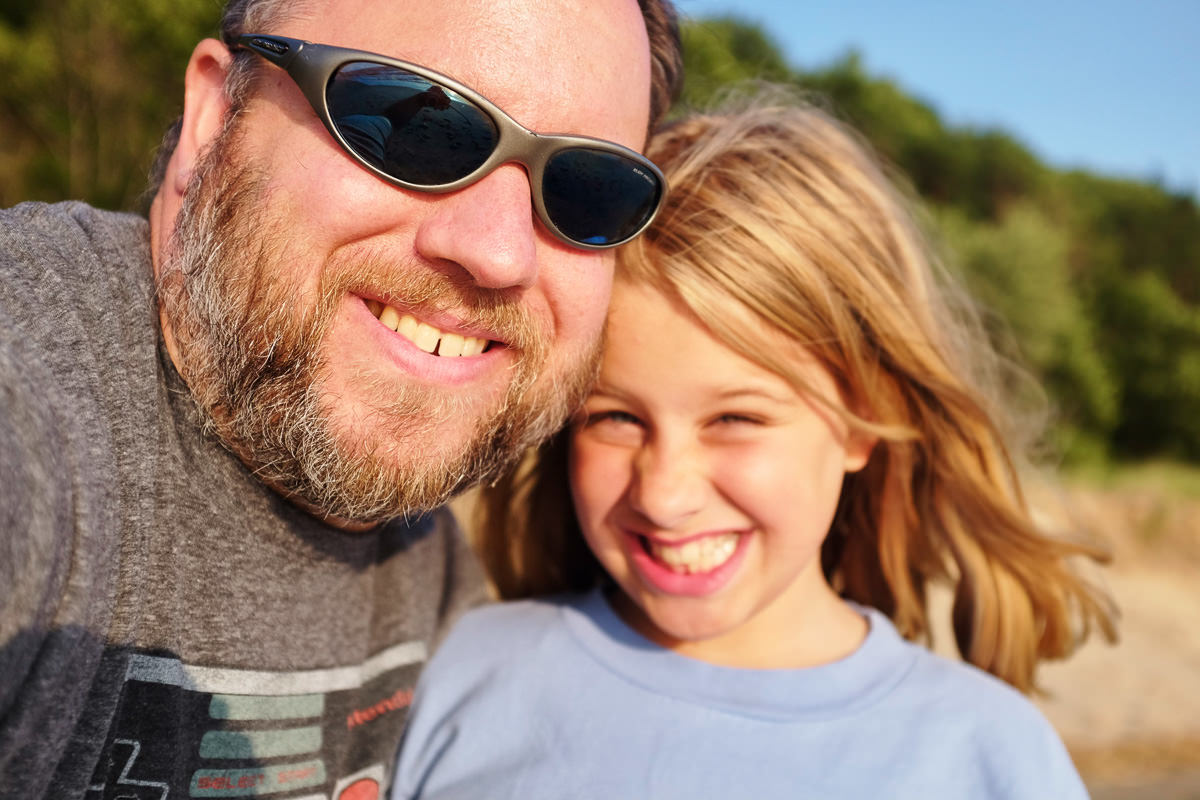 Aly quickly peeled off her shirt and shorts and jumped into the waves, after my warning about riptides, large waves, and instructions to only go waist-deep in the water. I grabbed my Fuji and waded in to mid-thigh depth to shoot images of the playful blonde getting knocked around by waves and loving it. 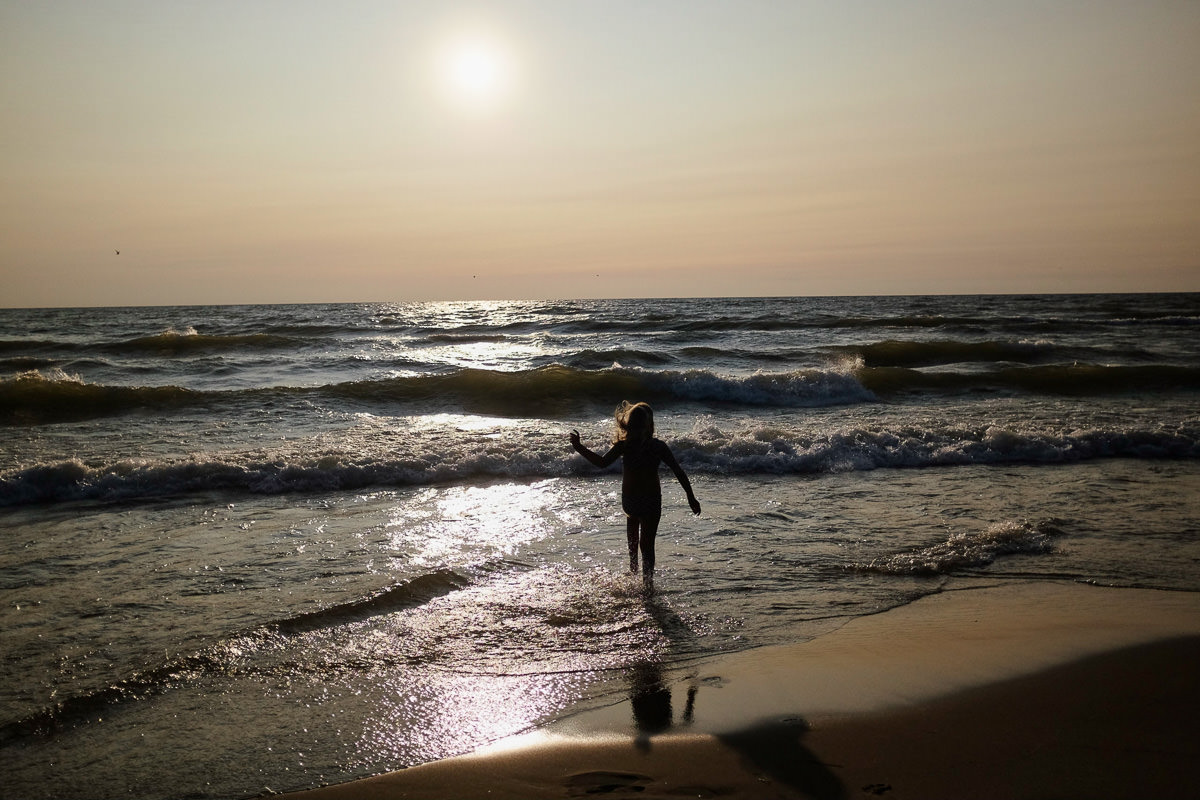 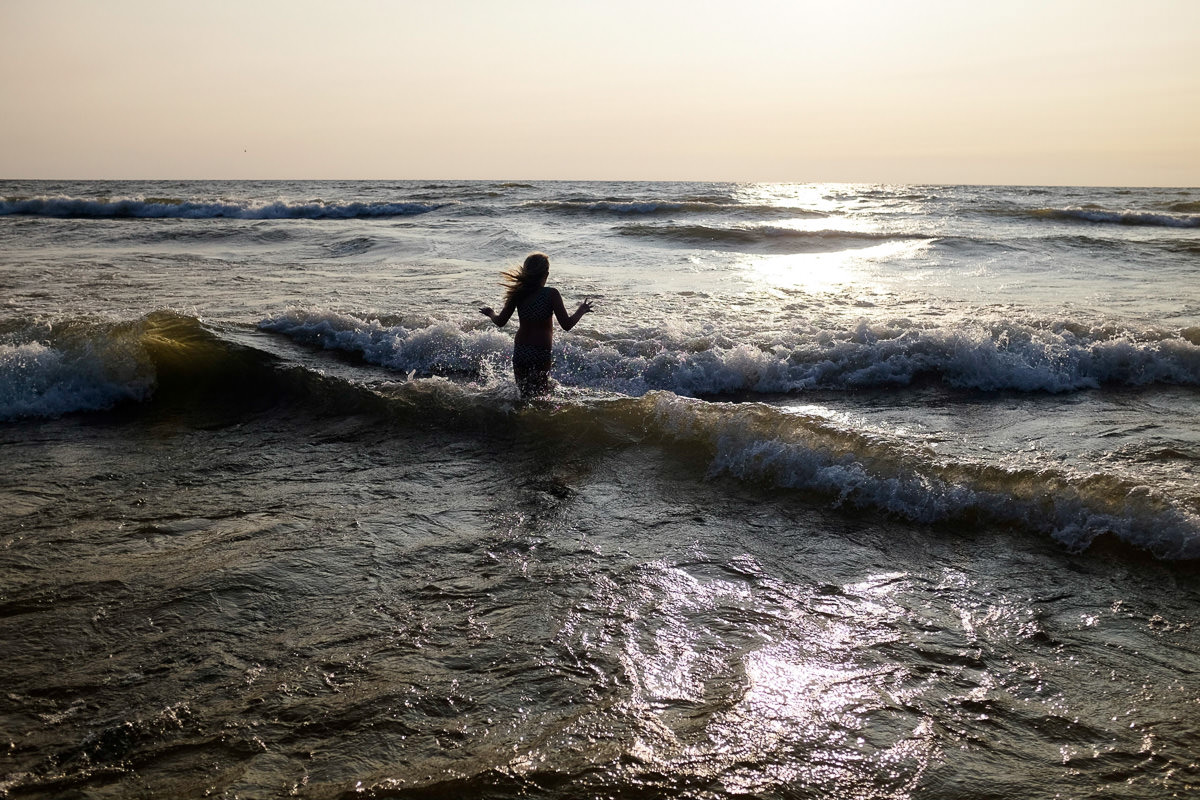 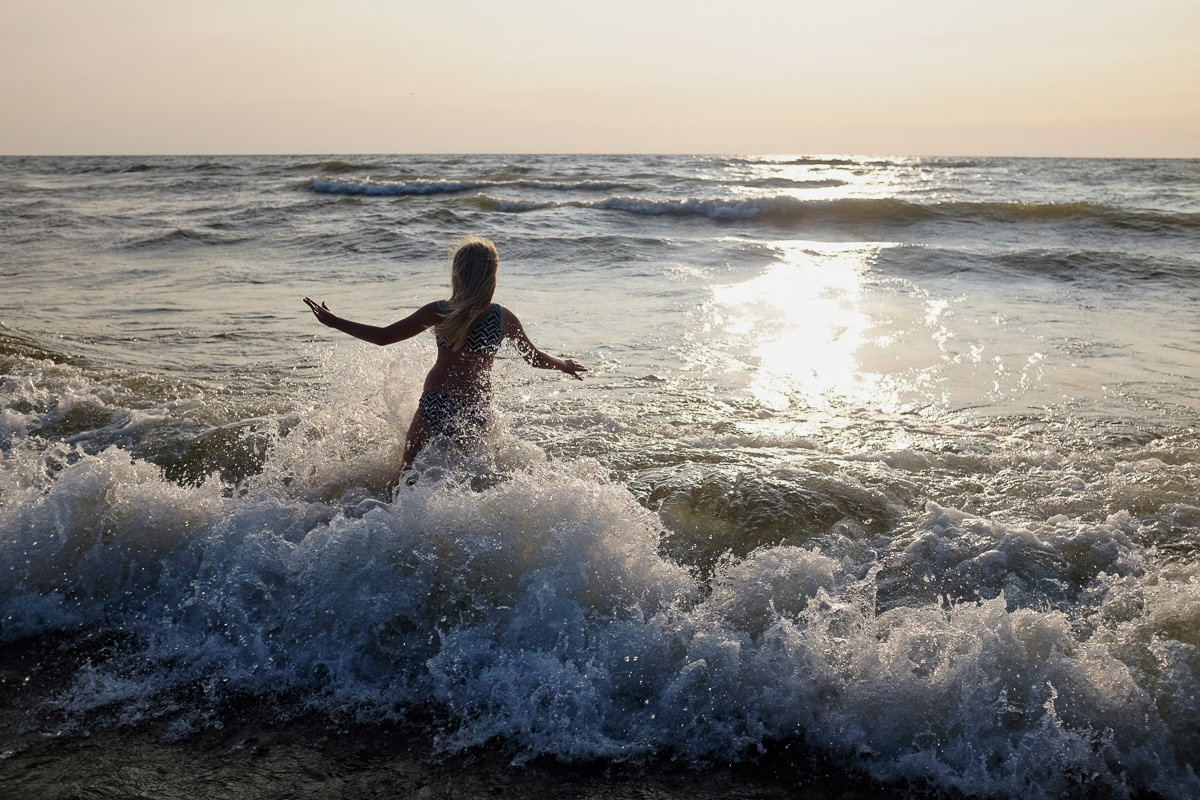 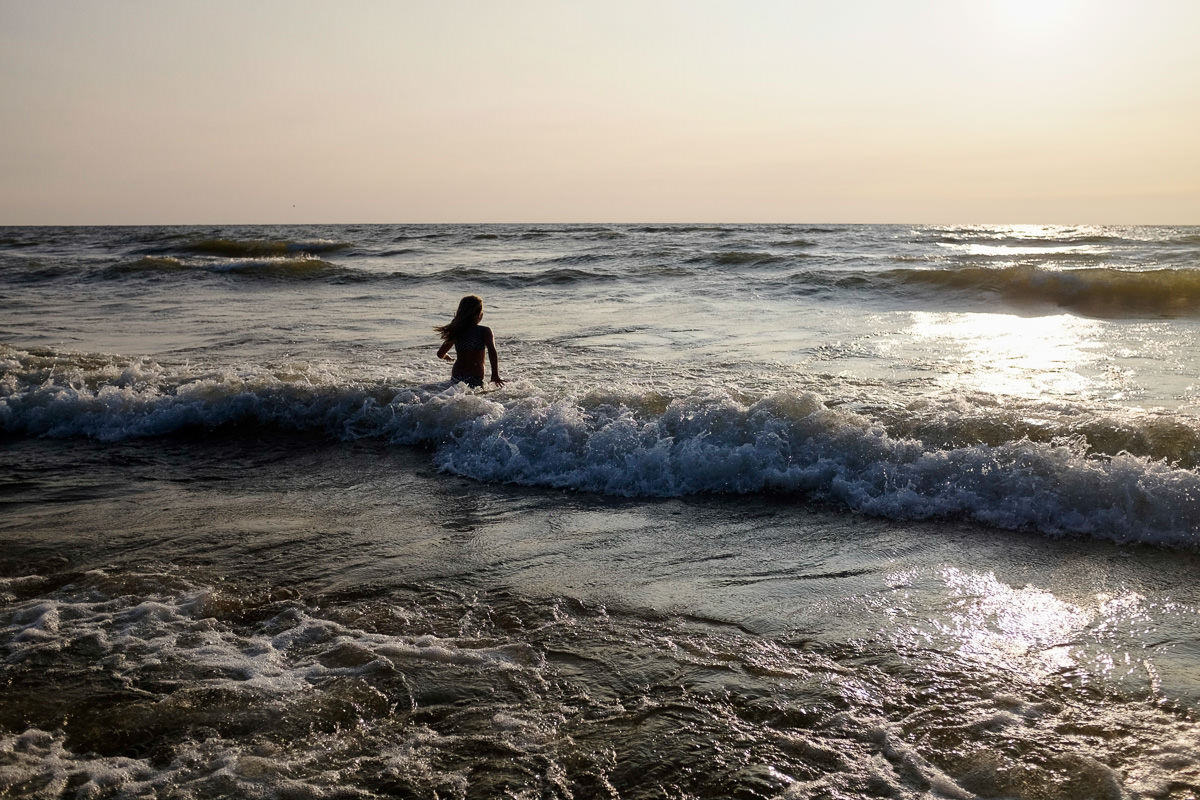 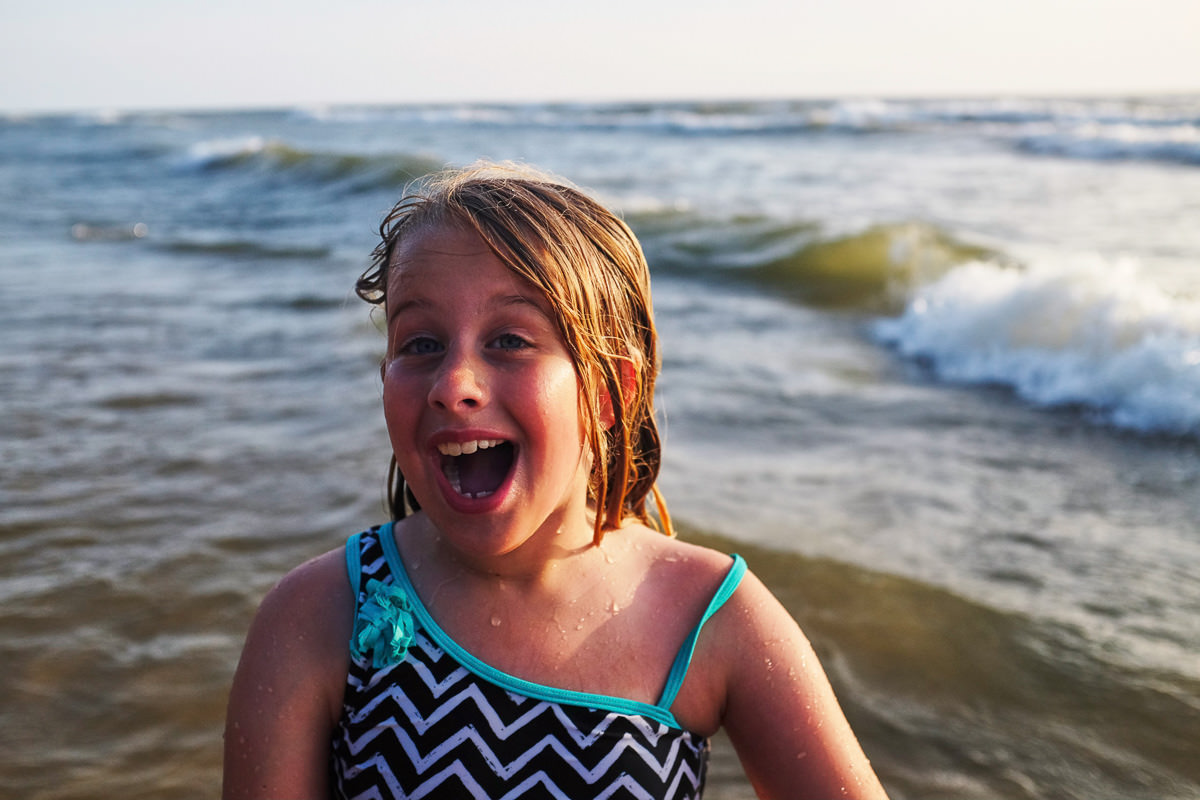 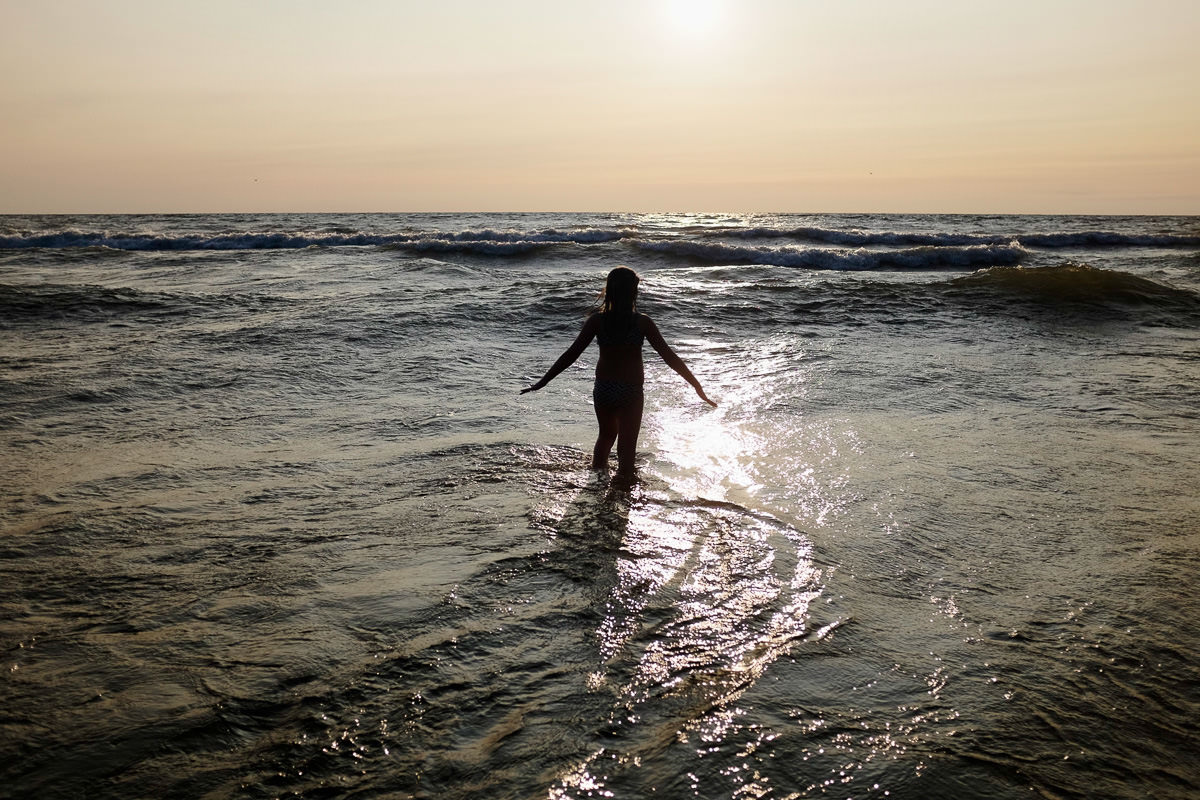 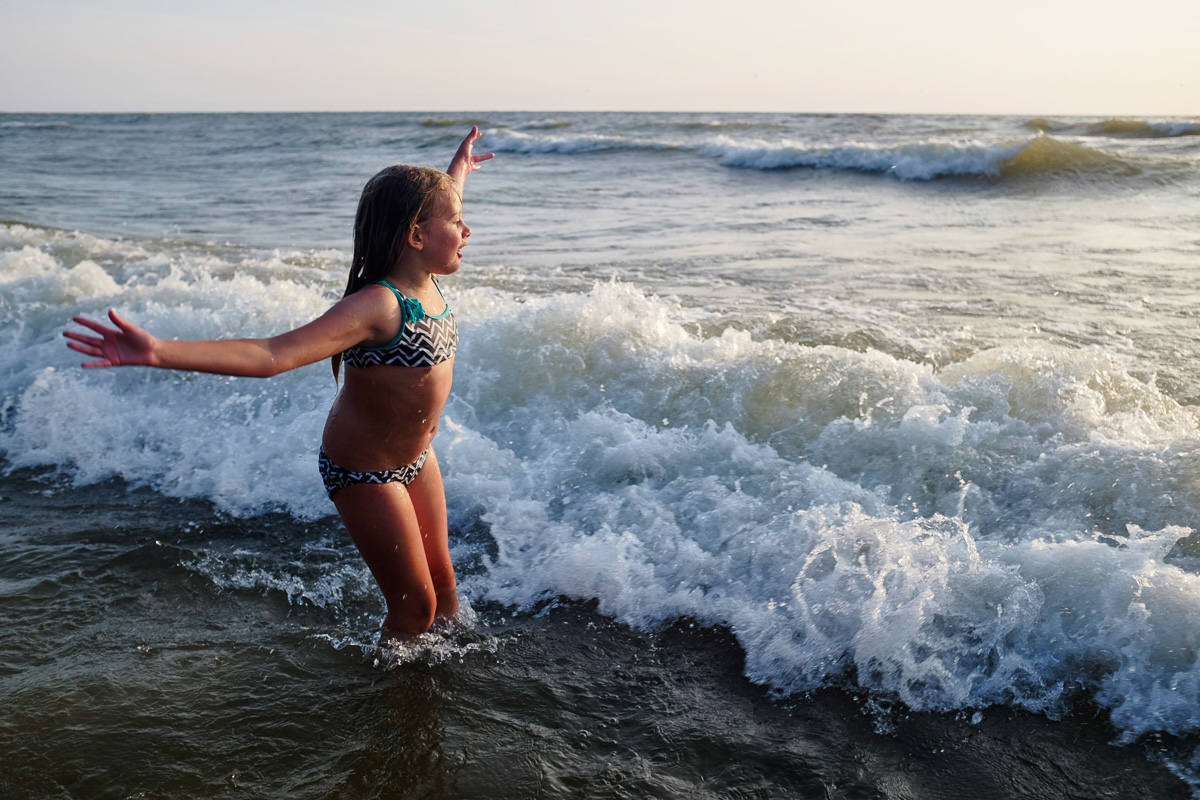 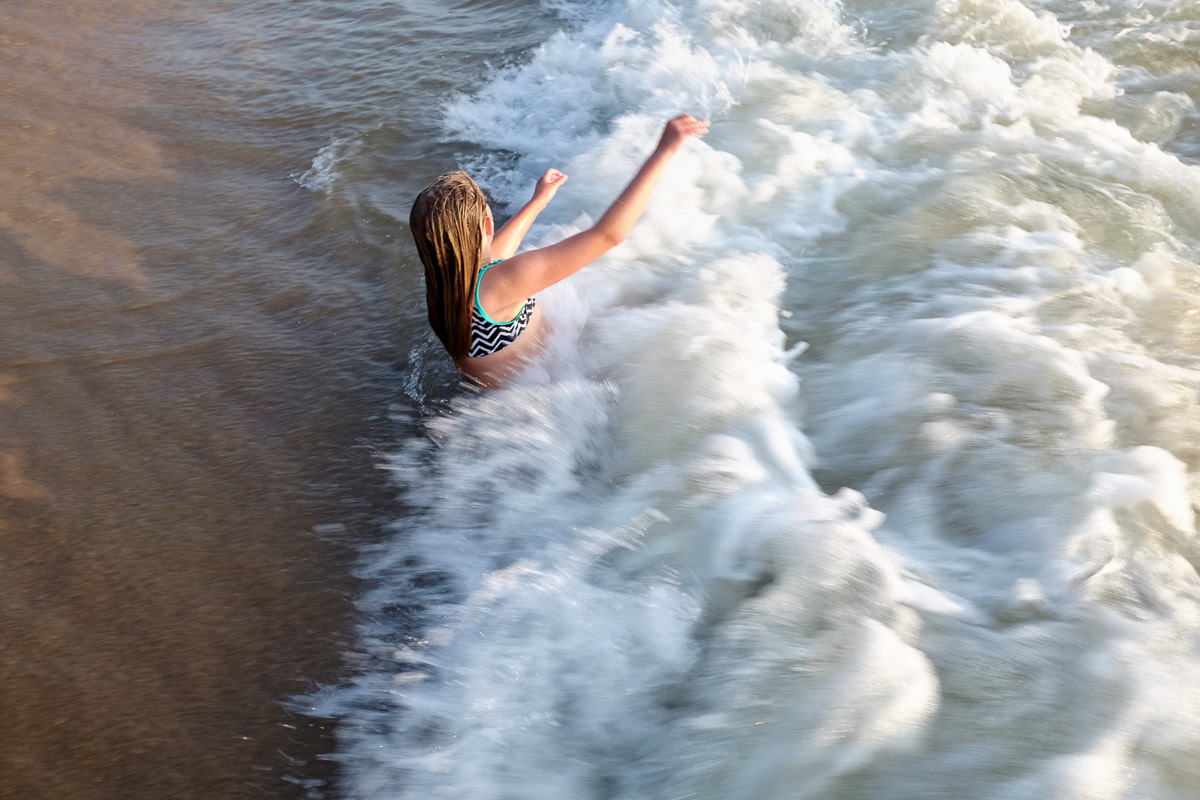 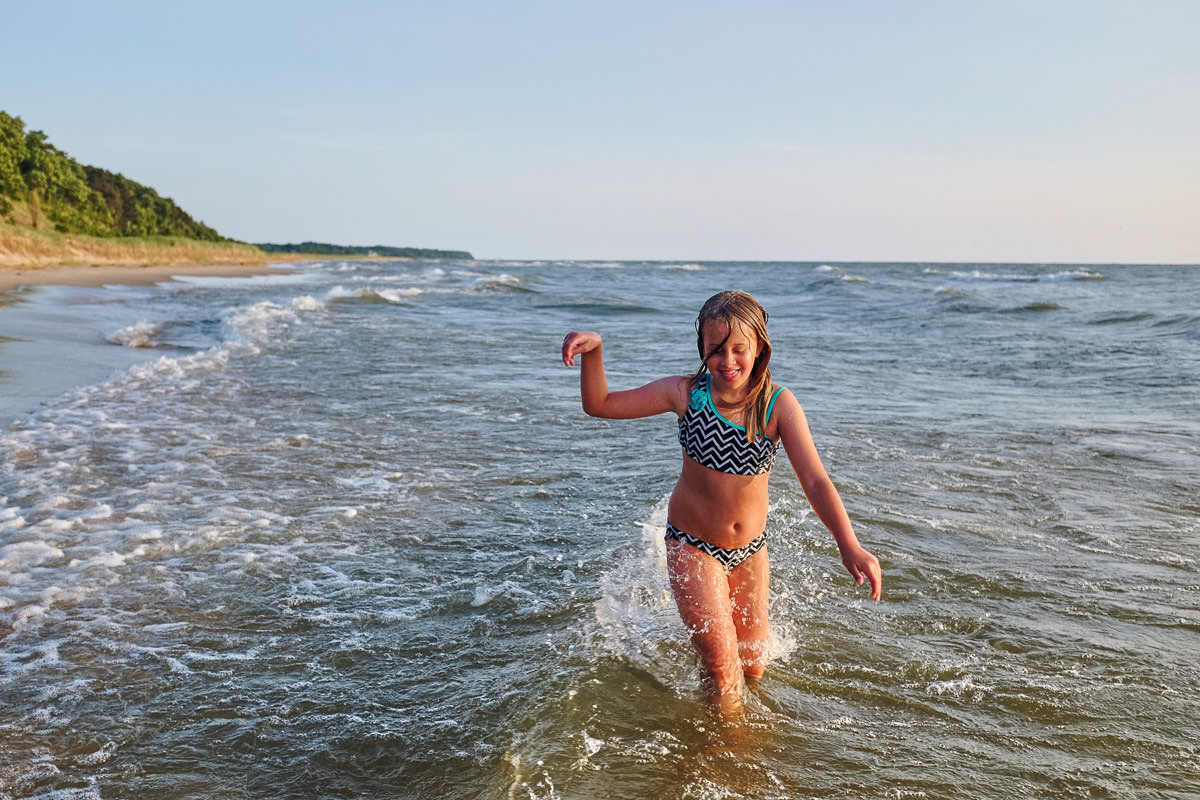 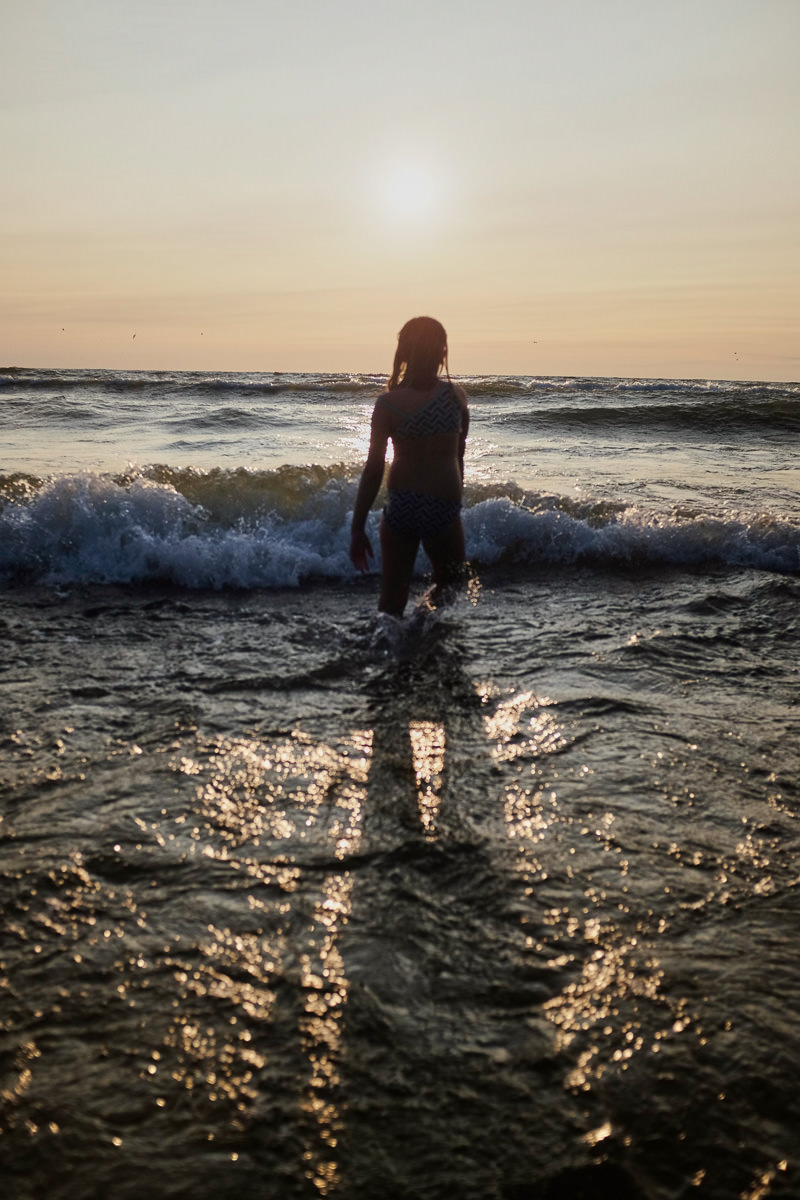 After about an hour of this, I called Aly out of the water, because I could see she was tiring from the cold water combined with the wind and waves, which of course was met with “awwww, Daadddddd!”. But she didn’t fight me much, so I know she was getting tired. We pulled on our sweatshirts and I wrapped her in my dry towel, then we headed back over to the edge of Beach Trail to find a bench and some relief from the wind. 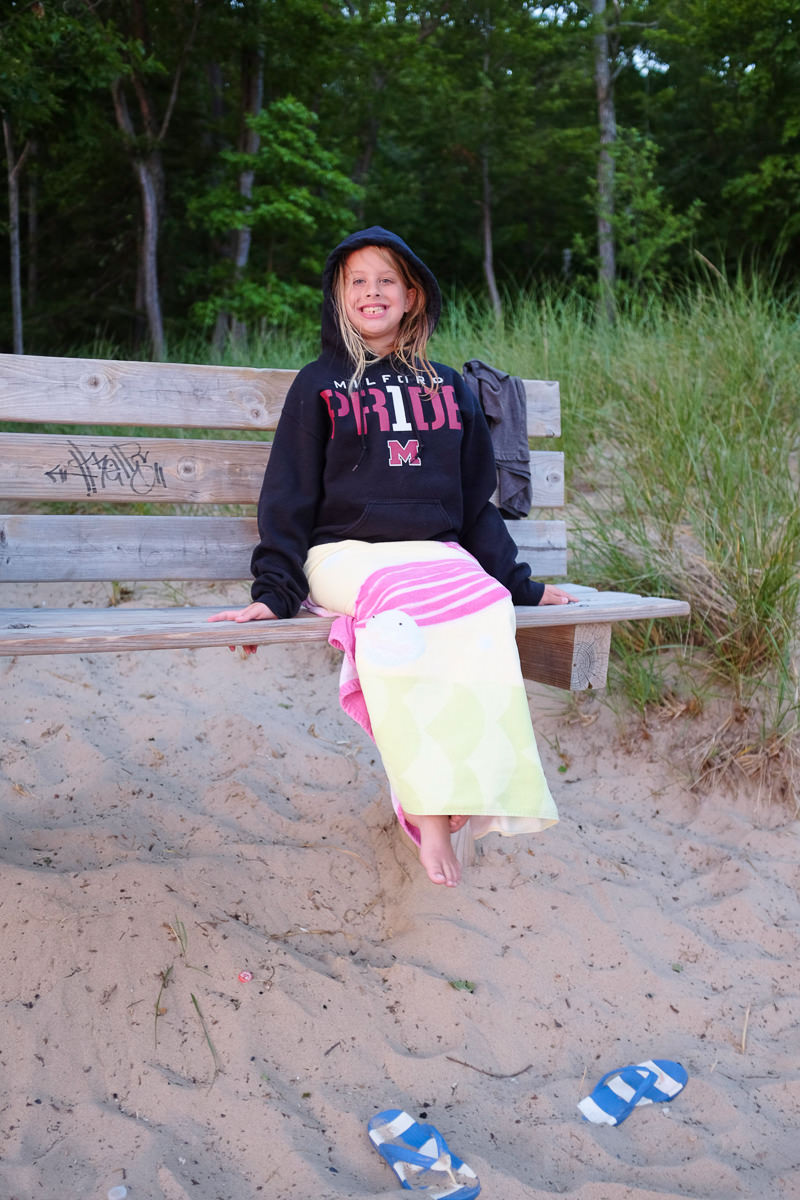 We watched the sunset while playing guessing games – Aly’s new game was “I’m thinking of something” and I was only allowed to guess – no yes/no questions like when playing twenty questions. It took me forever to get hers (“that tree right there”, “waves”), while she seemed to guess mine after only a single clue (“Michigan Stadium”, “the sun”). It was a fun way to pass the time while the orange and pink sky reached out to us. 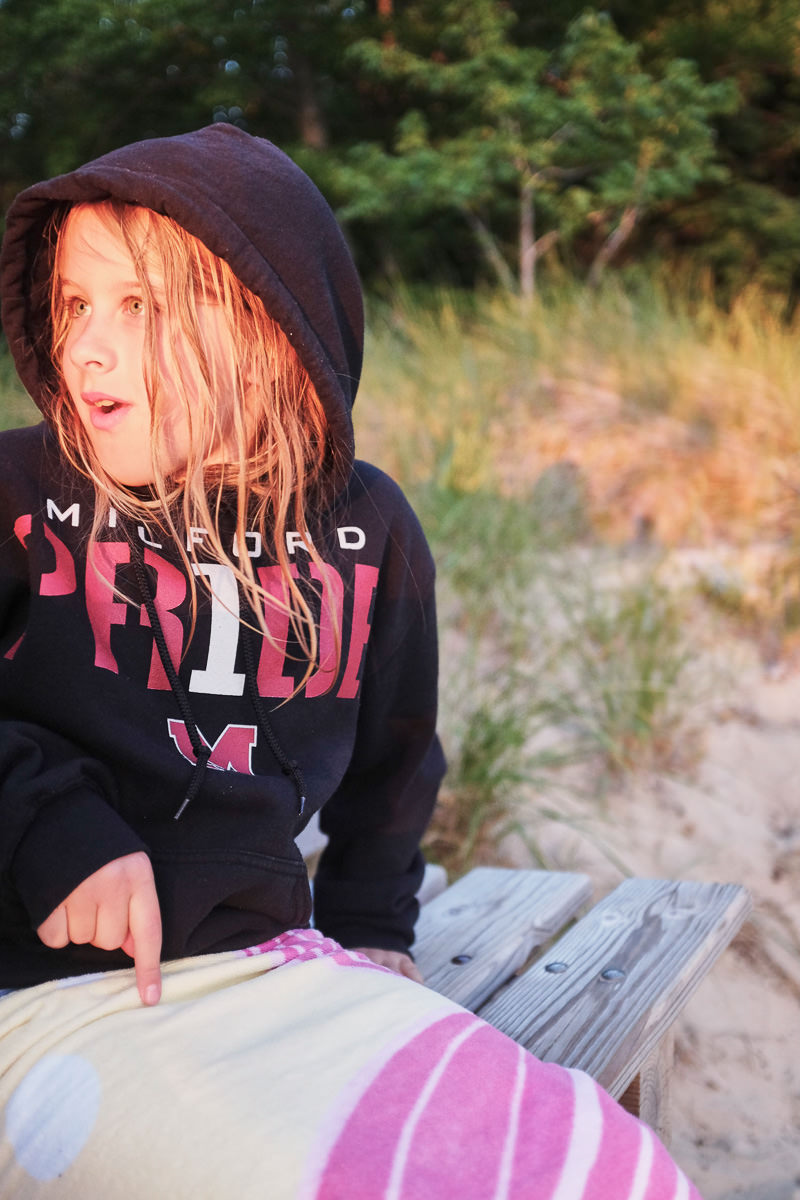 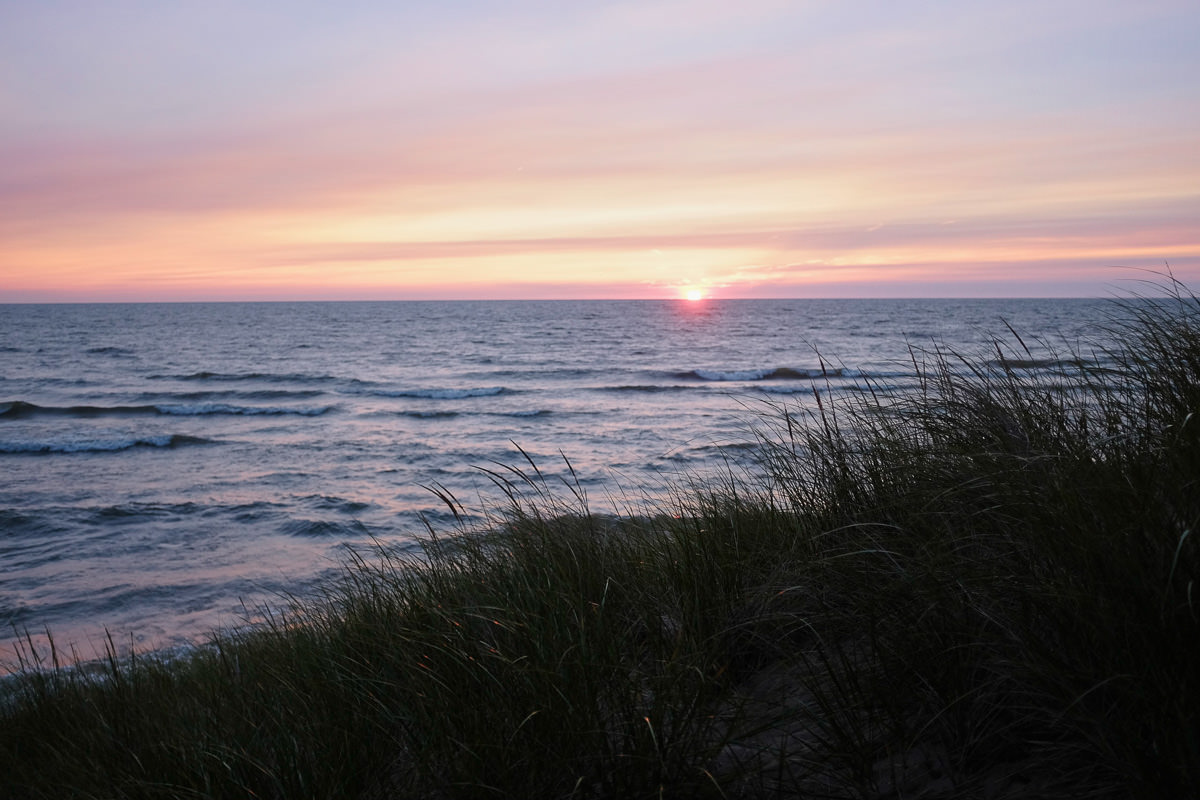 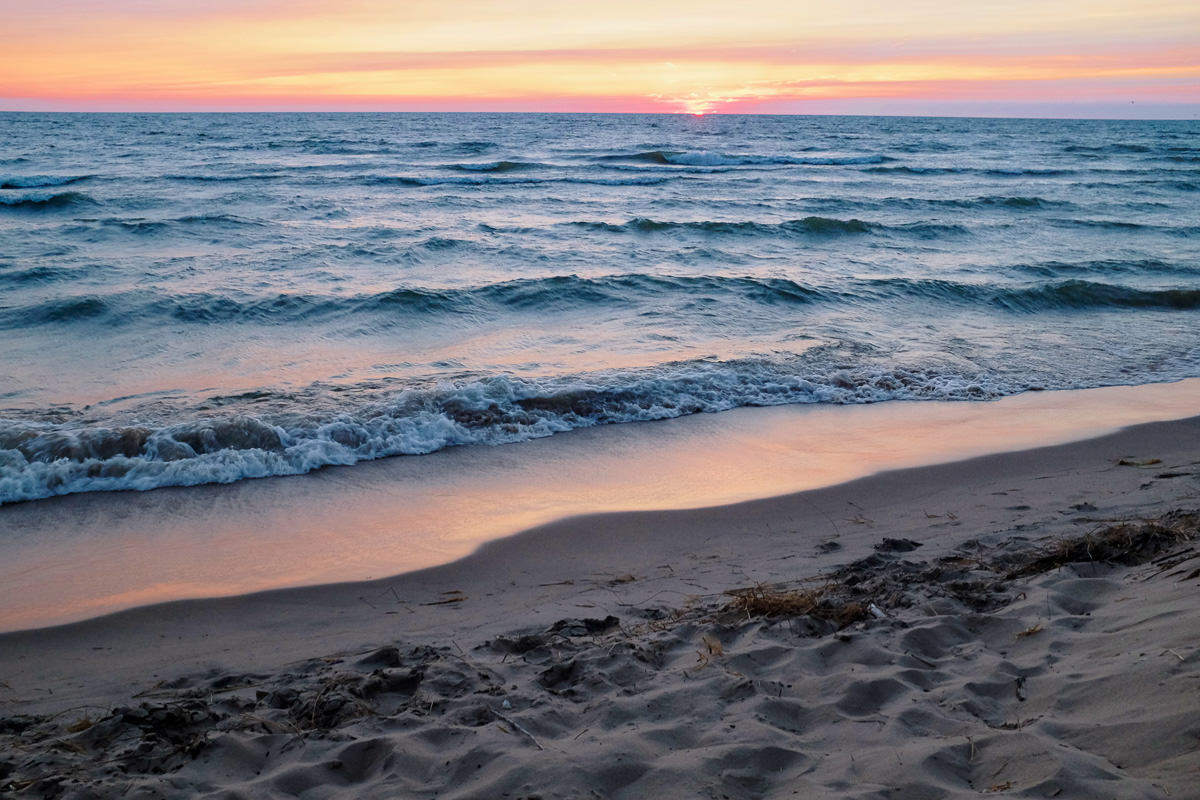 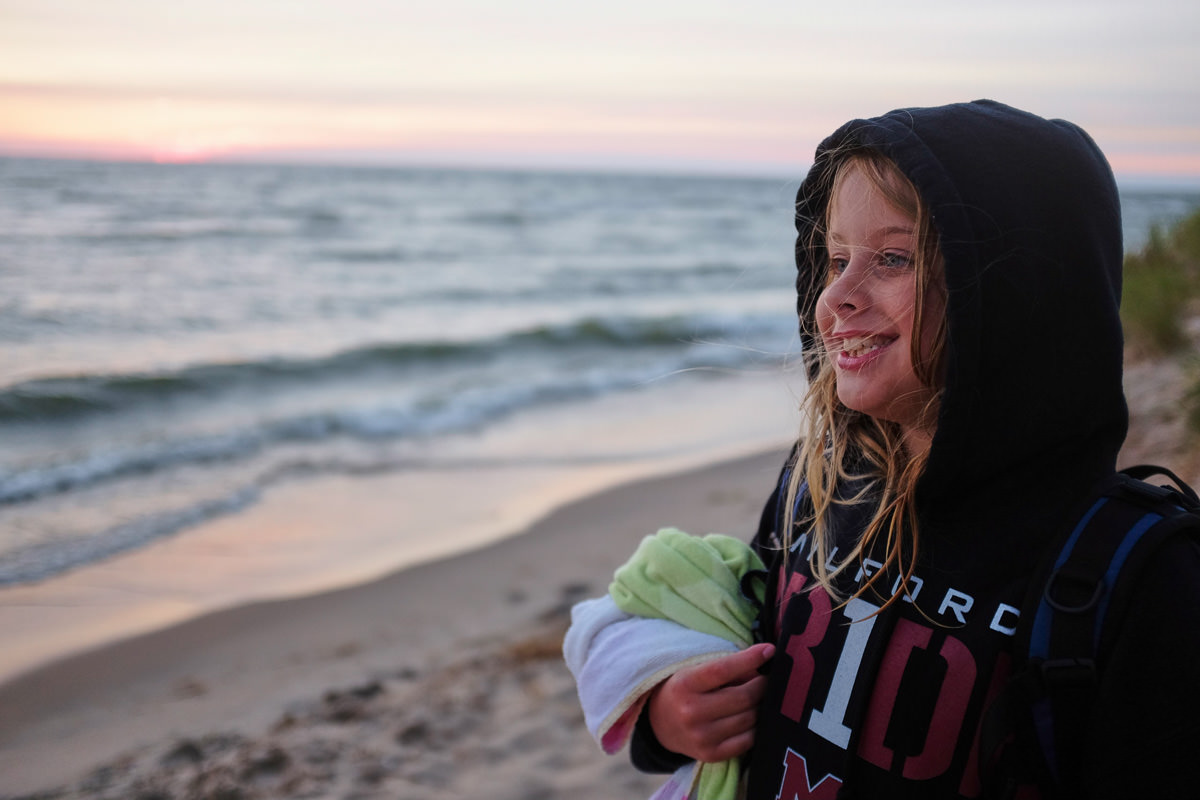 Once the sun had been set for some time, I convinced her that it was finally dark enough for our walk back, since it was nearing 10pm. Beach Trail is significantly darker than the beach, due to the tree canopy overhead. I let Aly wear my headlamp, which helped comfort her nerves a bit since we were hiking in darkness, though at first she was seeing yellow eyes everywhere she looked off trail.  About ten minutes later, she correctly spotted another few deer just off to our left and kept her headlamp pointed at them. This, predictably, led them to stare back at the light with their glowing yellow eyes, which, predictably, led her to say “their eyes are kind of freaking me out.” Classic.

She spent the ride home unsuccessfully lobbying me to stop at McDonald’s for a late-night snack, though my confident exterior belied a near-crack underneath. We got home and told Rachel all about our night then we all headed to bed for the night.