It was a dark and stormy night…..

No, seriously, it was. My dad worked for Manufacturers Bank and then Comerica in a role where he sold banking services to other smaller banks across Michigan. Each June, all the bankers in Michigan gathered at the Grand Hotel for the two-day Michigan Banker’s Association convention, and my dad was usually responsible for handling Manufacturers presentation at the show. This included booths between sessions, and hosting hospitality suites (yes, there were lots of red-cheeked couples whenever I was allowed to sneak in) at night for things like magicians and handwriting analysts or other crazy entertainment.

I spent most of my time wandering the island or golfing, as well as frequenting the island arcades. The Grand Hotel is just not that interesting a place for a young boy.

The final morning always had a keynote speaker in general session before everybody left the island to return to real life. This was always a fairly big name in Michigan circles, people like John Engler – when I met him, I told him “Thanks for taking away funding for sports and theater at my school” at 15 years old (my brother ended up working for him a few years back). This year’s guest was Bo Schembechler. And if you know anything about me, you know I’ve been a Michigan fan all my life, and that made this by far the most interesting keynote. You can say I’m a Bo fan: 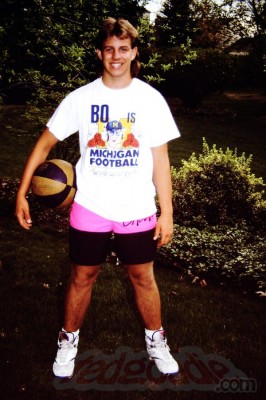 If you’ve ever had dinner at the Grand Hotel, you know it’s a big deal. Coat and tie, several courses, a whole big fancy shebang. Again, not very interesting to a teenager, especially one who had done it before. So on this particular night, the last night of the convention, I skipped the fancy dinner and was hanging out in the hotel lobby being awkward or something, with the place pretty much to myself, since the weather prevented anyone on the island from wandering in and anyone in the hotel was at dinner.

Until old Bo wandered in. I shoved the awkwardness aside and walked right up to him with the brash confidence of a teenager (funny things, aren’t they?), introduced myself as a huge Michigan fan, and started immediately telling him about my favorite players and games I’d attended. Instead of checking in and getting settled in his room for the night, Bo sat down with me and we talked in that lobby for about an hour until just before dinner let out. I plucked my parents out from the streaming crowd and told them my story about meeting and talking to Bo, which they initially completely disbelieved. By the time I finished, they were convinced it was a tall tale.

Until the next morning, after Bo’s fantastic keynote, when we waited as a family to meet him. When our turn came, he greeted us with a loud and enthusiastic “Teeeeeed! How’s my new friend?” and my parents just about died. 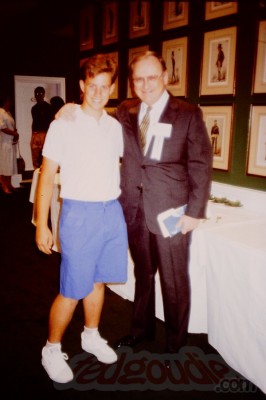