I hit the road well before sunrise, on my way to the mountains.

By the time I reached Blue Ridge Parkway, it had been raining for quite some time, and the road was wrapped in a thick fog. 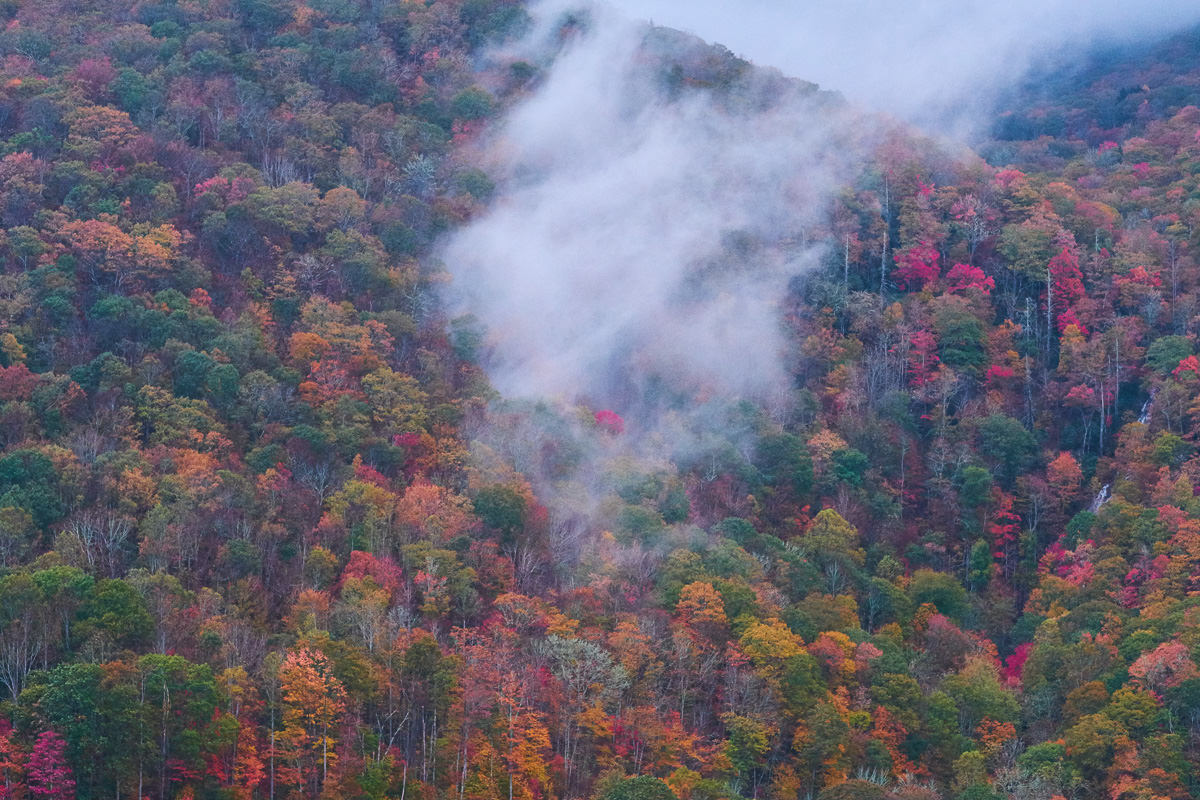 I took a side road called Balsam Mountain Road for the first time, with the intention of then following the “unimproved” Heintooga Ridge Road two-track 18 miles through the woods down to Great Smoky Mountains Park, but I decided it was too wet and too big a risk to take since I was alone. 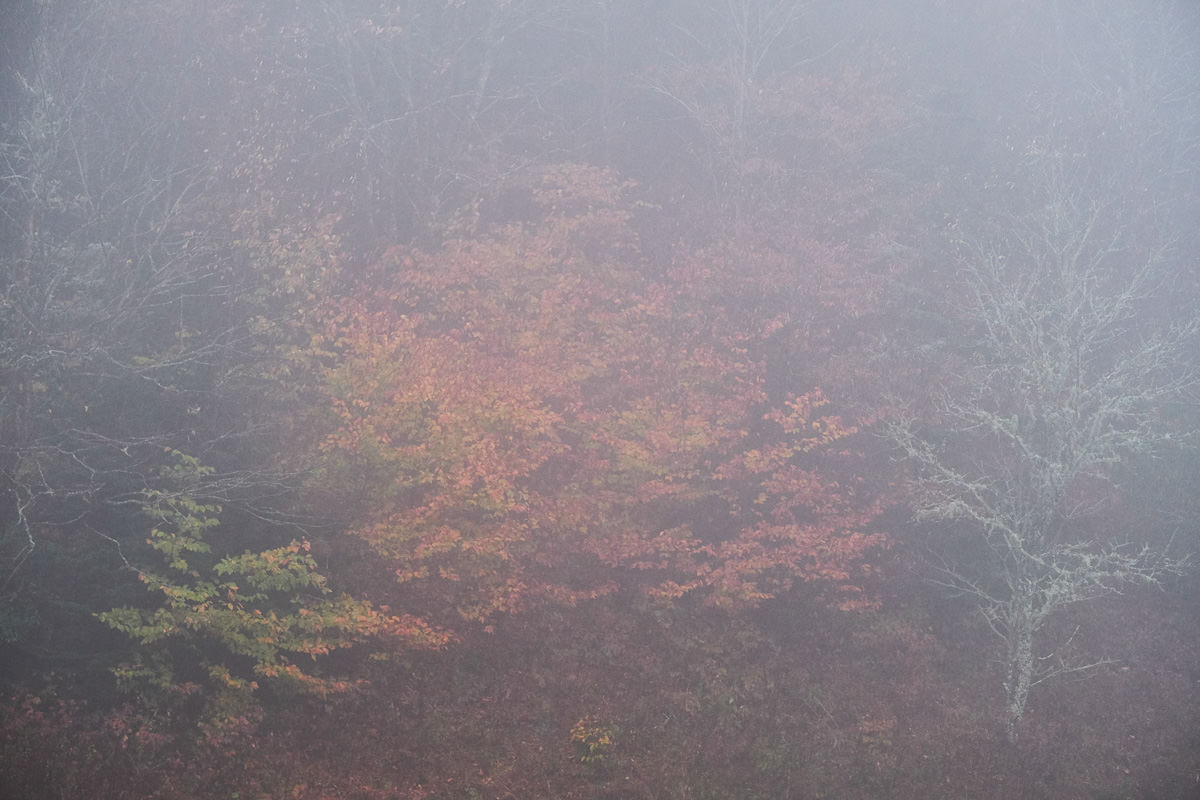 I backtracked to the parkway, and entered the south end of GSMNP to see the elk herd resting in the grass next to the visitor center. I grabbed a quick shot from the window before continuing up towards Newfound Gap. 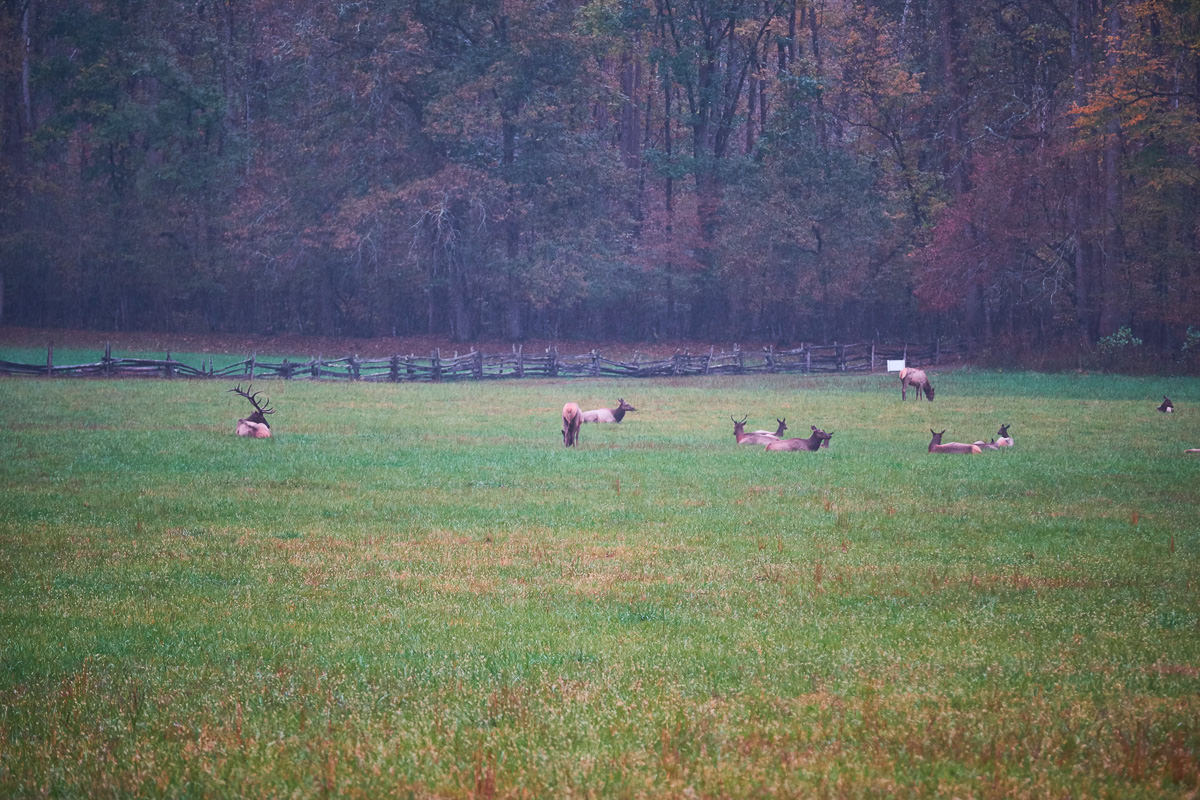 One of my absolute favorite spots in the park is along this stretch heading up, near mile marker 21. Most people race right past it because it is hard to see, even though it’s right next to the road. On my first trip here in 2014, I stopped at this cascade and shot some of my favorite pictures, and it’s become a regular stopping point ever since. This was the first time I’d been there in pouring rain, which can make for excellent landscape images. 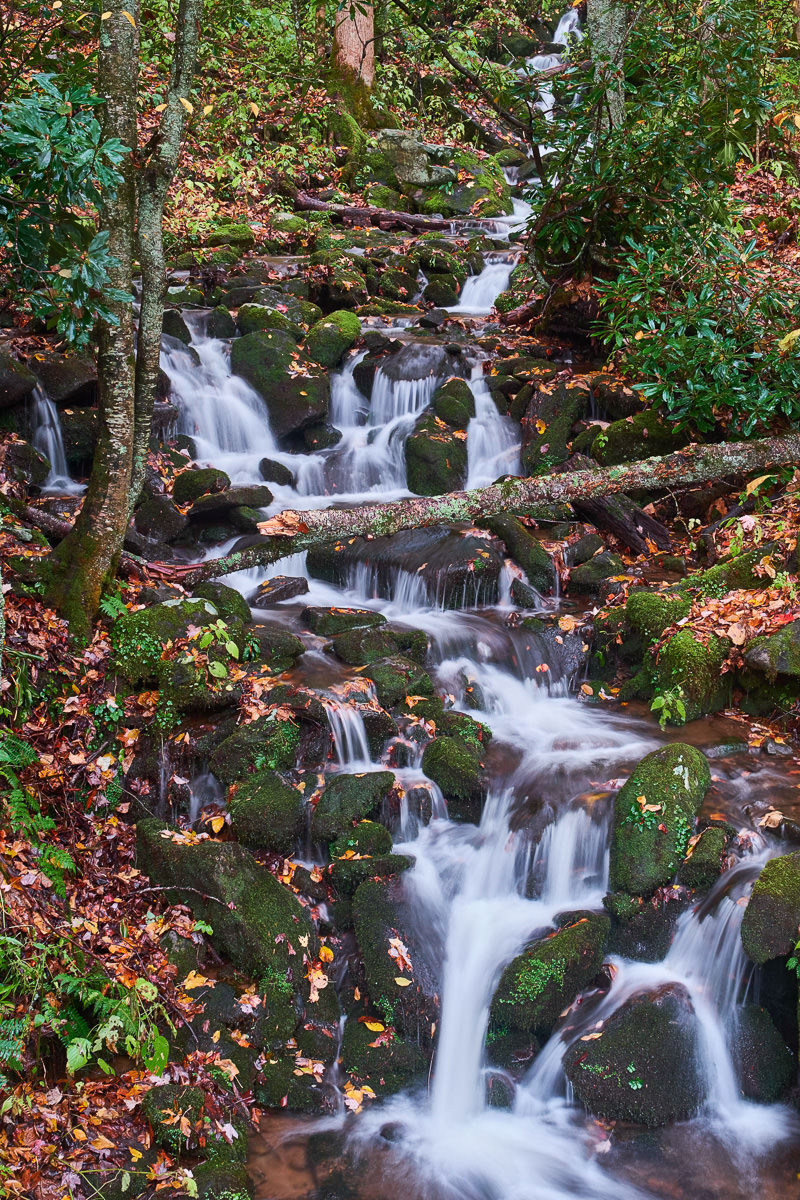 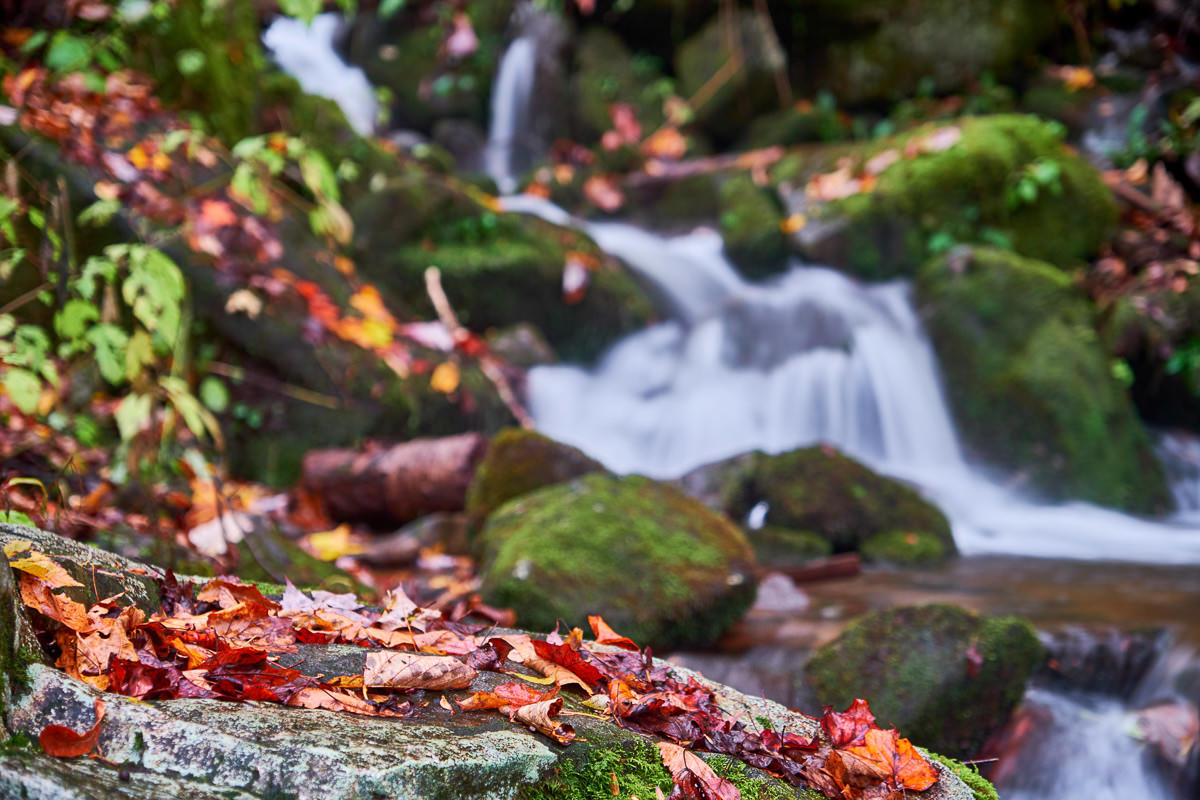 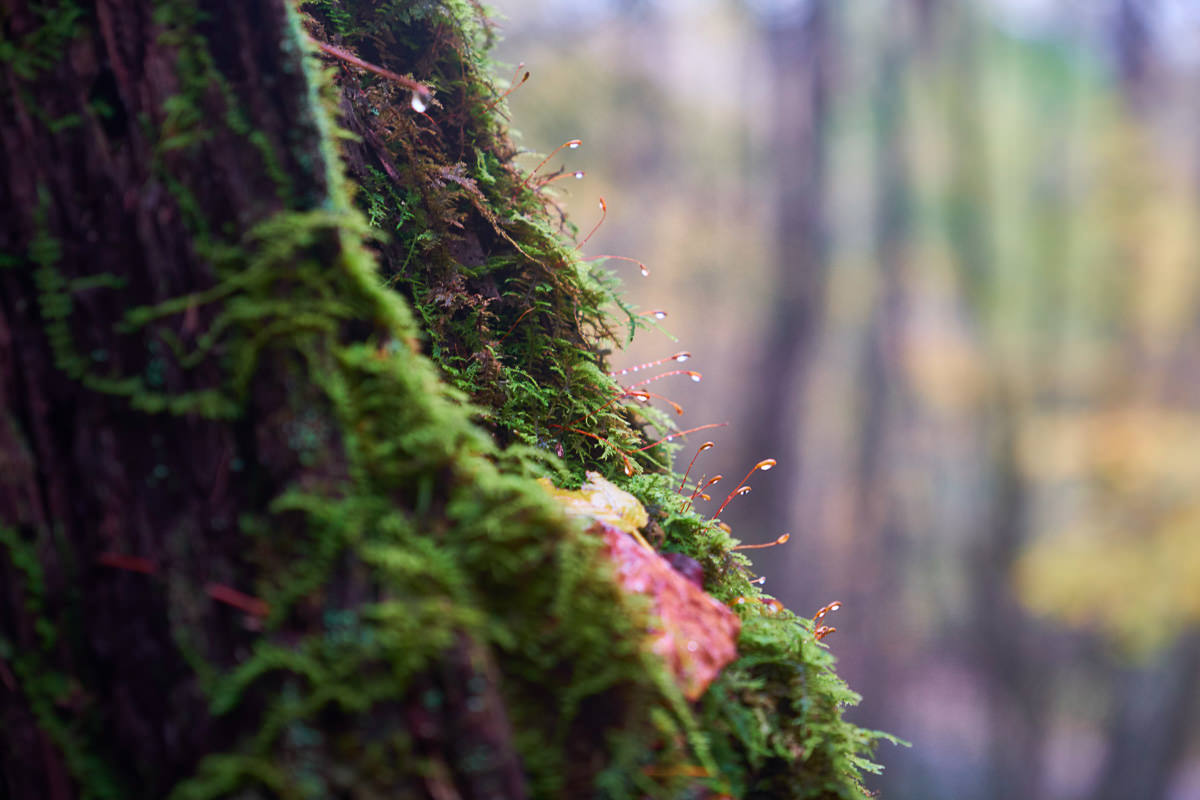 I drove over the top of the park, down the far side, then turned towards Townsend and started looking for my favorite spots to shoot along the Little River, which runs alongside the road. One of those spots along Little River produced some great photos in 2014, but I had not been able to find my way back to the exact spot in the many trips since. Last night, I spent some time on Google maps trying to figure out where it would be, and I stopped at the first likely candidate near Metcalf Bottoms Picnic Area.

It wasn’t the spot, but it was a great spot. 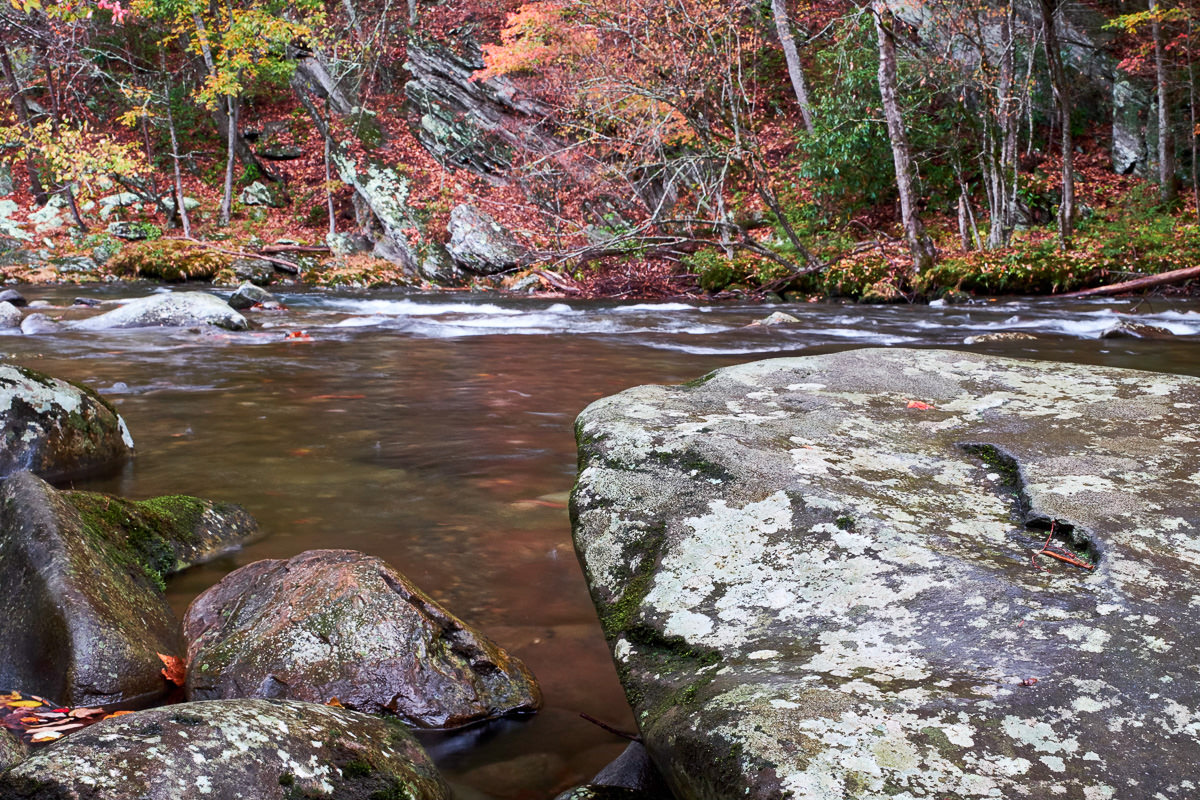 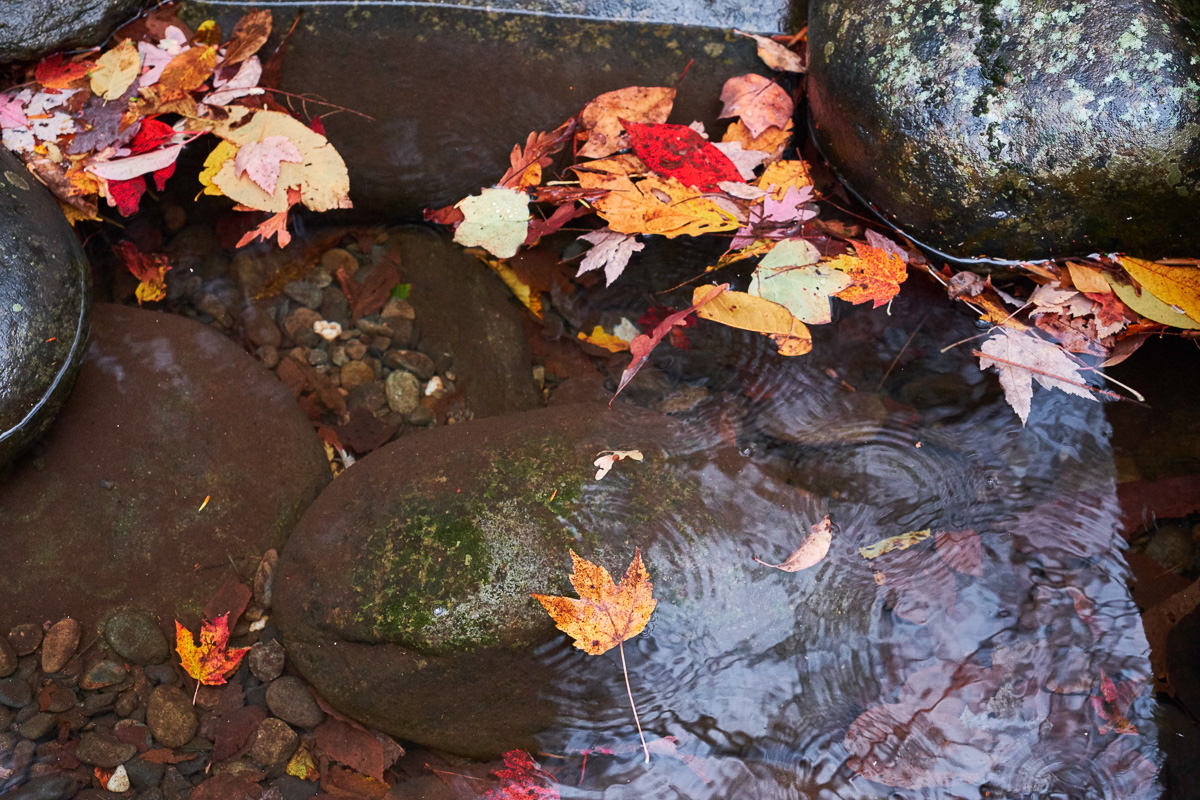 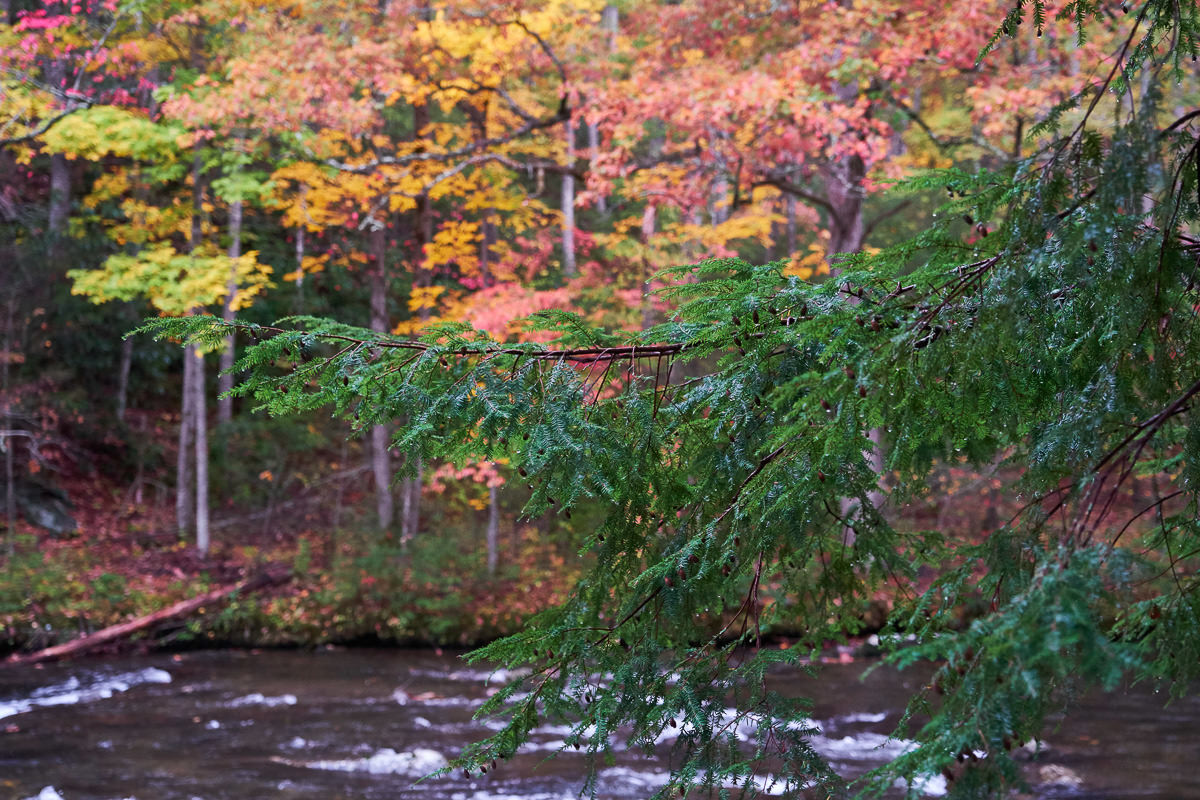 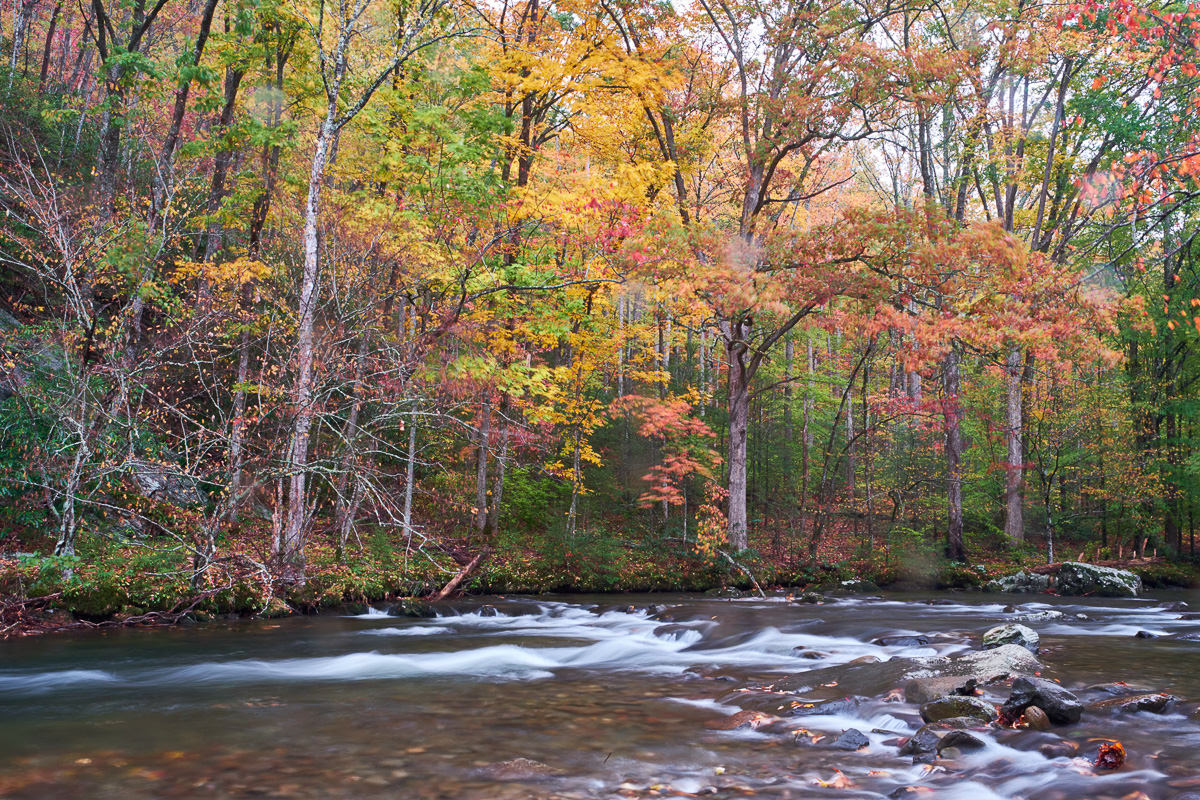 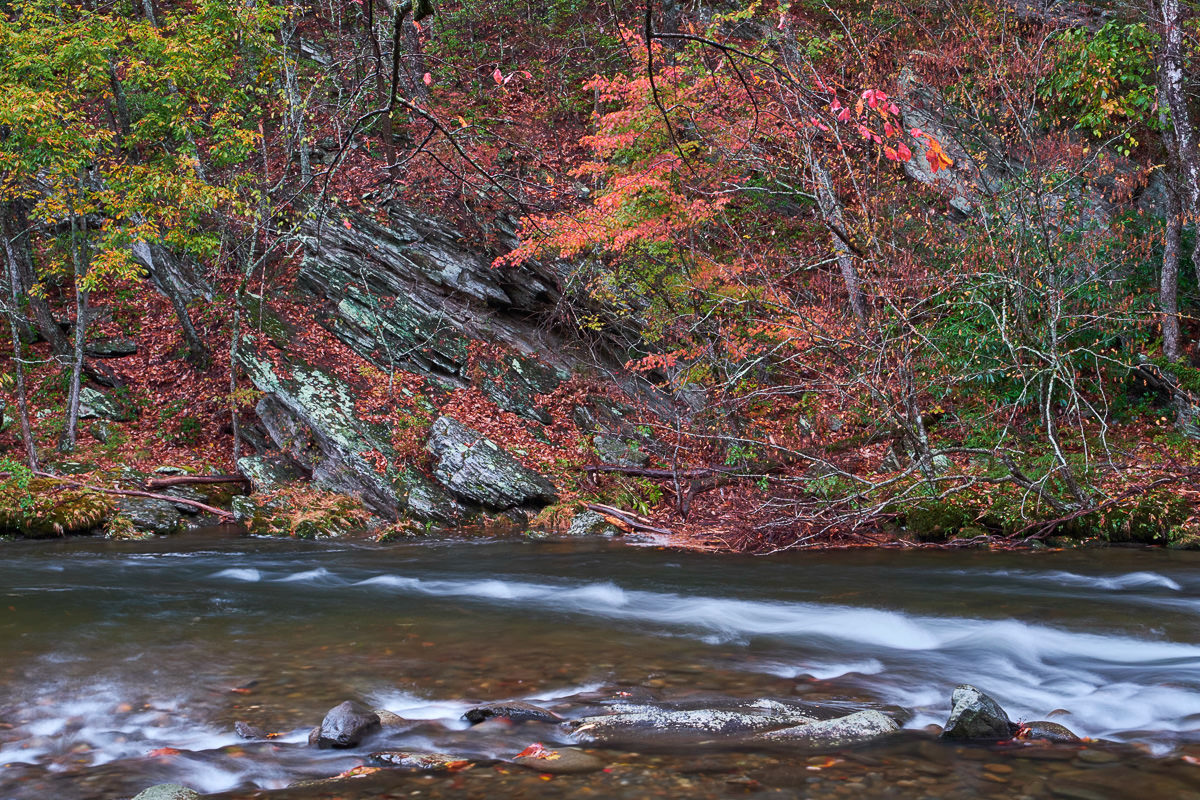 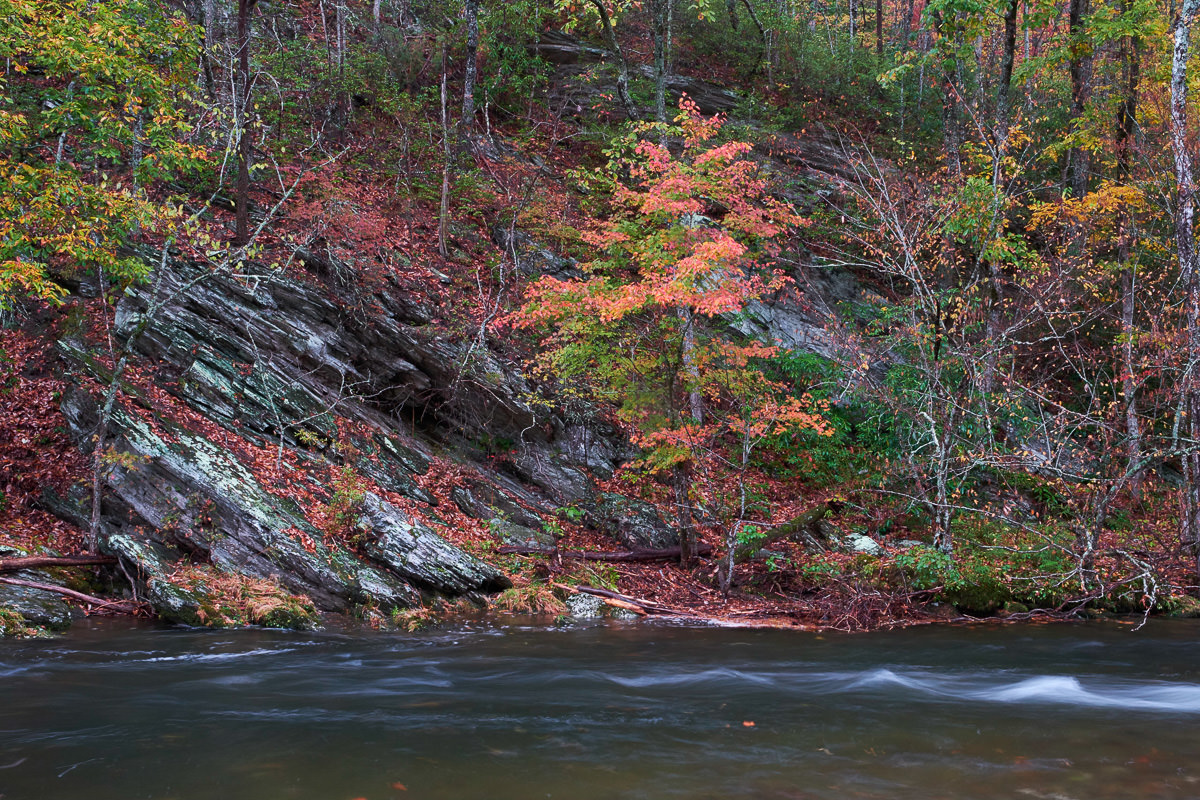 At this point, it was really pouring, and the temperate was in the low to mid 40s, making my hands very cold, but I was happy with what I was getting. I hopped back in the car and moved a bit further along the road, then found the spot I’d been seeking for three and a half years.

This time, I left the camera in the car and got the golf umbrella out to walk down and scout the scene. Predictably, I fell on my ass and sent the umbrella flying, but went down to the river and confirmed that this was the spot I was seeking. 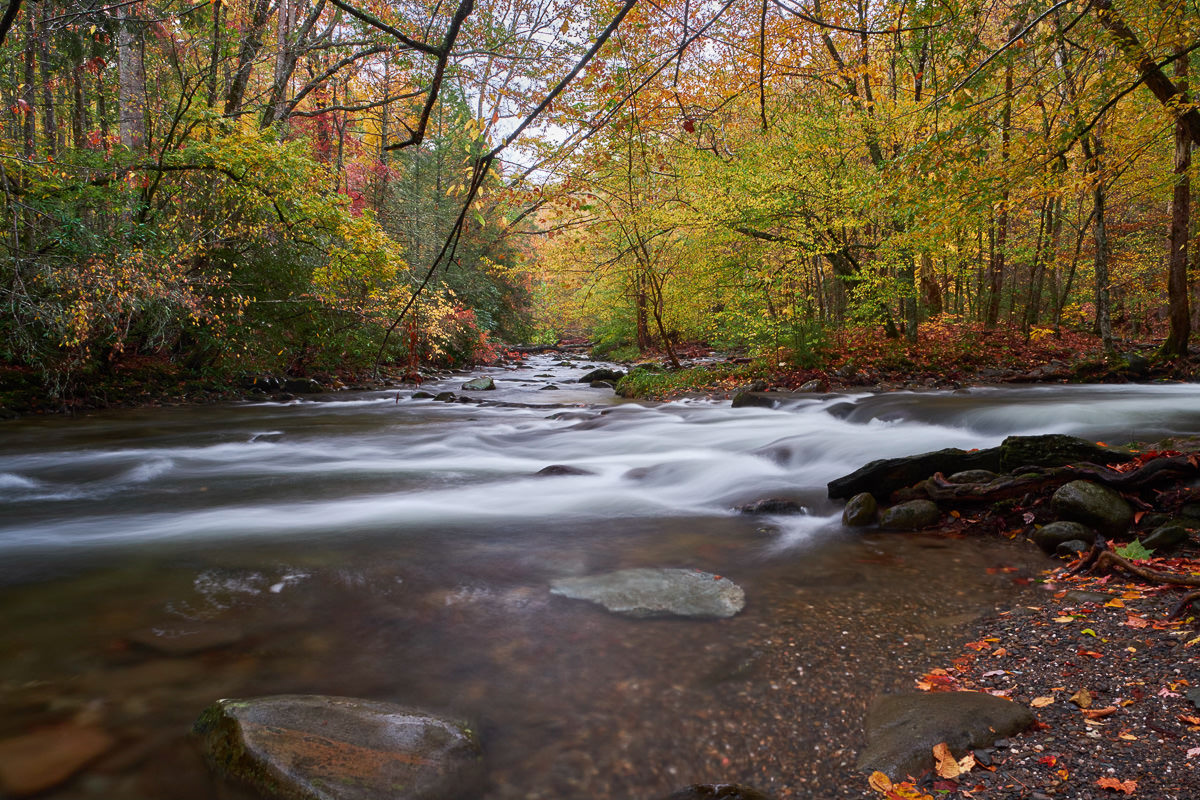 Tired, wet, and hungry, I headed into Townsend after noting exactly where I needed to return. I stopped into the Mexican restaurant, but before they could even bring my water, the power went out – and stayed out, so I headed to Tremont Lodge to check in instead.

The power was out there as well, and the rain really coming down as I checked out my room. Rachel updated me on the in-progress Michigan game, and I used the Fuji app to transfer a few images to my phone to send her.

When I did that, I realized that the last set of images had large water drops on the lens because it had been raining so hard, which was disappointing because I was excited to see those images. I got something to eat, then headed back to the place where I had shot earlier, so I could re-shoot the last set of images, along with a few new views.

This time, I held the golf umbrella over me and the camera the entire time, which was a bit of a pain, but it kept me a lot warmer – and kept my lens cleaner. From there, my excitement was very high to return to the spot I’d been trying to find for so long, and I got a bunch of good photos and video clips there as well. 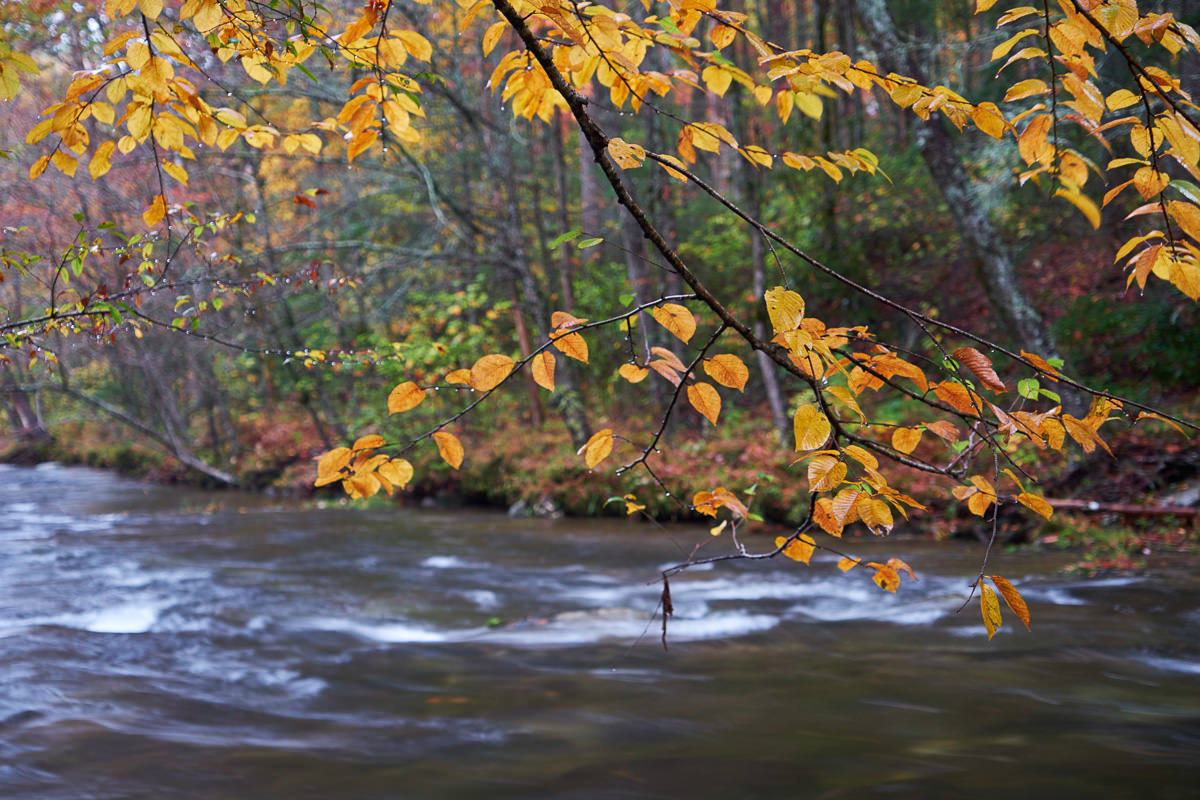 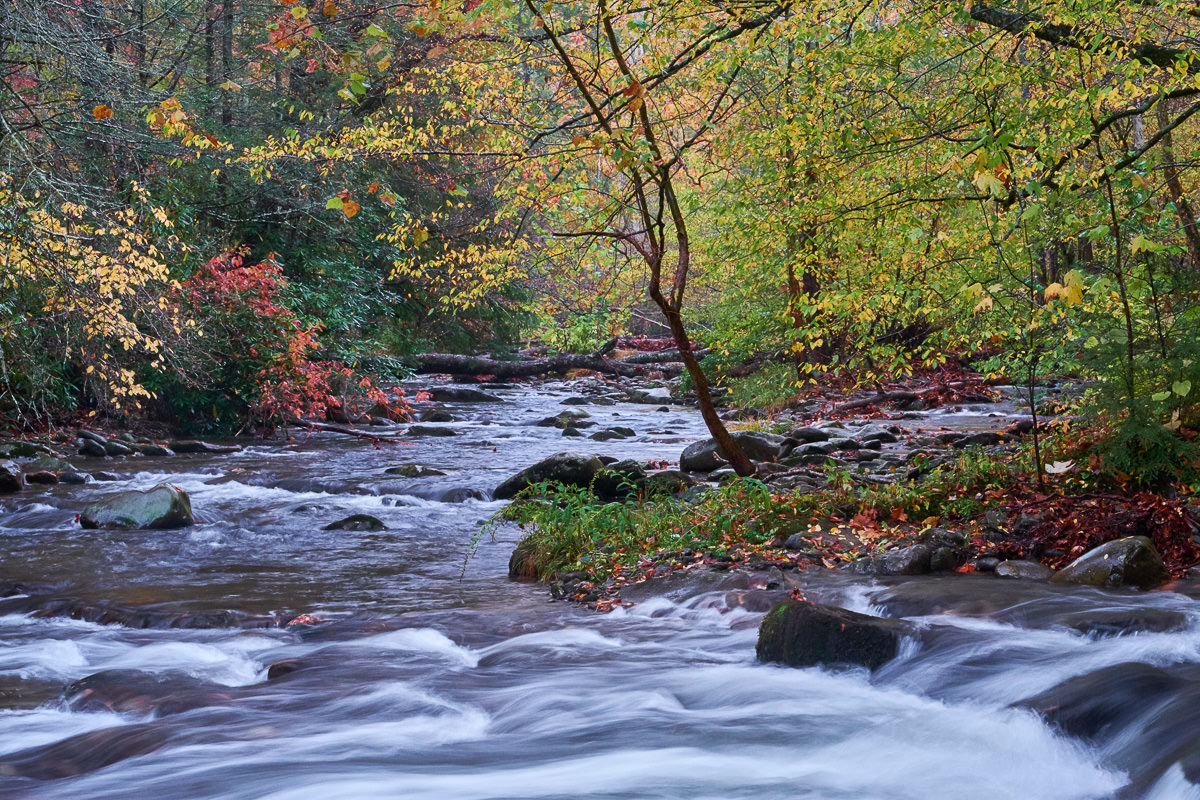 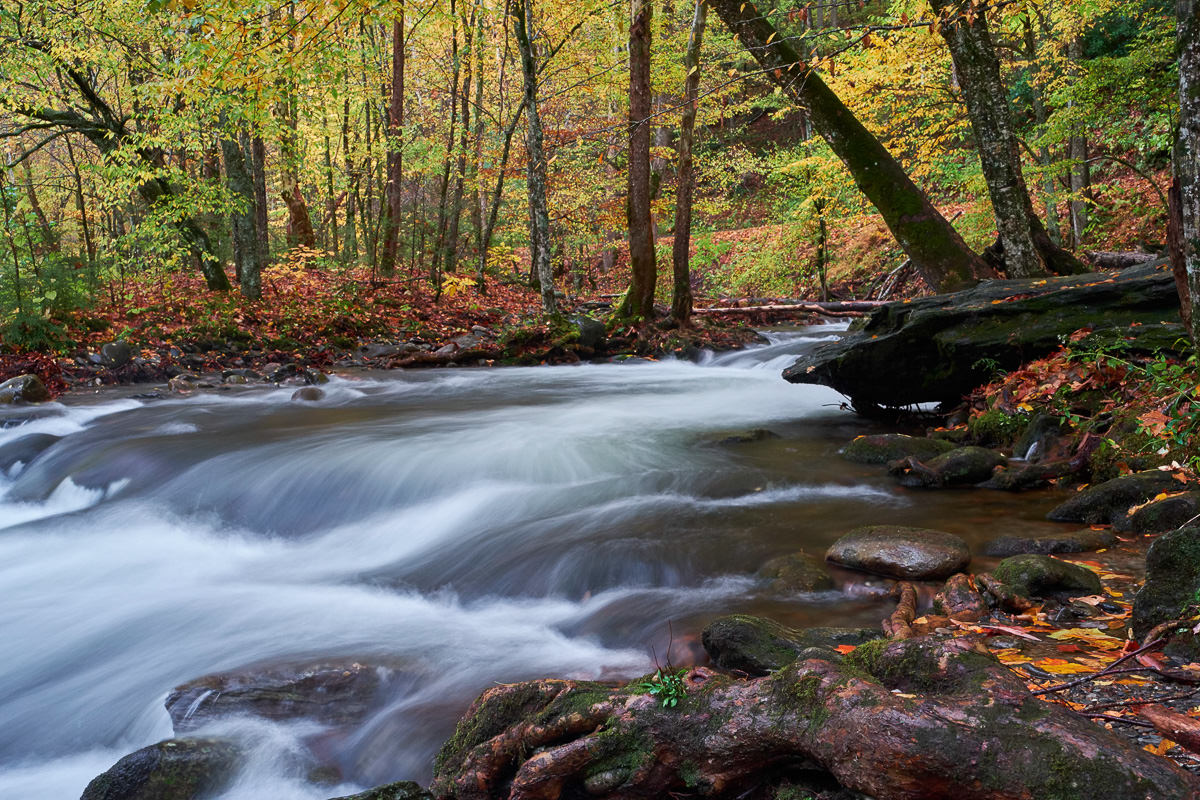 At this point, it was after 6 and getting dark rapidly, so I decided to add some of the traffic into the frame and combine the long exposure of the cascading river with the light trails from the approaching cars. 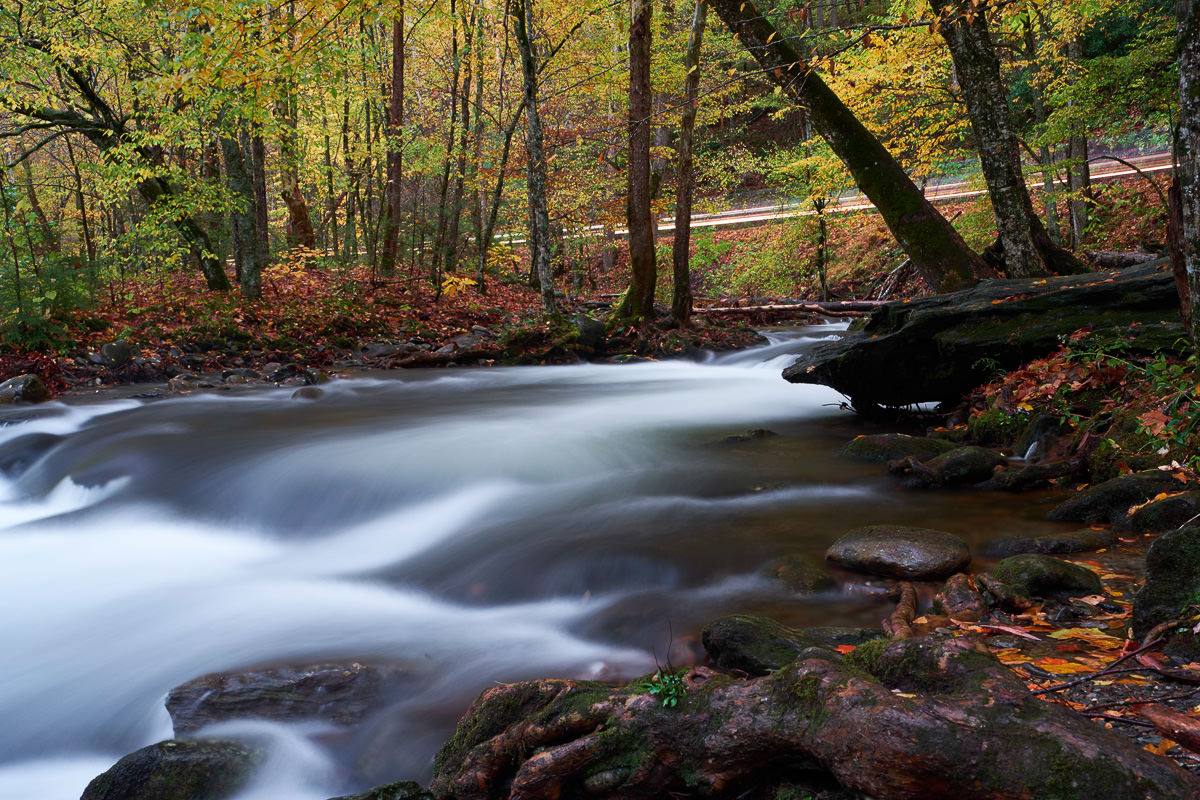 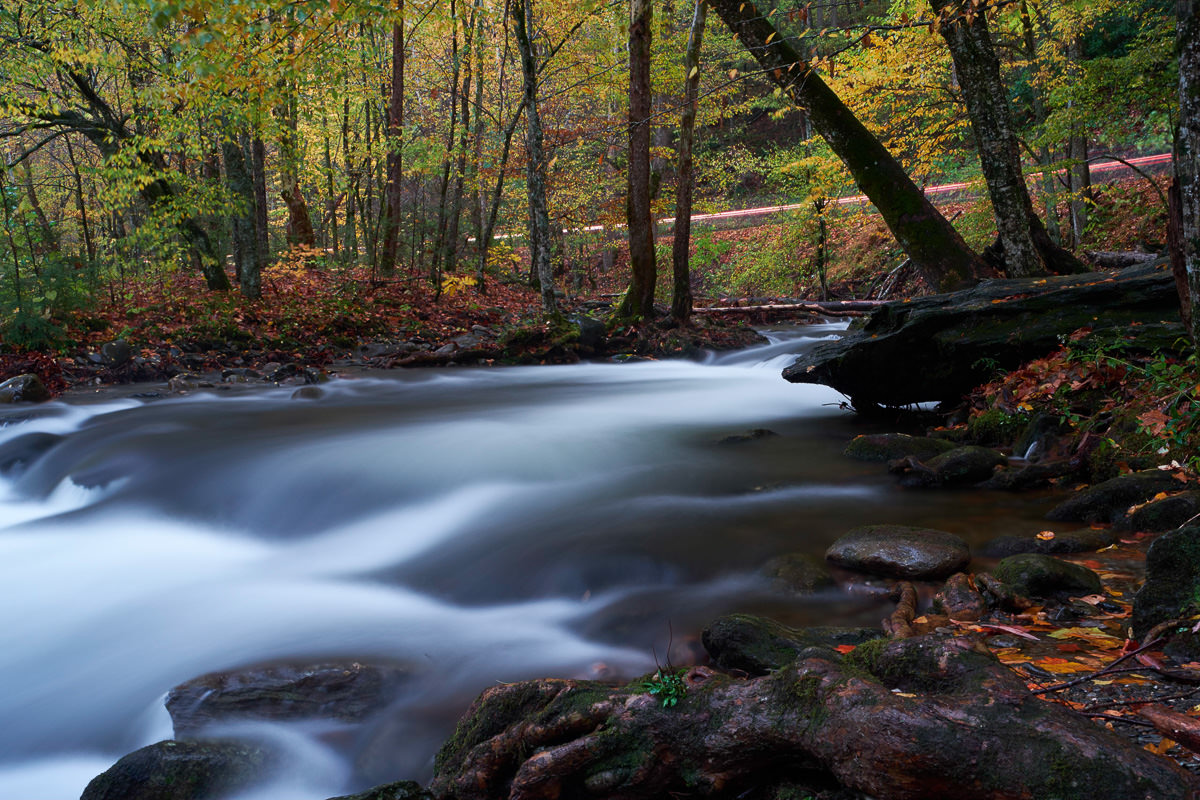 There was no opportunity to photograph sunset or the night sky on this day, so I headed back to Tremont Lodge and got to work processing.