Yesterday’s 42 and heavy rain are this morning’s 24 and heavy snow.

My plan for today had been to hike at Tremont, so I headed up past the Tremont institute and stopped along the road to Middle Prong Trailhead. I tried taking a few pictures, but it was snowing so heavily that I was mostly getting pictures of snow, so I switched to video and then also shot some time lapse. 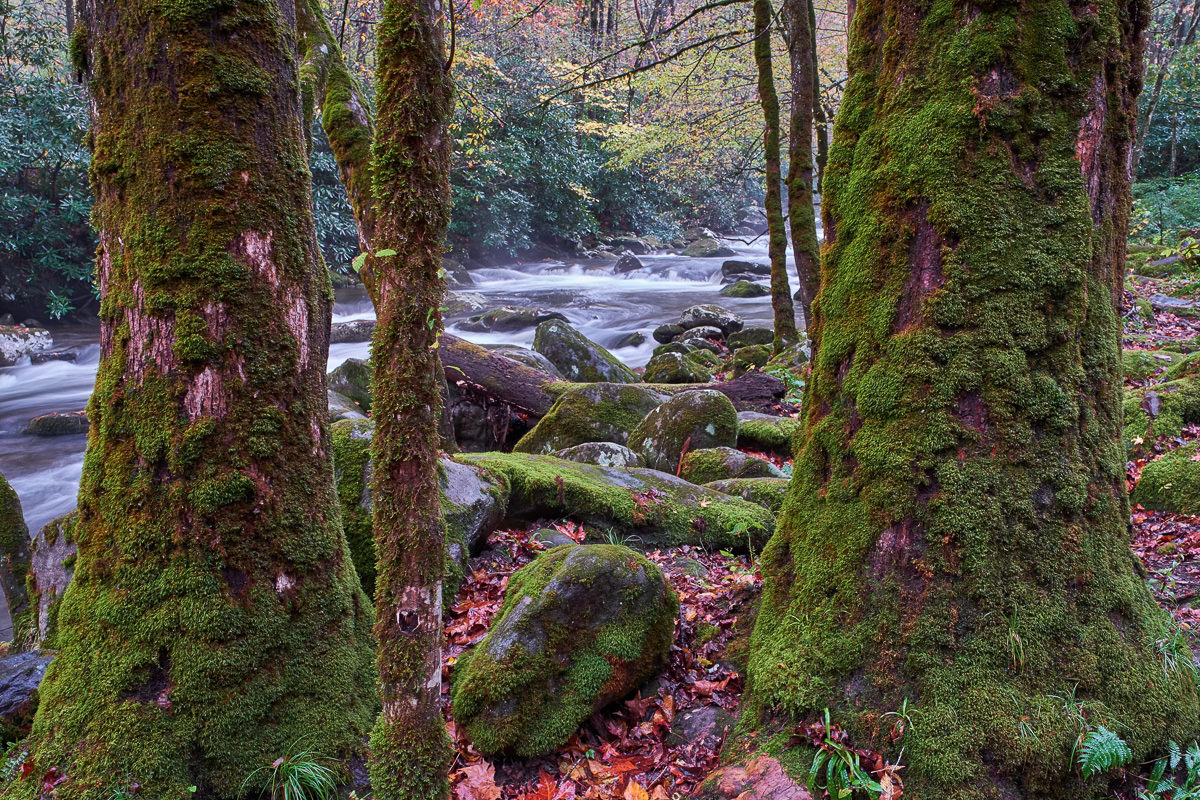 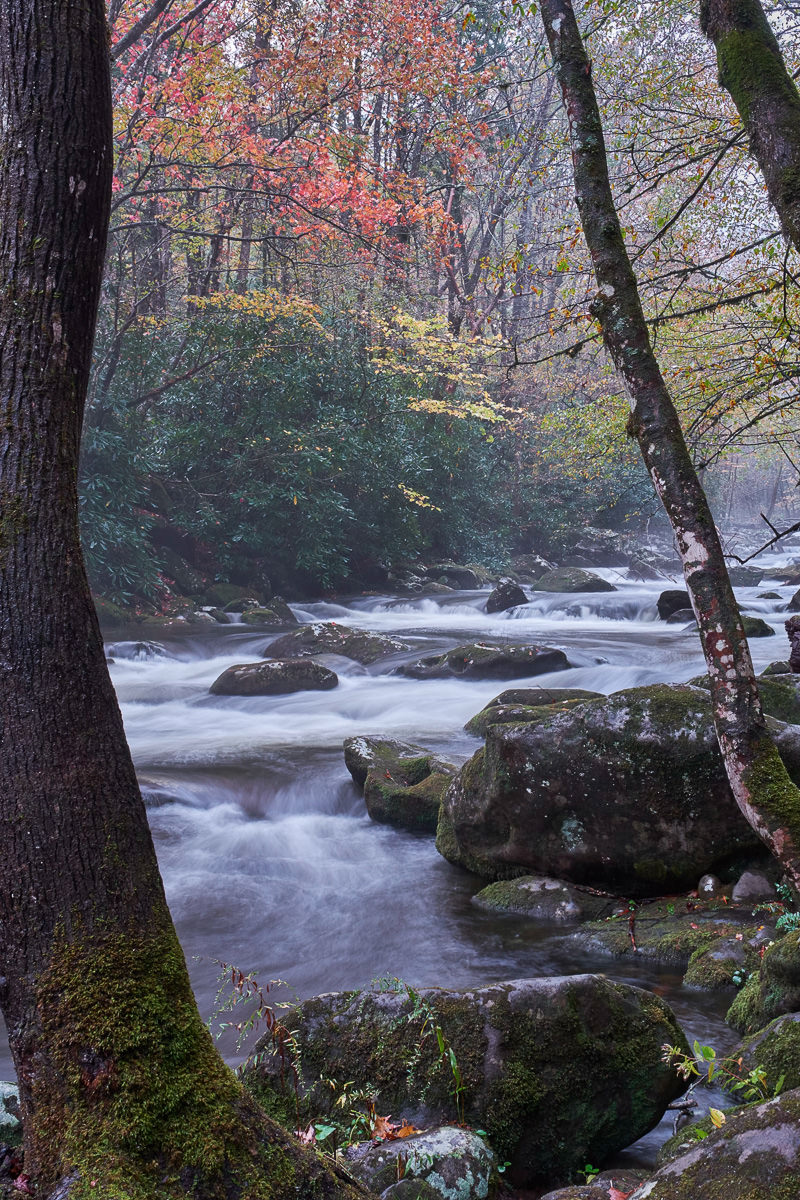 I have some amazing video footage from this trip, and that’s coming in a future post once I get around to editing it together – but here’s an example:

It was a very interesting day, because the lower elevations were just wet but the upper parts where covered in wet heavy snow. In many places around the park, this meant that the first forty to sixty feet above ground were just wet, and they showed their fall colors perfectly, while the heavy snow hung just above. 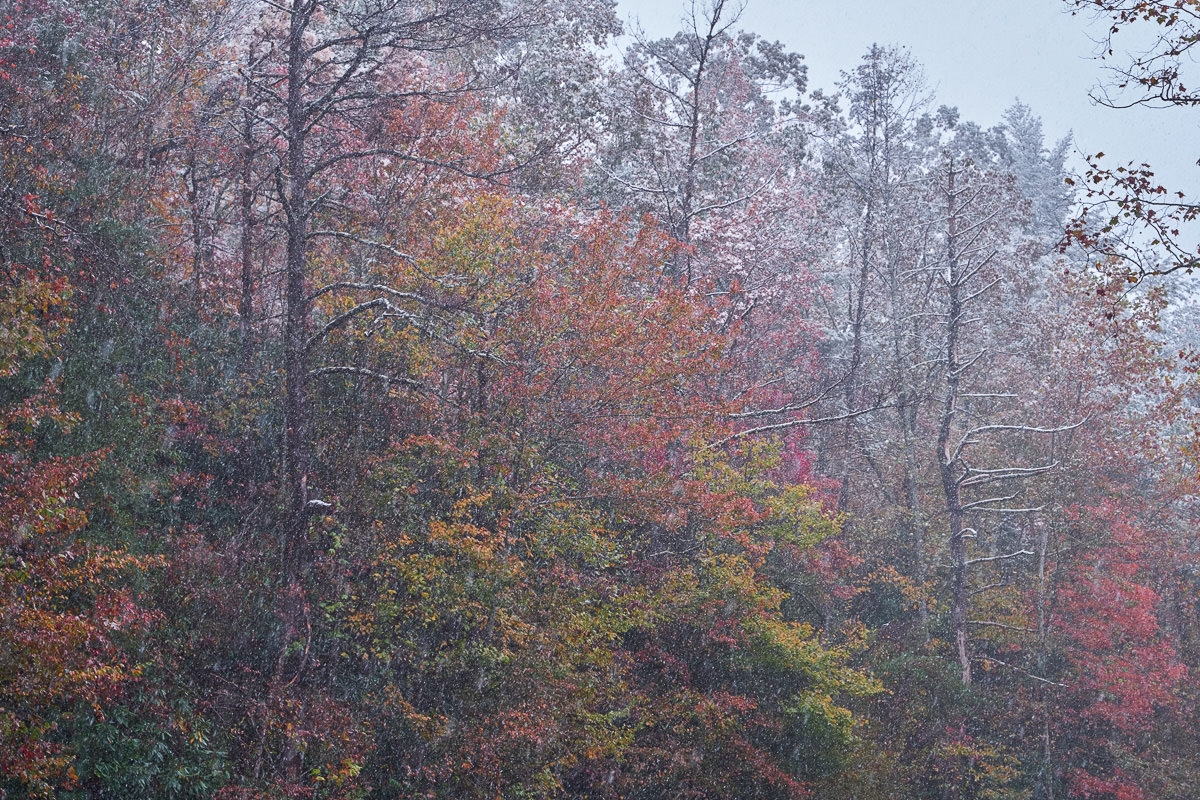 It was very cool.

After shooting a couple spots, I drove east to Elkmont, where I saw this phenomenon all along Little River road. At Elkmont, I took pictures of the troll bridge for the first time, despite having hiked Little River Trail at least three times over the past few years. It’s a neat spot among the Elkmont homesteads. 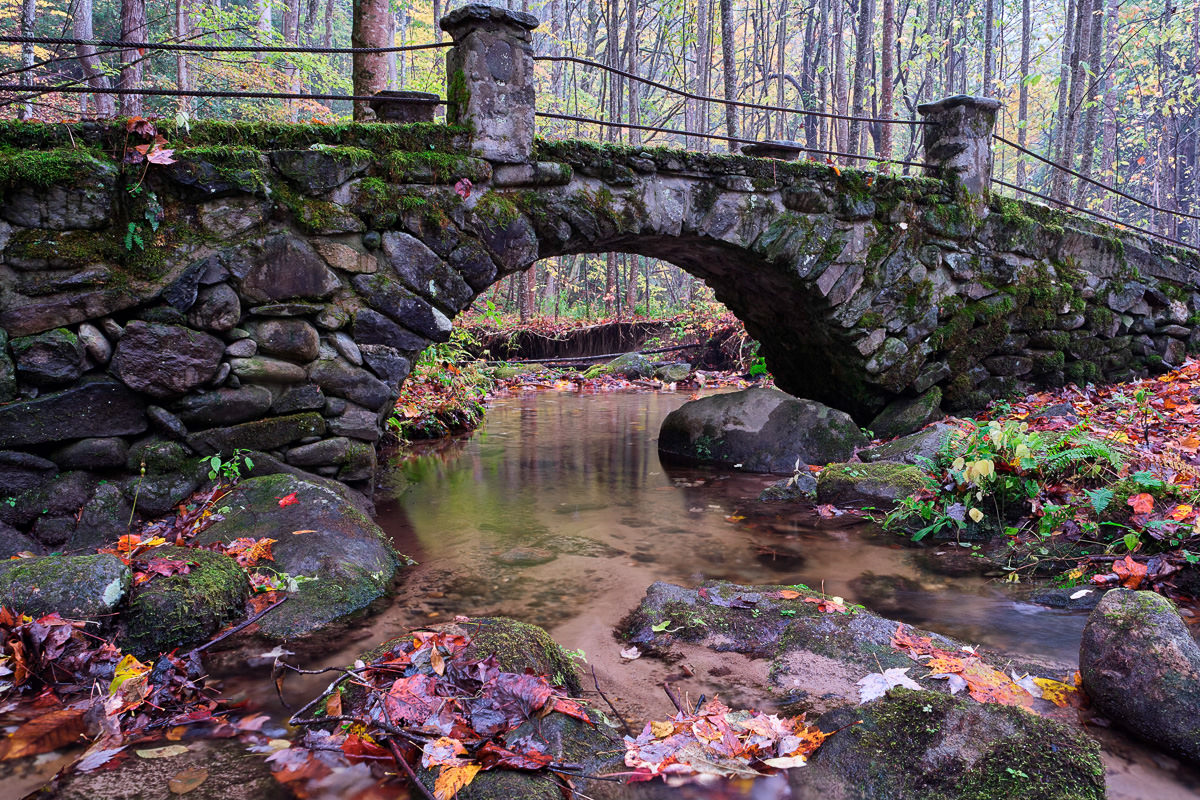 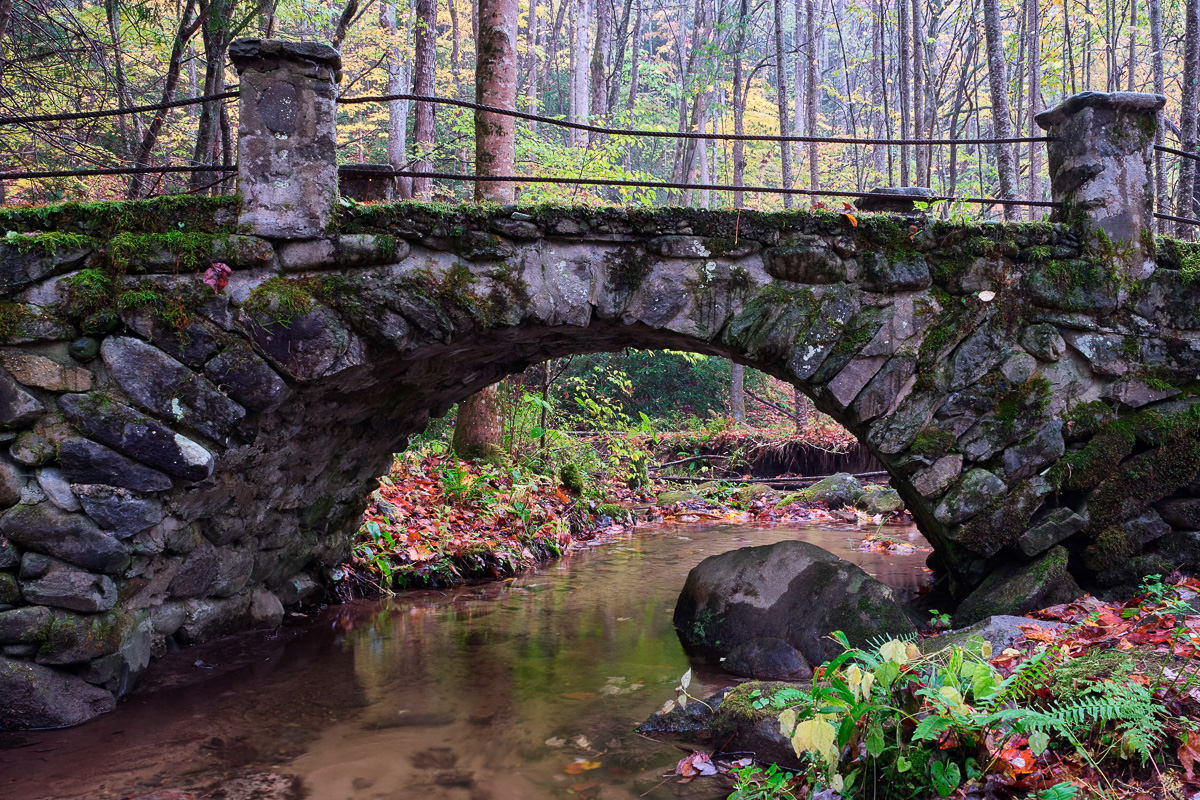 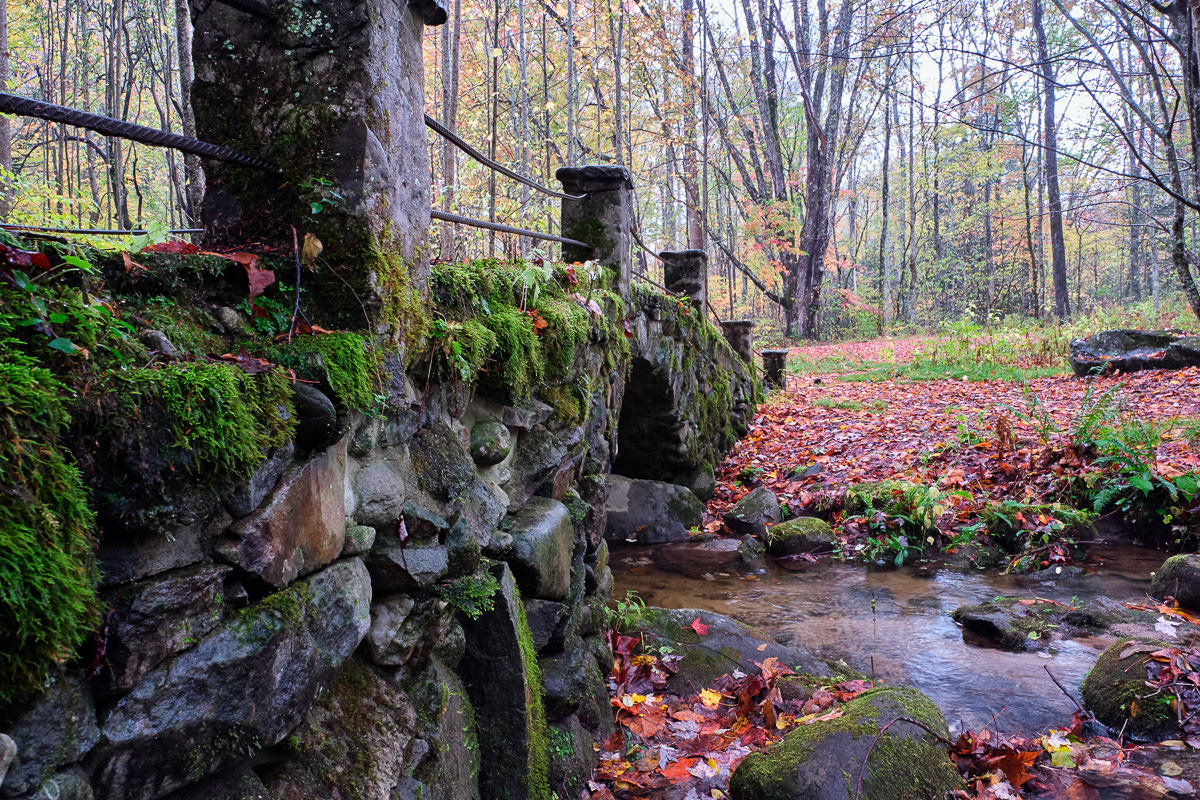 After a quick trip to the hotel to pull files off the memory cards, I headed up the road towards Cades Cove, which also had the snow & fall colors mix happening. 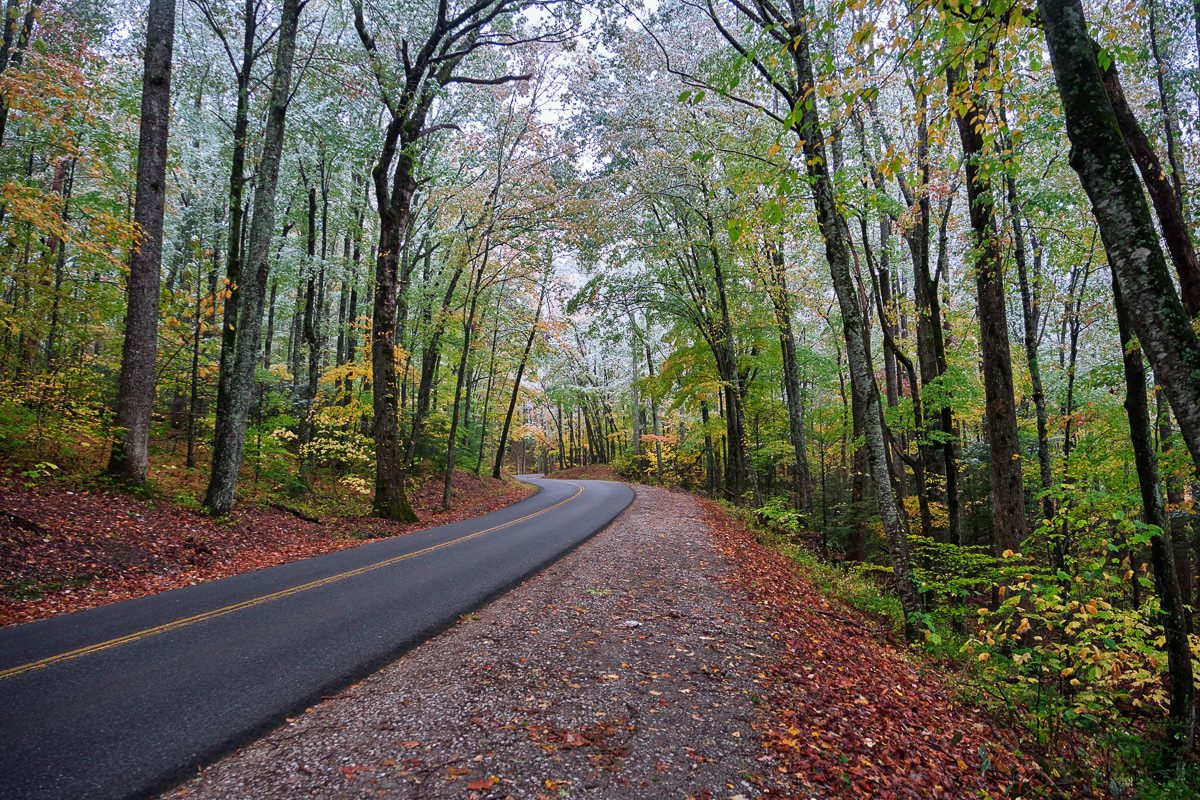 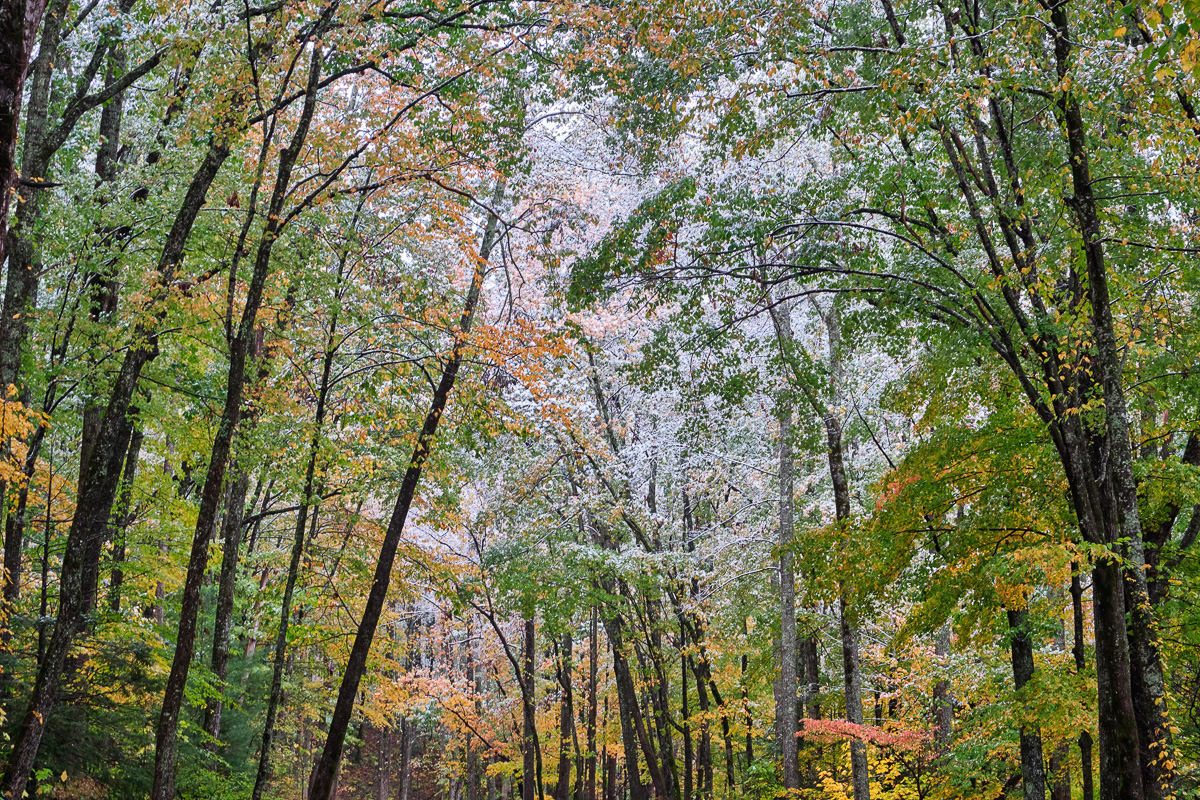 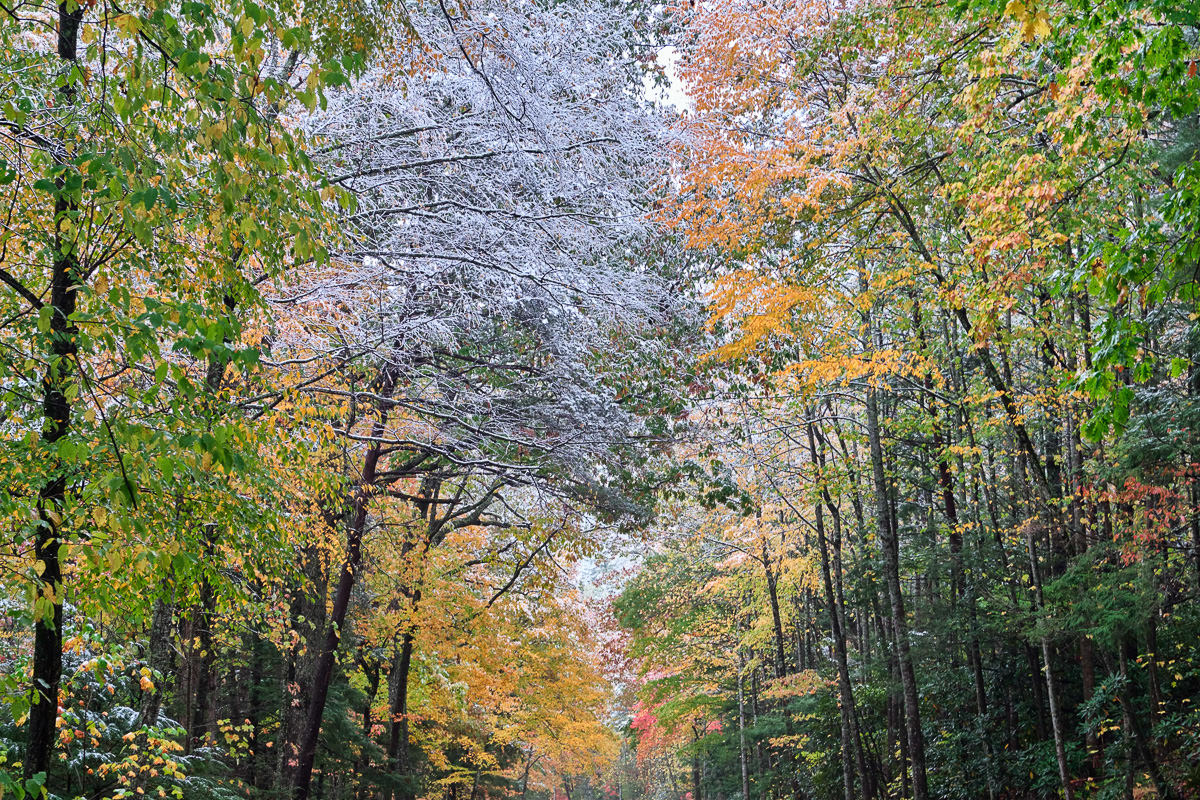 I parked just outside the loop at Cades Cove’s entrance, because I knew the loop would be a logjam. I set up a few timelapses from this spot, because the clouds were wrapping around the snow-covered peaks in the distance, beyond the fall colors nearby. It was a continuous traffic jam behind me as people stopped to gawk at wild turkeys, validating my decision not to enter the loop on a weekend. 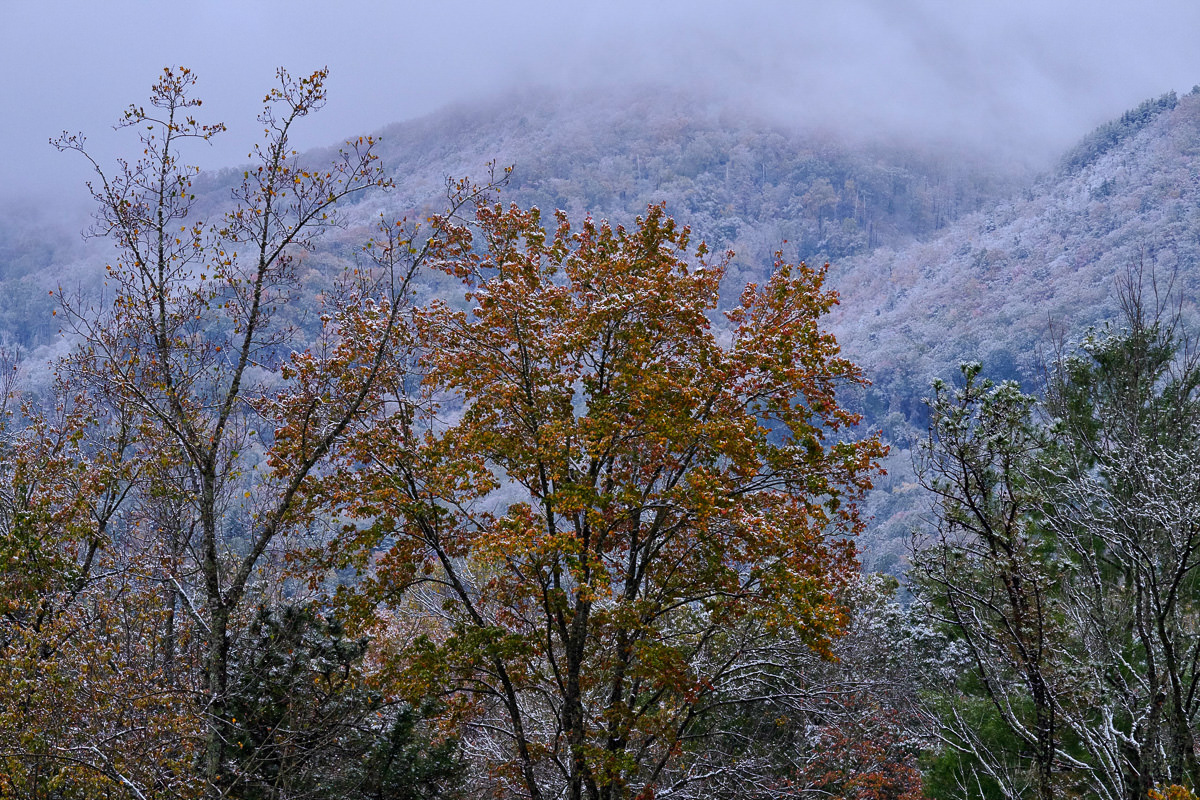 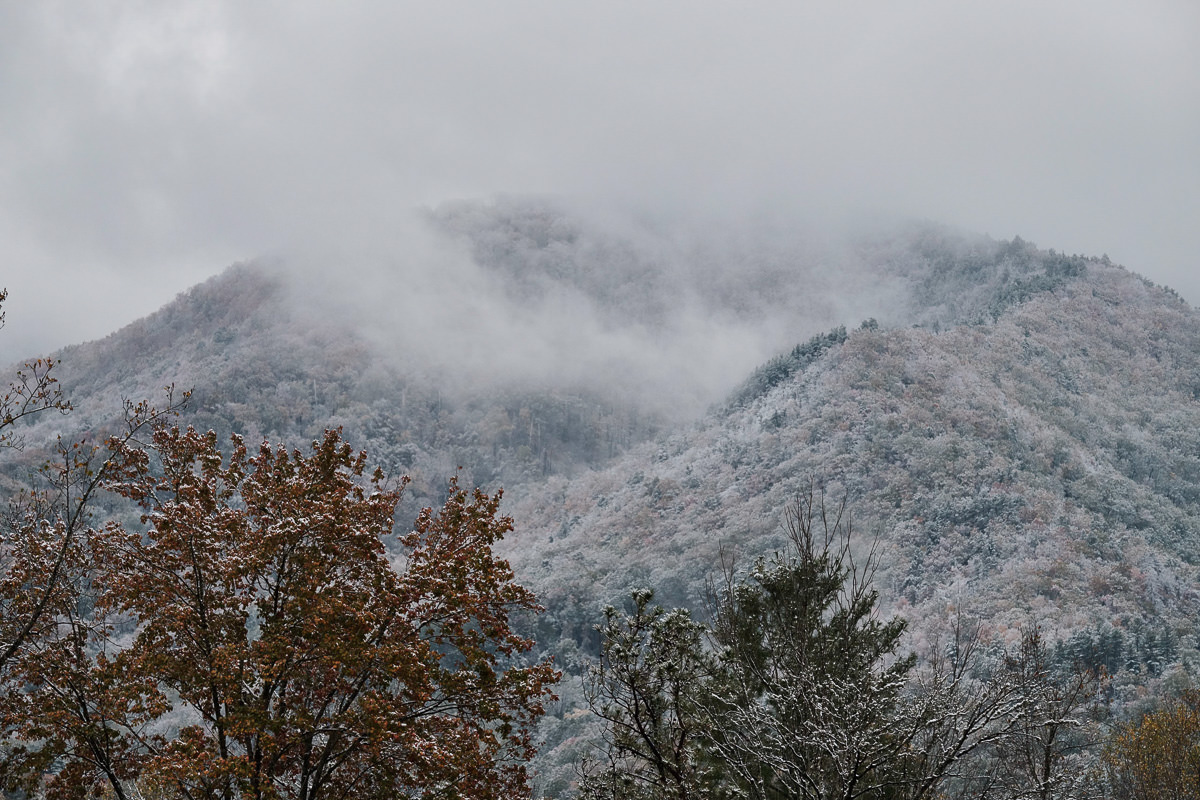 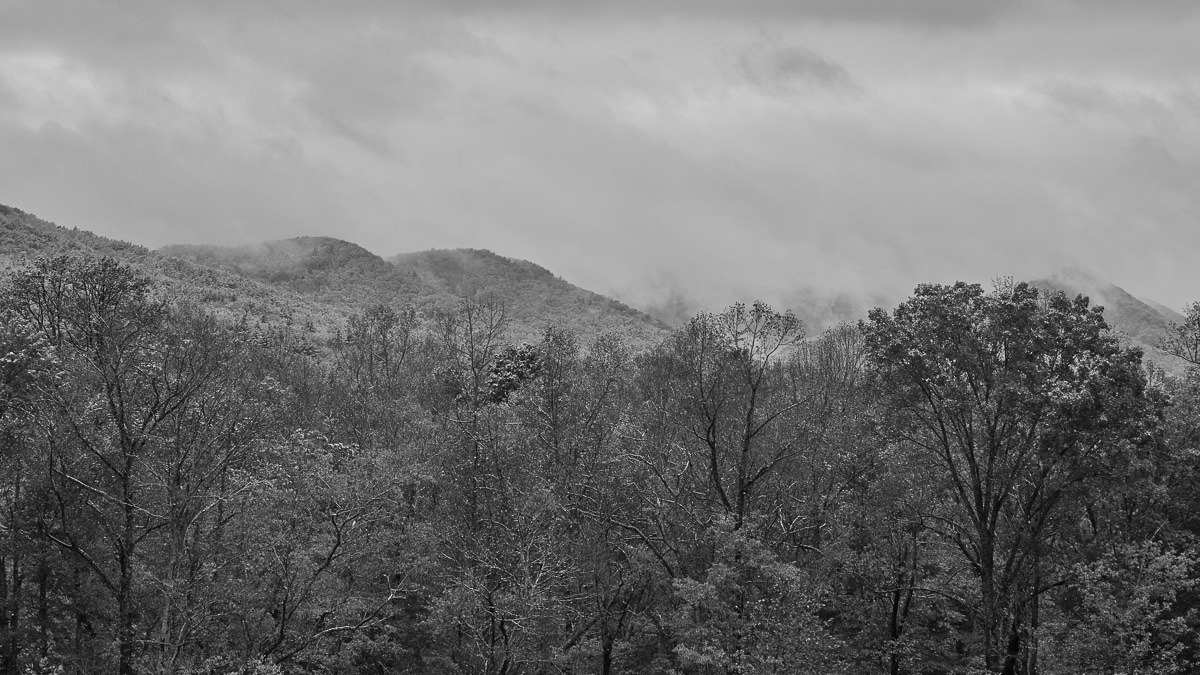 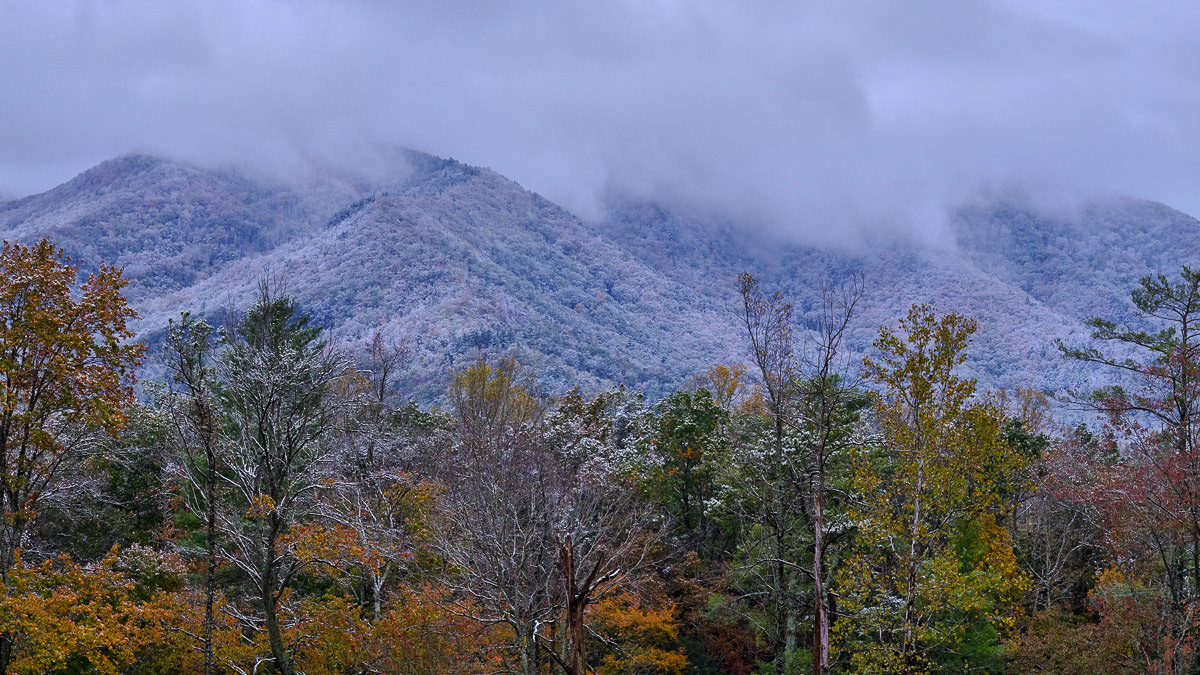 At this point Sunday afternoon, I had not seen the sun or a hint of clear sky since Friday, but the moisture was starting to let up, so I gambled that I might get a shot at sunset from Foothills Parkway, which is just outside of Townsend. As I drove along the parkway, I could see just a sliver of red sky under the clouds, and I stopped at the same overlook where I shot the night sky for the first time a year ago. The snowy trees, distant fall colors, lake, and sunset made for a great spot to take a few pictures. 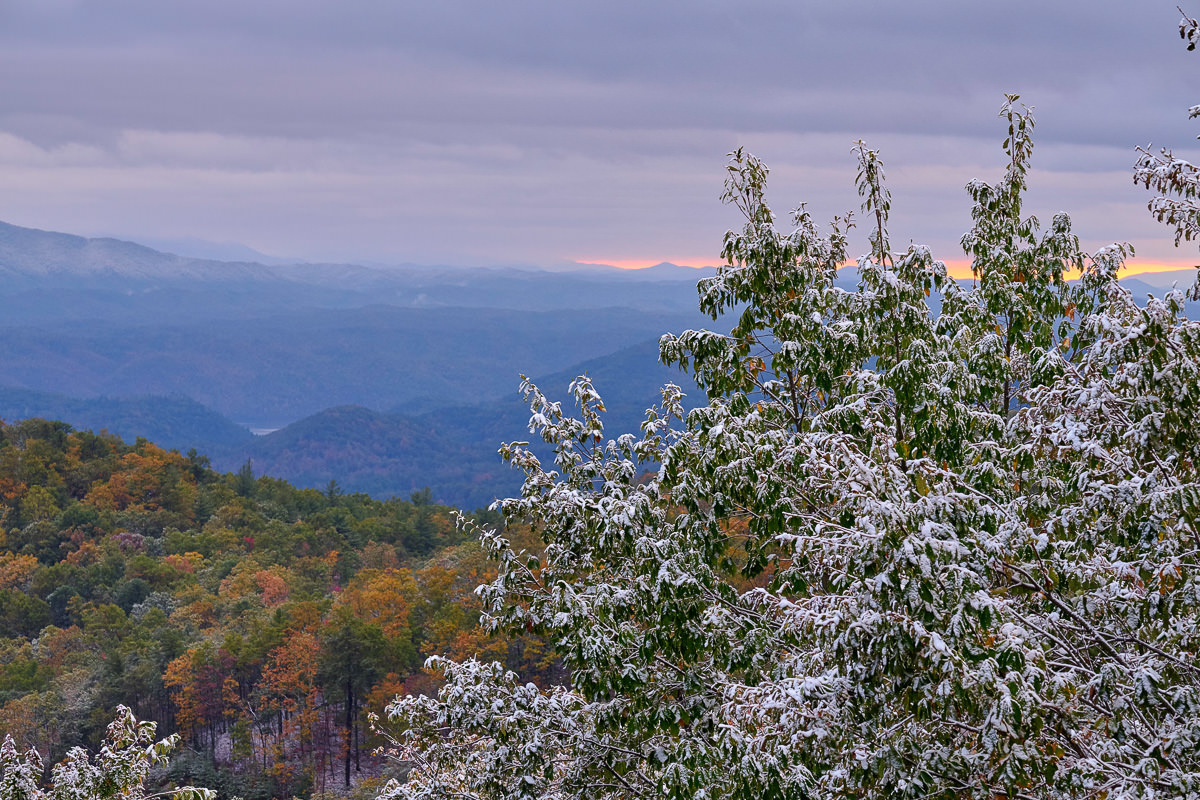 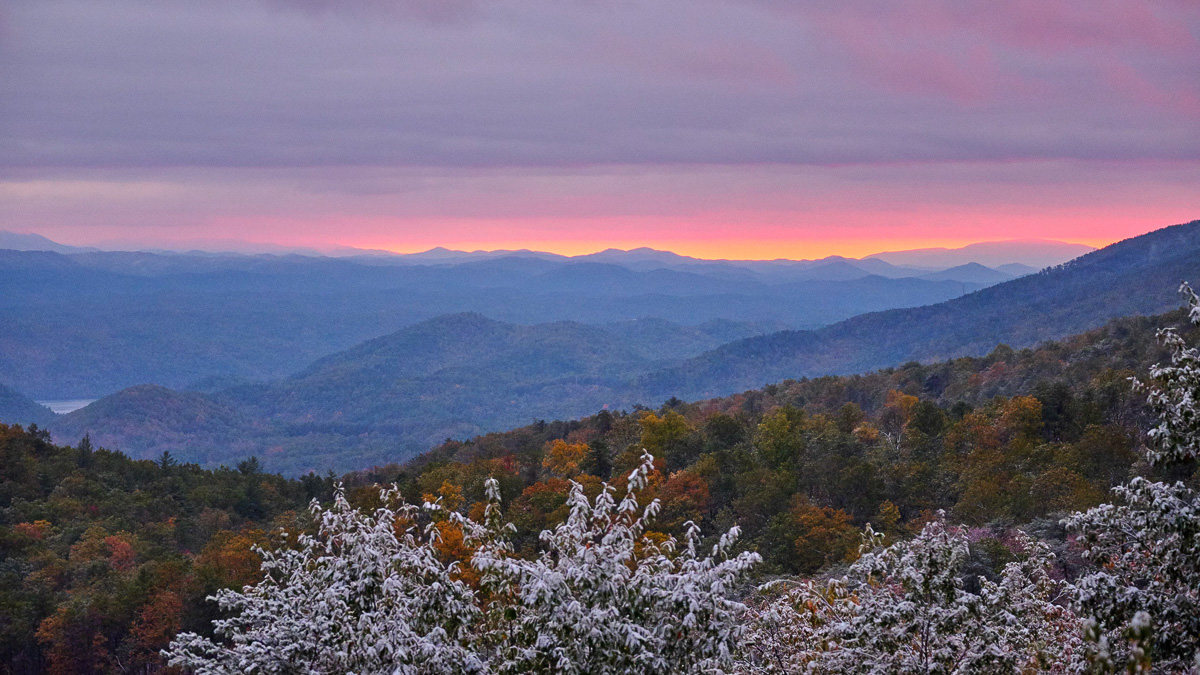 I met a few other photographers while I was there (including Kellie – check out her great work!), and it also made the perfect opportunity to try out my Timelapse+ View for the first time. It automatically adjusts the exposure for day to night or night to day timelapses and makes them much easier to edit.