A week ago, I made another trip to DuPont State Park on a morning that Greenville was completely fogged in. As I wound up the road to Caesar’s Head, the sun suddenly burst through the fog and nearly blinded me, but I also knew immediately that it would be worth stopping at the Caesar’s Head overlook. And I was right.

Downtown Greenville is under this (normally visible around the middle of this picture at the horizon line): 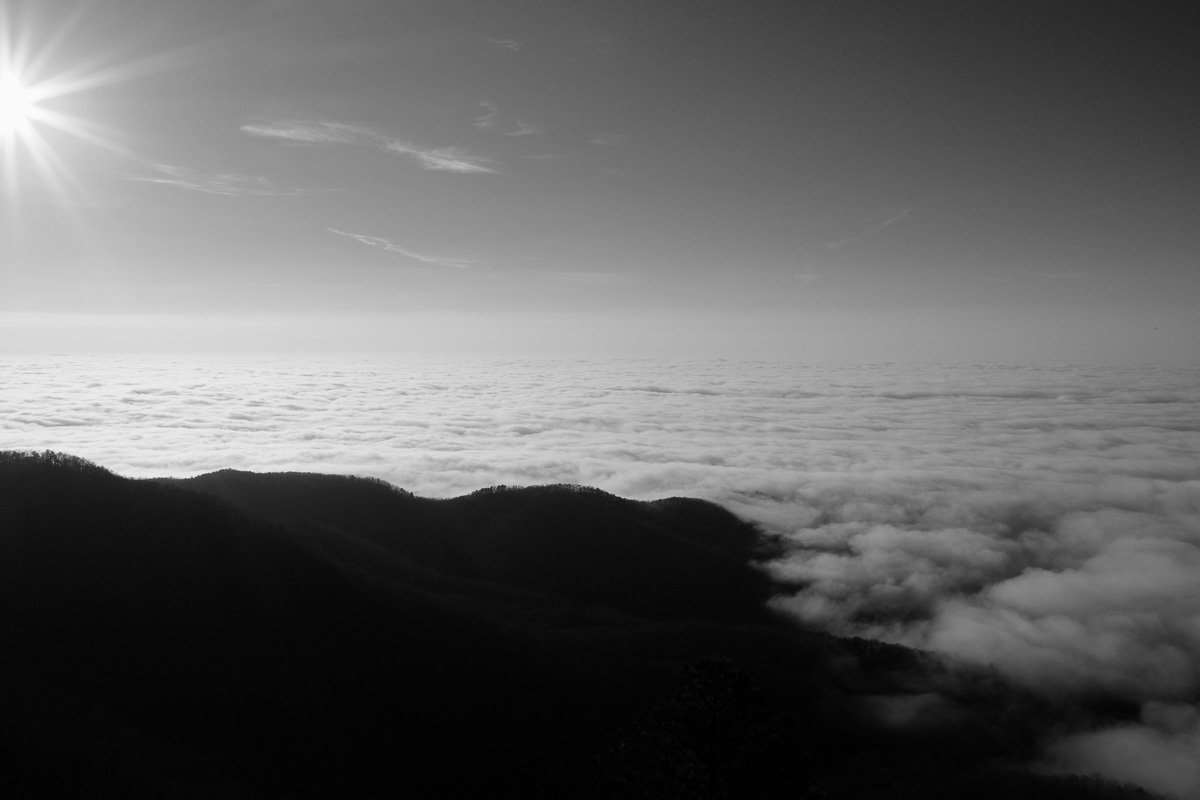 This was shot a bit before 9am, and there were a few other photographers up there that I met and chatted with a bit.

Here’s a shot of Table Rock in the distance, with all the lower elevations fogged in: 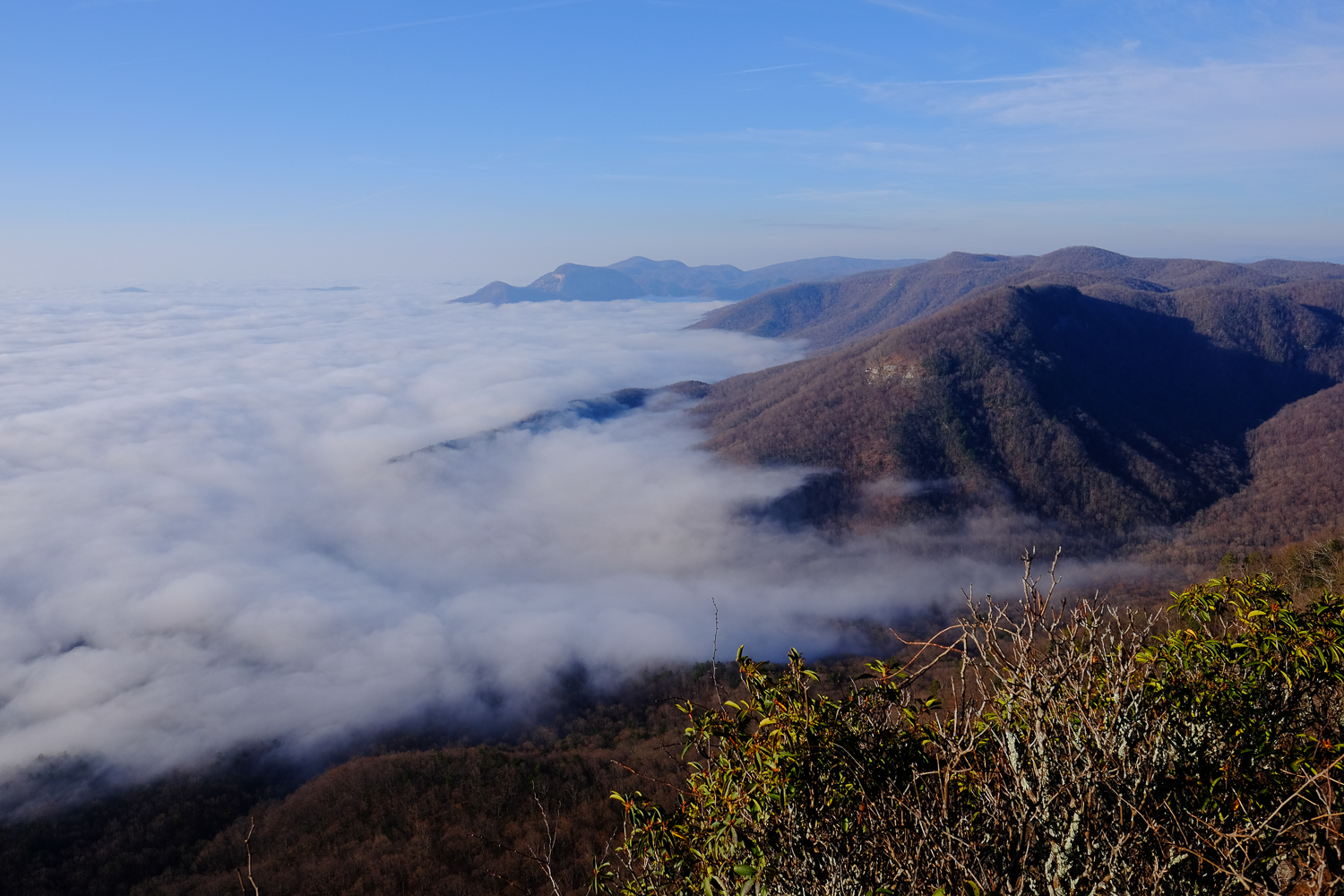 It was a wonderfully peaceful setting, but this was not my destination for the day, so I pushed on to DuPont. The NC side of the hills had much less fog, but there was still a bit on the lakes. 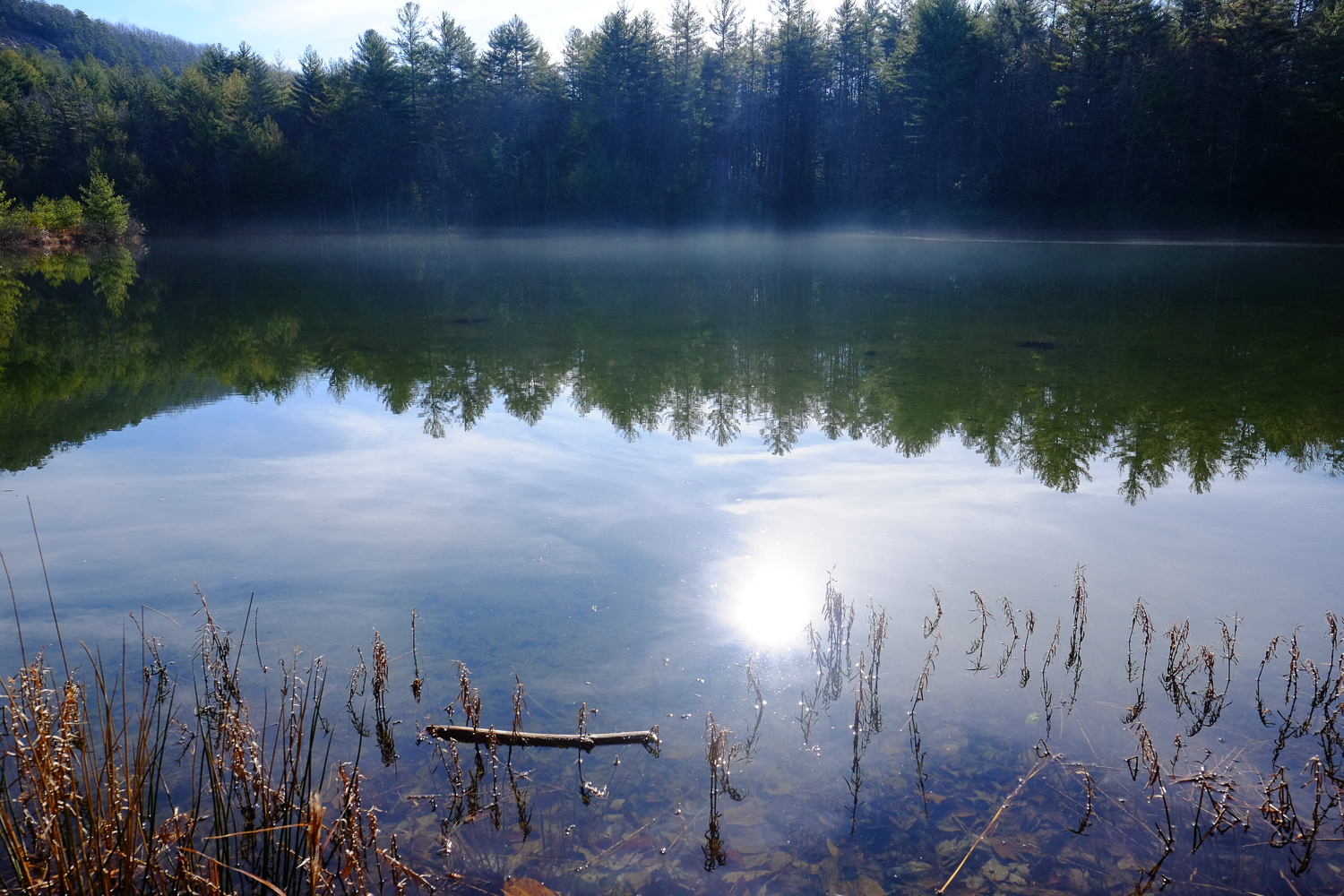 This was my first visit to the lakes of DuPont State Forest, and I was in love pretty immediately. 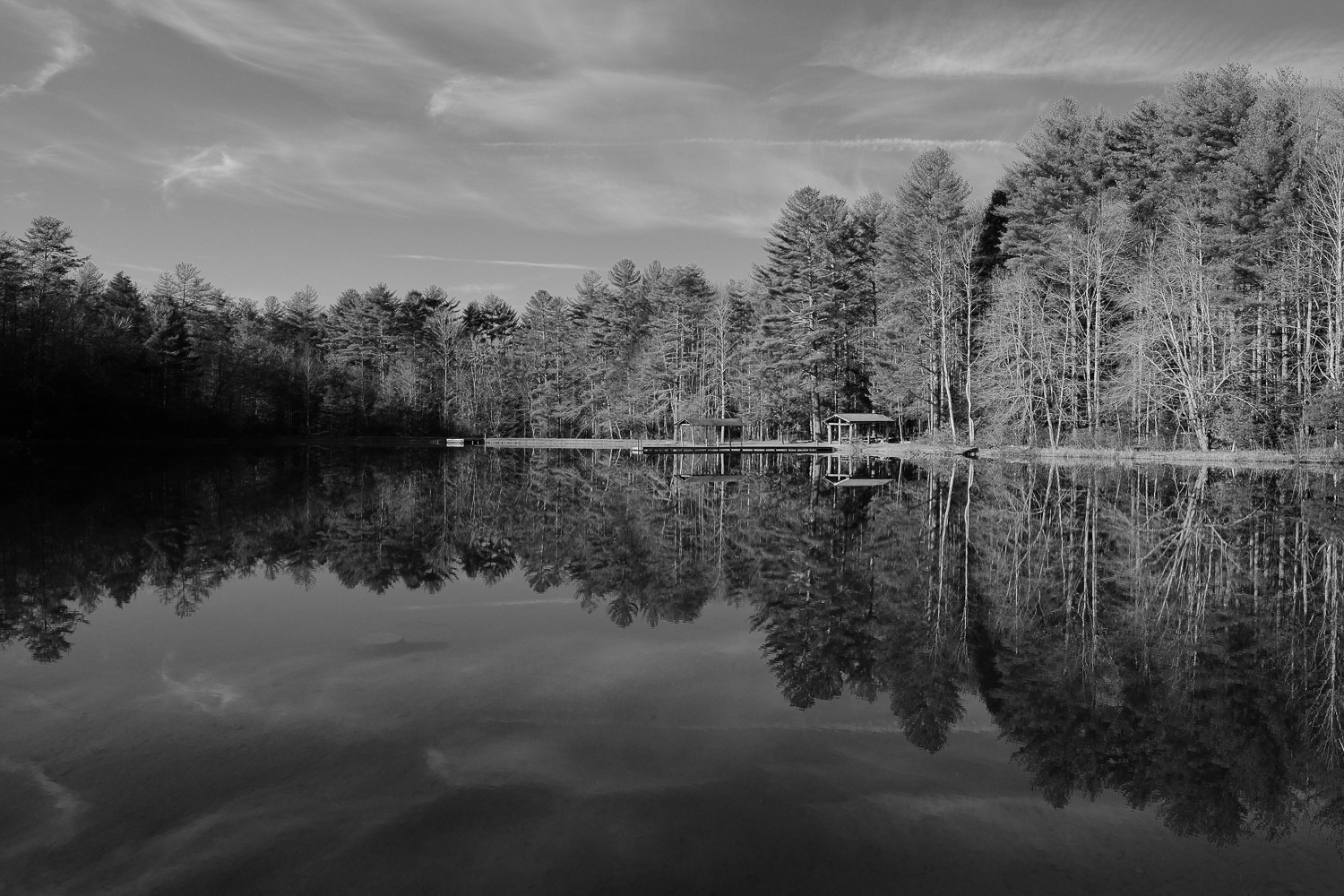 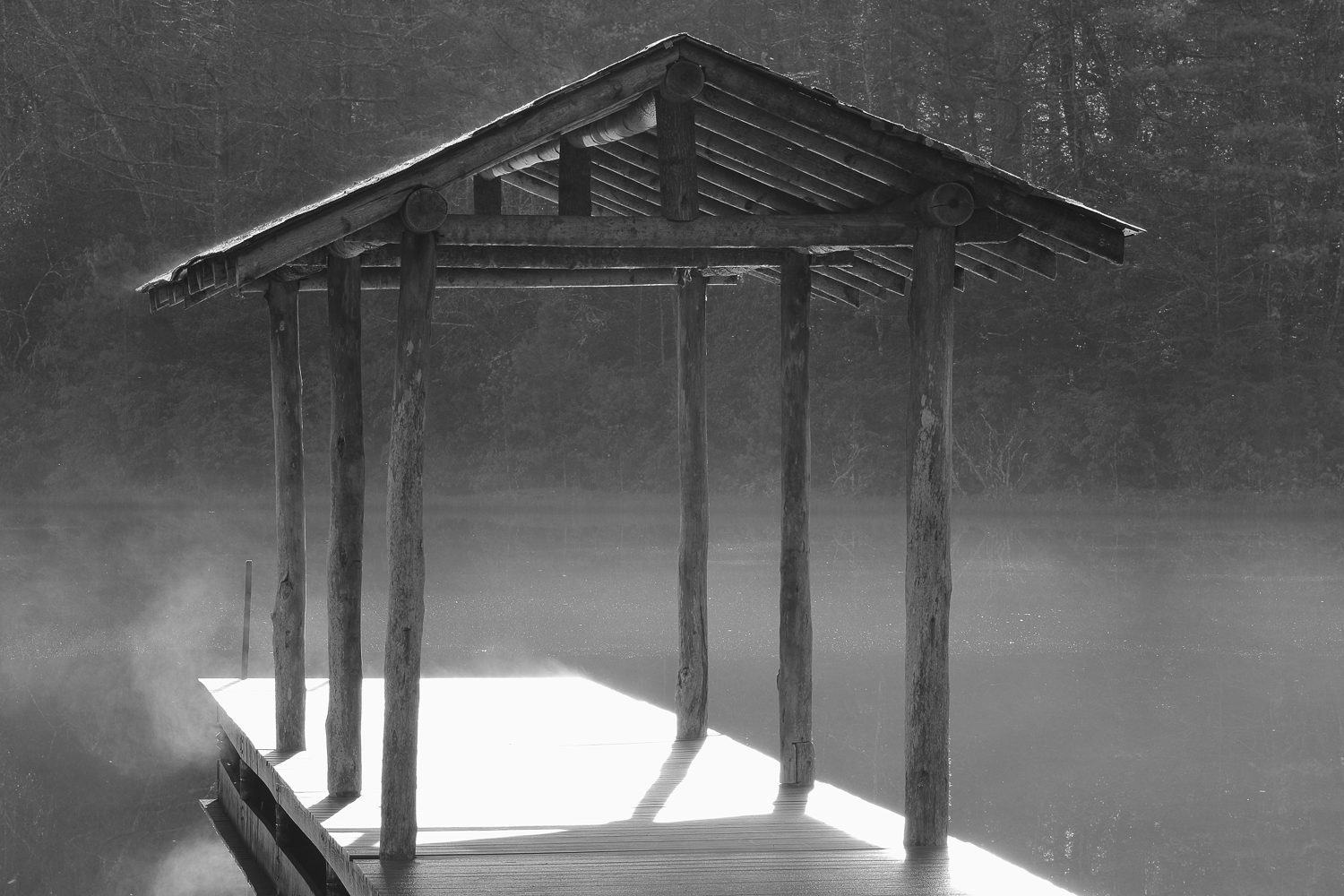 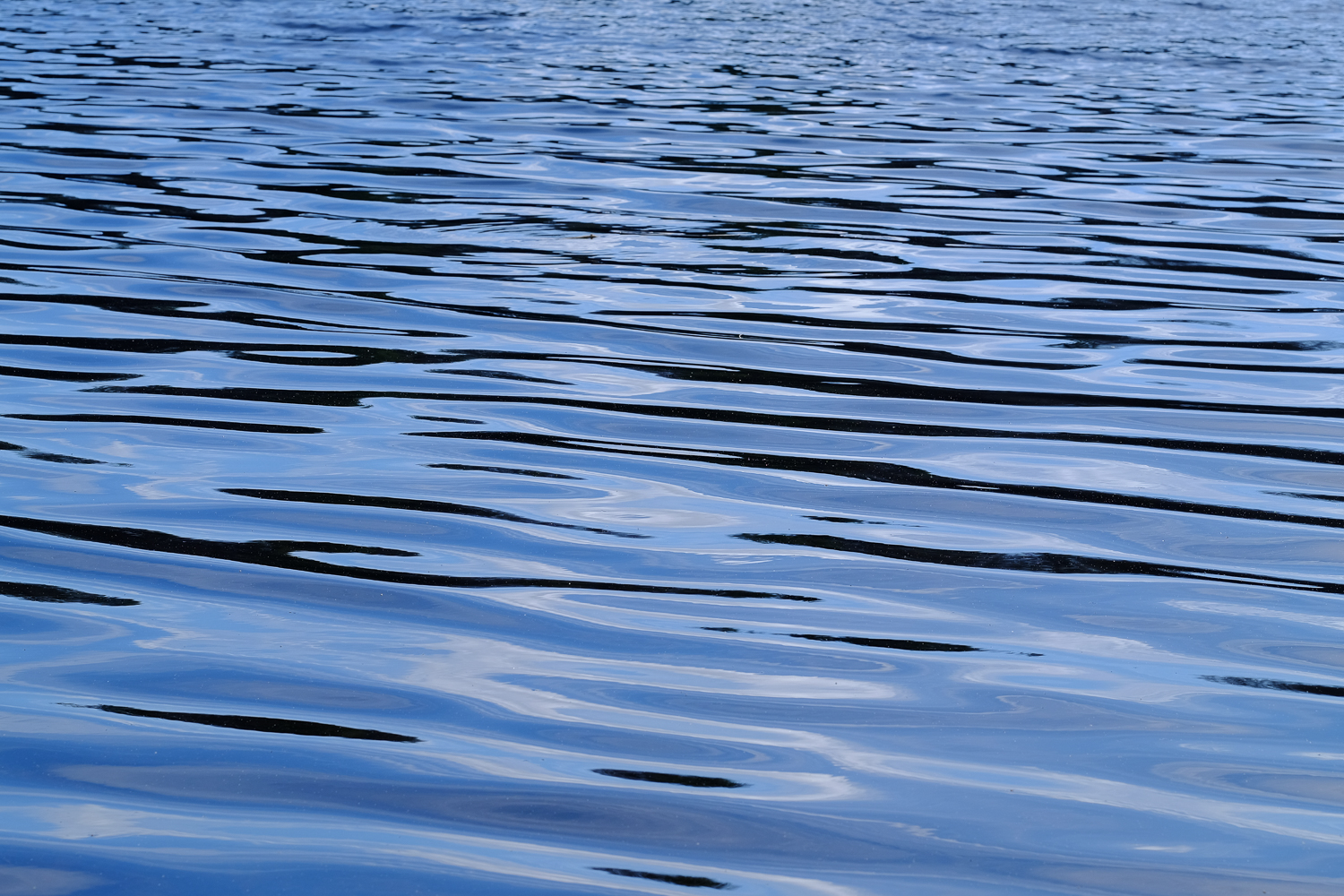 But this is not the magic morning I’m referring to in the title.

I had truly enjoyed my shoot pictured above, but I felt like I had gotten to the lakes a bit too late in the morning. So yesterday, I headed out early.

After a brief detour to take some sunrise pictures at Falls Park in downtown Greenville, I made the hourlong drive to DuPont and hustled out to Lake Dense, where I spent a truly magical hour making photographs. 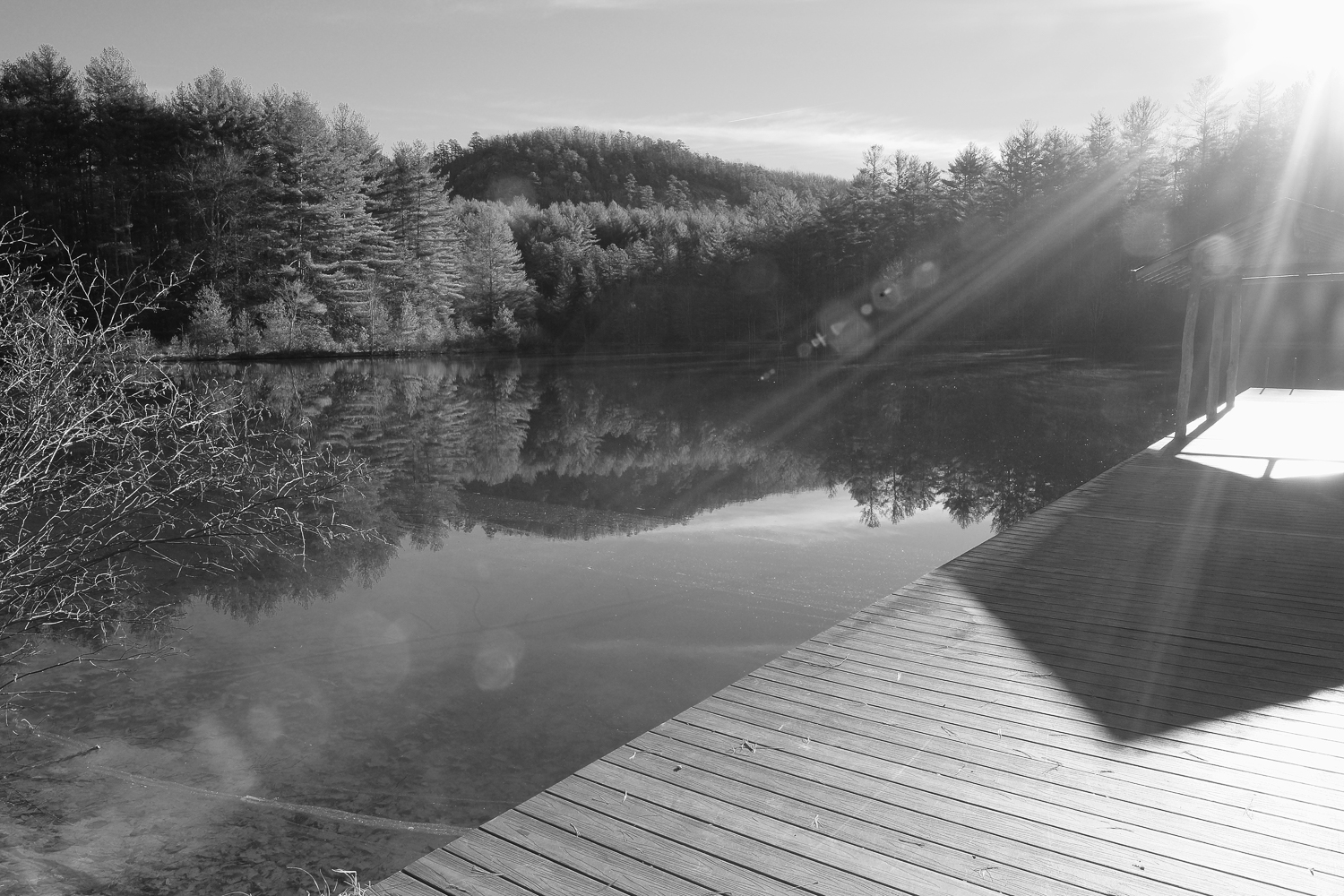 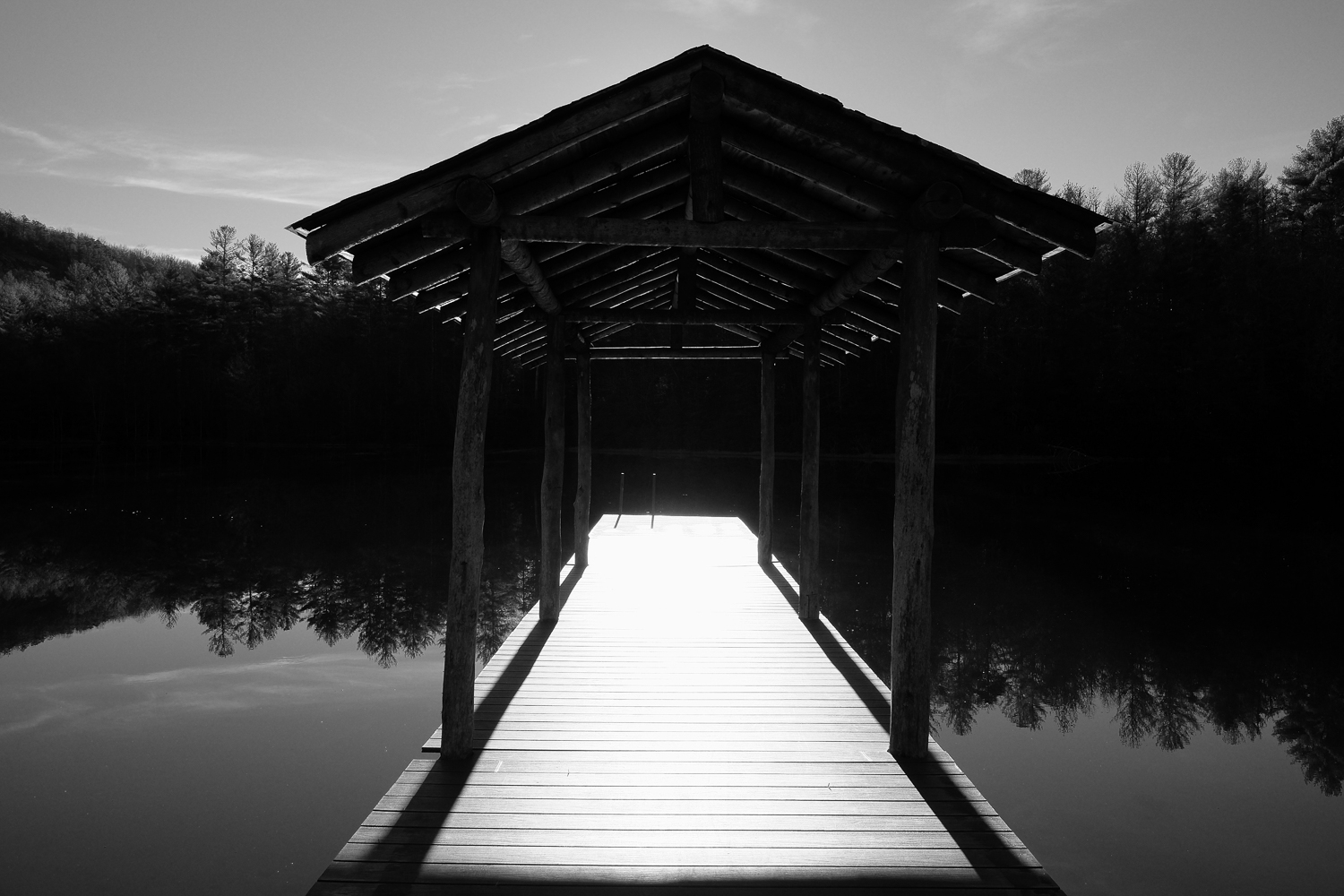 Those are pretty good pictures, right? I was happily shooting from the tripod and felt good about the images, but then I realized there was a great shadow at my feet, so I moved back a bit. Those are two-star images in my rating system (two-star is screensaver worthy). 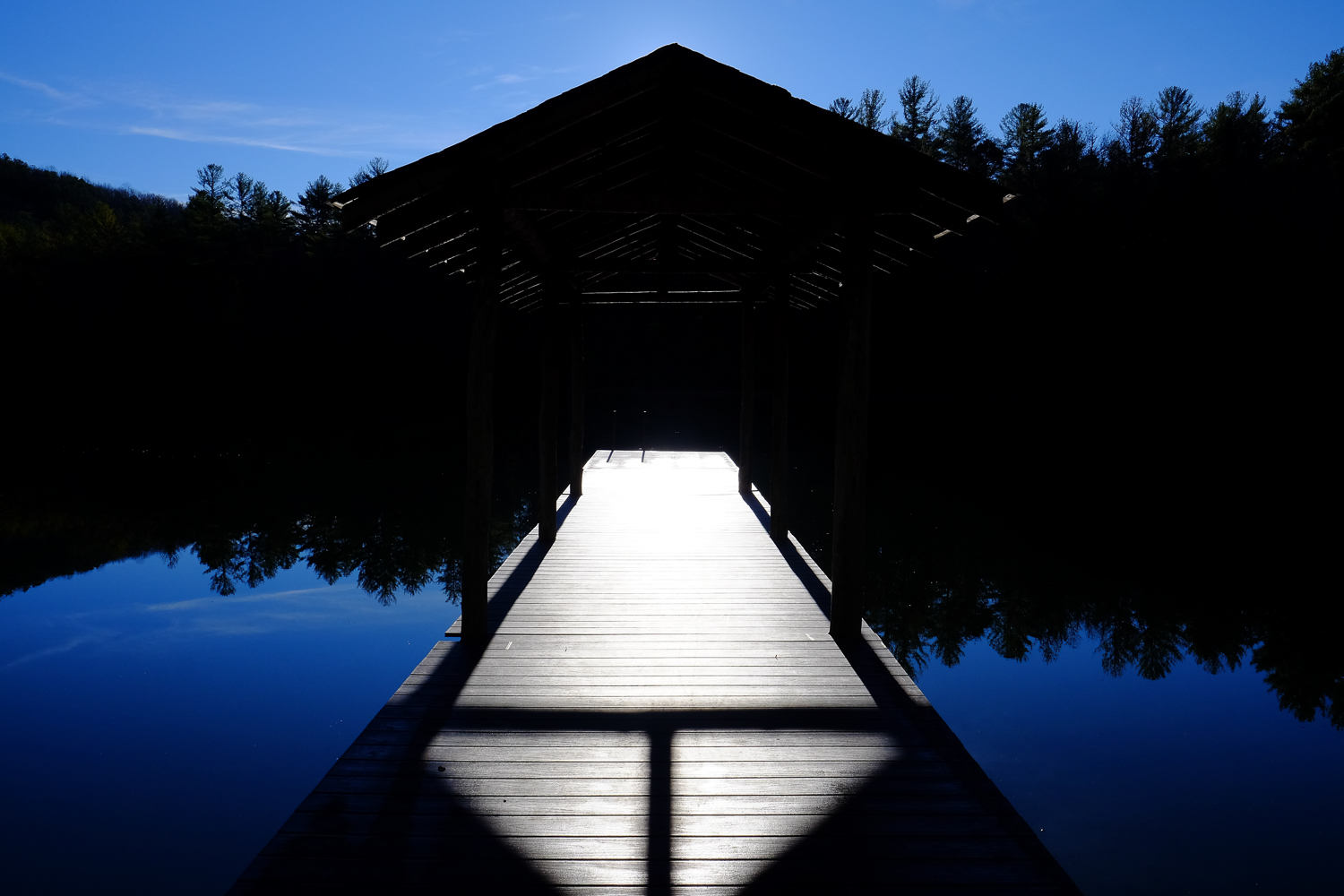 Bingo! I knew as soon as I framed up that image I was onto something special. There are times the photo doesn’t leap out at you until you see it on the computer screen, but this was one of the times I knew it immediately. I had a big grin on my face at this placid lake that I had entirely to myself. That’s a three-star (worthy of sharing).

I liked the way that the light traced the edges of the roof, so I dialed up the exposure a bit, and found myself a four-star (worth printing): 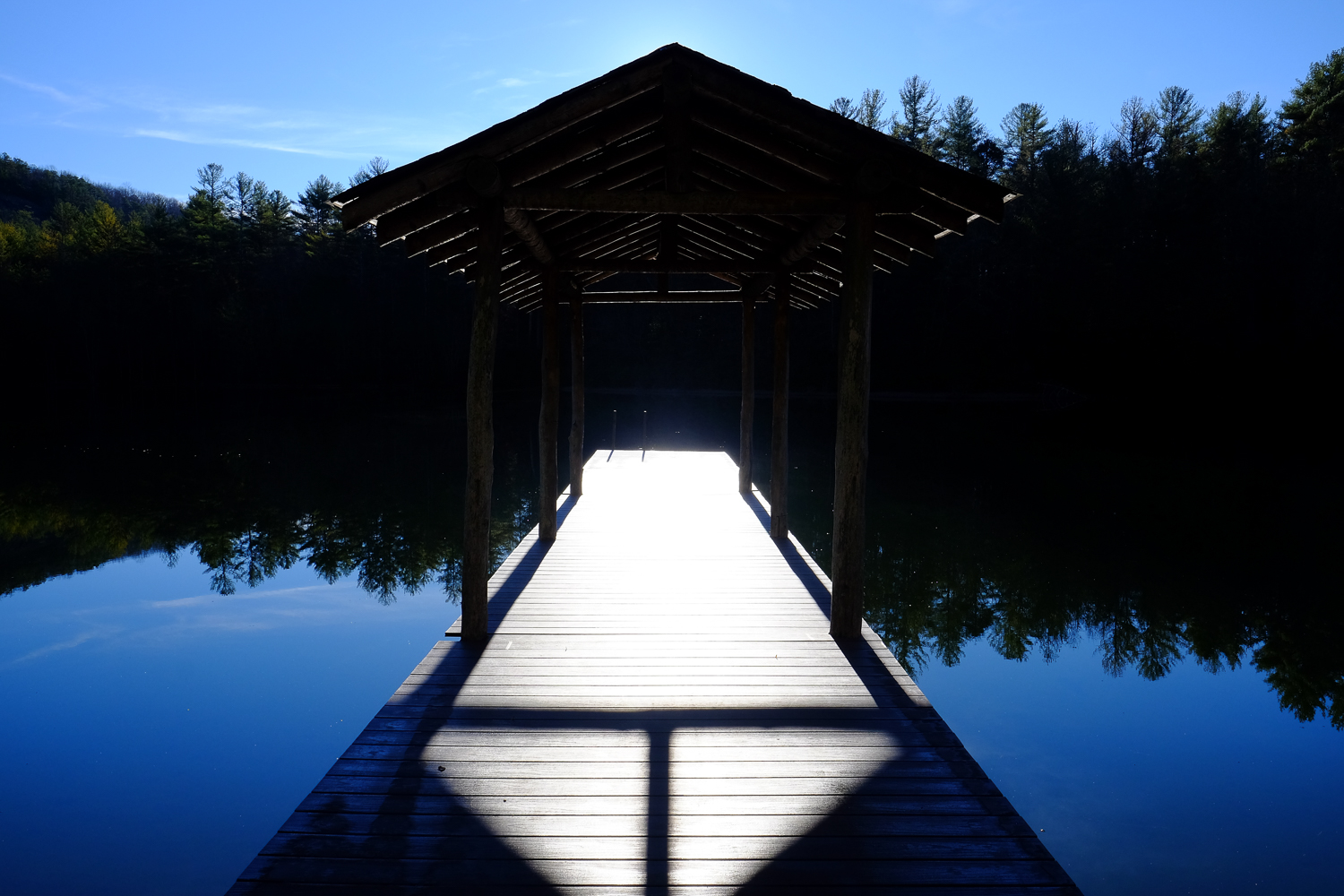 I captured a variety of exposure levels framed like this, and then knew what I had to do next: wait for the sun to creep up against the roof and use a small aperture to create a sunstar off the roof. Here’s the resulting five-star image in color and B&W: 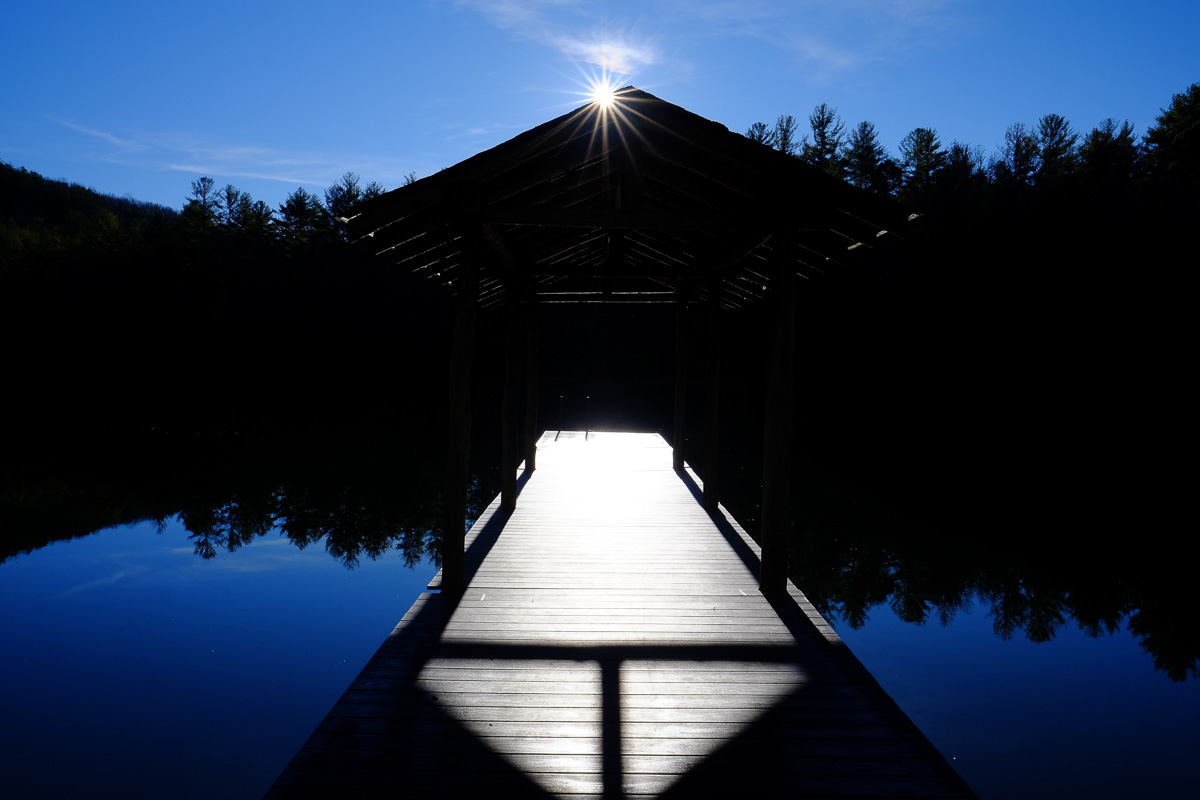 This is THE photo of this story 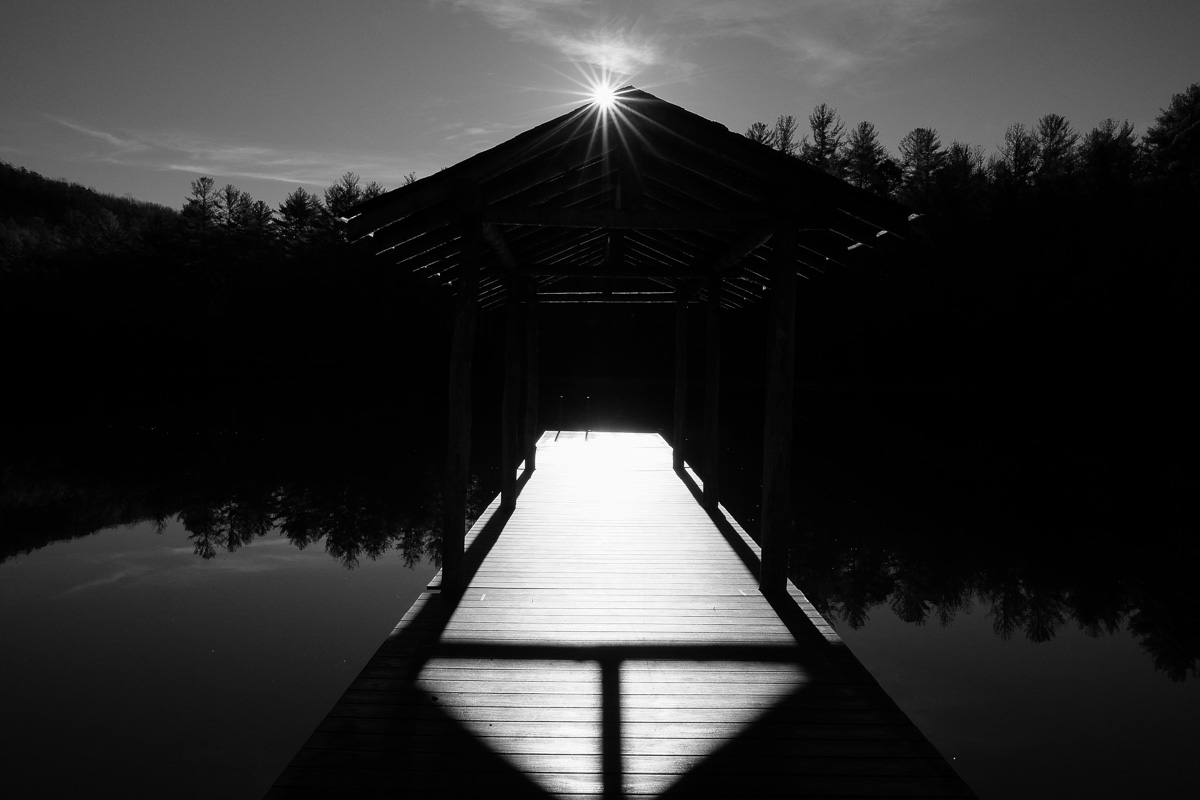 Okay, this one is too

I may have actually giggled – and I was certainly talking excitedly to myself all alone in the mountains. Behind the camera position, there’s a shelter with picnic tables, and I just sat and took in the wonder of this cold December morning. And then I did the least serene thing I could think of: I took my own picture, using the Fujifilm Remote app on my iPhone to trigger the shutter: 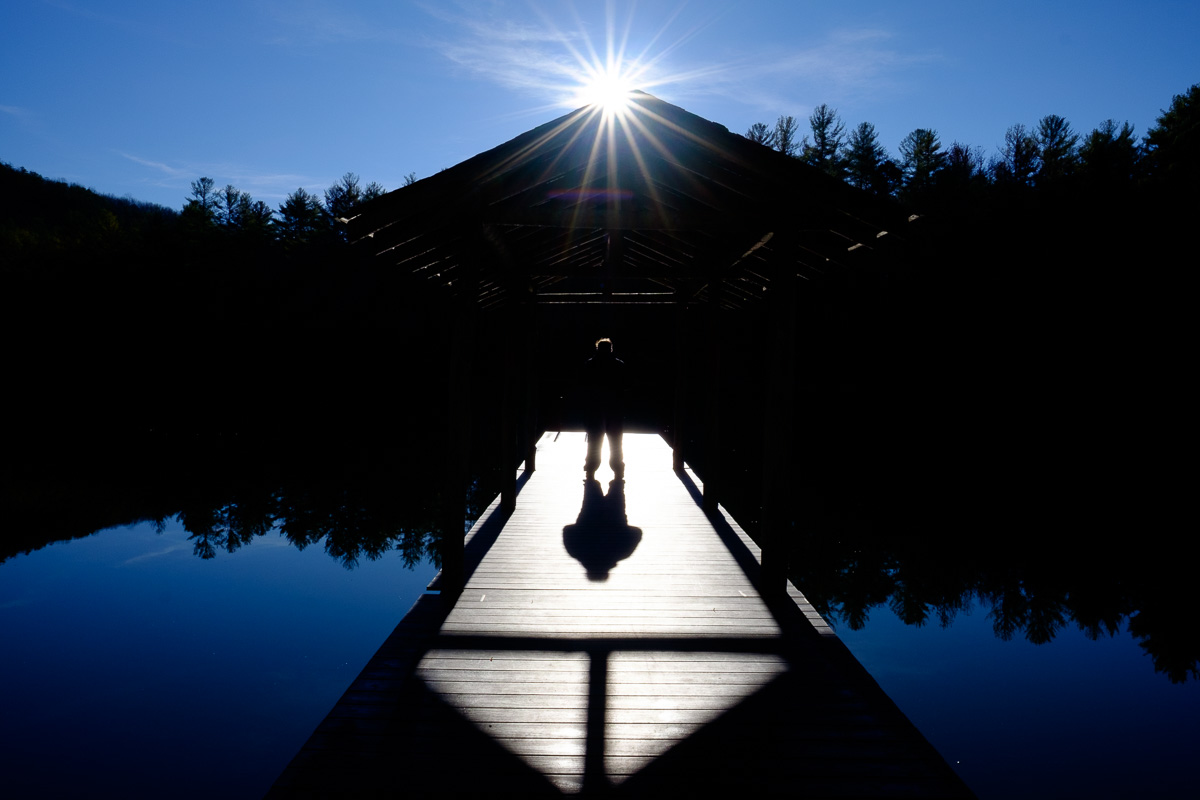 I wandered around the shore a bit and took a few more photos that give some context to where I’m standing. 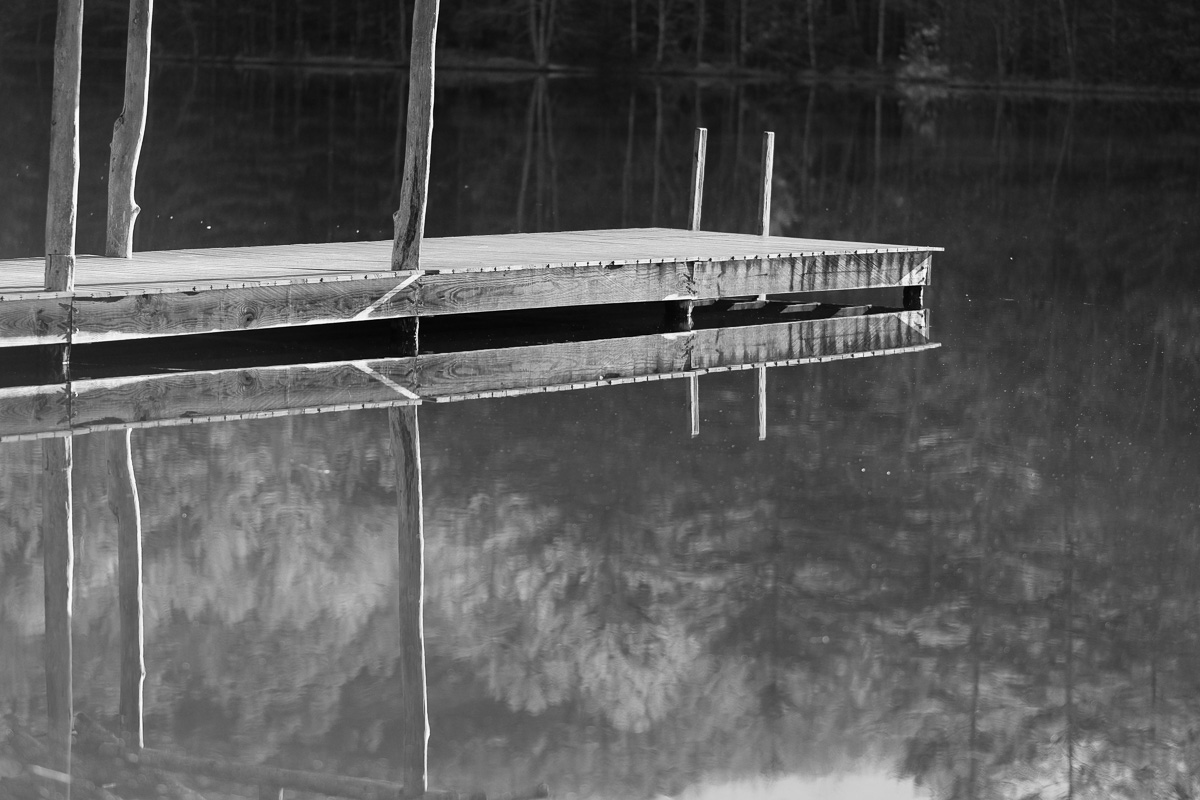 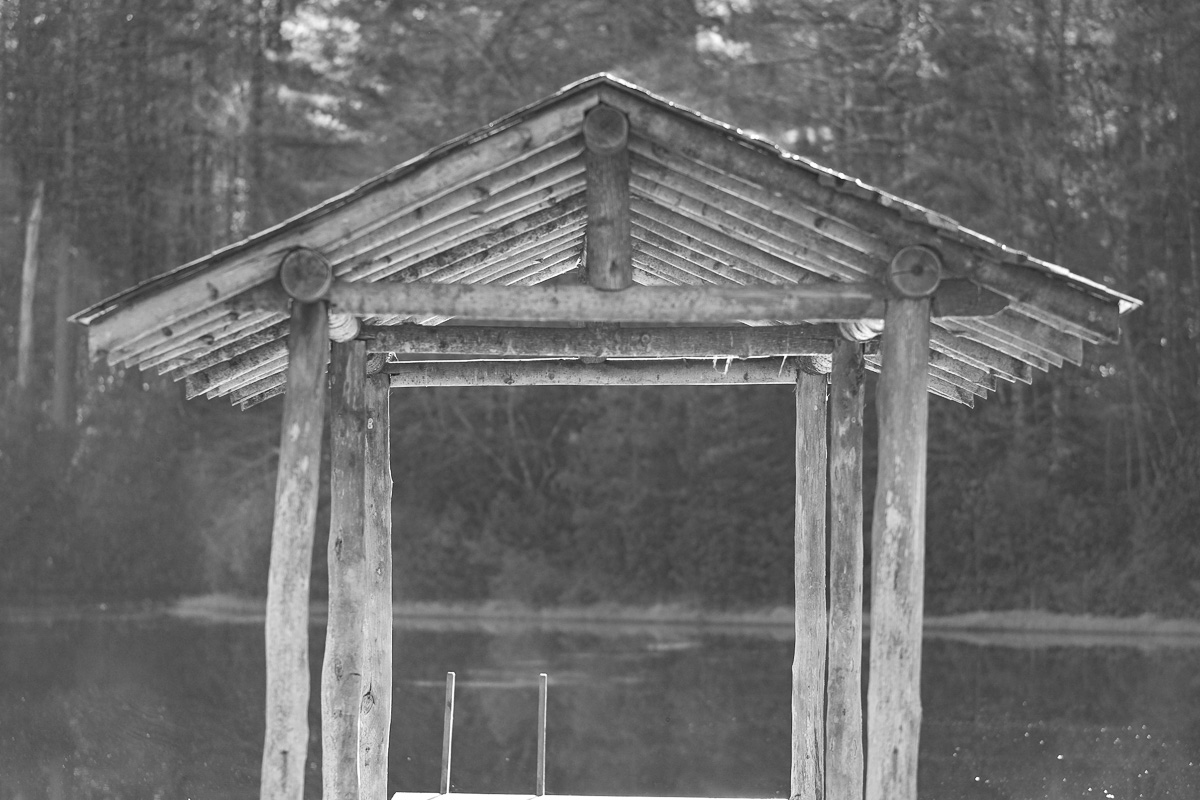 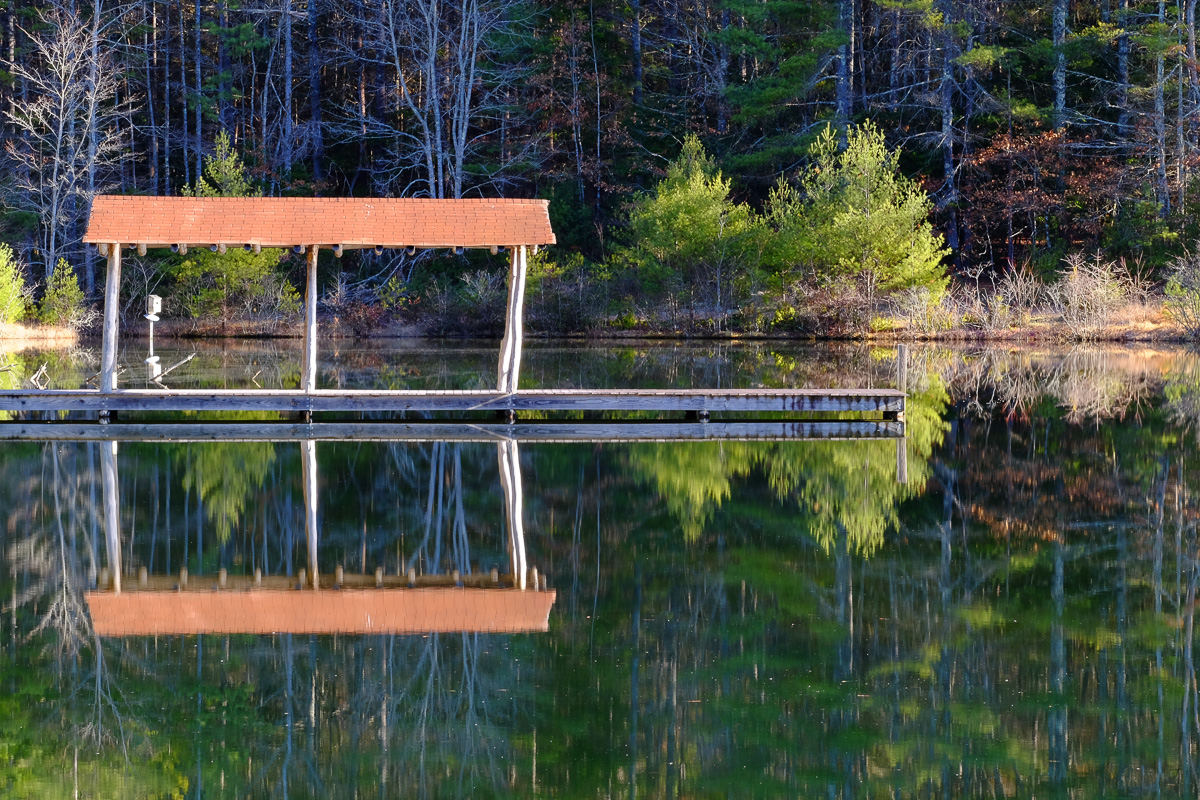 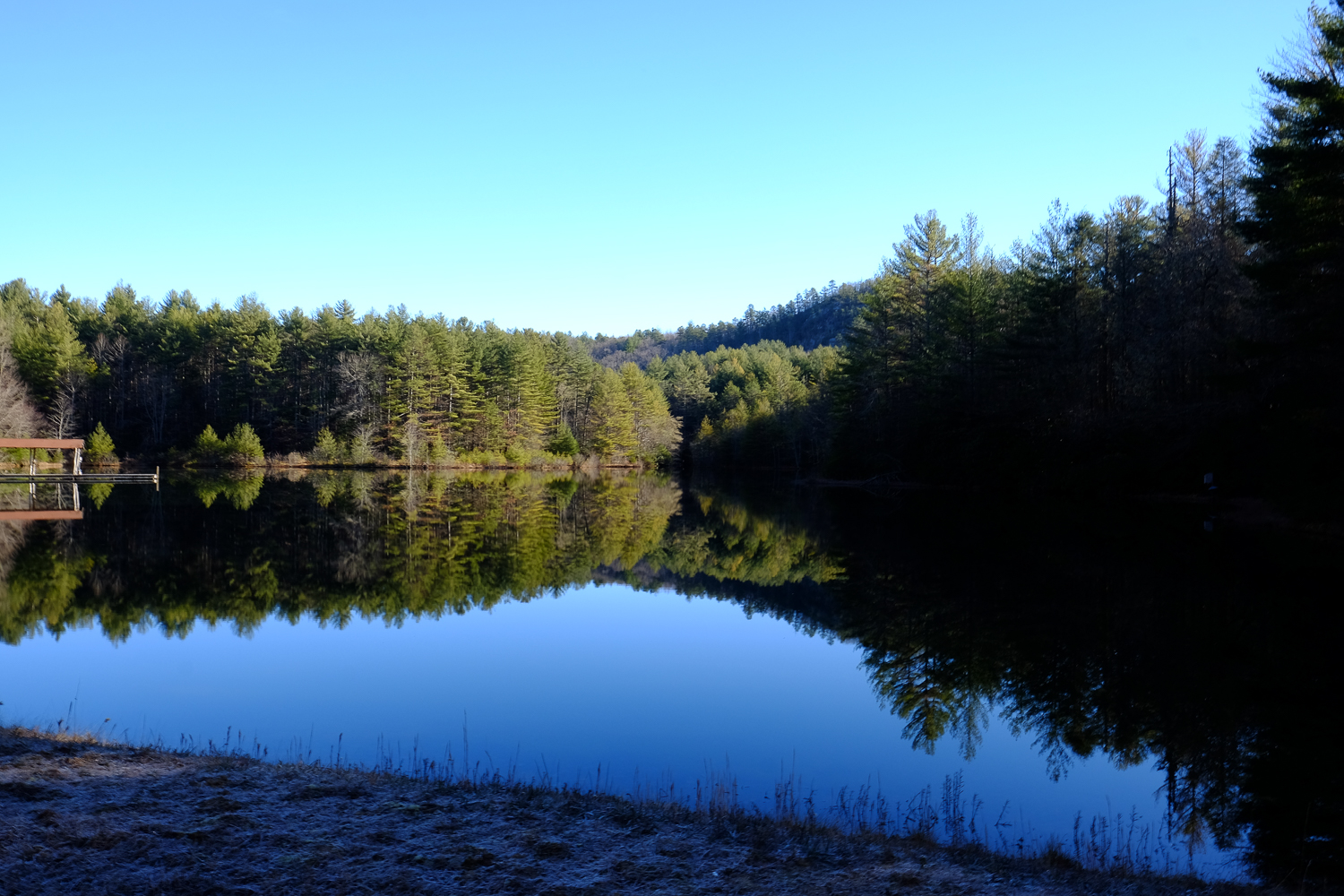 The rest may be a letdown

After shooting all along the shore with all the lenses I was carrying, and eating my whole snack bag, I finally packed up and hiked along the Three Lakes trail to Lake Alford (no pictures) and finally to Lake Julia. 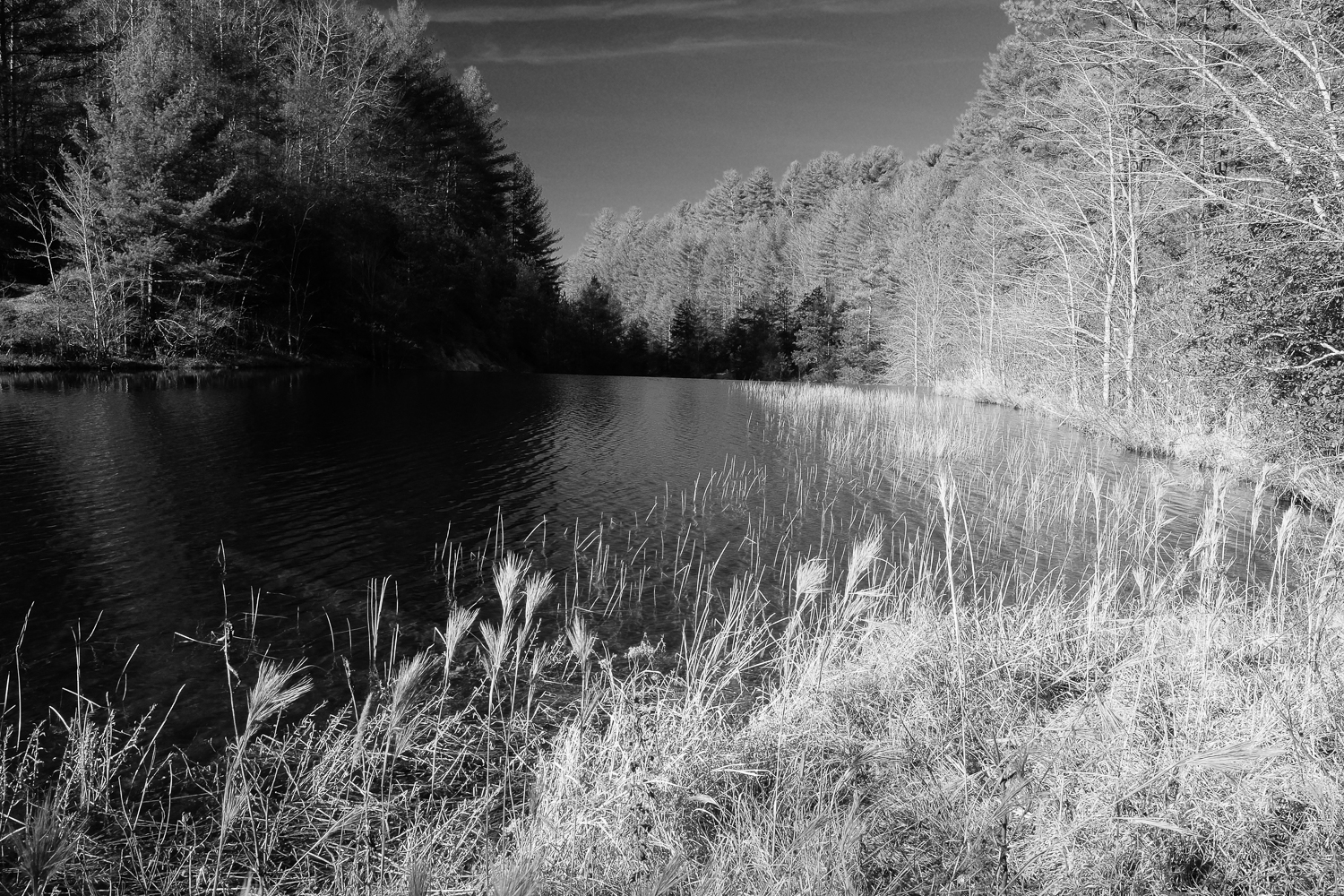 I then continued into new territory, turning down Lake Julia road to follow the distant shore of the lake. I came up a building of unknown ownership, but it had an amazing dock at the bottom of a long set of steps. Since no one shot at me, I went down and took some photos. 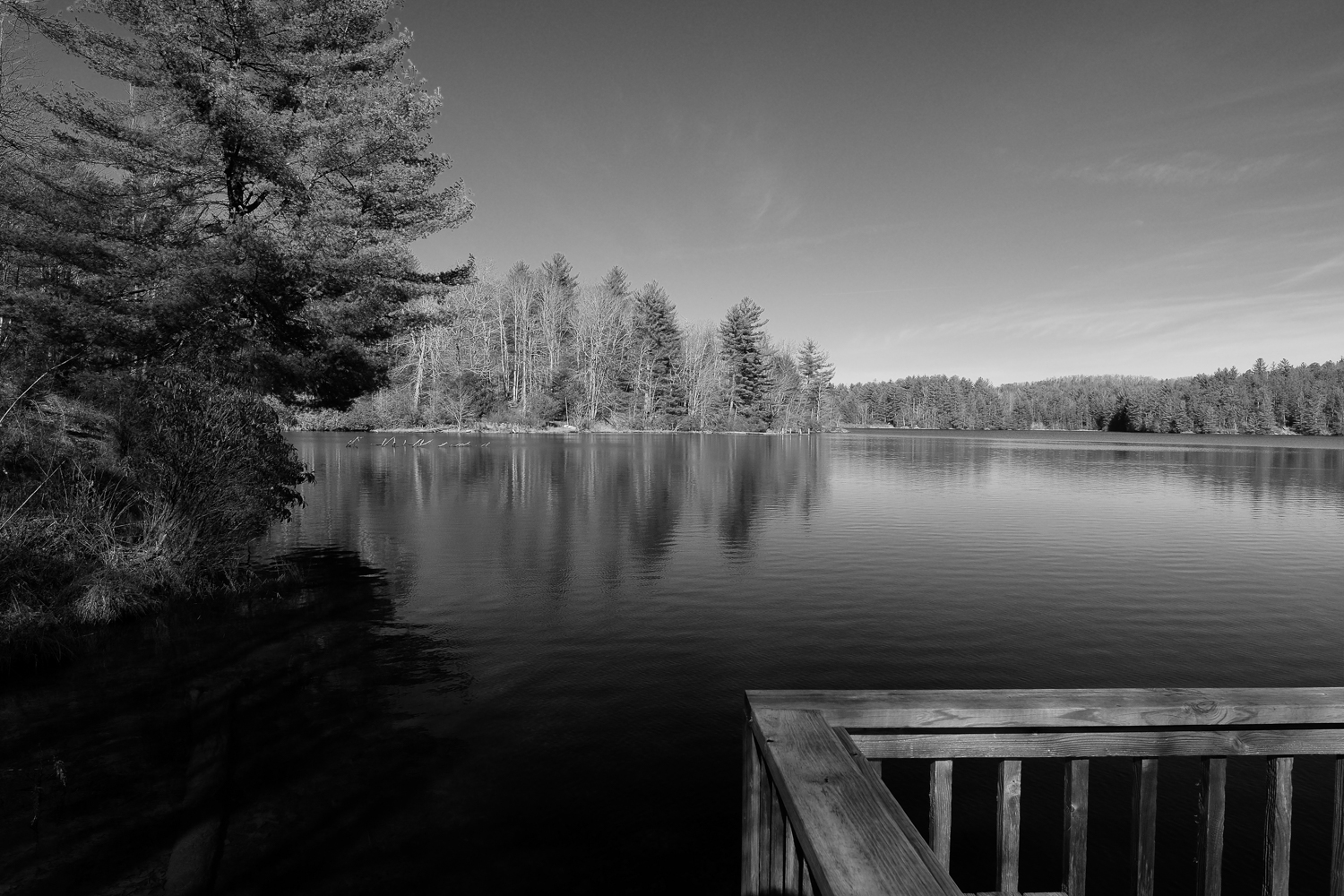 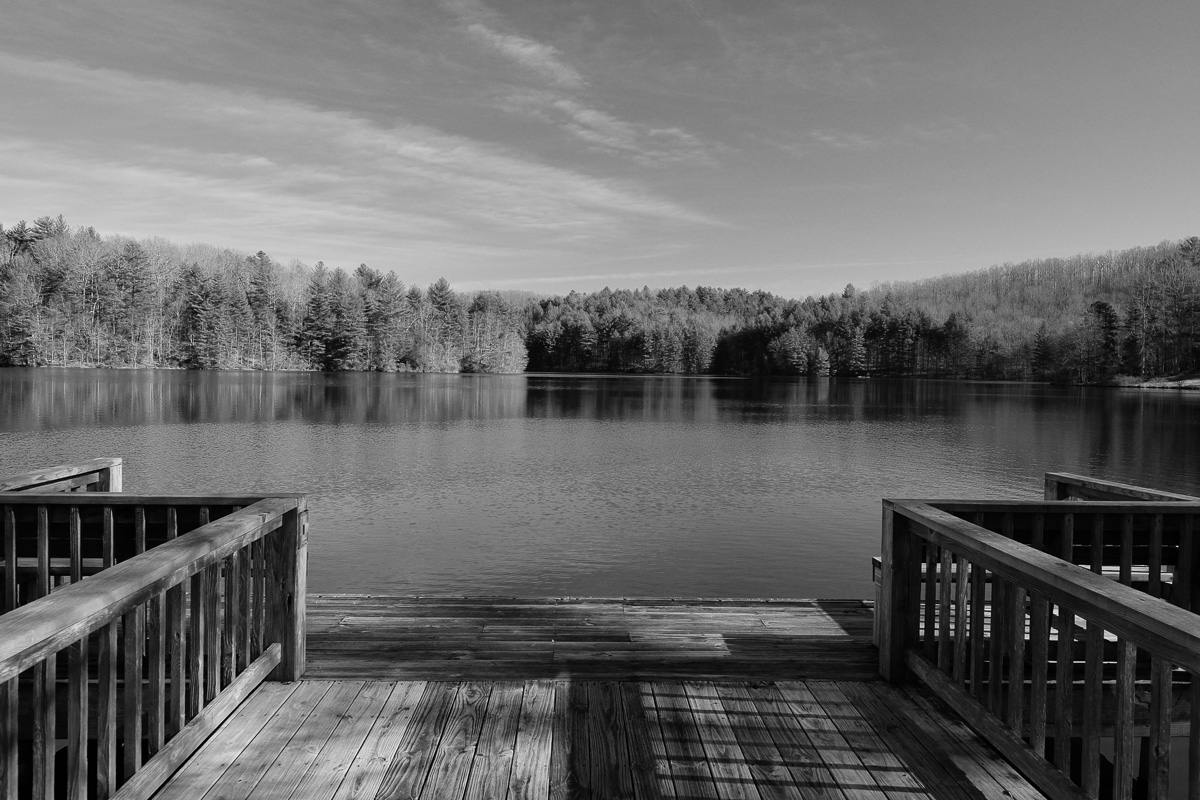 Just a breath of wind was spreading across the lake, and it created these patterns on the water, which looked almost like they were painted: 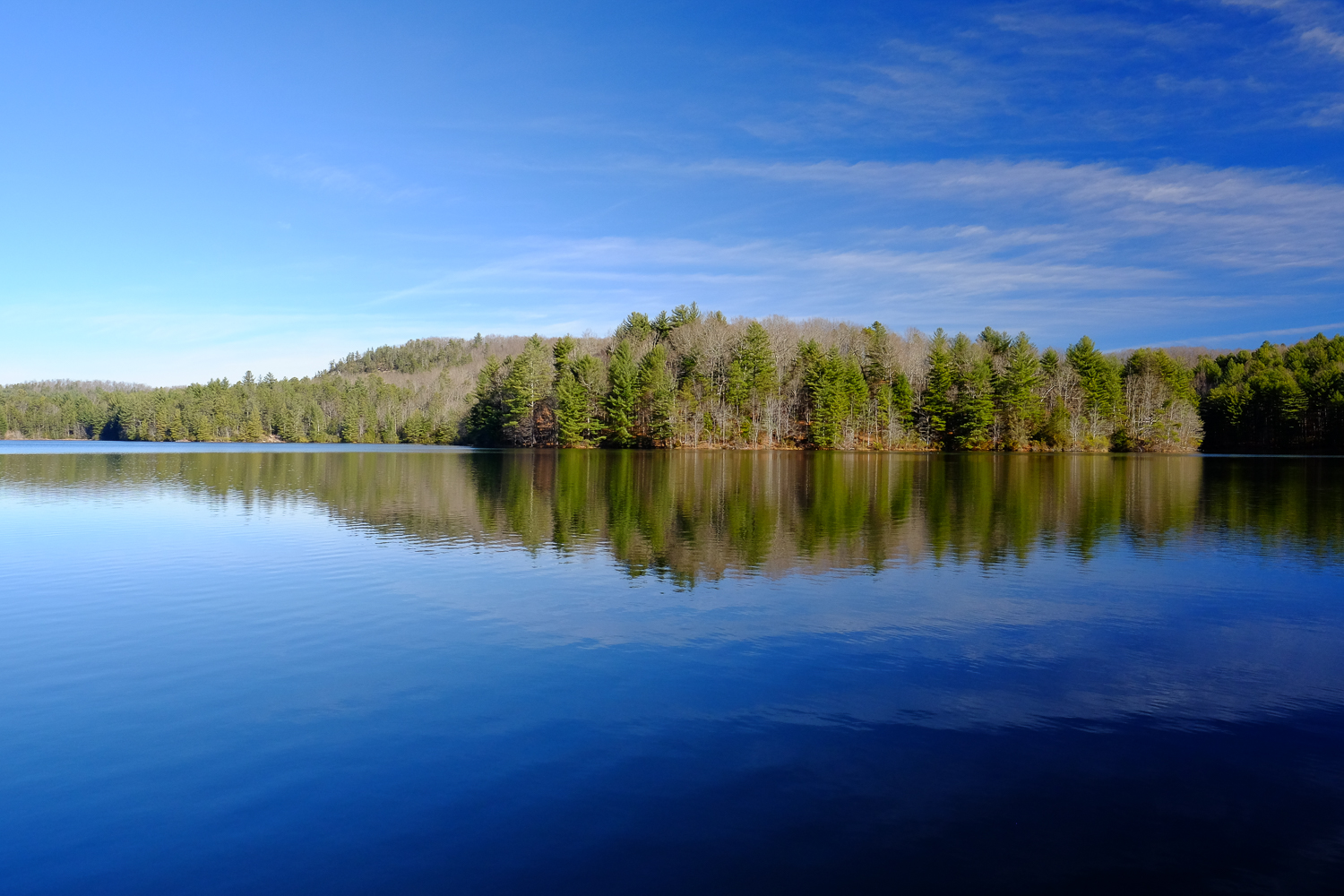 From there, I continued on down Lake Julia Road, and then circled the short but scenic Lake Loop Trail, which led me to this amazing boathouse nestled in a narrow arm of the lake with steep hills on either side of the water. 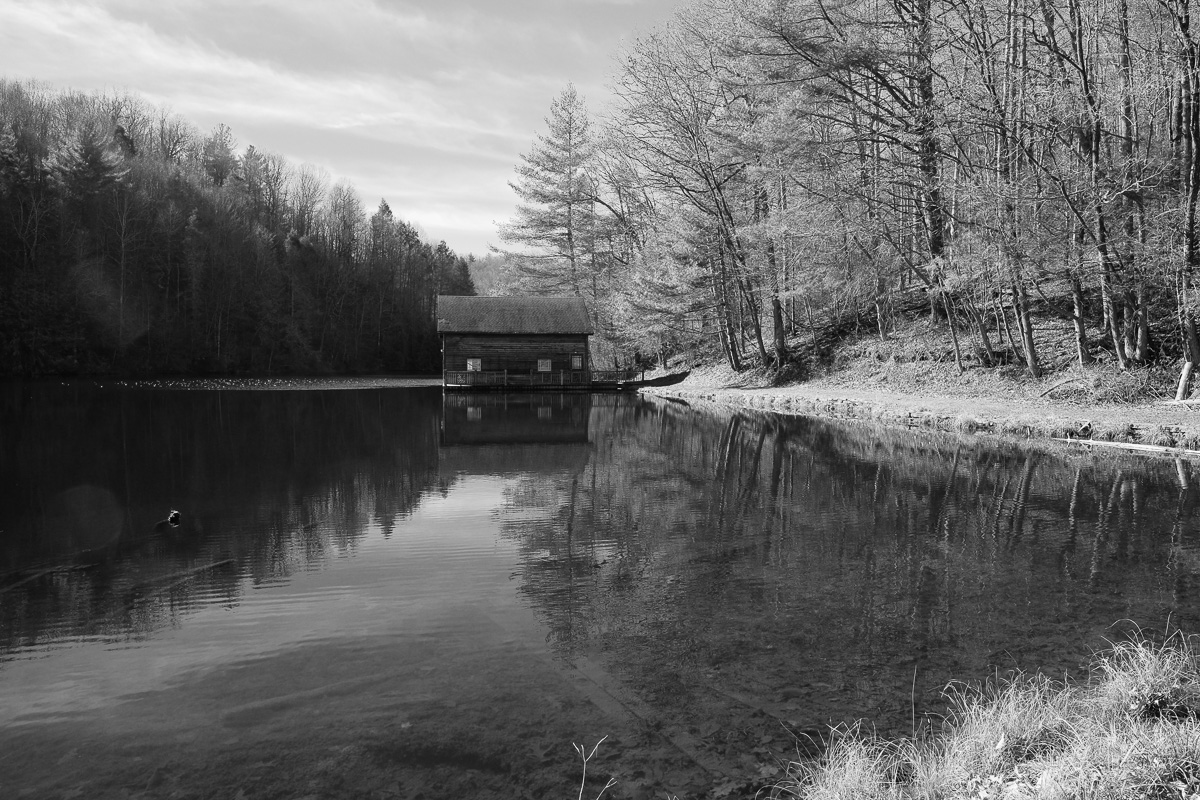 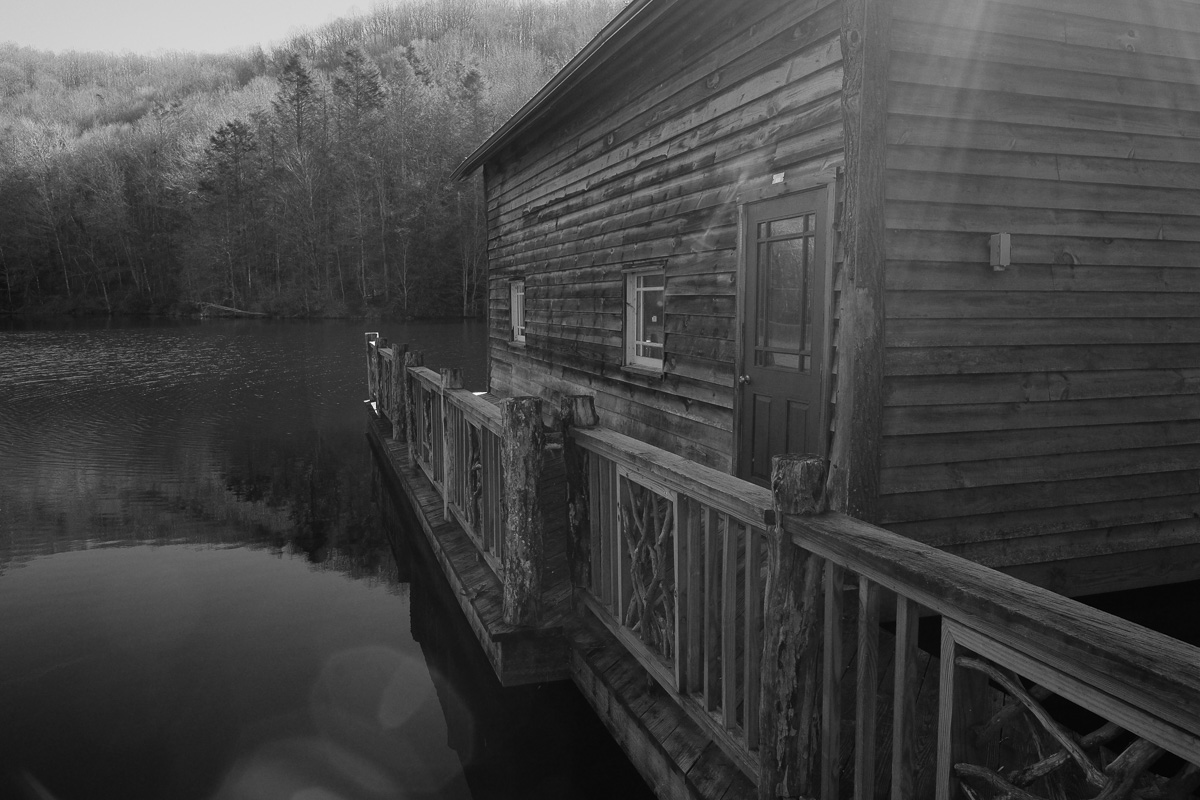 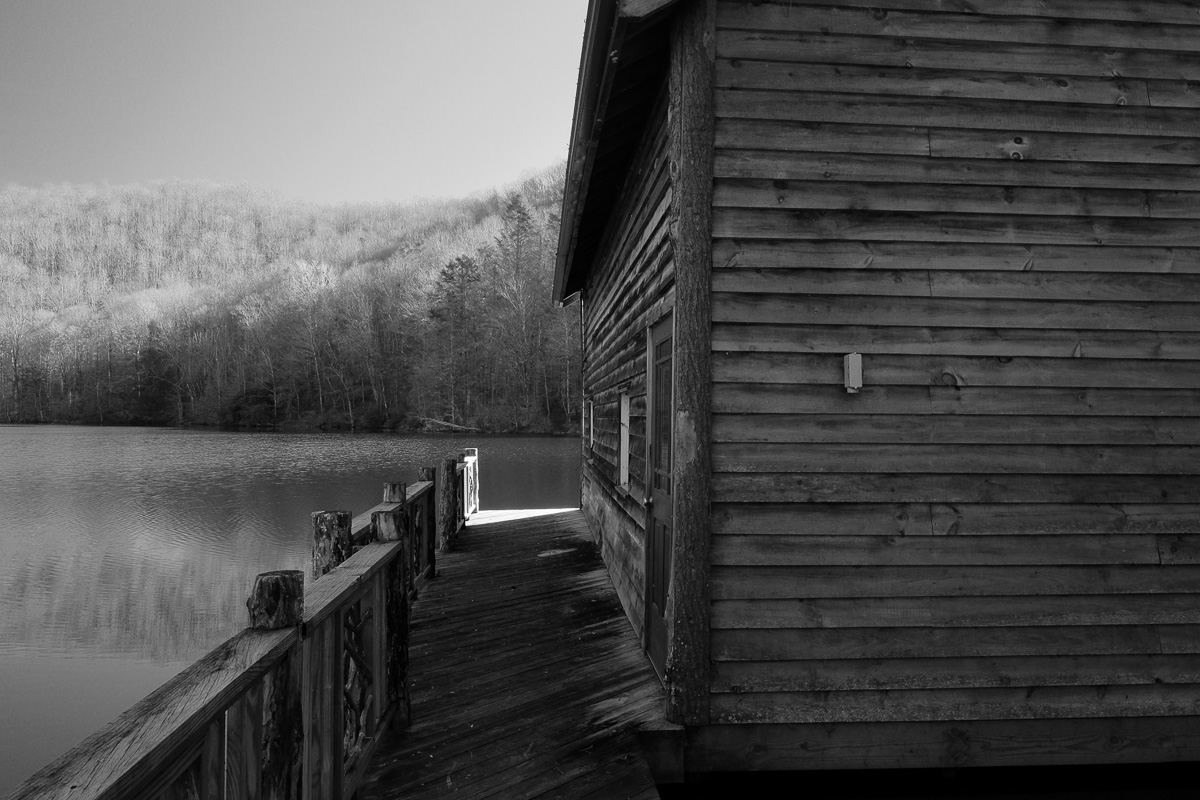 Wow, what a day it was. I’m exhausted writing it up more than 24 hours later.

And I’m already planning how I can get there earlier one of these mornings….