I have unfortunately strong powers of observation, which cause me to (occasionally) see things at more than face value, and (usually) to over analyze them. It’s a quirk, no doubt, and probably not to my credit, but it is what it is. Just a little background as warning that you may want to stop reading now, lest you venture into the neuroses of the author.

For half of you that read this, I need to provide further background, because the physical location of this tale plays a significant role, and half of you have never been there: the office men’s room. 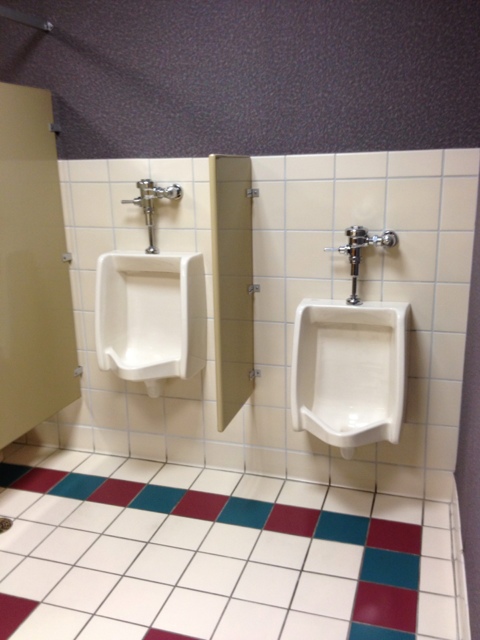 As you can see, there exists a divider between depositories, from approximately knee height to shoulder height, and extending out from the wall eighteen inches or so. I suppose conjecturing the purpose of this divider could warrant its own entire post – privacy, avoid the crossing of streams, etc – but we will just note its existence as part of the bathroom architect’s Grand Design, as I believe the divider is symbolic, intended to encourage men to recognize the need for quiet self-reflection while standing in this situation. It’s only fair to mention at this point that not all public men’s rooms have dividers between their urinals, so clearly the designer of this workplace bathroom intended its visitors to have a solemn personal experience with each visit.

Few among us are blessed of home enough to have a urinal among our 2.5 baths, so the workplace bathroom trip is special, and should be treated with an appropriate reverence. Just as the shoulder-to-shoulder stadium trough experience is something that men look forward to during the entire drive to the game.

With that out of the way, allow me to return to the topic at hand referenced in the title of this post. There are some men who do not share my view of the sanctity of the trinity, wherein a man should restrict his workplace urinal experience to himself alone among men. These “leaking lookers” not only want to initiate conversations over the divider panel, but they go so far as to even turn their heads to the side to identify their urineighbor, which clearly violates my “eyes forward” standard while using a urinal. I cannot discern any common traits among this crowd, neither in personality, seniority, age, nor economic standing.

Now, I have been told that I am an outgoing person, and I generally make eye contact and greet each person I pass in the hallways of the office, but once I enter the tiled world of the office men’s room, I become an eyes-to-the-floor introvert. This is not a place for me to converse. Should I occasion to enter a men’s room with a fellow male while we are already engaged in conversation, a side-by-side (still eyes forward, of course) continuation is permissible. Continuation yes, initiation no. Using the old “boy, this water’s cold”; “yeah, deep, too” two-person joke when entering a men’s room with a buddy, perfectly acceptable. Turning to your left to see who is standing next to you, not so much.

This is not a homophobic issue; please don’t misinterpret this as me implying that anyone is trying to get a glance at anyone else. Nor does this make me uncomfortable with its awkwardness. Rather, this is an issue similar to violating someone’s personal space by close-talking them after that third appletini; a serious abuse of social constructs. I urge you, fellow man: Do not violate the men’s room Trinity: the man, his [insert penis euphemism of choice], and the porcelain.

Ed note: I discussed this issue with a colleague recently who disagrees with my stance, and proudly admits that he is a head-turning leaking looker. Well, he didn’t use that exact moniker to describe himself, but he believes that the head turn is not only okay, but also to be encouraged. I have asked him to prepare a guest post response which I will post here. Additionally, in discussions of this issue with a female colleague, she said “you would not believe the zany stuff that goes on in the ladies room.” I requested a guest post on that as well, so look for a series of workplace bathroom posts, to continue the rich thought leadership tradition of this blog.

I also wish to note that this is not specific to my current place of work, there were a few turn-and-talkers at past jobs as well.