I left work on Monday around 5, and Karla was nice enough to walk me out to my car. After a few minutes of scraping windows, I was on my way home.

It was slow going on M-6 and then I-196, but thankfully there weren’t any accidents on the westbound side of the road, so I was making decent time considering the weather. After passing Hudsonville and nearing Zeeland, the visibility reduced as I headed down the hill towards the Zeeland exit. 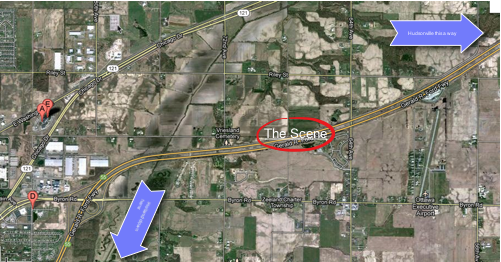 I stayed in the left lane as many cars moved into the right lane, preparing to take the Zeeland exit coming up at the bottom of the hill. At this point, visibility was pretty low – I couldn’t see much past two or three sets of taillights in front of me.

It was a man, wearing work boots. Yes, work boots. And nothing else. A completely naked adult male, standing in 9-degree weather (-10 wind chill), facing the freeway and swinging his shoulders side-to-side.

Oh, and there’s this little detail: not only was this man rotating his torso, he was manually pleasuring himself. At this point, my understanding of the braking in the right line gained some clarity.

Don’t worry, there is no photo re-enactment when you scroll down.

As I drove past, I started to think back if I had seen any cars on the shoulder that could have borne this man. There were none on the shoulder before or after, and it was still about a mile until the Zeeland exit.

My next thought: I should call 911! I started to do so, then quickly hit the “End” button, because the act of rehearsing what I would say to the dispatcher (likely harried because of the road conditions around the region) rendered me unable to speak: “Yes, hello, I want to report a naked man pleasuring himself on the shoulder of westbound I-196 at about mile 54, in the middle of a blizzard and bitter cold wind.” I can only imagine the silence that would have been the dispatcher’s response.

Instead, I pondered countless questions during the remaining 15 minutes of my commute: How long does it take to get frostbite with that kind of windchill? Why work boots and not bare feet? How did he get there? Why, why, why?

I assure you that this story is 100% true, and I have independent corroboration from another witness (Hi Rob!). I seriously think this might be the strangest thing I’ve ever seen. I’ve audited my memory of weird things, and I can’t find one to top it.