After I posted the apology to my parents, a couple people asked me about being hit by cars twice, and if that really happened? Once I got over the indignance generated by that assault on my character (What?! Are you implying that there is something other than factual reporting on my website?!), by drinking heavily with my psychologist of course, I realized that perhaps there is something worth telling in the tales of my two pedestrian-automobile incidents. This will, of course, be a two-part series; Part One commences henceforth.

I grew up in the Great Oaks neighborhood in Rochester, and attended MacGregor Elementary School from Kindergarden through third grade, whereupon we were “re-districted” to Long Meadow Elementary, though I’ve always suspected ulterior motives. I arrived in Mrs. Land’s Kindergarden class well-prepared, thanks to my time in preparatory school at The Red Barn Nursery School, which should not be confused with this Red Barn, which I occasionally drive by in Grand Rapids. I’m sure some variety of education occurs there, but I’m not sure if they have field trips, hayrides, and parent helpers? Circle time has an entirely different connotation here.

I moved on into first grade, where one of my classmates was a repeat-offending glue eater (you know who you are), and another sucked markers. The business end, not the cap end. As you might expect, his smile was always a surprise. Second grade passed into third grade, and now we are back closer to the topic of the day. I find this hard to believe now as the father of a kindergardner, but my friends and I walked the one mile from our houses to MacGregor by ourselves. Here was our route: 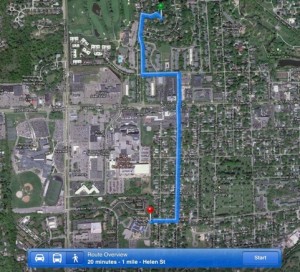 We were tough for third graders

That meant that we crossed University Drive each morning at an intersection that sees more than 17,000 cars per day. And that’s where we find our group of Great Oaks third-graders one foggy fall morning, at the Northwest corner of University and Helen.

It was foggy enough, at least as recounted later, that we could not clearly see the walk signal on the far side of the intersection. We were not smart enough to look at the walk signal right behind us, but it was also foggy enough that cars were having trouble seeing the traffic light, so our youthful tunnel vision wasn’t solely to blame for our decisions over the next few minutes.

We only had to get from here to there

Eyes locked to my left, I quickly passed the two westbound lanes without incident. Fear rose as I moved across the left-turn lane and passed the halfway point. As I swung my head around to the right, I saw the orange Mustang nearly upon me in the inside eastbound lane. 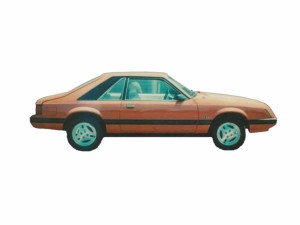 In a moment of sheer genius, I responded to the danger in the bravest way possible: I passed out. This turned out to work in my favor, as I was on the way down when the Mustang hit me at thirty miles an hour, and the pointy front end hit me square in the right hip, sparing my puny third-grader knee.

I, of course, do not remember the next period of time, but I am told that I cleared most of the intersection in flight before sliding to a grating halt in the opposite crosswalk. I do recall adults trying to keep me from standing up, which caused me to fall and hit my head on the blacktop a second time. If you ever thought about asking me “Did you eat a lot of paint chips as a kid?”, this is part of your answer. 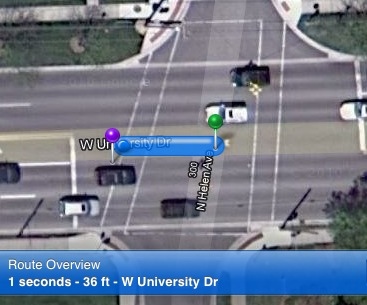 An ambulance arrived to take me on the 200-yard ride to Crittenton Hospital’s Emergency Room (I’m not kidding, Google says it’s a 15-second drive). Let’s see, $500 divided by 15 seconds, equals, oh, a lot. More on that in Part Two, there’s an interesting twist.

I believe my friends were eventually directed to complete the journey to school, or perhaps a police car delivered them to MacGregor. Perhaps one of them can chime in to fill in gaps or correct my recollection of the situation. [Update: See Jim’s notes below]

My mother arrived at the ER rather quickly, joined a bit later by my father who had already been on his way to work (he may have gotten to the office before being notified; this was before even “car phones” were around). My parents were expectedly concerned, but were not overly critical.

Another visitor to the ER, however, was not so kind. The middle-aged driver of the Mustang arrived after some time and was allowed in to see me, whereupon he unleashed a string of profanities, berating me for breaking his front license plate (they were required in Michigan back then, young people), and for generally scaring the crap out of him. He was quickly ushered out, and I never saw him again.

I was released from the hospital after a few hours, escaping with scrapes, bruises, and a concussion. My friends of course came to check on me after school, where they told me tales of my flight along University. We were allowed to walk to school even the next day, though two of our fathers joined us to make sure we could safely cross that busy intersection.

Update – Jim’s recollections of the day:

I remember this day vividly. To my recollection, it was just me and you. Maybe a few others were ahead of us. I was on the corner near St. John’s school when you got hit. I ran over to see you and one of the onlookers told me to run to school. I believe they thought we went to St. John’s, and didn’t realize I’d set a personal best running the next 1/2 mile on to MacGregor. When I got there, I saw Mr. Treas at the bus dropoff and told him what happened. Eventually, I got to class and Mrs. Shepard told the class what happened. I remember we all made cards for you, and mine involved Ted as Superman flying through the intersection.

My Mom came and picked me up and we went to the hospital to see you. Miraculously, you were fine. It’s amazing really. I remember hearing that apparently the cops looked up “Goudie” in the phone book to call your mom, and instead called your grandma to inform her that her son (your Dad) had been hit by a car. I also remember that once you got home, your Dad took me and you back to the intersection to overcome any fear and practice crossing (obviously, they were comfortable that this would never happen again!). One other point to note, looking at your route, I believe that with time, we shaved a good 10min off the walk by climbing over the wall in back of Lytle’s house.