How I got hit by a car. again.

Having survived my previous pedestrian encounter with a car, I continued walking to school until the completion of third grade, where a redistricting moved our neighborhood to a different school that was too far for walking, so I joined the bus brigades for the remaining three years of elementary school. I was also a bus rider for my 7th grade year at West Junior High, and my 8th grade year at West Middle School – things are always changing, aren’t they?

I entered Rochester High School as a freshman, and once again, returned to the ranks of the kids who were turned loose in the early morning darkness and supposed to find their own way to school without finding any trouble along the way. Trouble, find me? Never.

A bit of background (read: tangent)

One downside of living in Michigan is that we have this long cold season called Winter. Great for snowboarding, sledding, skiing, not so great for walking to school at 7am. Our crew generally found two ways to warm up along the exhausting 1-mile walk (uphill each way!) to school in the mornings. First, as you may have guessed if you’ve read my paper route post, is the routine inhalation of nicotine from lighted paper cylinders. Great Oaks Country Club happened to be a useful shortcut along our route from the G.O. to RHS, and near the sledding hill at the top of Hemlock is a series of landscaping steppes with pine trees (at least there used to be – that parking lot on the Google map was tennis courts back then). The low-hanging branches of the pines, along with the fact that these steppes were cut into the side of a hill (think: country club rice paddies), provided us a nice makeshift shelter from the wind, enemy of all who seek to light paper cylinders. This regular stop became fondly known as the “Butt Pile”, for obvious non-anatomical reasons. I feel it necessary to mention that our name for the place was not related to an anatomical “butt” – solely because 90% of our conversations at that age did relate to some portion of human anatomy.

Our second strategy for staying warm will perhaps strike you as a bit more surprising. The now-razed (damn you, BW3!) Great Oaks Mall featured small areas of bricks outside most of their entryways, and these bricks were heated during the winter months to help melt snow and ice. This mall was a pretty big deal in Rochester when it opened – I remember watching large helicopters installing the HVAC units on the roof, and we frequently used our hellion nature to skateboard throughout the mall on weekday afternoons, laughing as the mall security people made futile efforts to chase us. No Segways in those days, though we did once run into my grandmother on a noisy skate through the mall – a quick respectful hello and we were back off to our suburban mischief. Anyway, these brick areas weren’t just heated, they were superheated. Our downtown sidewalks and streets here in Holland Michigan are heated, so they melt snow and ice, but nothing like what they had at Great Oaks Mall. They didn’t just melt they snow, they evaporated it. Seriously, you stood on these bricks, and it was almost like being inside.

To summarize my ramblings thus far:

Allow me now to highlight our route from the G.O. to the RHS, in my usual butchered Google Map format: 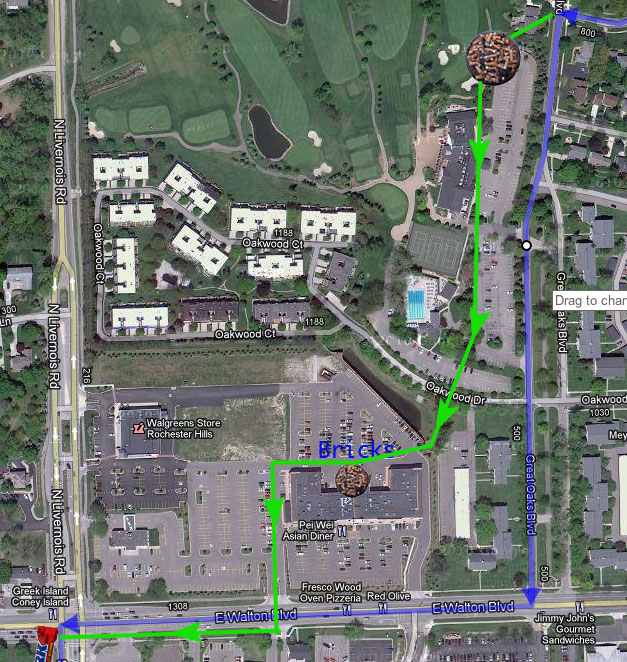 It’s interesting to note that I selected “Walking” as my method, and Google thinks I should walk right down the middle of Walton Blvd (the blue arrows are Google’s chosen path – I’ve added our actual path in green). Now, I’m not saying I haven’t done that, but I’m not sure that Google should be recommending that – you’re welcome for the tip, Sergey. I know you’ve been waiting for it, so here’s the location of our super-secret buttpile, previously known only to members of our little gang and the grounds crew who returned each spring to prepare the Country Club for play: 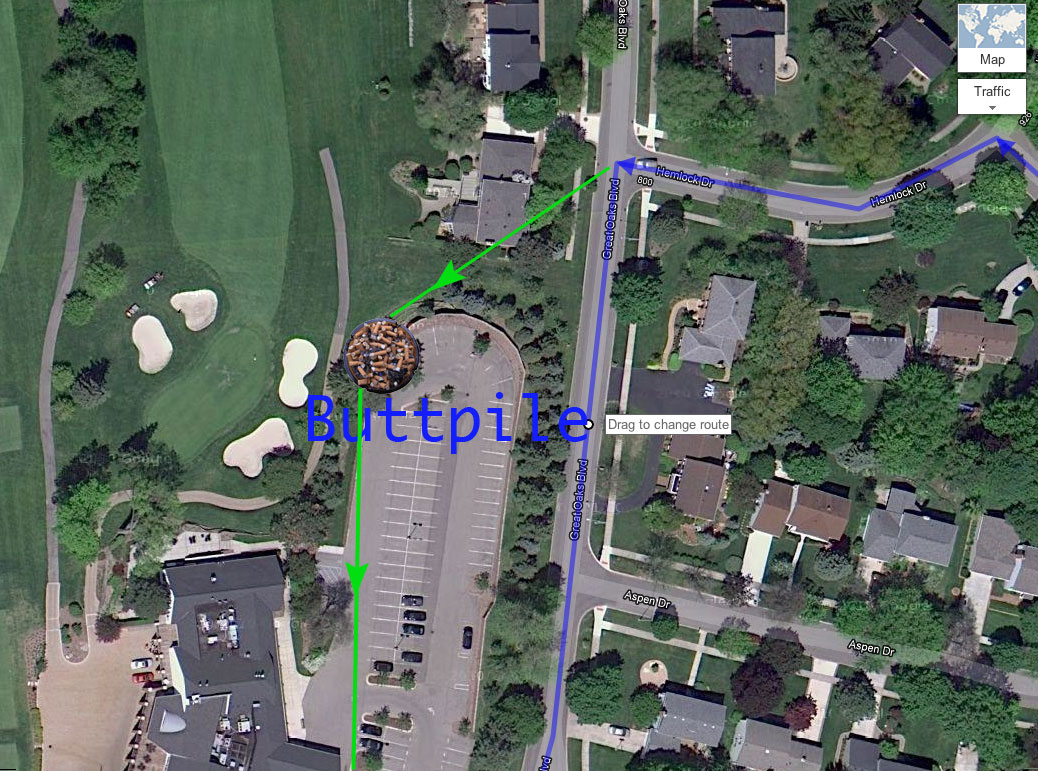 My maps are setting a new world standard

And, one more picture to acclimate you with the actual scene of my second car incident: 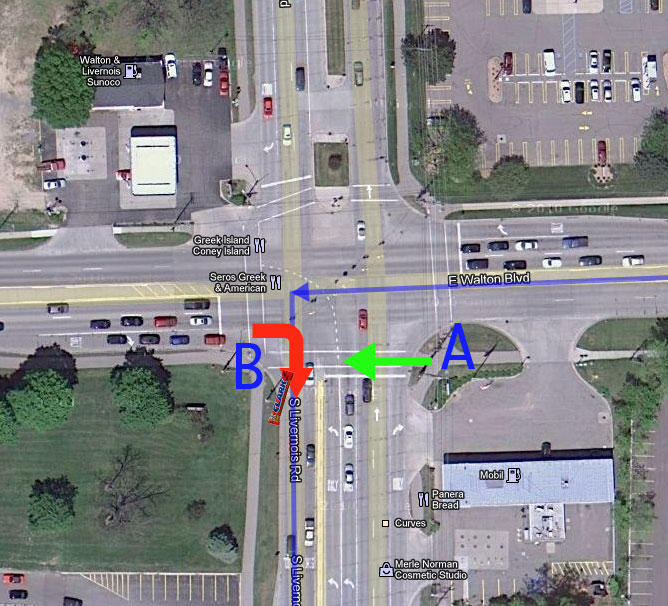 All you need to know about Livernois and Walton

Note the famous Kil Yoo Sunoco station in the top left corner – I love you man! Also, notice that Greek eateries are taking over the actual intersection, as there is one in the NW crosswalk and the eastbound left turn lane. Times sure have changed.

On this particular morning of December 1989 (I believe this was my sophomore year, not freshman year, but I could be wrong – I’ve taken a few hits to the head over the years), we felt the need to pick up a quick post-smoke snack, which was not unusual in and of itself. Luckily, this is the decade where gas stations became quikee marts, and the Mobil station on the southeast corner of Livernois and Walton would do just fine. We headed into Mobil where I bought a Clark bar (perhaps the most notorious Clark bar in Rochester history), and then we headed out to cross Livernois and go into school. All we had to do was make it from A to B:

We crossed with the walk signal, unlike my previous accident, where we had no idea what the signal said (we are the green arrow in the picture above). This was a clear morning, no fog, rain, sleet or any other precipitation to cloud our visibility. Or anyone else’s, as we shall soon see. I believe there were five or six of us in the pack that crossed the street that day, and I was near the back of the group, but not a straggler. My Clark bar was in mid-consumption as we approached the far side of the intersection.

All of our heads whipped to the right to see a late-model red (?) small hatchback turning right from eastbound Walton onto southbound Livernois, and not yielding for the pack of pedestrians that included me (his path is the red arrow in the picture above). Being towards the back of the group, I was at a decided disadvantage in removing myself from the path of the non-yielding right turner. We all jumped in an attempt to clear the street and land in the snowy grass to avoid the car; I left the ground before he got me, but he got me. Aloft, I was struck on the outside of my right knee, which was shoved into the back of my left knee with enough force to leave a huge bruise – from my own right kneecap.

I did a few flips in the air before my head located the raised concrete curb and identified it (wrongly, as it turns out) as an ideal landing place. My head was the first part of me to land, so the curb and my head took the full weight of my body as I once again lost to gravity. I was immediately knocked out, but came to quite quickly and was standing up before any adults even arrived on scene. At that point, instincts took over, and I handed off my cigarette pack to one of my friends – so it would not be discovered in the impending ambulance ride or trip to the hospital. I believe the quote I am credited with (now legendary, of course) is “Somebody take my smokes” and indeed, a brave and willing friend took my pack of Newports and stashed them in their own pocket. KMS – I owe ya one.

At this point, the driver of the car appeared, having pulled over and walked over to check on the pack of boys he had just mowed down. If memory serves, he was a few years older than we were, and was on his way to the alternative high school, or work study, or something similar. Our conversation went like this:

Boom, I’m passed out cold in the snow. I remember nothing from that point until I was in the ambulance, although that could not have taken very long, since I have a tendency to get hit by cars within 500 yards of the hospital (more on that in a minute). Again, my parents come to the hospital, I go home that day with a nasty concussion and a lovely bruise, and before long, I’m walking to school again.

The real victim (and star, as it turns out) of this story is the half-eaten Clark bar. As I made my (unsuccessful) leap to safety, the Clark bar made a flight of its own, its wrapper re-closing instinctively before coming to rest in the snowbank next to the intersection. That Clark bar became the hit of the retelling of my getting whacked by a car, and by the next day, everyone would laugh and point at the Clark bar anytime they passed that intersection. The Clark bar remained in that spot until sometime in the early spring, and was the subject of many jokes, honked horns, and shouted Clark bar greetings.

There was another public impact of my getting hit that day. A few weeks later, an activist mom (not mine nor any of our group) appealed to the Rochester city council that this intersection was too dangerous, and cited my story as a reason to outlaw right turn on red at Livernois and Walton, which got approved in short order. One problem though – the guy who hit me was not turning right on red, he had a green light, but failed to yield to the pedestrians rightly crossing with the walk signal. Funny how stuff like that happens – she’s probably heading up Occupy Rochester today.

If you recall from my last post, my ambulance ride was $500 and 0.1 miles (pictured above). Well, the intersection in this second event is exactly the same distance from the hospital, on the same street, but in the opposite direction. So I once again had a 0.1 mile ambulance ride that cost more than $500 (inflation and all that). I know, I know, you’re disappointed in me that I don’t get my money’s worth of emergency medical transportation; I am too. Interestingly, almost exactly two years later, I started dating the girl whose father owned the ambulance company that transported me on both occasions, so I guess our payments didn’t go to waste – they probably bought me pizza once or twice. That’s the power of karma at work.

My parents recently gave me a box of “my” stuff that covered a lot of my childhood. Among them were two articles from local Rochester papers covering my special event: 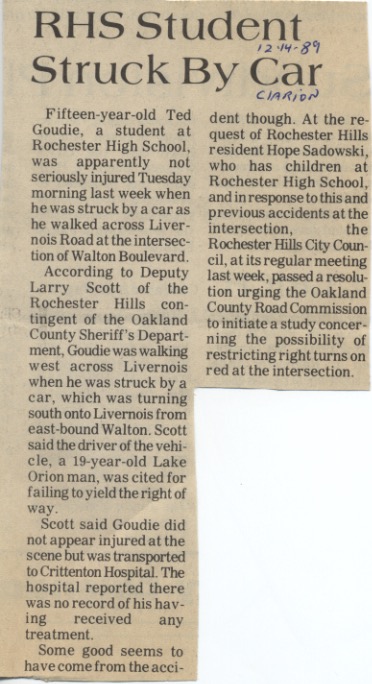