I used to be a big fan of Best Buy. Seriously, I was. Their stores were well-organized, the shelves were full, and the salespeople were both knowledgeable and friendly. I actually paid to be a member of RewardZone in the early days. Now RewardZone points are worth hardly anything – just like Best Buy’s customer service.

In December 2011, we ordered an Xbox Kinect Combo and three additional games as a family Christmas present. The three games were purchased on a  “Buy Two, Get One Free” promotion. Some of the order was available for in-store pickup, and some had to be shipped. We bought early, so that was no problem.

A day or so later, I get an email from Best Buy saying that one of the video games I ordered for in-store pickup is not actually available in the store. They asked that I call them (okay, I guess I’ll take  400 hours to call a retailer during December) to check availability.

Couldn’t you just check the availability and figure out how to get it to me?

Dutiful idiot that I occasionally am, I called Best Buy, waited ten minutes for a representative, and

[wait a minute, we need a sidebar here] When you call Best Buy’s ecommerce customer service, you land at an operator who wants to know what category of product you purchased. This is totally dumbass. First off, to a consumer, I don’t know what your internal taxonomy nomenclature is. When I told the operator “Xbox 360 Game”, she responded with “What’s that?”; this happened on each of my half-dozen calls about this order. Secondly, WTF difference does it make which category I ordered from, and what about if I ordered from multiple categories? How will you handle that, geniuses?

she told me that there were no stores near me that had this game in stock, but they had it available to ship and I should get it in plenty of time for Christmas. She volunteered this information, I did not ask. Note the date of 12/18/11.

My next communication from BB about this order comes on 12/23/11: 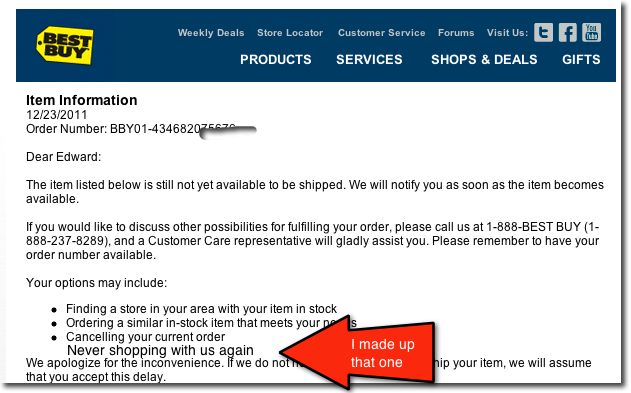 They’re getting better at this. Wait, no they’re not.

So of course I call them again (“What’s that?”) and they say it will ship, but not until after Christmas, and they offer me a $20 gift card as compensation, which I should have within a week. Groovy with me. The game ships on 12/26/11 and our house is filled with people throwing virtual balls to virtual tiger cubs.

Of course, after a week, I have no gift card. I call, jump through hoops again, and after 20 minutes on the phone, I am told that they can see the gift card order, but it has not been processed because they don’t have a shipping address for me. Which I find interesting, because:

Needless to say, I told the guy that his system sucked, he commiserated and promised I’d have my gift card in a few days. Predictably (see this great article for more examples of Best Buy abandoning customer service as a concept), I hear nothing and end up having to place another 20-minute phone call.

This time, I receive a new excuse why my gift card has not been issued: the game that was delayed was actually free as part of the “Buy 2, Get 1” promotion. I actually had a loud evil laugh when she read me that note, and instantly thought of ways I could get back at them. Their doorways seem kind of wide to pull the flaming bag of poop trick, so I gave up and waited for the gift card, which was now promised to arrive the very next day via email.

As of 1/18/12, of course, I had heard nothing. The pursuant phone call topped out at 27 minutes, during which the BB person cursed their systems and customer service reps several times. Which puts her about 2,244 behind me. She, however, decided to take initiative and fix the situation by doing a complete end-run around their stupid systems and just crediting $20 back to my card, lol:

Part of this email may have been altered.

What I really love about this is how it clearly shows my value to Best Buy as a customer. At least twice, people decided that I did not deserve the credit THEY OFFERED ME, and their way of letting me know about it was to not tell me about it. Very effective.

I was reminded of this December story today. Having a wonderful dinner at On The Border in Grandville, MI, I suggested to Mrs Ted that maybe we could wander over to Best Buy and ogle the new MacBook Pro Retina models so that we could continue arguing about which of us is getting one. Unsure of whether BB would have this new model yet, I rang them up on my cellular telephone and submitted this inquiry:

I’m checking to see if you have the new Retina Display MacBook Pro’s on display in the store?

I was told that they did indeed have this model on display and I could come see it. The Mrs and I drove our cars over to the store, headed over to their Apple mini-store (it’s a table!) and instantly deduced that said model was not on display. The twelve year-old boy working the Apple area asked if we needed help, and I asked to see the new retina display MBP. He said “It’s this one here” and pointed to a current-generation 17″ MBP. I pointed out to him that this was not the retina display model, obvious because it had the optical drive, lol.

He replied with “OOOOOOhhhhhh, the new Retina Display model, yes, we have those, but we don’t have them on display yet because we don’t have space on the table.”

Me [while rolling eyes]: “Before I came over, I called and very specifically asked if this was on display, and they told me it was. Are you telling me that you have these in stock and I cannot see it, touch it, or buy it, because you don’t have space on the table?”

Best Buy, that is utter horseshit. I came in looking to see (and possibly buy) a $2,200 computer, and even took the time to confirm I could see it before making the trip to the store. I was given erroneous information over the phone, and then Lil’ Stevie unapologetically won’t let me buy or even see it.

I keep telling myself that I will never do business with Best Buy again, and this time, I’ll probably stick to that. It’s a shame to see what has become of that franchise. Certainly their model has had to change as media moved to digital delivery and Amazon/eBay brought efficiencies to the market that put downward pressure on prices. However, Best Buy had an opportunity to bring value through people and service (Zappos sells shoes like crazy, and shoes are even more of a commodity than cameras), but instead chose to staff their stores with few actual employees, leaving the sales floor filled with people whoring Sprint, Uverse, Dish Network and everything else. I imagine that soon the ShawWow! guy will be doing presentations in BB stores, they’ll have HoveRound chairs and Sam Bernstein sponsored service areas.

As somebody who spent a couple years managing a media store in a big chain in the days before digital media delivery, it saddens me to watch BB. At the same time, they’re completely screwing this up themselves and seem to find ways to piss people off at every turn, so I don’t feel the least bit of pity for them. What were once my Best Buy dollars are now Amazon dollars.