We made it to the airport in decent time for our noon-ish flight out of Grand Rapids on AirTran – a familiar routine for our little clan. We got checked in for our flight and breezed through security, grabbed some food and then waited at the gate for our group to be called for boarding. We were called and made our way down the jet bridge as we have dozens of times before. Right before boarding the plane, Leah tensed up, started screaming and kicking, trying to get away and avoid getting on the plane. We made our way back to our seats at which point Aly turned to Leah and angrily said “SHUT UP!” which none of us had ever heard her say before, and drew some choice words and angry looks from Rachel and I.

In the 3×2 seating configuration, we had the three side and I had the aisle of the two-side across from them and we shoved the girls into their seats to let people pass into the rows behind us. Leah is still screaming and kicking Rachel like crazy for reasons unknown, and Aly has decided that it would be helpful if she responds by hitting Leah, which, again, is something we have not seen her do. Ever. So our two seasoned traveling kids:

Here’s the good news. It never got better, for the entire flight. Okay, maybe that’s not really good news. Certainly it wasn’t for the people on the plane around us. I have no idea what came over our children on this day, but it was enough to completely quell any talk of summer travel this year, despite the fact that we fly all the time – that’s how spooked we were.

Further evidence: before kids, we flew even more, and we were stuck on planes with crying/screaming/kicking kids all the time. Parents always apologized, and we were always like, it’s no big deal, we’re not sure why you’re apologizing. Well, this time, not only were people saying things to us at the baggage claim (“Oh, you got her calmed down now, huh?”), someone even said something to us in the parking garage when we were picking out our rental car! This had to be an hour after getting off the plane, in gigantic MCO airport, and Leah had left that much of an impression on people. Sorry, Colorado and Maine, you won’t be seeing us this summer.

Anyway, the reason we’re in Florida

is because Maggie is six! We arrived at the lovely Oyster Cay rental house to find the other two Goudie families were already in residence and had made themselves at home poolside: 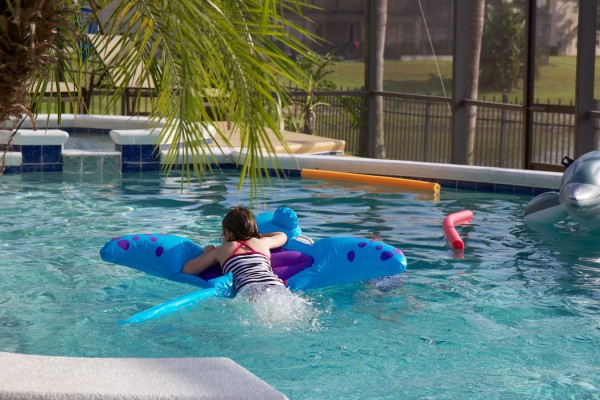 Leah instantly made the scene and danced a jig. Note the beer in the background and the tensely-posed tennis shoes. Those two things are not a coincidence. 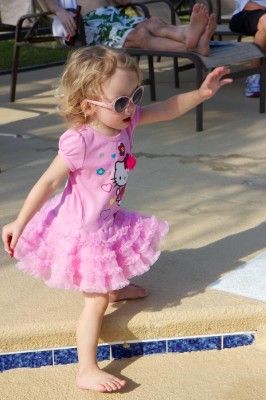 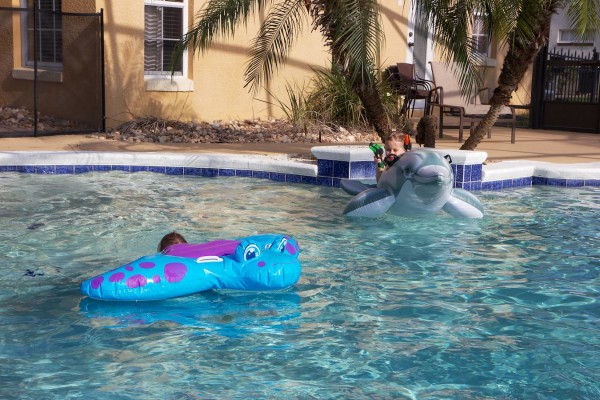 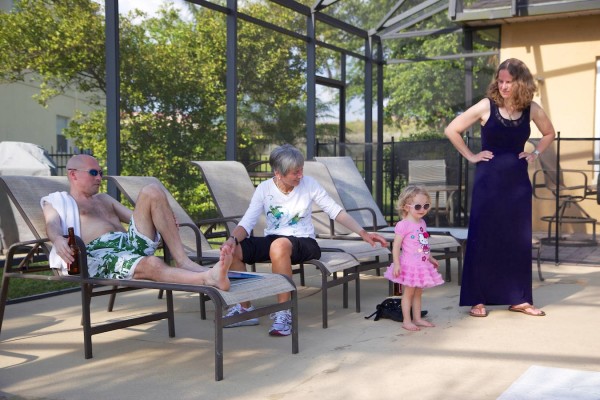 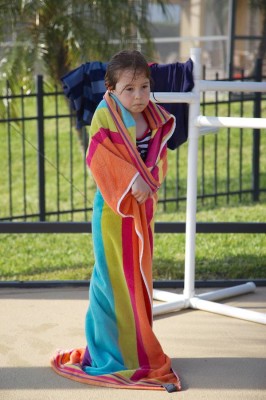 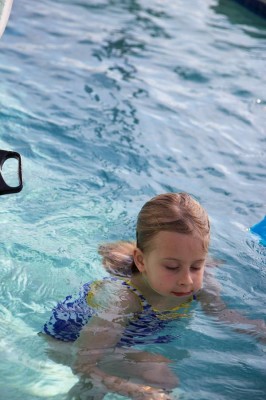 After a quick dip for the kids, we headed off to ‘Ohana at the Polynesian Resort for a bloating way to start our Disney vacation. ‘Ohana serves up family-style grilled meats and tasty appetizers, and a few tropical drinks made their way to our table (the author had a colada, thankyouverymuch). The food was excellent, and the kids enjoyed doing the Hookie-Lau and also participating in the coconut races. While we waited to be seated, Maggie showed off iPhone posture, which would also be featured later in the trip. Leah also somehow made it to the Polynesian without shoes, so she got to buy some Minnie Mouse flip flops before dinner. She was not sad about that. 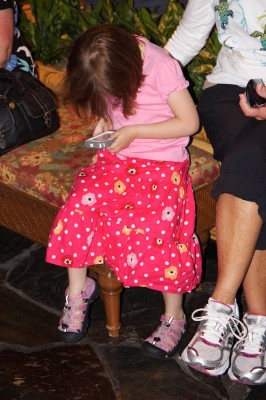 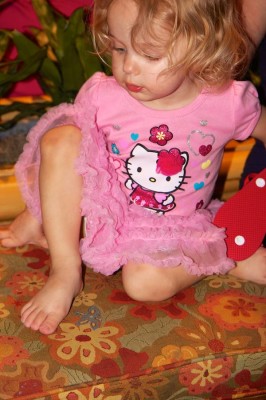 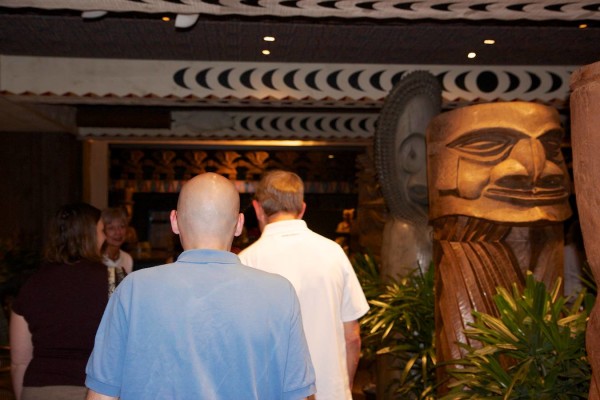 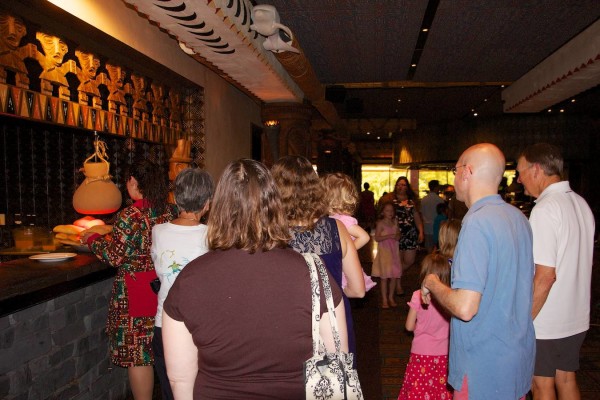 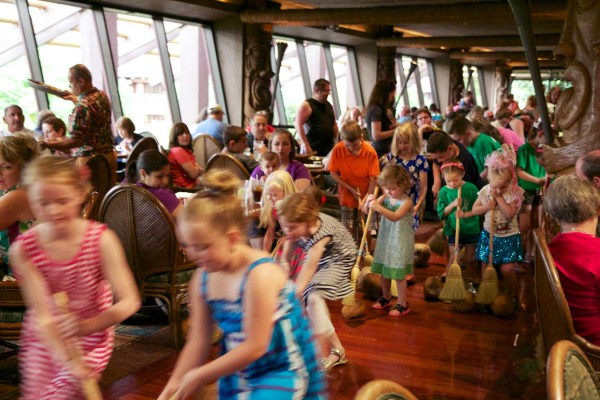 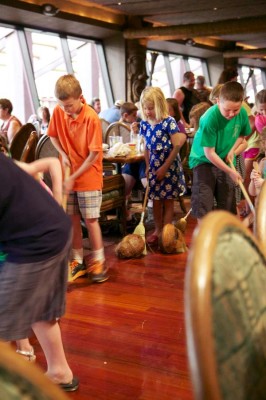 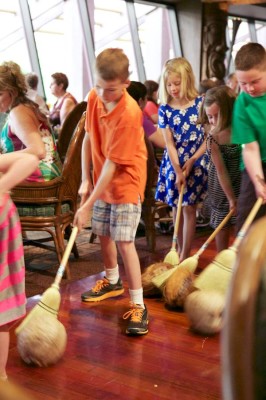 Will shows off his “I love DisneyWorld” face. You may see this facial expression again in pictures from this trip. 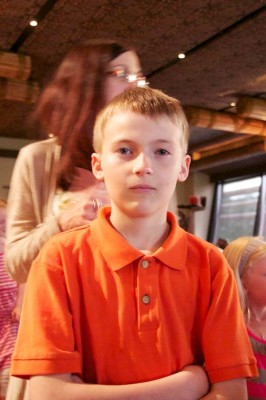 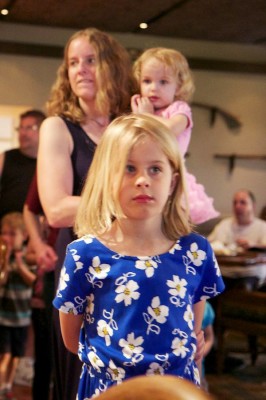 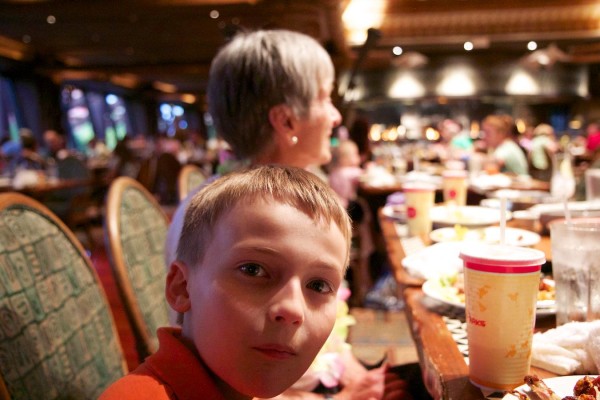 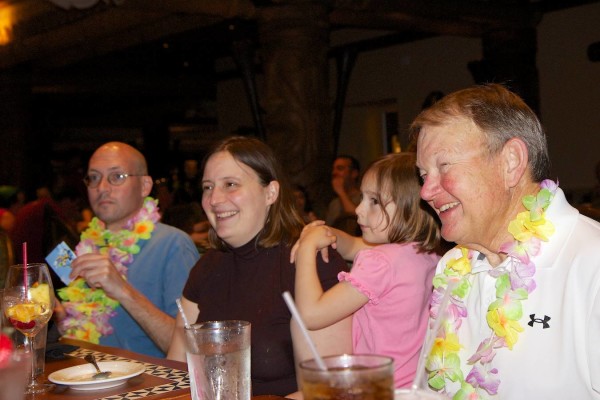 After dinner, everyone had the option of heading back to the house after a long travel day, or hopping on the monorail and heading into the Magic Kingdom for some nighttime fun. Grandpa Bill, Doug and Will opted to head into the park, while the rest of us took the conservative route and chose to rest up. On our way to the car, we headed down to the Polynesian beach and enjoyed the torch-lit pathways and the views of Space Mountain, Cinderella Castle, and the Contemporary Resort.

As we walked out to the car, we ran into Will and company, who apparently actually twice stepped onto the monorail before deciding to step back off onto the platform. Will had the typical ‘Ohana-bloat and was nervous about riding thrill rides, but also didn’t want to miss the chance to hit MK, so there was some anxiety about whether to hit the park or not. They ultimately decided to head back to the house after the two false starts on the monorail.

While I drove the fifteen or so minutes back to the house, I entertained the kids by asking them inane questions in Alex Trebek voice, causing them to erupt in screaming fits of giggling laughter. Keep in mind that my mother was also in the car and I think something may have snapped during the car ride due to the ambient child excitement level. Though this ambient child excitement noise level would be par for the course throughout the trip in my vacation car.