While the wildflower pictures I was seeing drove me to GSMNP for the weekend, the rivers, cascades, and waterfalls were among my favorite memories from my 40th birthday trip there two years ago, so there was no way I’d miss those on this trip.

On the way into the park on Friday night, I made a quick stop at one of my favorite spots, a cascade just off the side of Newfound Gap Road as it winds down from the top of the park towards its southern terminus. With the light fading, I didn’t even bother getting my tripod out, or the rest of the gear I usually use to capture long-exposure images. I just grabbed a couple of quick handheld shots, knowing I would be back on Sunday. 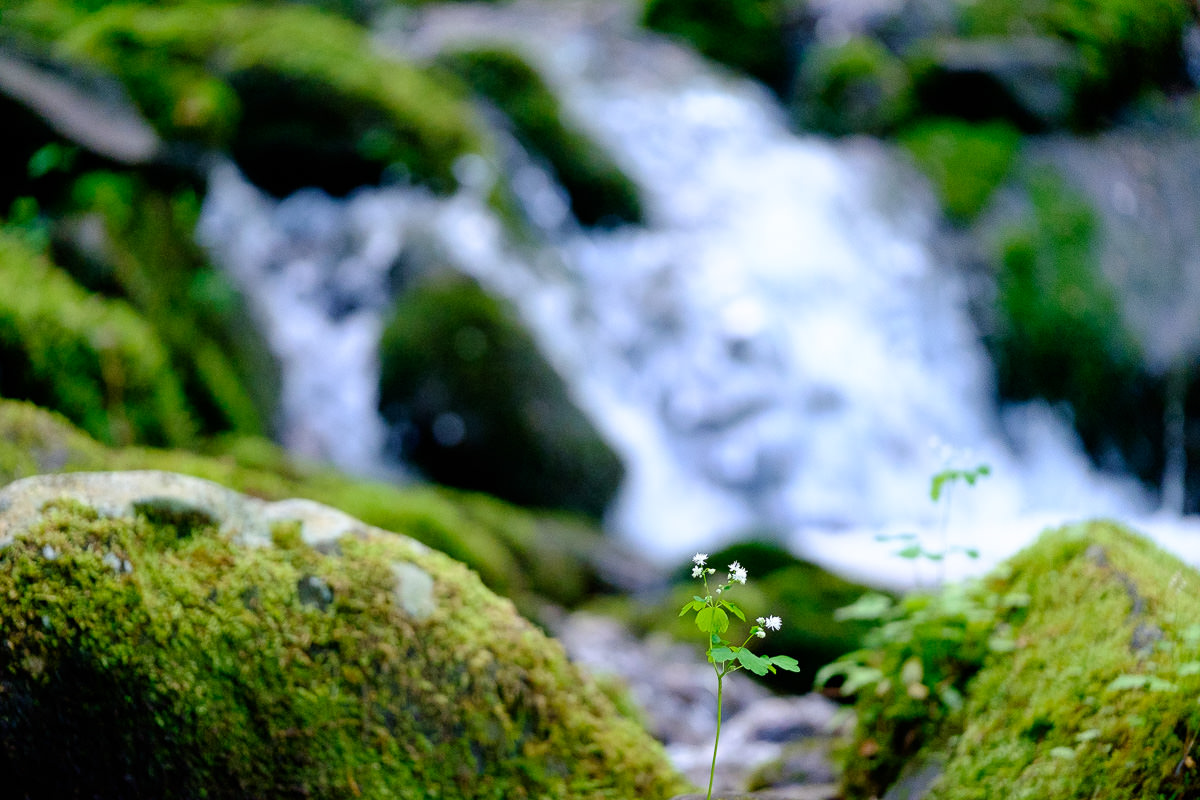 On Saturday, I hiked along the Little River Trail, which, not surprisingly, parallels the Little River, which has many rushing cascades and small drops. Some of my best pictures from two years ago came from this hike, and I could identify the spots where I had taken the good ones, so I picked different places this time. 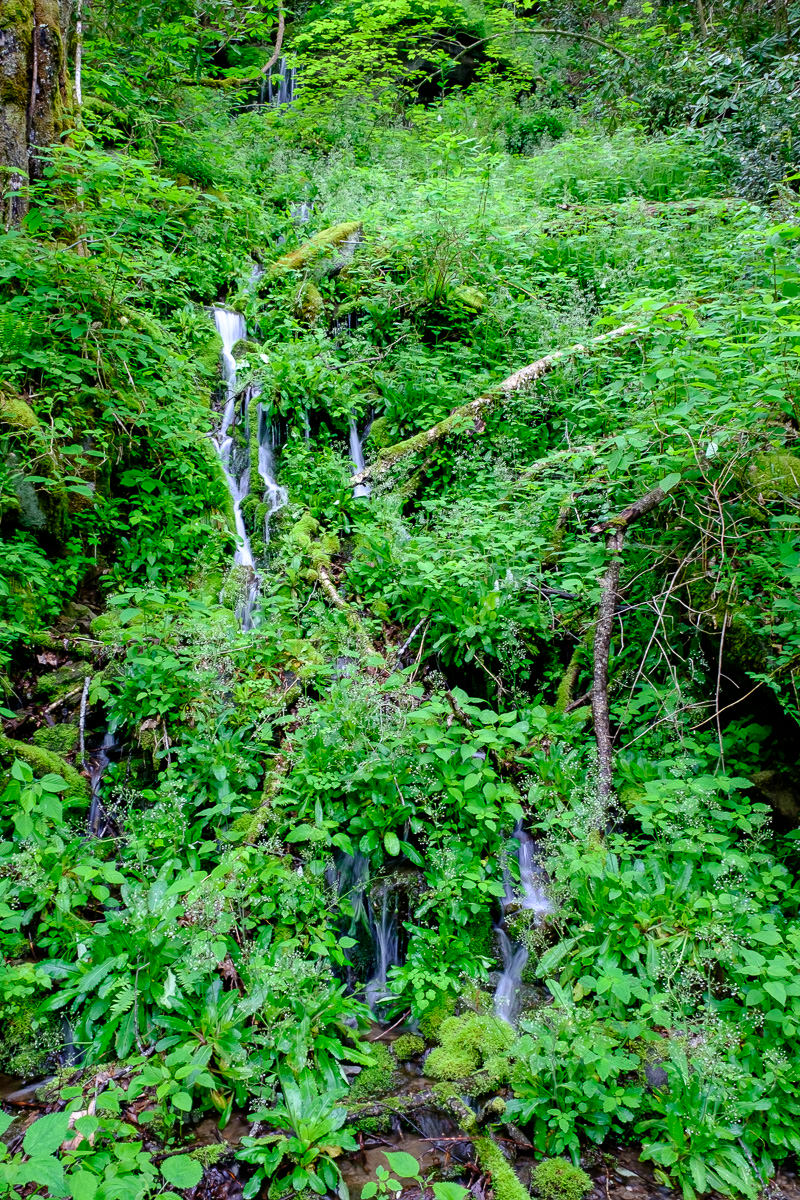 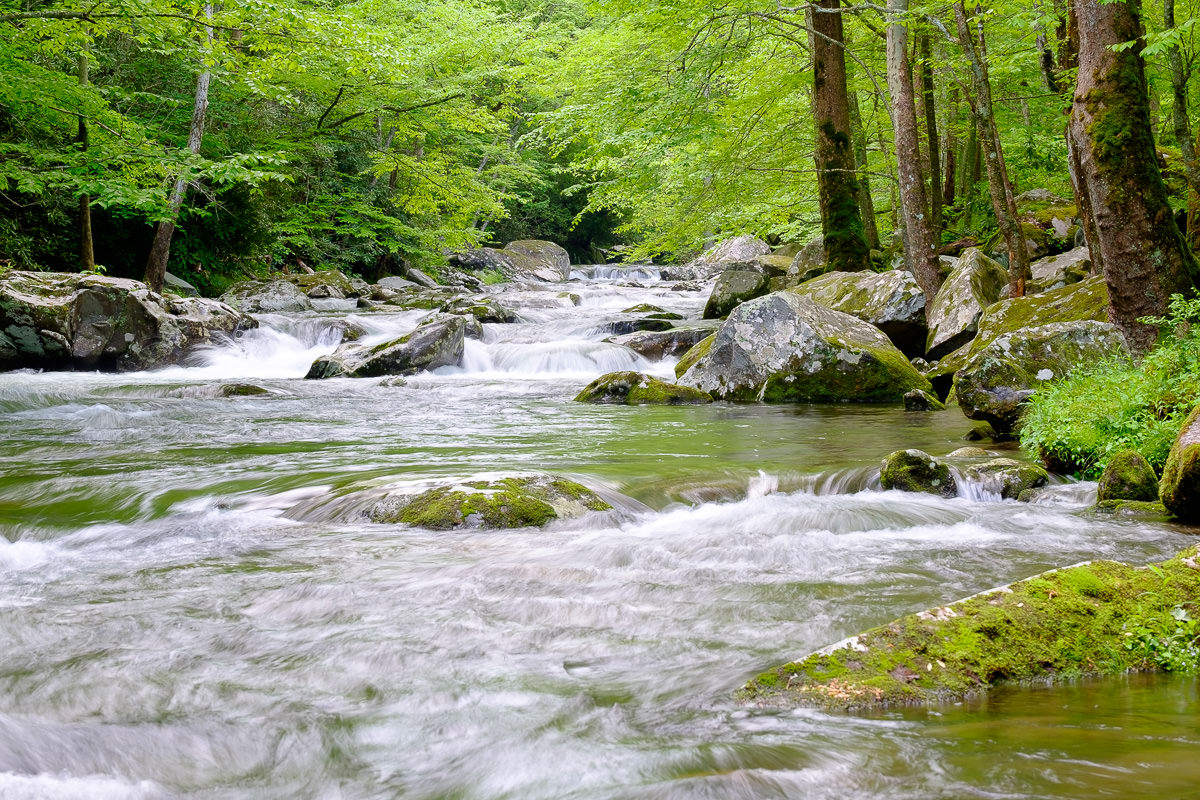 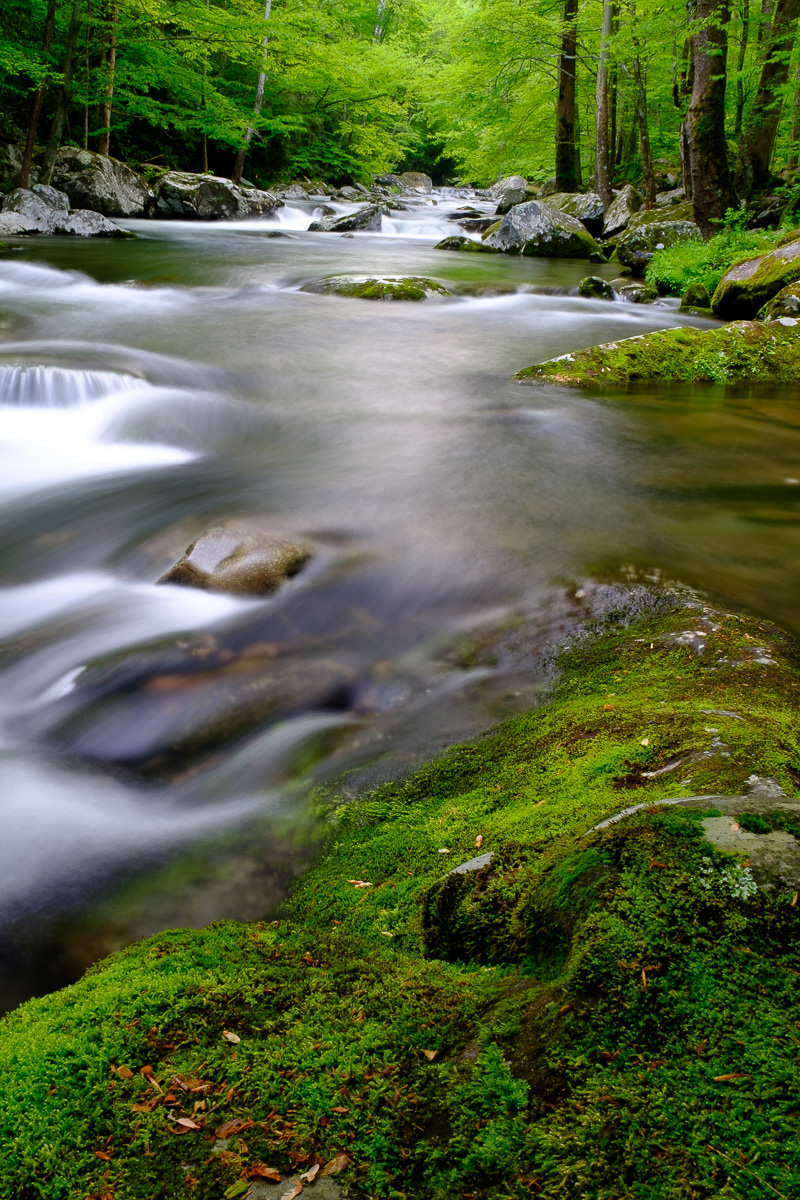 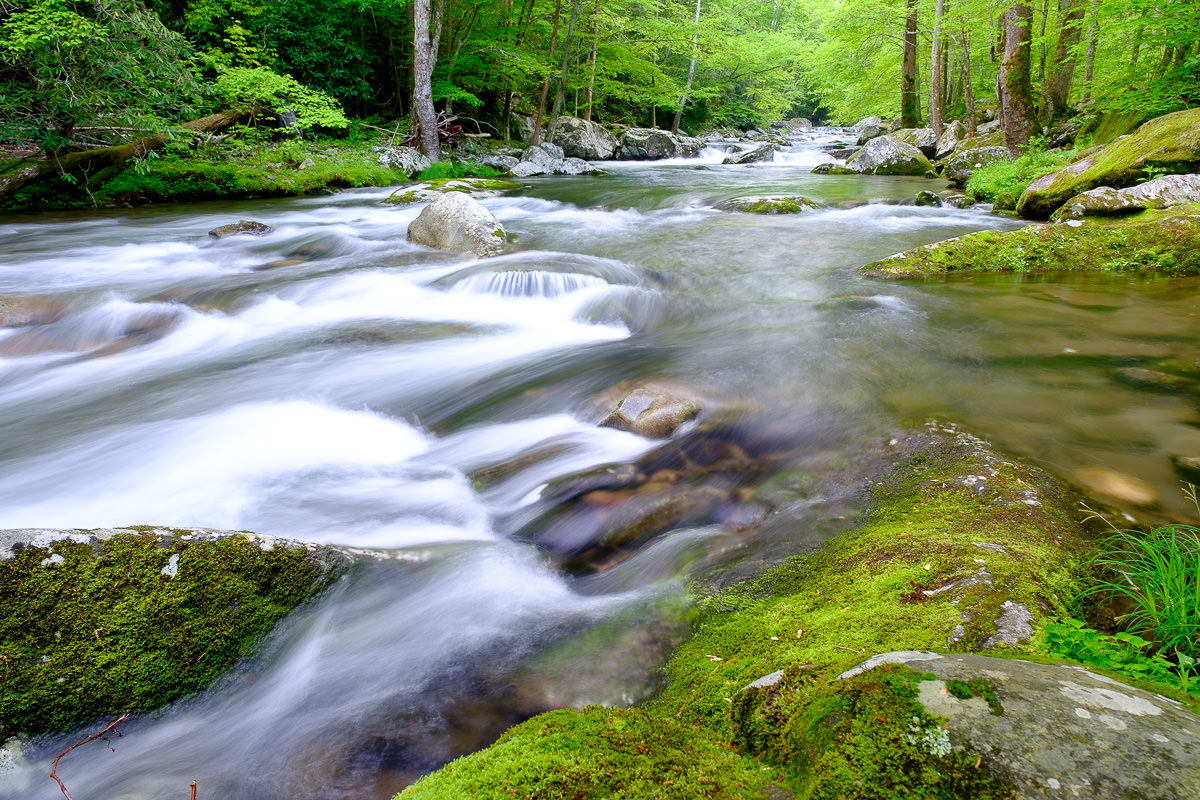 On Sunday, I started early at Trillium Gap Trail, hiking up to Grotto Falls before 8am – another hike I had done two years ago with some great pictures. I had the place to myself, except for one nice lady and her train of llamas that carry supplies up to Mt LeConte Lodge a few times each week. We leapfrogged up the mountain as I stopped to take pictures, or to catch my breath. 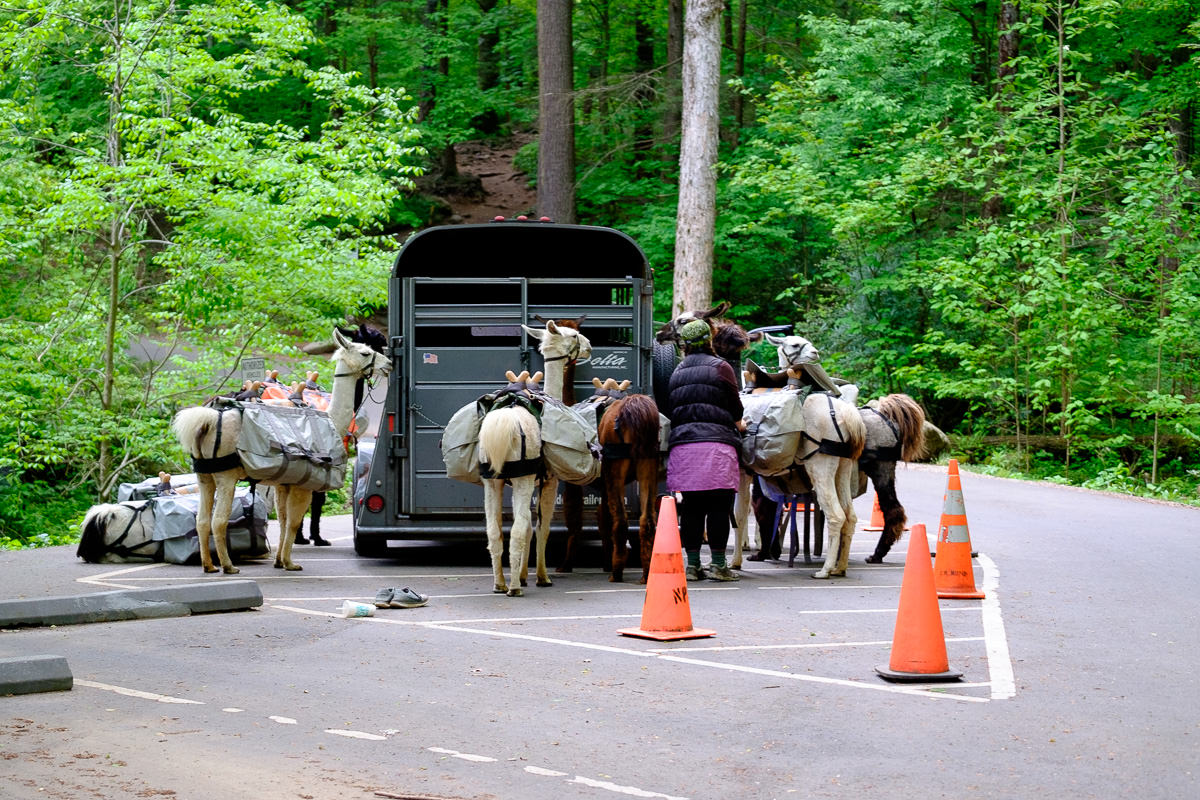 I arrived at the falls without seeing a soul, and stopped to take some long exposures in the lovely early morning light. 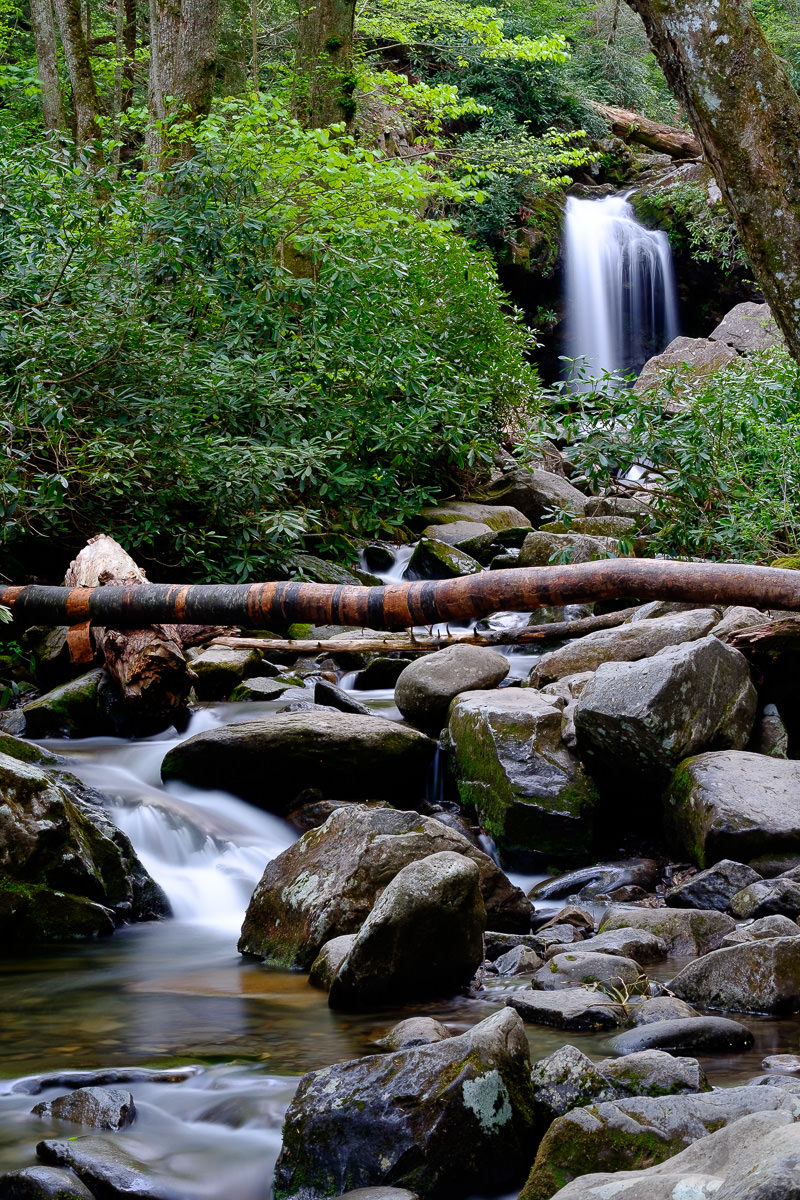 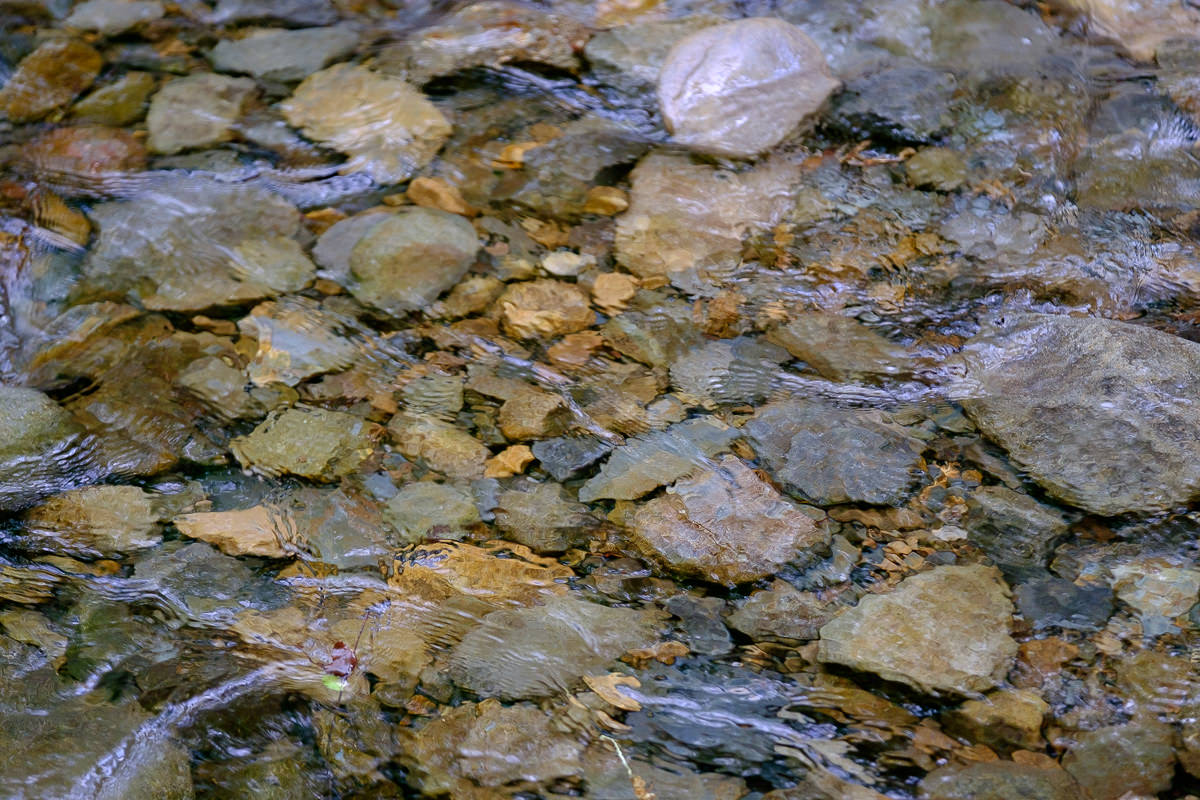 As I was packing up the gear to continue hiking up past the falls, the pack of llamas I’d seen in the parking lot arrived and passed me. 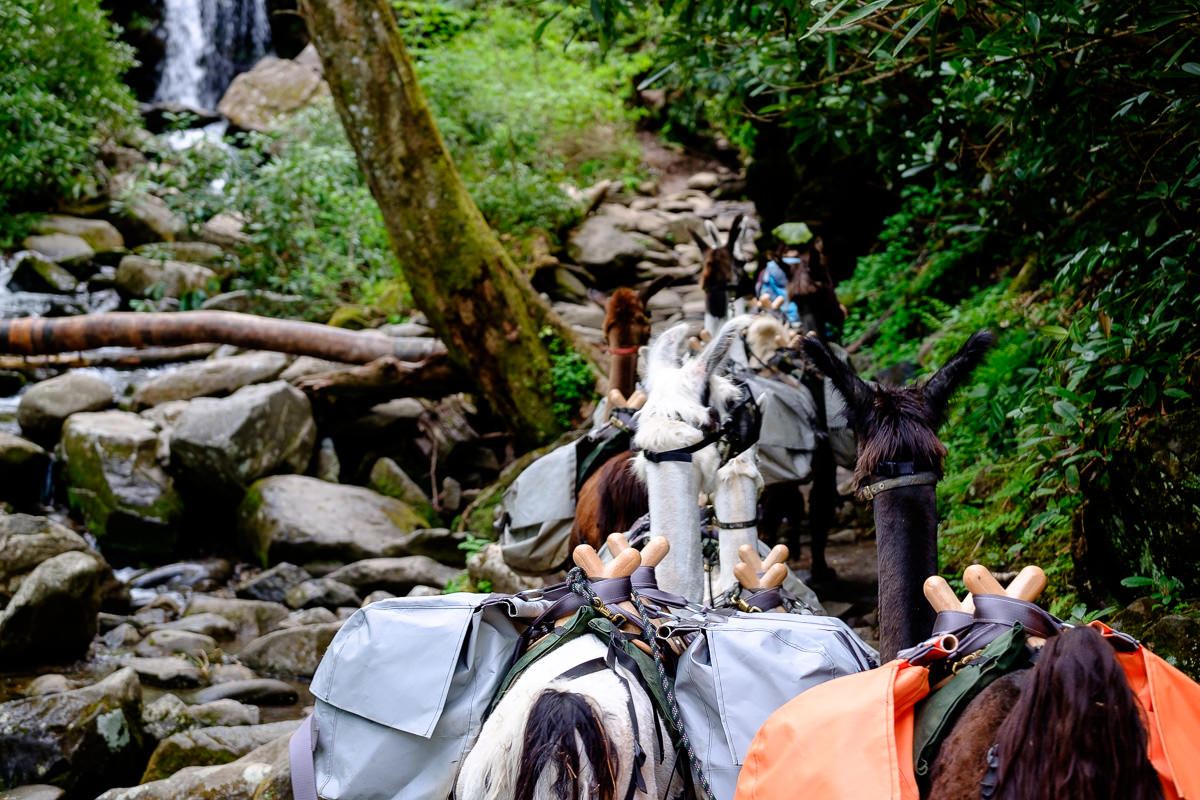 I had a massive grin on my face as I walked past the falls, knowing I’d just gotten a great shot of the waterfall and then been pleasantly surprised by the train.

On the way down from Brushy Mountain, I encountered my first hikers of the day (other than Llama Lady), but still not seeing many people until I neared Grotto Falls, which was so packed with people that I had to wait 5 minutes just to pass in the downhill direction. It’s one of the most popular spots in the park, because it’s the only waterfall you can actually walk behind. There must have been more than 40 people waiting around the falls for their chance to get their picture – it was crazy. Even though Grotto Falls is about 1.5 miles and 550 feet of climbing from the parking lot, there were people of all ages and fitness levels heading to the waterfall, even a stroller.

On my way back out of the park, I stopped once again at my spot on Newfound Gap Road to photograph the spilling water. I love this spot because it captures so much of what is great about Great Smoky Mountains National Park in one small place: rocks, moss, cascades, and ridiculously lush greenery. 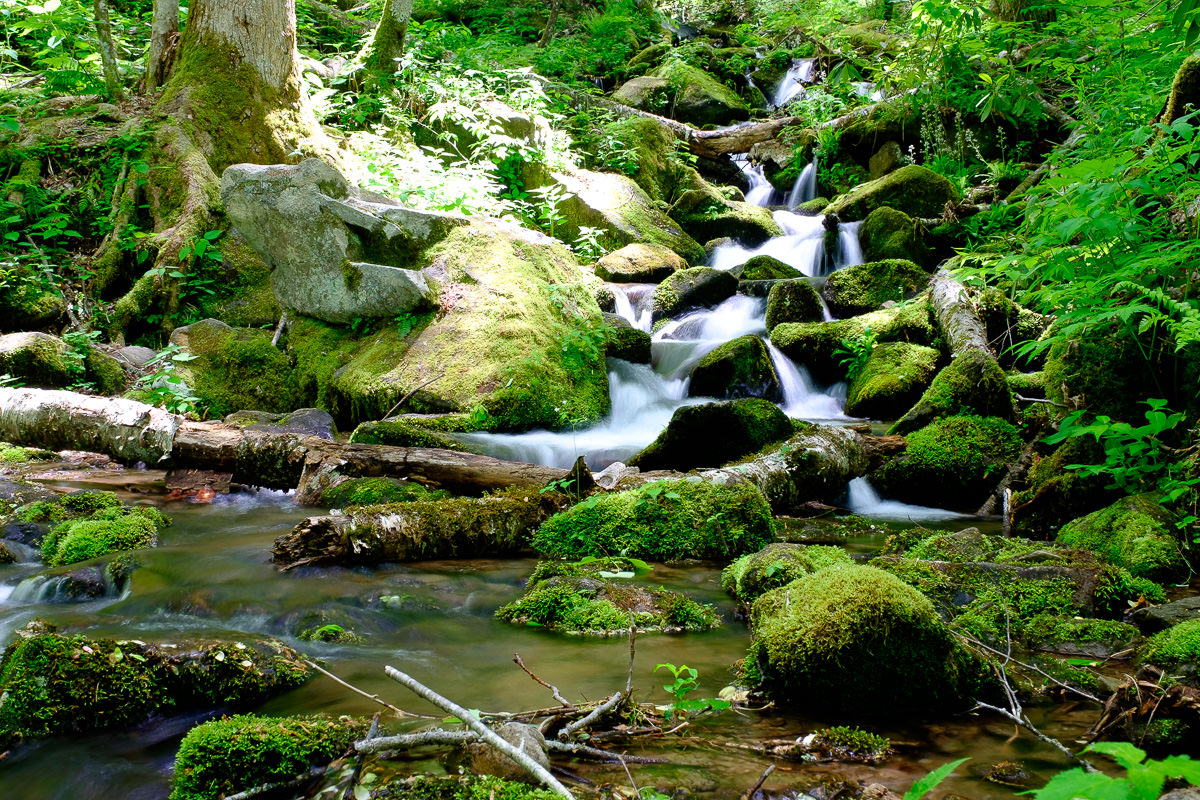 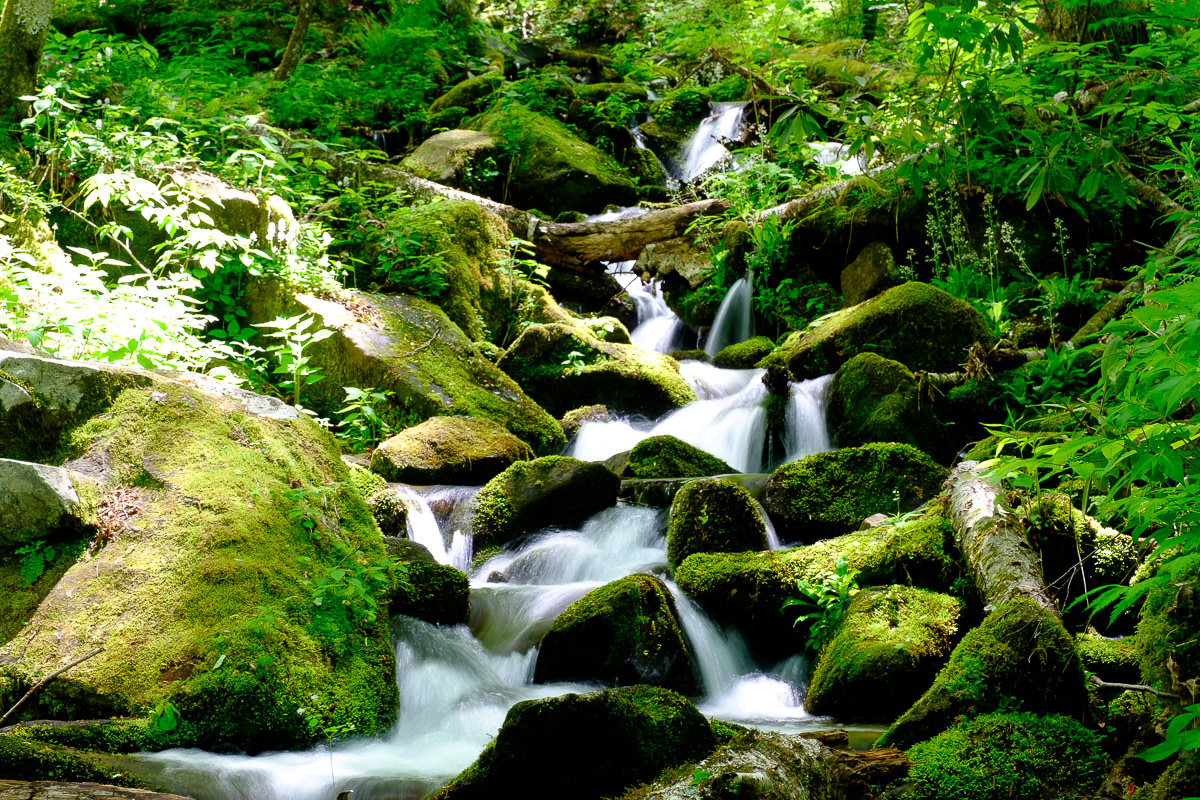 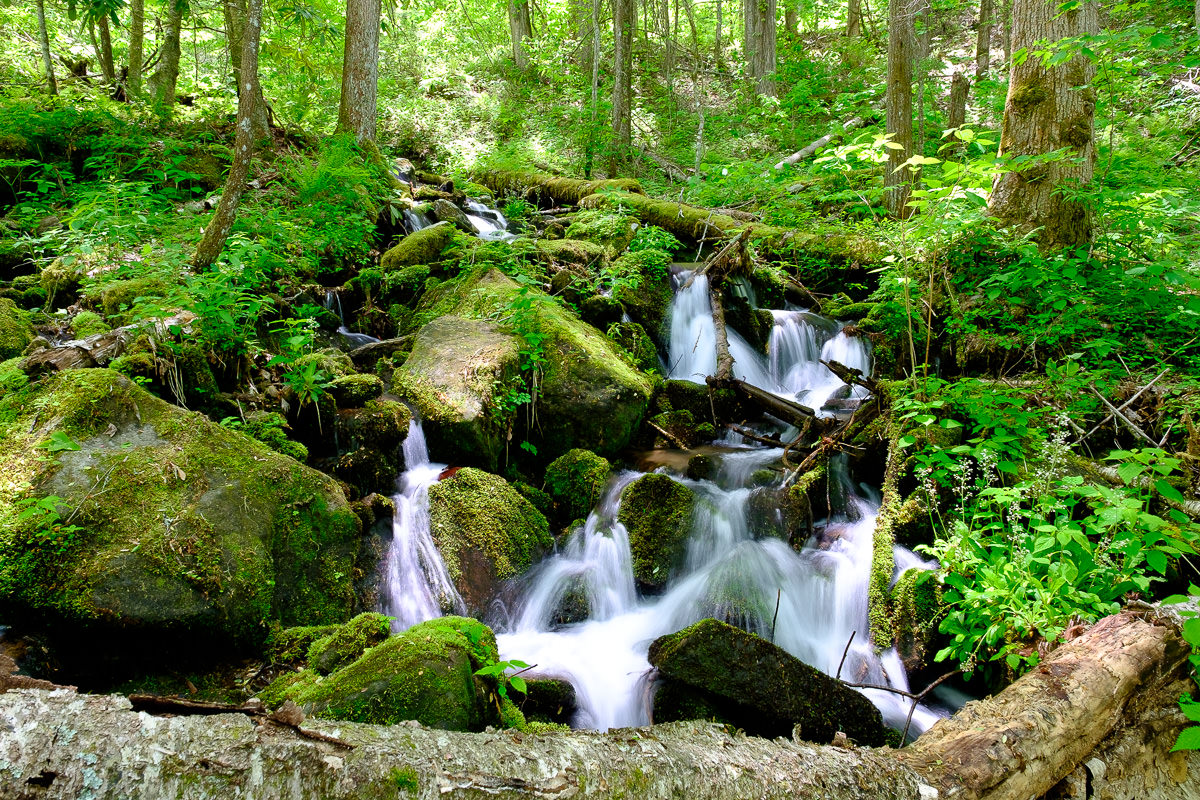 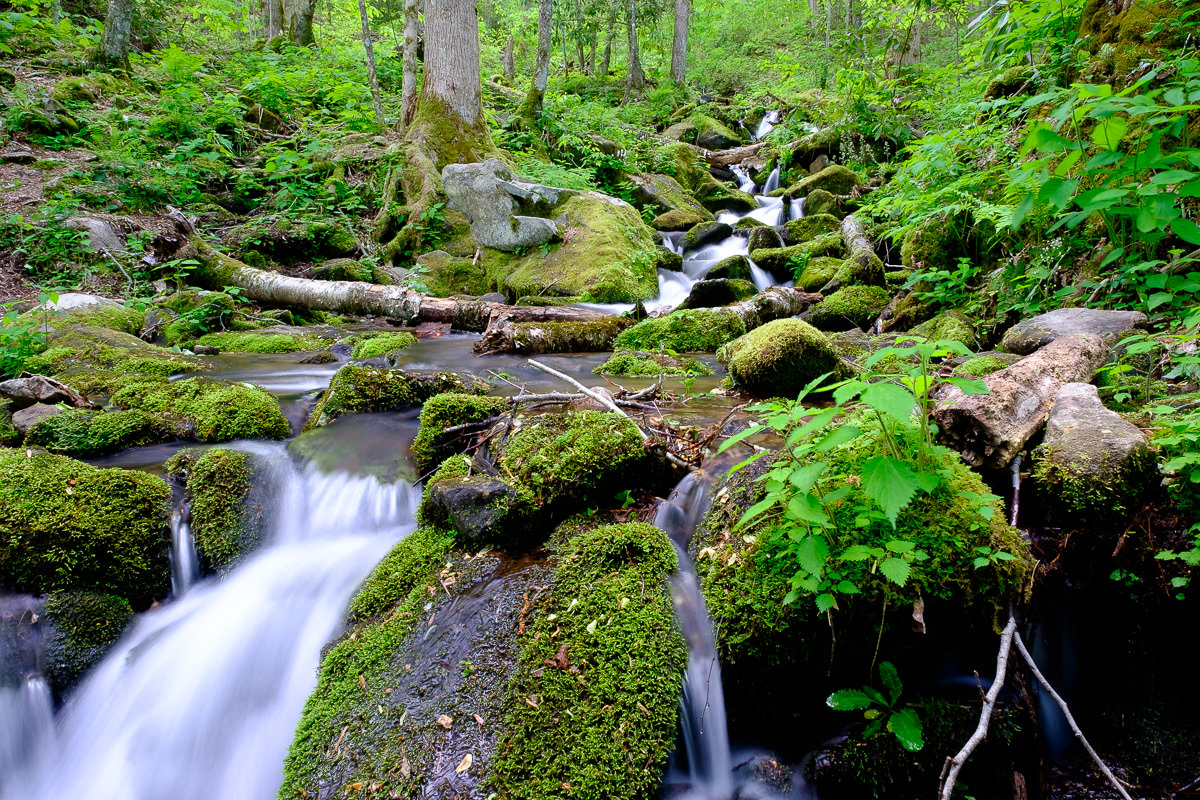 This time, I took my time and got the tripod, release, and ND filters so I could get the type of pictures I was after. I spent 45 minutes or so wandering around the rocks alongside the mini falls capturing pictures from different angles.