I have mentioned this in multiple posts already, but I will mention it again: this place is spectacular. I decided that I wanted to check out Cherokee/Deep Creek, which meant I got to drive from the Tennessee portion of the park straight through to the North Carolina portion of the park. I’ve long loved Trail Ridge Road in Rocky Mountain National Park, but it clearly takes a second place to Highway 441/Newfound Gap Road. The high views on Trail Ridge are slightly better, but the roadside scenery at GSMNP beats it. And there are treasures hidden everywhere, some with turnout areas, some without. My head was whipping around all over the place, so I’m glad the speed limits are relatively low. 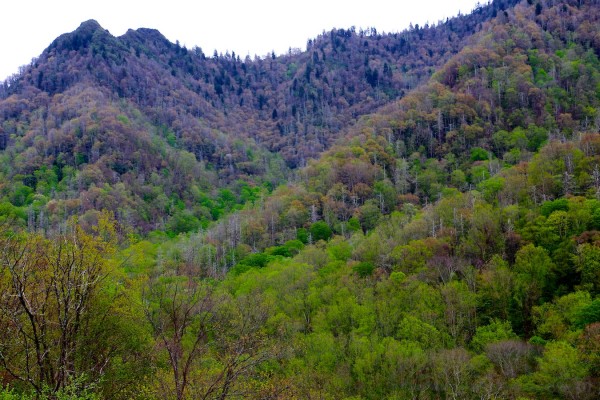 Shortly after passing the peak of Newfound Gap, I was racing downhill when a small cascade to my right caused me to mash on the brakes and barely make it into the turnout. Did I really just see what I thought I saw? Indeed I did: 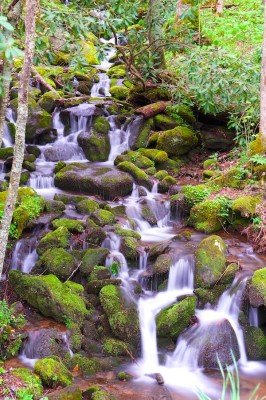 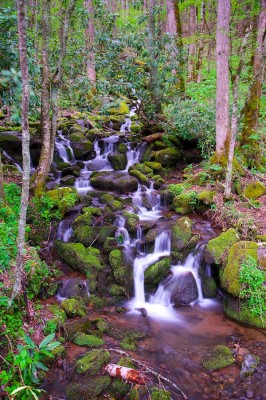 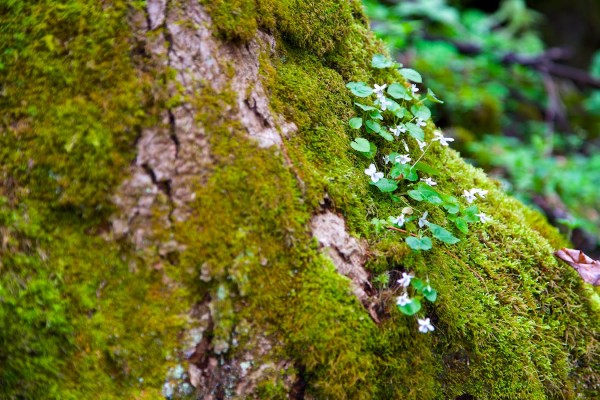 This is ridiculous – it’s tucked a bit off the road, and cars sped by the whole 30 minutes I was stopped here. One car stopped and came out with their camera, telling me “We saw your big camera and figured there must be something good here.” which caused a true LOL. I shot the first few pictures from the road, then clambered up to the middle of the little creek to take a few more pictures. During one long exposure, I went back to the car and got my iPhone to take these pictures of the setups: 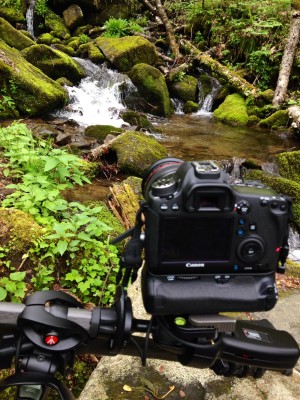 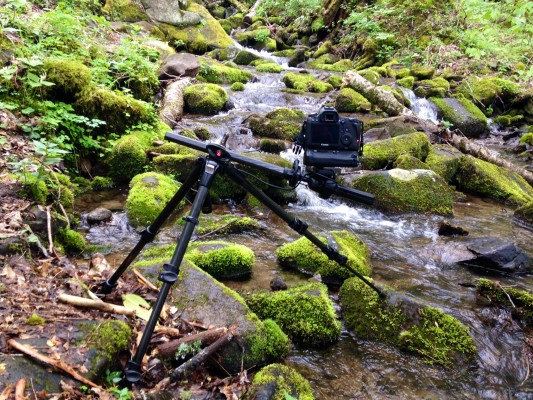 Those setups lead to these pictures: 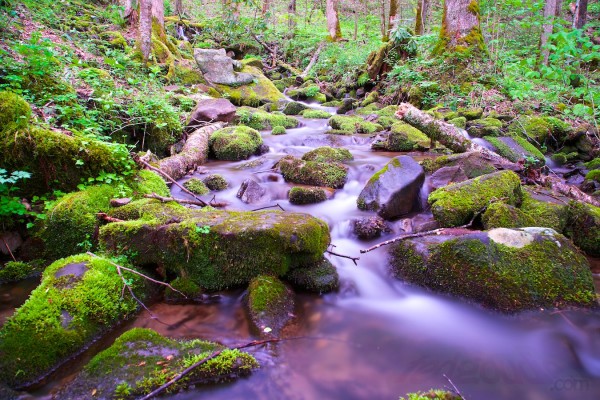 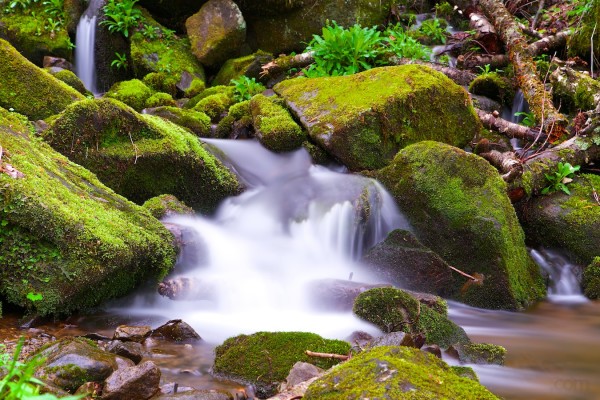 The drive through the park is breathtaking, and there is construction at several points, which I liked, because it gave me a chance to spin my head around 360 degrees to take in the views all around while driving slowly or waiting for the flagman to spin the sign.

I drove through Cherokee and headed 10 miles further to Bryson City, where I found my way to the Deep Creek area of the park and visited a few waterfalls. As I began the drive back, I took the ubiquitous sign picture that my family history requires of me: 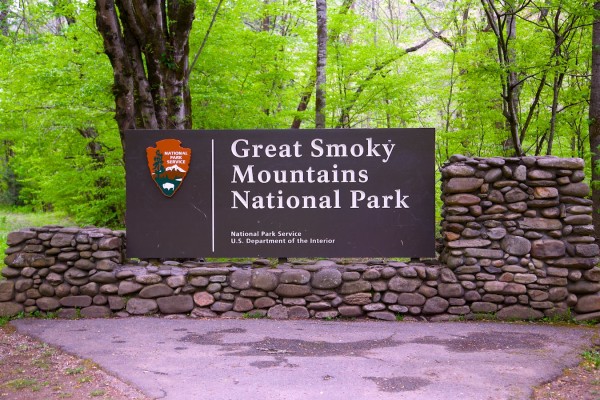 I drove back to the top of Newfound Gap and decided I’d go visit Clingman’s Dome, which is the highest peak in the park. It was overcast and breezy as I started the seven-mile drive up to the Clingman’s. I drove for about a mile before the clouds became fog and the road nearly disappeared as rain teemed down. I somehow survived the curving road and made it to the top of the park, where the fog was even thicker, and the clouds were angry that I was interrupting them, so they deposited all their water on me and blasted me with wind. Here’s what it looked like up there: 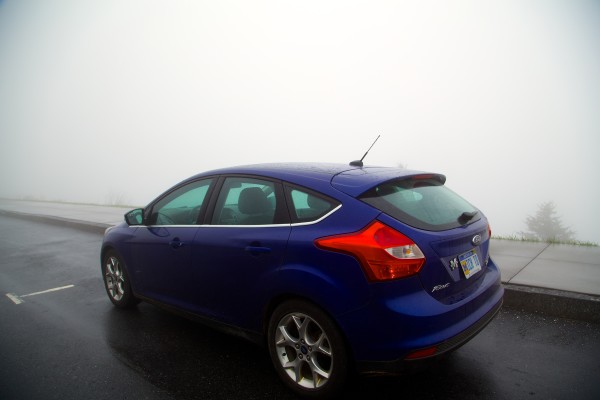 You can usually see 50-100 miles from this very spot. I downed my rain gear for the first and only time on this trip and walked to the store, where they told me it had been clear not fifteen minutes before. Clingman’s Dome has a unique viewing tower up even higher, but I elected not to walk up the half mile and hopped back in the car for the trip back to earth.

I had driven less than a mile when this little fella scampered up from the hillside below on the right, stopped in front of me and gave me a look that clearly said “It’s your fault, this weather” before ambling across the road and climbing up on the left side. I did manage to open the window and shove the camera into the elements and got lucky twice: 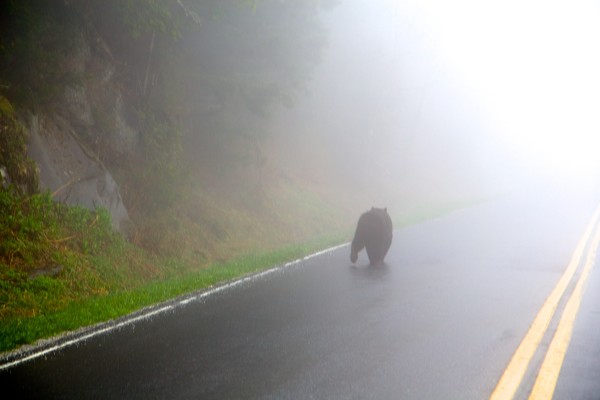 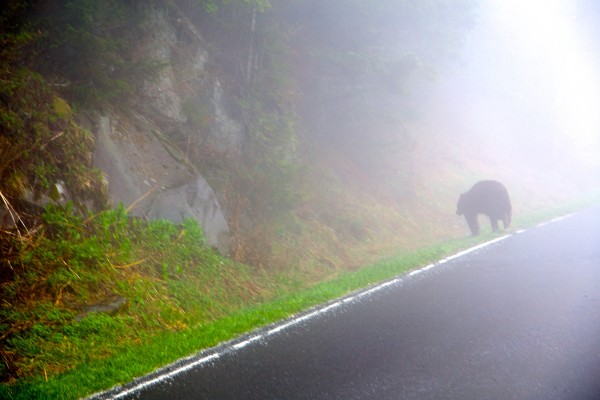 By the time I’d descended to Newfound Gap, the clouds had thinned, but it was still quite blustery and rainy. 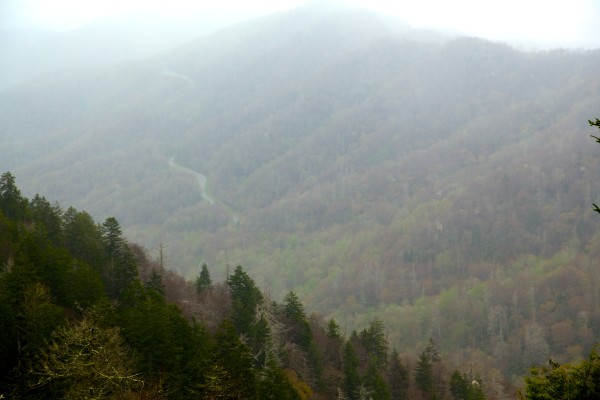 I headed back down towards Gatlinburg hoping that I’d find clearer weather there.