A year ago, we bought annual passes while at DisneyWorld, planning to come back a year later to celebrate Leah’s birthday again. (Yes, we snuck an extra trip in on the passes in July, but #dontjudge). Thus begins that second, um, third, trip.

I left work on Friday and drove through pouring rain throughout most of South Carolina, and then through wet Georgia roads, before stopping for the night in St Augustine. When I got to the hotel a bit after 11pm, I made a few fastpasses for myself for the following day.

After a crappy night’s sleep, I hit the road under cool and cloudy skies, with the occasional sun breaking through. 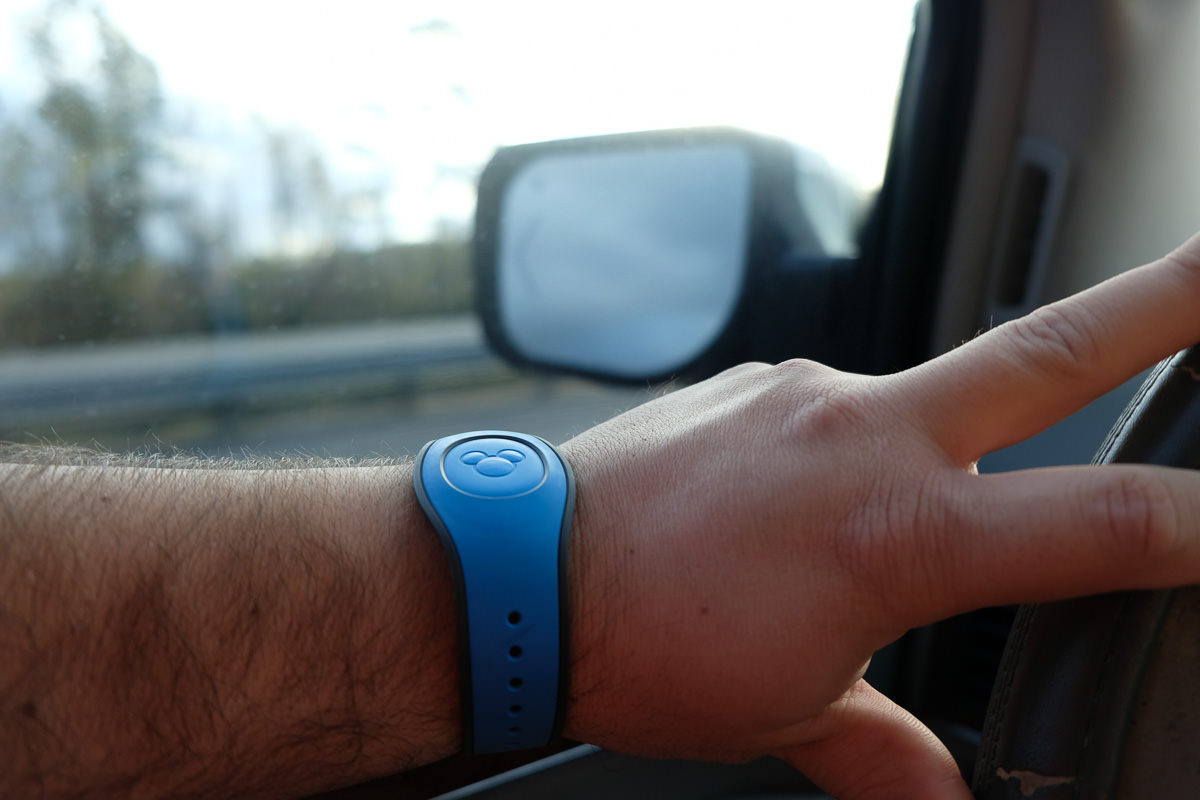 I made it to EPCOT around 9:45, and the place was already packed. Monday is MLK day, and that makes for some very crowded parks. I mean, we were there on 4th of July this past year, and the busiest days that week were 7/10. Saturday and Sunday of MLK weekend are 9/10 – the busiest days we’ve ever been here. It felt like it going through the parking gates, waiting to park, and then waiting to get through the bag line at security.

I wasn’t bothered by it – happy just to be here. I headed over to Soarin’ and got straight on. I was seated in the far lower left, which is a much different experience from where we usually sit in the top middle (the girls like being as high as possible when the lift goes up). Everything flew by more quickly being lower on the screen, which makes me want to try the bottom middle section sometime as well. 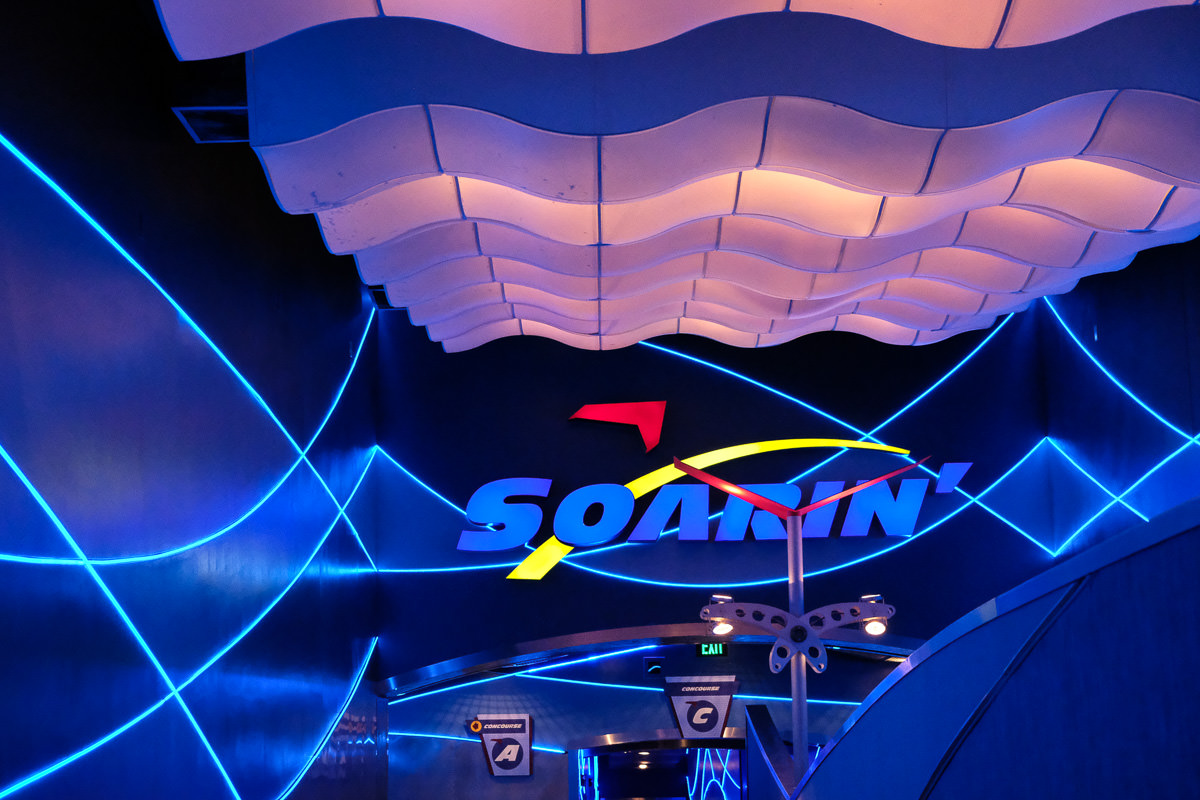 After that, I hopped on Living with the Land, the slow boat through their futuristic gardens, which we haven’t ridden in a few years. I grabbed some food before leaving the pavilion and heading over the Living Seas, and entered through the gift shop, avoiding the 30-minute wait to enter through the Nemo ride. I love spending time inside the Seas – it’s very calming. A massive sea turtle (tortoise?) swam right up the glass and stopped with his face inches from mine – until some little kids pushed in front of me to see him up close.

I then used my 3rd fastpass of the morning to see a few old friends: 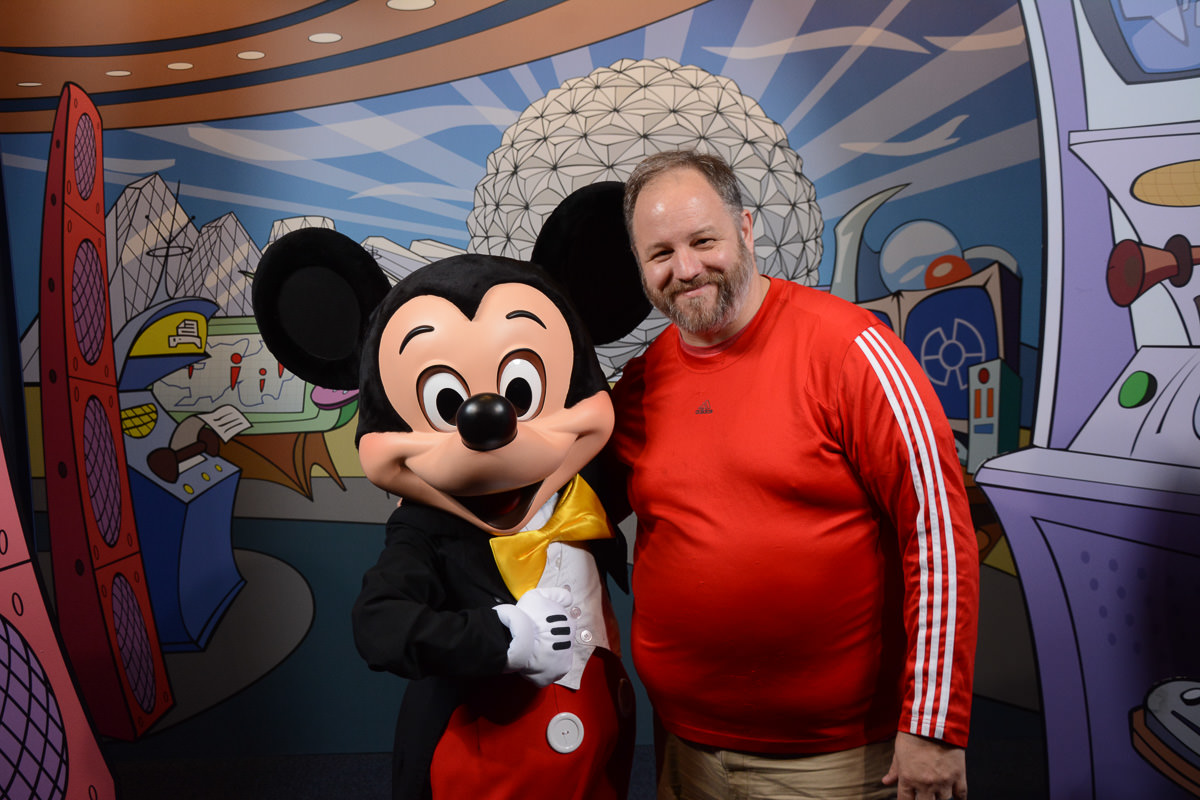 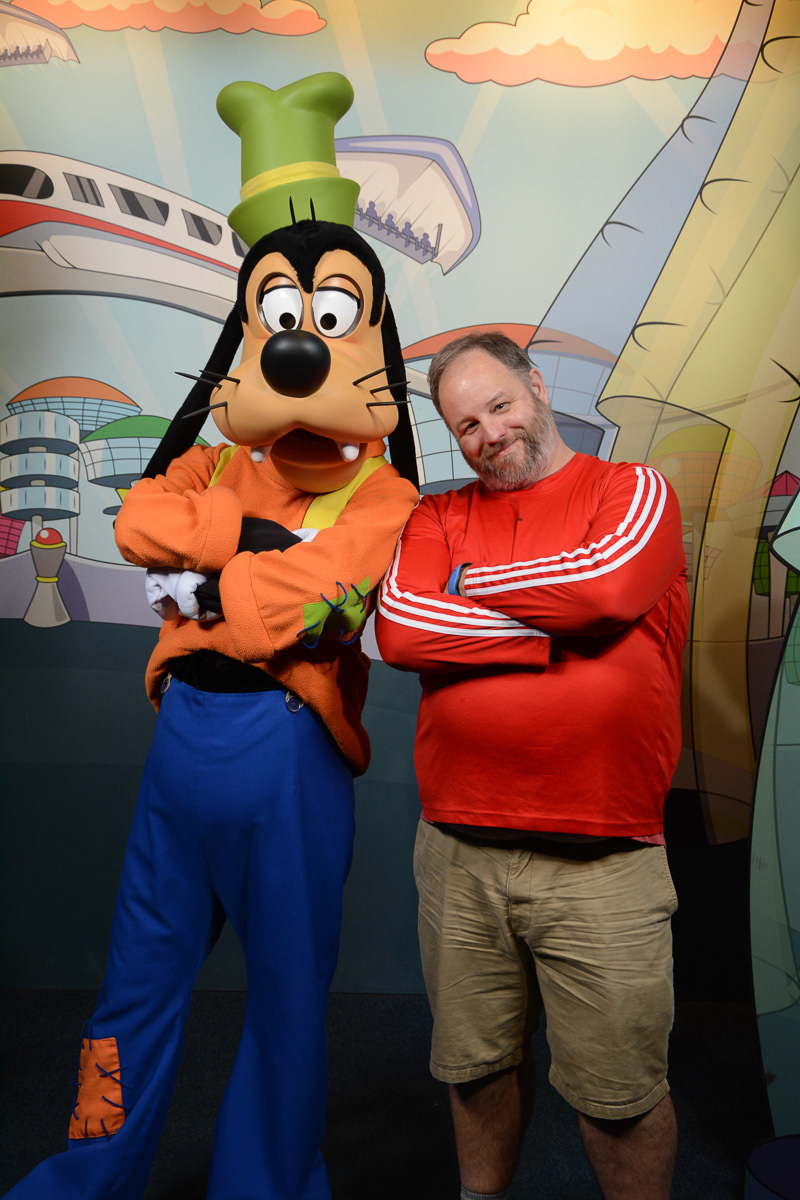 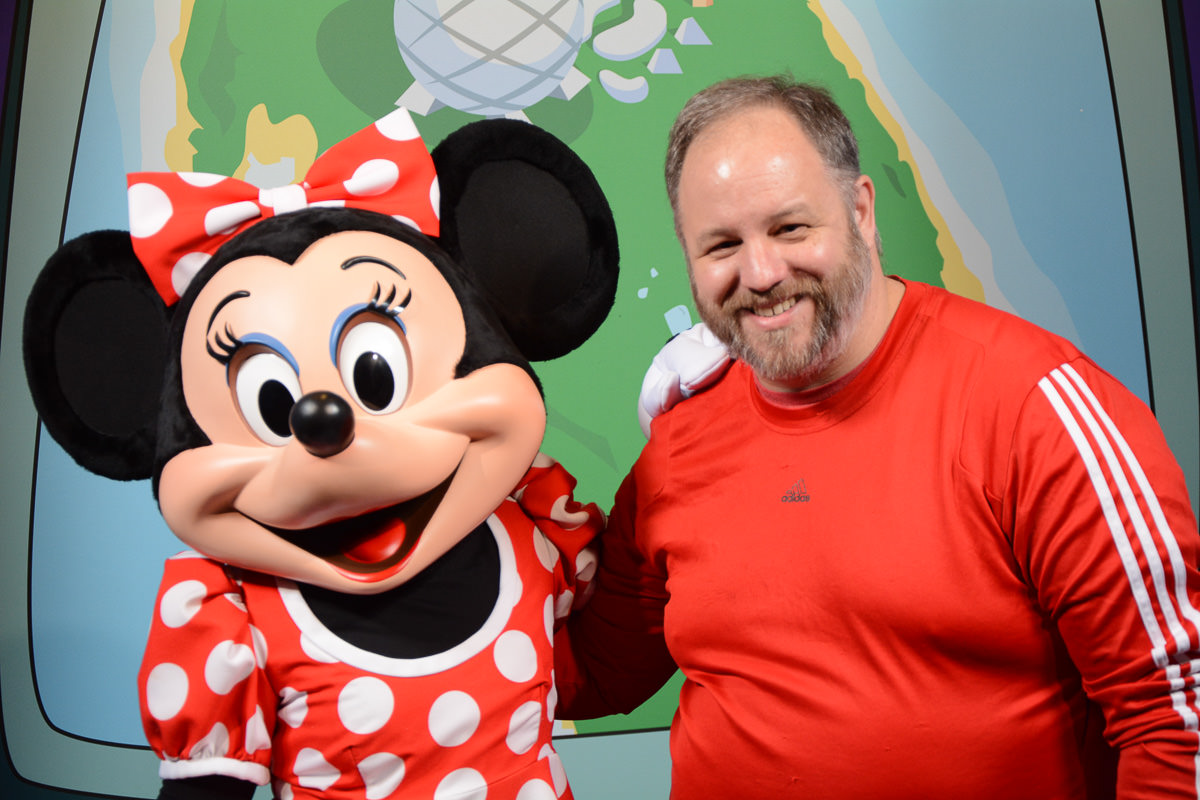 Club Cool is right next door, so I headed in for one quick cup to make sure that Melon Frosty was still there. I sent Rachel a few pictures and she told me that Leah was mad seeing me do all this stuff without her. Oh well, she’d be here in a few hours anyway. 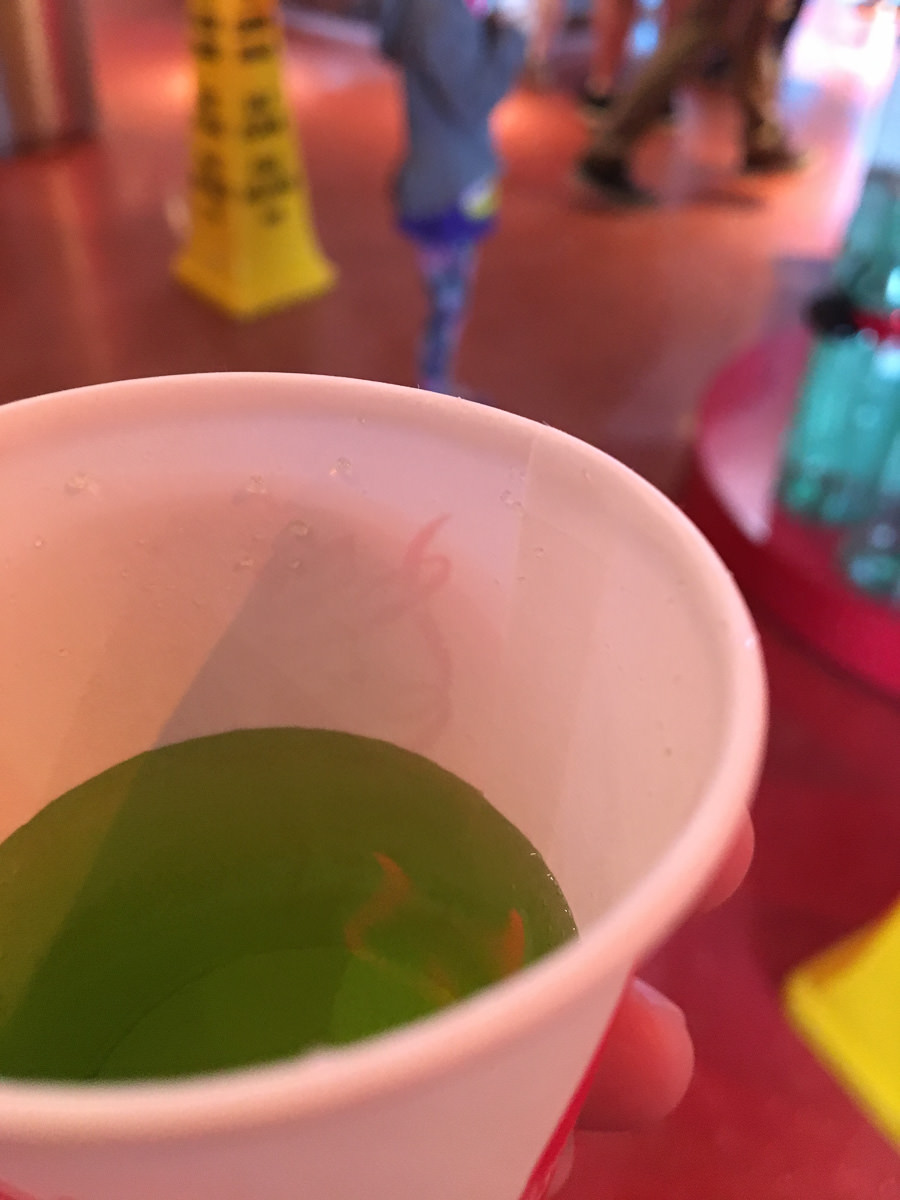 I had snagged another FP for Test Track later in the afternoon, but wandered over to see how long the singles line was. It seemed reasonable, so I jumped in line and waited about 20 minutes to ride – not bad, considering the standby wait time was 90 minutes at that point! As usual it was a fun ride, though not quite as fun with strangers.

From there, I walked around the countries at EPCOT, not really stopping anywhere or getting anymore pictures with characters. The crowds were kind of nutty at this point. Near France, Aurora was in her usual meet & greet spot, which frequently has a small line, because it’s kind of out of the way. Not today – I counted 42 people in line!

I started heading out of the park, stopping in a few stores to check out the cool retro EPCOT35 merchandise, but didn’t buy anything. 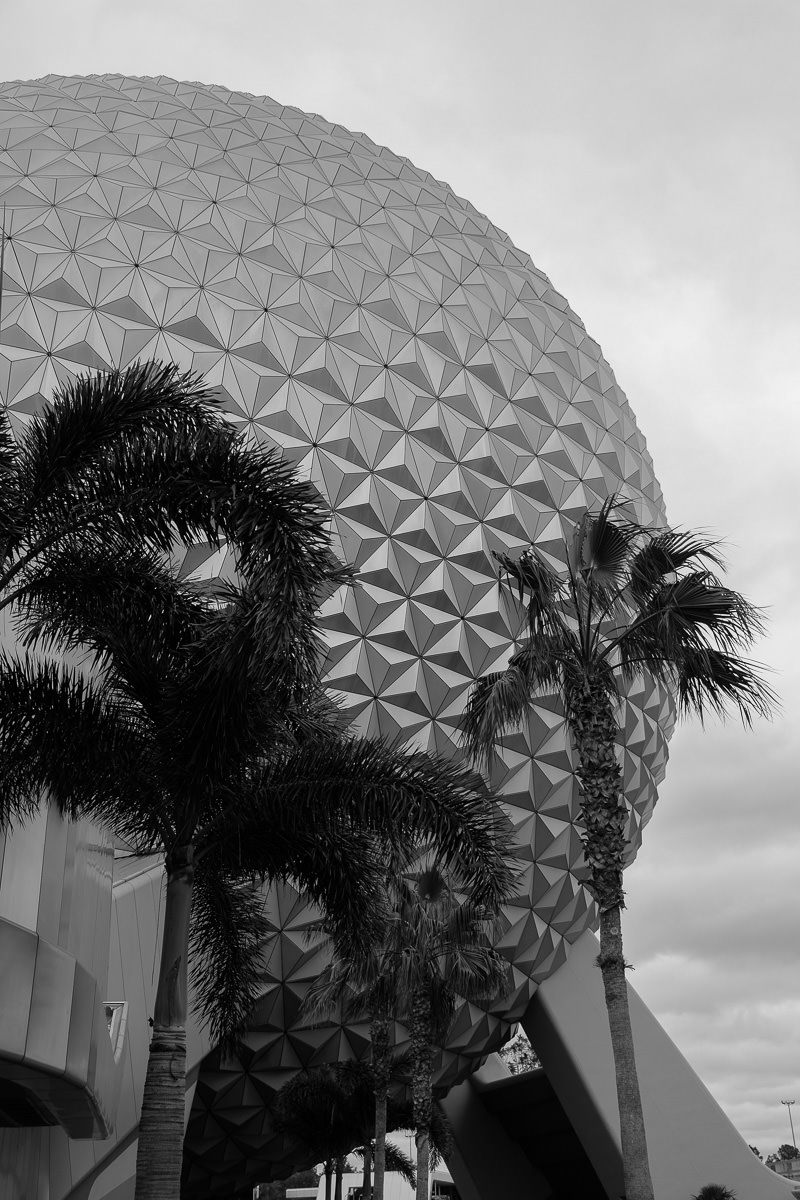 From there, I went somewhere we’ve never been before: the Disney Character Warehouse, which is an outlet store run by DisneyWorld at a nearby outlet mall. It was sweet, and we’ll definitely be going sometime this week once everybody is here. I got two t-shirts for $10 each, and picked up a couple small things to welcome the girls when I pick them up at the airport tonight.

After that, I grocery shopped and headed to our rental house to relax for a bit before heading to the airport.

Their plane was a bit late getting into Grand Rapids, but they ended up only 15 minutes late on the ground in Orlando. We grabbed their bags and headed to Disney Springs (that’s a lie – we never said “Disney Springs” in this family, we only say “Downtown Disney”), for another great dinner at Raglan Road. The risotto was excellent as ever, and the soup on this day was potato leek, which we all loved. 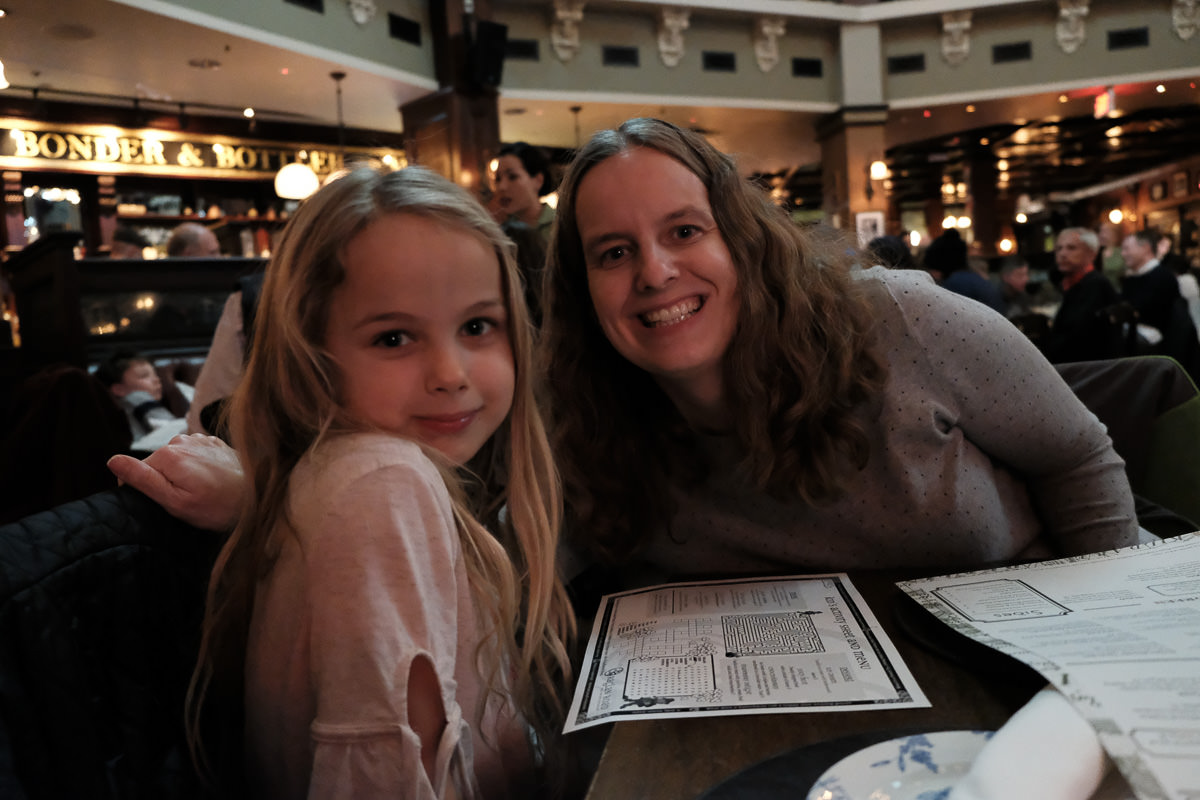 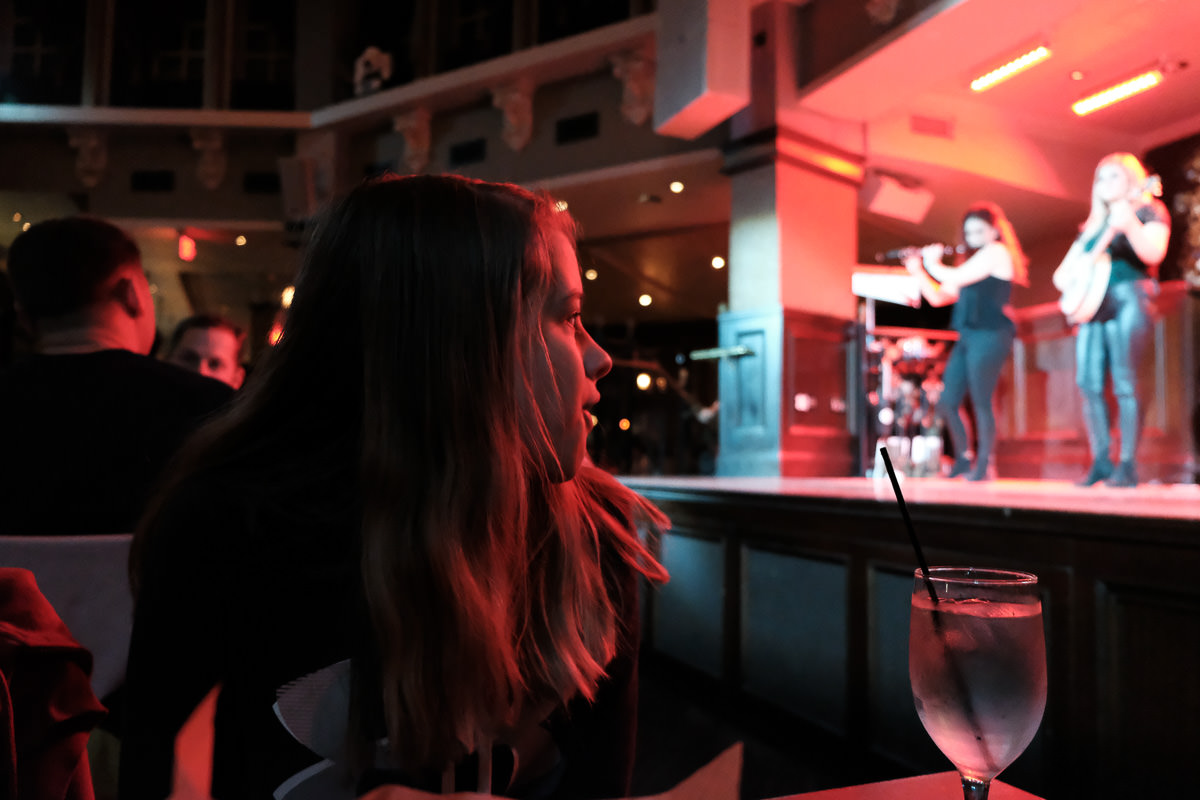 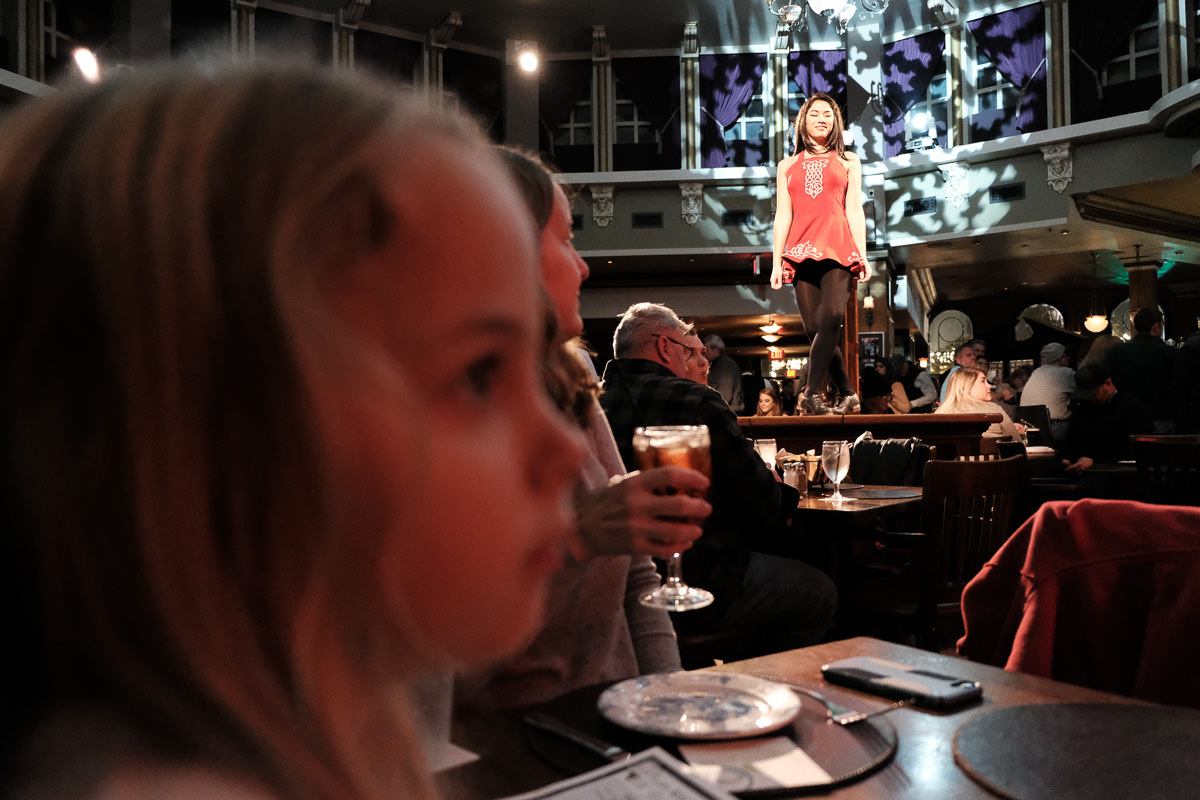 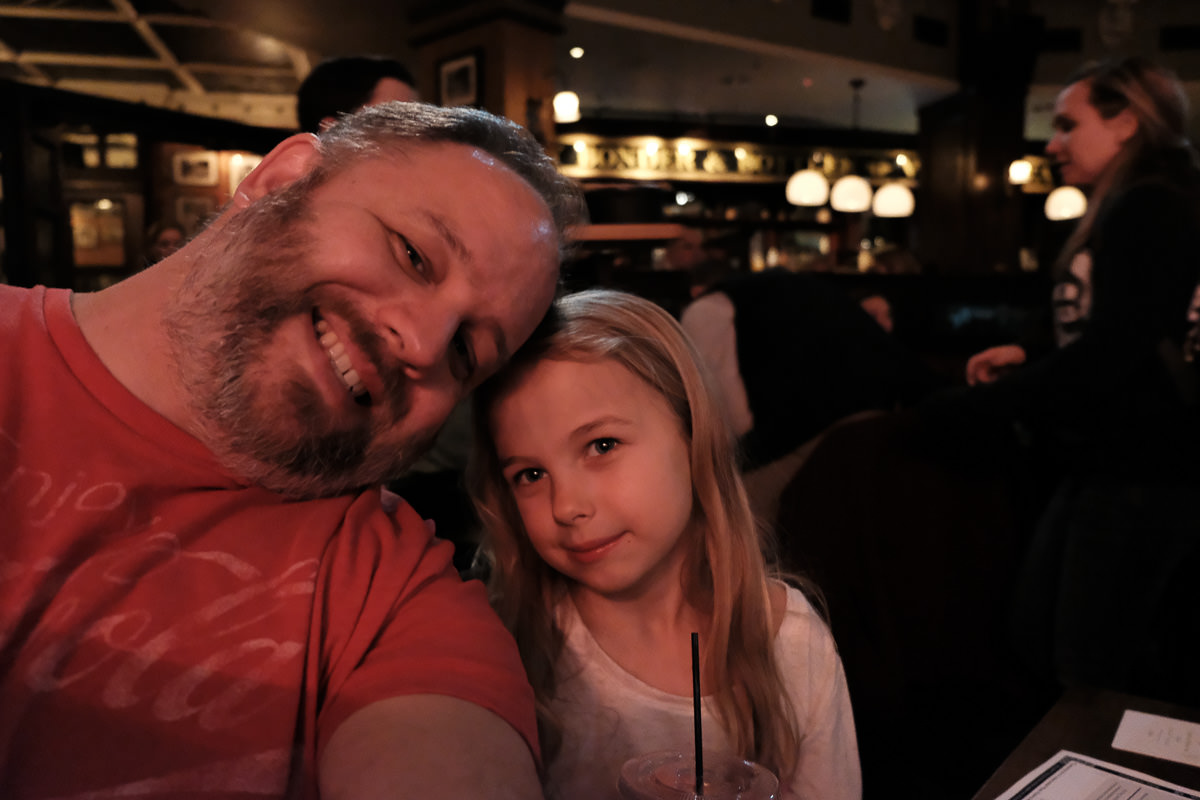 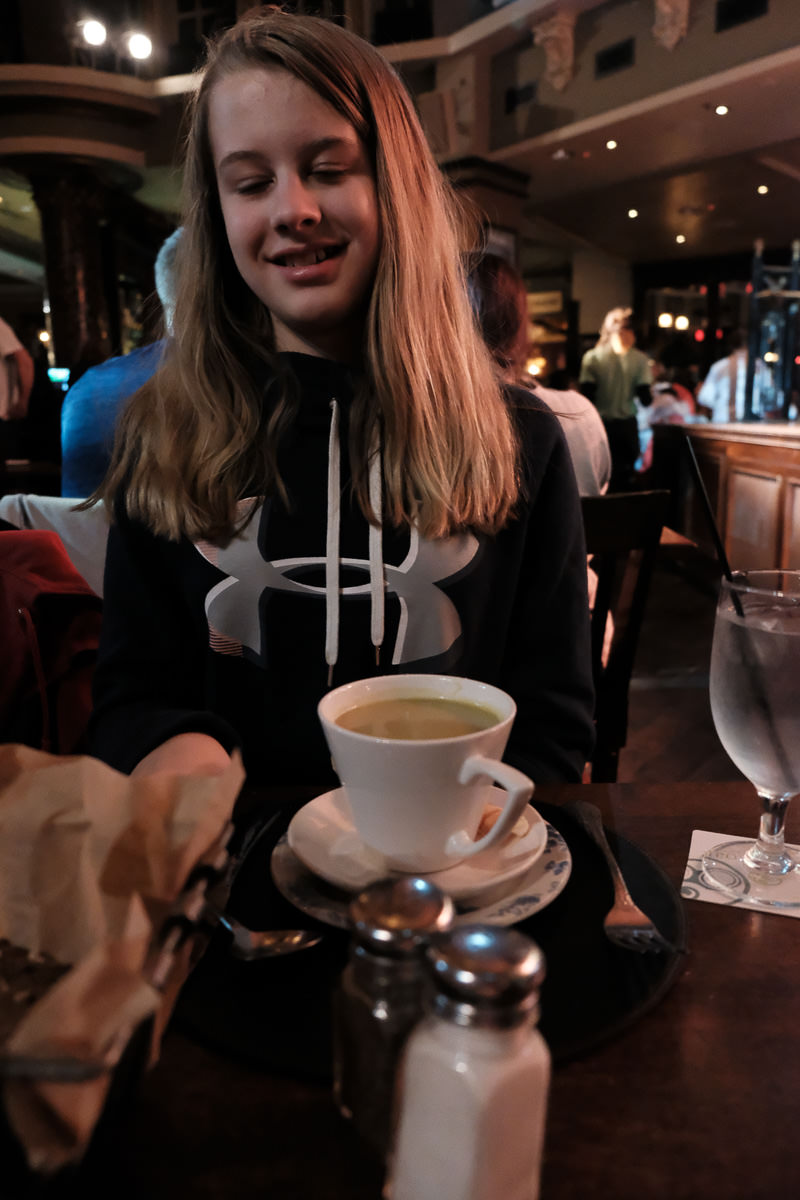 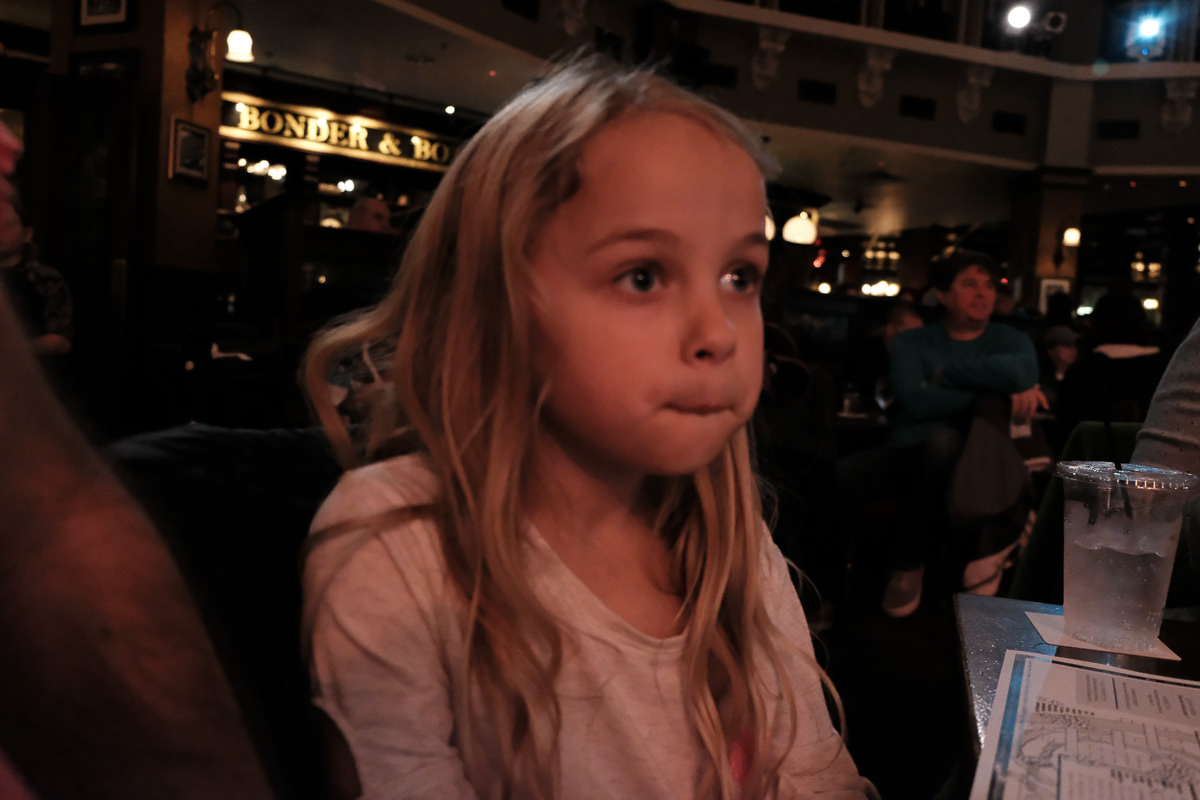 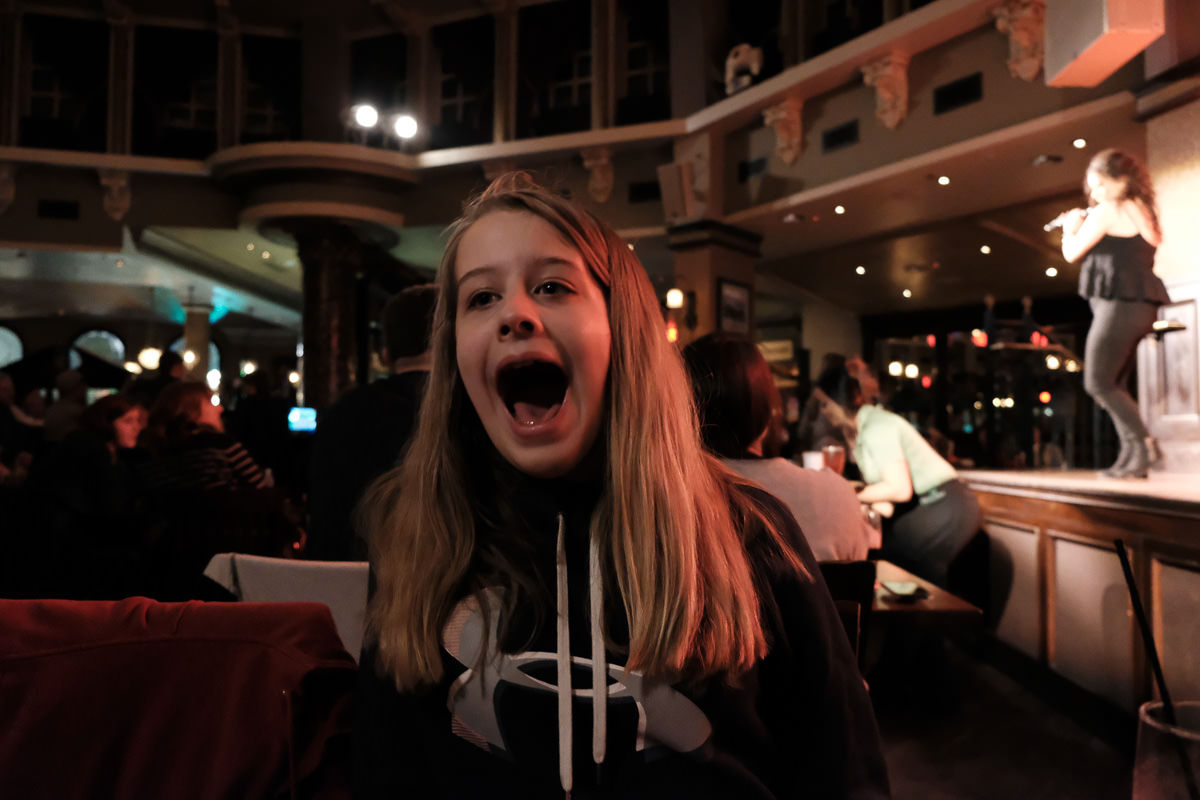 This time, we got a table right in front of the stage. The show was great, the food was great, and we clapped and sang our way through dinner, before making our way back to the car after a quick stop at the World of Coca Cola store so Leah could pick out a few small things.

We drove back to the house, and the girls explored, picked out their spots, and we all got sleep a bit after midnight.